"Red Mafiya: How the Russian Mob Has Invaded America" by Robert I. Friedman

A superb introduction to the new face of organized crime is rife with tales of amputation, castration and blood-sprayed trophy blonds. 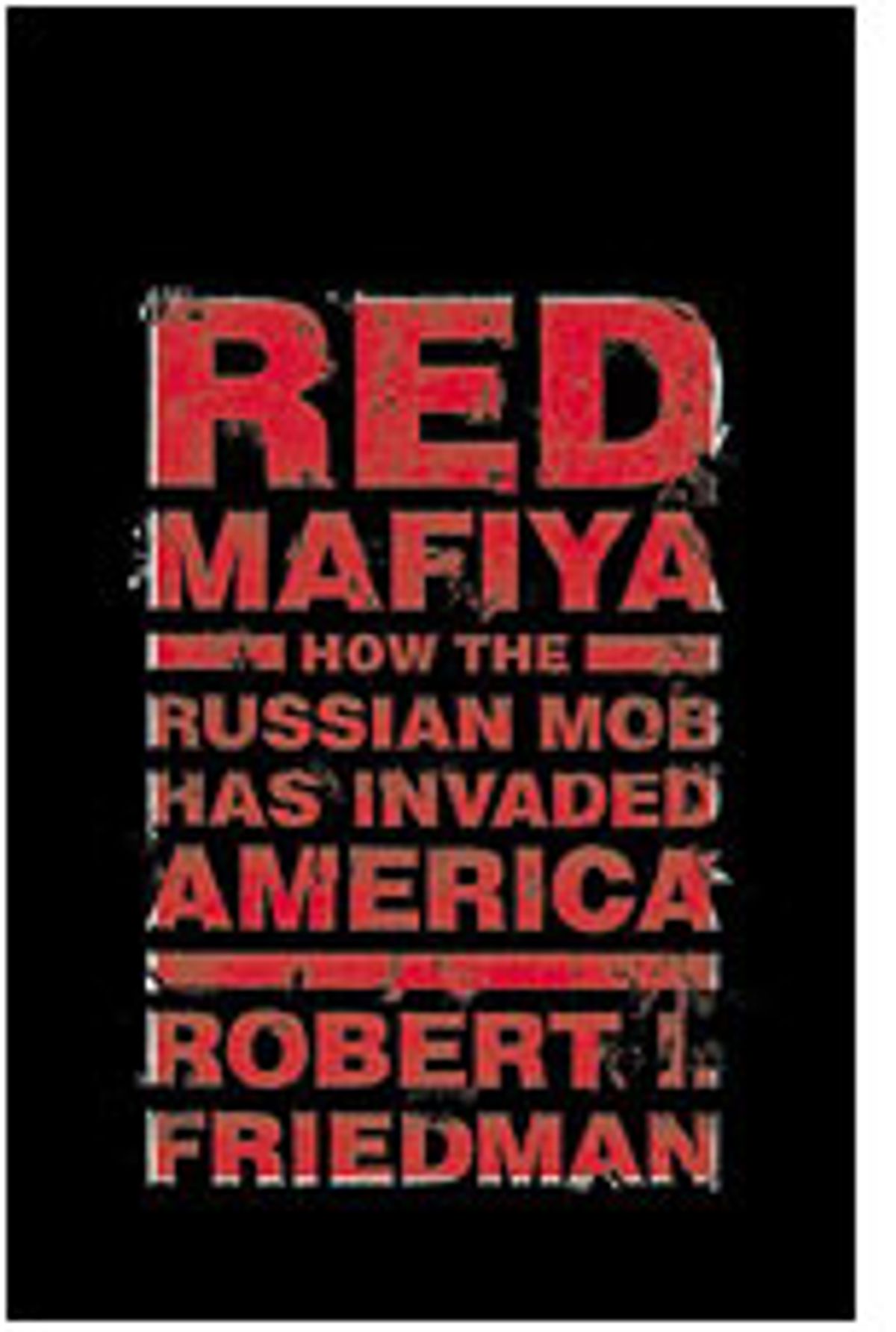 La Cosa Nostra means this "thing of ours," and the old-school Italian mob really does belong to all of us. We've kept our enemies so close through pop culture that we've graduated from dog-earing page 26 of "The Godfather" to name-checking godfathers in rap songs to eavesdropping on their shrink raps.

After you read "Red Mafiya," however, you'll know that such gangsta love is mere nostalgia. The real wiseguys are the strangers among us. Sometime in the '90s, the number of Russian mobsters in New York surpassed the head count of all five famiglias combined, and in this excellent primer by Robert I. Friedman, the don of investigative reporters, you'll learn why you should care. The Mafiya is into everything from Wall Street to African diamonds to tropical casinos to the NHL. Sophisticated, versatile and just plain huge, it has compromised governments and threatens the integrity of world banking. "The Italians play bocce," says one of Friedman's sources. "The Russians play chess."

Not only are the Russians smarter, they're meaner. The shorthand versions of some Friedman anecdotes follow: "Arm hacked off with ax." "Castrated with crescent-shaped knife." "Gutted like sheep." "Buried to the neck in gravel." "Forced to eat gravel." "Bit off booking sergeant's nose." The Russians are so hard-boiled it gives American cops the willies. One suspect chewed on bullets during a police interrogation. Another vocalized his contempt: "I did time on the Arctic Circle. Do you think anything you're going to do is going to bother me?"

These brand new heavies think globally. Friedman describes a 1995 confab in San Juan, Puerto Rico, where delegates from the North American and mother-country factions discussed, in the words of one, "who we will kill, fuck." A summit two years earlier was a conspiracy nut's dream. Chartered jets brought Sicilians, Russians and Colombians to Yerevan, Armenia, to divide up turf. All attending agreed that Russian banks should become their official money laundry. "The big joke at the Armenian conclave," writes Friedman, "was, 'Why rob a bank when you can own one?'"

The most fantastic tale of global cooperation involves helicopters, submarines and cocaine. In 1993, Ludwig "Tarzan" Fainberg brokered a deal between the Russian military and the Cali cartel for eight MI8 choppers. Tarzan forgot to bribe the right people, so to save his life, a Miami coke dealer had to fly to Moscow and impersonate Pablo Escobar. Impressed, the Russians feted the faux drug lord at a secret nightclub called the Kamikaze, where the black-market rich gathered to watch bareknuckled gladiators fight to the death. Blood sprayed the trophy blonds in the front row. The choppers made it to Colombia, but the DEA interrupted before Tarzan could deliver the next item on the shopping list: a Russian Navy submarine.

Criminal summits, death matches -- it all sounds like a straight-to-video flick, with thugs in ponytails and Armani, and an improbable international scrum of evildoers carving up the world. It seems like a fantasy, a synthesized, glossy counterpoint to the unglamorous dailiness of actual crime. But it's real; the Russians even have a "Die Hard"-y brain trust of techies tapping away in the lair of a mad genius. The Mafiya hires many underemployed chemists and computer jocks from the failed Soviet empire. Semion Mogilevich, the "Brainy Don," has a Ph.D. in economics. Those clichid bad-guy ponytails are another accurate detail -- they're a favorite fashion quirk of the vor, the Mafiya soldier. While we've been watching mob movies, the Russians have been living out the whole action genre.

The book's core strength lies in Friedman's eagerness to meet these vors face to face. He chats with Tarzan, Monya Elson, Marat Balagula, Evsei Agron, a full minyan of the mob aristocracy. Some are behind bars, others engaged in ongoing criminal enterprises. Some have sense enough to lie, others, unversed in omert` or the Fifth Amendment, don't care. They brag about shootings that would otherwise remain mysteries to law enforcement.

Considering what Friedman knows and the Mafiya's use of murder as cure-all -- no quaint code protects cops or journalists -- the mere existence of this book qualifies as foolhardy heroism. Thirteen reporters have been whacked in the past decade. Friedman opens "Red Mafiya" by describing the threats he's received, from a nasty valentine ("I will  make you suck my Russian DICK!") to a $100,000 contract on his life. But he's been risking his neck in this fashion for the past decade, because many of these chapters first appeared as magazine articles. He's been knocking on doors in Brighton Beach, N.Y., visiting gangsters in prison and generally making a pest of himself, as he admits. The result is an indispensable introduction to the new face of organized crime. Anyone tempted to emulate Friedman, however, should ponder the protection the FBI offered after informing him of the contract -- nothing. They suggested he "lie low." And a DEA agent chimed in with some advice: Buy a gun. A .357, specifically, because it doesn't jam that often.