The night I conceived, there was no light from the heavens, just weariness -- and that Barcelona music. 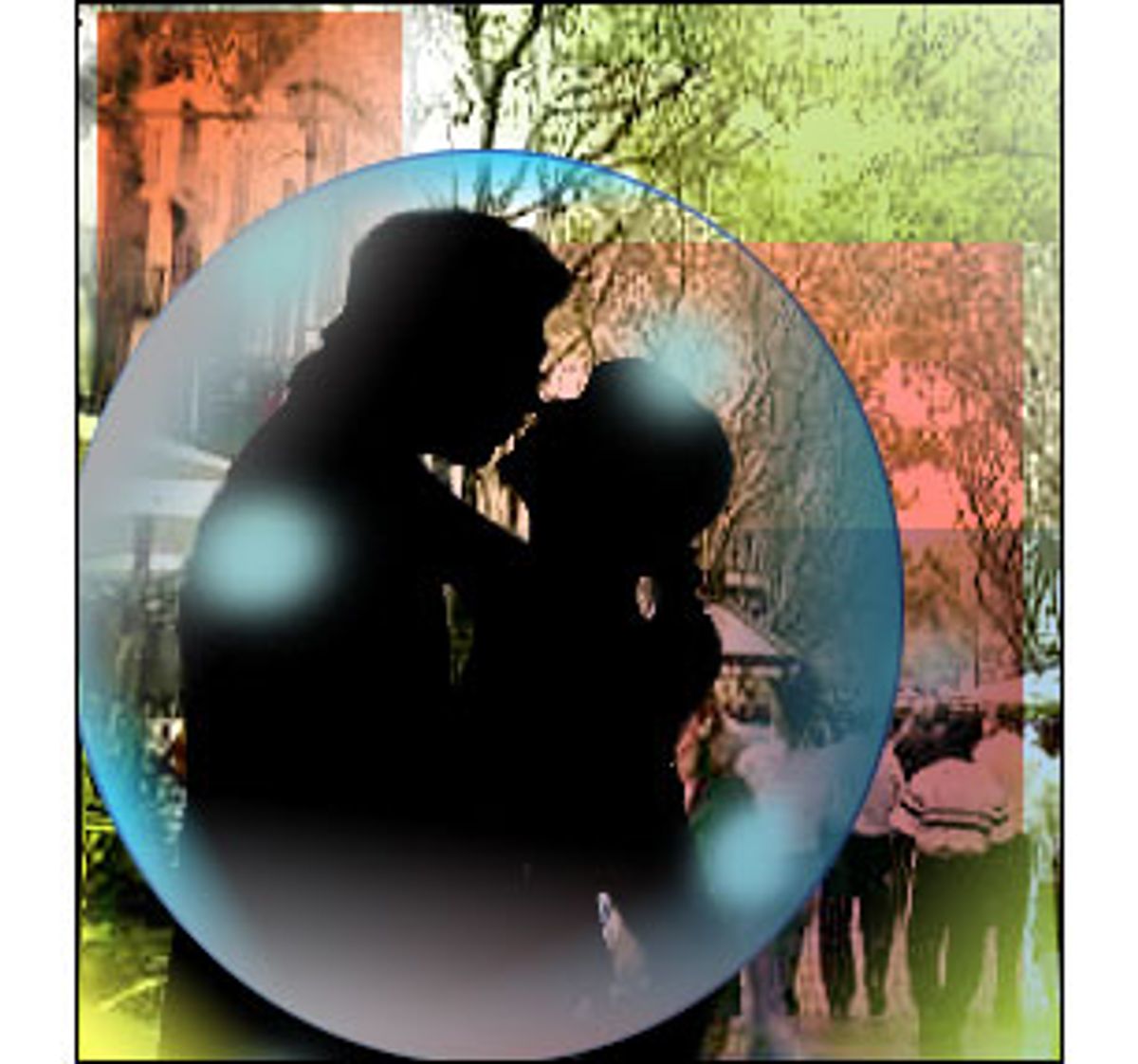 In Barcelona there was music everywhere. Whether it was street musicians clutching mottled saxophones or a melody piped in through the long wires extending precariously over the Spanish seaport's Gothic Quarter, there was always something in my ear to make me stop and listen, even if just to wonder where the hell it was coming from. The music was as pervasive as the stench of cigarettes in the closed spaces of the city -- more pleasant, of course, but just as there, an integral part of our explorations.

While I was listening to the music and staring at 100-year-old stones, Mario was girl-watching, although he complained that the women covered themselves up too much. What do you expect, sweetheart, it's November, I replied. Meanwhile, Spanish women strode by purposefully in leather jackets and beige plaid scarves -- Burberry's or the cheaper knockoffs, it was hard to tell.

Everyone in the city was wearing that beige plaid scarf. Mario and I made a pact to kiss every time we saw the scarf, and as a result we missed most of the sights. After I left, Mario told me that he was still instinctively turning to his right when he saw the scarf, expecting to find me in my blue winter coat, my lips pursed and ready. He described the sadness that he felt when his own lips met empty air.

The night I'm pretty sure I got pregnant, we went drinking at an Irish pub located on one of the Gothic Quarter's narrow stone streets. Before leaving for the pub, Mario and I had fought about the usual issues, then wearily made up. During the walk I hung in the back of the group, too spent to make small talk. Mario's classmates ambled on ahead, chattering in German, Catalan and Spanish. Mario kept a protective hand on my arm. He was convinced I had a crush on one of the German guys, not realizing that I'd grown up with blond, blue-eyed hunks in Minnesota and was now thoroughly sick of them.

The pub was a typical mixture of chrome and beer; if not for the picture window offering a view of the neighborhood, I would have forgotten what city I was in. I don't know why Irish pubs are so prevalent no matter where I visit -- Berkeley, Calif., Peru and now Spain. The waitress didn't speak Spanish or Catalan, or German for that matter; luckily, everyone at the table knew English, so getting alcohol wasn't a problem.

We drank Red Stripe because it was the cheapest, even though it came from the farthest away. The conversation focused less on classes than I would have thought, although a printout of the schedule for the next quarter did make its way around the table. For the millionth time that week, I wished I were back in school instead of in a tedious embassy job, the job that was supposed to be so full of adventure. A few glasses of beer made me more forgiving of my circumstances and more flirtatious with Mario; I began finding opportunities to brush my body against his. When his roommates left the pub, they jokingly warned us to keep the noise down when we finally arrived home.

I remember stumbling home with Mario a few hours later, drunkenly embracing each other in various alleyways and making a special effort to keep our lovemaking down to acceptable decibels once we were in bed. What I don't remember is a flash of realization, or a light coming down from the heavens, which is what I'd assumed would happen on the day I conceived. There was only weariness and discomfort from sleeping on the sliver of sweaty, coffin-size cot generously provided by my snoring fianci.

The next day Mario and I went back to the Gothic Quarter and wandered through a 12th century cathedral, staring at the pasty saints and virgins and drinking from a fountain reputed to have curative properties. By the time we emerged, it was dusk and lights were glowing in the twisted, slender arches of the cathedral. At the bottom of the steps a man played slow jazz on an electronic keyboard. The lingering notes echoed off the stone walls as darkness gripped the plaza like a fist.

A few weeks later the music would come back to me, along with the inexplicable shiver of foreboding that went through me as I stood in the plaza at dusk. That evening, however, I merely shook my head, caught a glimpse of beige plaid clinging to a Spanish neck and leaned toward Mario for another kiss.

Michele Back is a Foreign Service officer working at the U.S. Embassy in Lima, Peru. Before that she worked as a travel writer and editor for Fodor's Berkeley Guides in Mexico and Costa Rica.

MORE FROM Michele Back