Perhaps I could learn a thing or two about women from Matthew McConaughey. Nah. 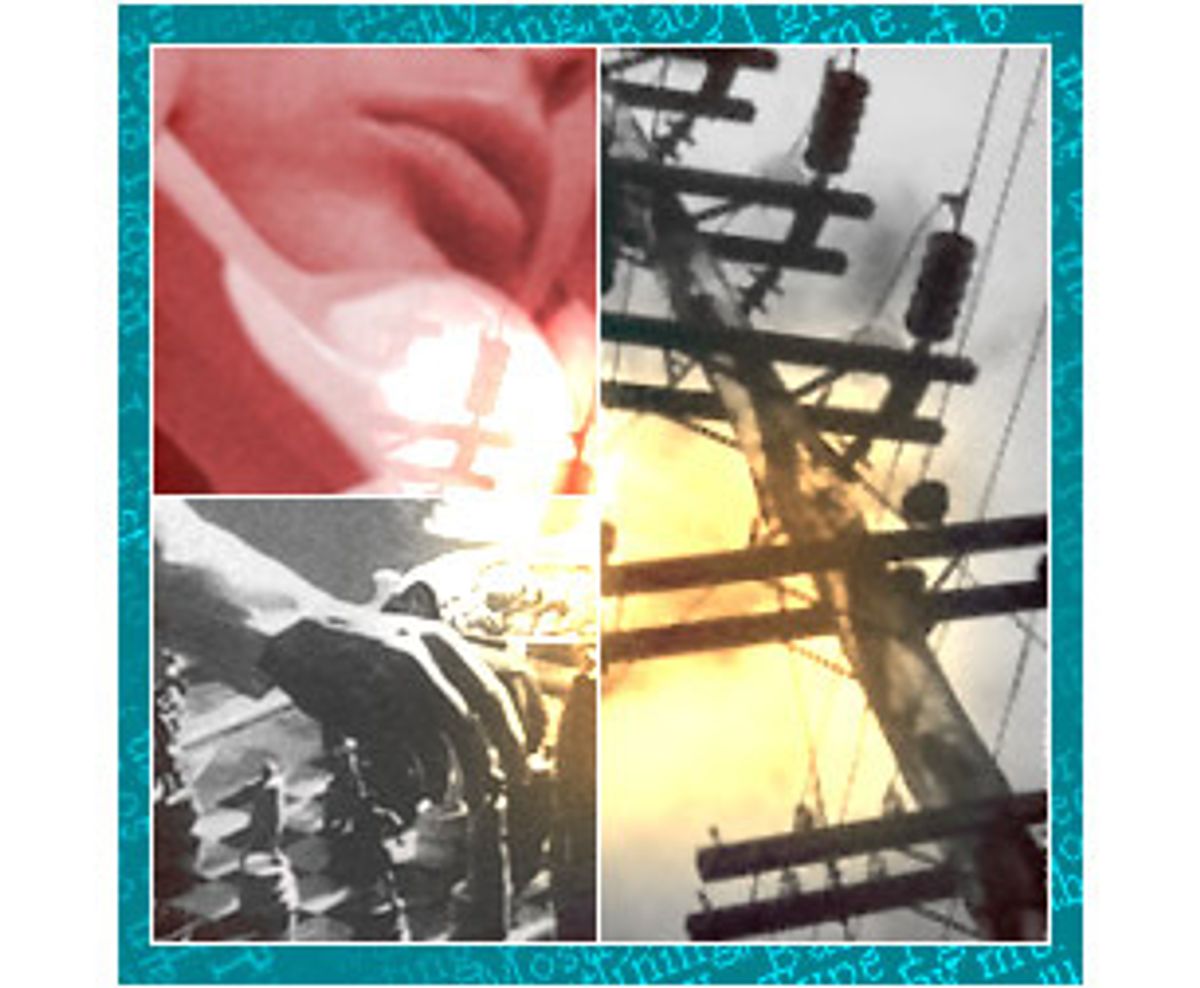 Something gives way in my head when I go to Hawaii. Something about traveling over water allows me to divorce myself from my mainland concerns almost instantly, which is good, because at present I have a large number of mainland concerns. Primarily, and trust me I hate to say this, I think it might be time for Bachelor No. 1 to settle down and get serious with just one woman. The problem is, women are tricky.

In my younger, more naive days, I thought there was only one type of woman. We went out, spent some time together, then she, unfairly or not, started expecting emotional responsibility on my part. Either I was up to this challenge or I wasn't. Mostly, I wasn't. So, in order to avoid this, I kicked off all relationships by clearly outlining my main objective: to remain emotionally irresponsible. I would usually say, "Baby, I am so far from being ready for a relationship!" If she was what I called a Type I girl, then she'd say goodbye. However, another type of girl said, "Oh, that's fine by me. I don't want you as a boyfriend. I don't want you calling me every day. We can just be friends and hang out." I called her a Type II girl.

At first, you love the Type II girl. You think, "She is the perfect woman. She gives me space; she's easygoing. I don't have to call her all the time." So what do you do? Because she's so great, you spend more and more time with her, thinking all the while that she knows the score. And does she? You bet your ass she does -- better than you. After several weeks of thinking you have beaten the system, she says to you, "It's about time you took some emotional responsibility." And you say, "Baby, I thought you didn't want a boyfriend and all that nonsense." And she says, "I didn't, but then we started spending so much time together ..."

So what's a man to do? Perhaps I could learn a thing or two from Matthew McConaughey.

You see, we had a little going-away party for one of the editors for "South Park." His name is Gian, and he loves Hooters. In fact, he loves Hooters so much that although he is not a small man, he custom-made himself a disturbingly form-fitting Hooters girl outfit for Halloween. So, in Gian's honor, we had the Hooters girls in their skimpy outfits come to the office with a bunch of chicken wings, and it all made for a swell goodbye.

Of the three Hooters girls working the party, two were cute and the third was hot (hotchkey is the preferred term). So who should Trey have under his arm at a party later that evening but hotchkey Hooters girl No. 3. And there they are, chilling on the sofa, when who should come strolling by but Mr. Nude Bongos himself, McConaughey. Well, he spots the little hotchkey, stops, turns to face her. He steps in front of her to be certain she is paying attention to him. She and Trey look up. Then Mr. M. pulls what I can only imagine is his patented move: Without saying a word, he cocks his head suggestively, then runs his hands through the air down either side of his body as would a model presenting the dress she has on. That's it. He simply believes the silent presentation of his Matthew McConaughey self can lure her away. Well, wise, young hotchkey is not having any of it. With a look of disbelief at the utter lameness of what I shall henceforth call the Matthew McConaughey maneuver (3M), she turns back to Trey, and they immediately pick up their conversation where it had left off. Then, as a dejected M.M. walks away Trey shouts, "You're all washed up, Matthew McConaughey!"

Ask yourself, how can a man ever read a woman? A man who thinks he can is a man who knows nothing.

-- Robert Evans, "The Kid Stays in the Picture"

Here we go. Here's some advice on women I can sink my teeth into. Either way, I don't know anything, so the pressure's off. And who better to get it from than the Hollywood bad boy himself, Robert Evans. (Evans, in case you don't know, ran production at Paramount Pictures for many years and produced, among other things, "The Godfather" and "Chinatown.") This guy's autobiography is gripping, and his exploits make McConaughey's naked bongo incident seem like afternoon tea.

On the other hand, he hit 4 for 4 in divorce court.

So maybe he's not the guy one should look to for advice on relationships, either. However, if you want to know something about Hollywood and the way things work, read his book. Better yet, listen to the tapes. Evans' voice will haunt you in your sleep. I got the tapes last week as a gift from "South Park" writer Pam Brady. (We call her Pam Gravy 'cause she goes good with everything.) Within two days I was on the phone with her, demanding a copy of the unabridged book, which I couldn't find in any local bookstores and didn't want to wait for on order.

Did she have an in? You bet she did. A few months back she and a friend had approached Evans with the idea of doing a documentary about his life. Well, from all indications in the writing, Evans is a pretty reclusive guy. But he can smell talent a mile away. In one story, he tells of looking at some film of an actor his head of talent was trying to persuade him to cast in "On a Clear Day You Can See Forever." But Evans didn't bite on the lead guy. He wanted to meet the unknown kid in the background who didn't even have a line. Just the smile. The kid's name? Jack Nicholson.

So, as hesitant as Evans may have been about a documentary, Pam must have buried the needle on his talent detector. She's funnier than any woman I know. And equally sweet. And crafty. And she rides a Vespa scooter. So it was no surprise that when I met Pam at Factor's Famous Deli for a writers meeting last Friday, a fresh copy of the book was sitting in my place at the table.

"After you read it I'll get him to sign it for you." I love you, Pam Gravy!

It really is who you know. But the happy who-you-know stories are rare. It's a small town. Play it out and eventually some who-you-know will lead around to someone-who-doesn't-like-you. A friend of mine signed with a new agency and started taking meetings all over Hollywood. She was pitching her latest project to a producer and went on to explain how it would be different from all the bullshit movies that fell into the same genre. She tore into one movie in particular, performing a step-by-step evisceration of the film.

The producer's wife had written it.

Luckily, he appreciated her sense of honesty.

Well, I've gotten away from my original topic a bit. Or maybe not. Hollywood is a strange town. Trying to have a relationship out here is difficult because the whole place pulses with an anticipation of what's coming next, not what's happening in the moment. By the time the Oscars air, those films have been wrapped for a year. Everyone is on to the next thing. After watching Matt and Trey go around and around with Paramount producer Scott Rudin for months, it was difficult to get my head around the fact that, by the time the "South Park" movie premiered, Scott was already halfway through producing "Sleepy Hollow" (and certainly had several other projects in the works).

Maybe I just need to slow down a bit.

Trey's neighbor on Kauai, Kenny, and his wife moved there in 1970, lived in a tent under the bridge down the street for two months. Then they roofed a house for $2,000, bought a speedboat and began giving water-skiing lessons on the river. Thirty years later, they live in the same house, do the same thing every day, and they're as happy as clams.

Sounds pretty good. I don't mind camping, I've roofed a couple of houses and, with a little practice, I bet I could teach someone something about wakeboarding.

Perhaps what Foucault says about sex could also be said about a relationship in Hollywood. Or a movie. It is always better tomorrow.