As long as this lewd, crude, plotless wonder keeps careening along the open highway, it's all good. 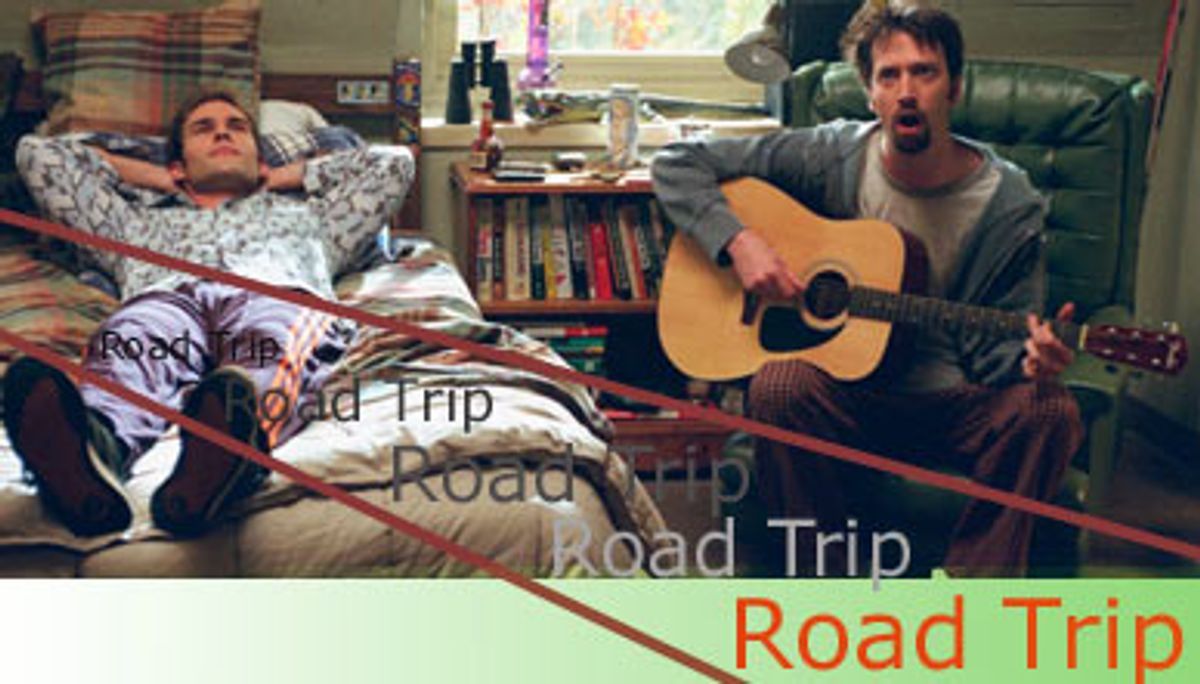 Yo. Wazzup? Wah-ZZUHP? ZAHHH! Make some noise for "Road Trip!" Hoo! Hoo! Hoo! Free money. Show me some love. I got nothin' but love. How y'all doin' tonight? Give it up for "Road Trip." Are you in or are you out?

That pretty much covers the range of appropriate responses to "Road Trip," a compact little collegiate farce that packs a haphazard assortment of cheerful gags and boyish horny-toad adventures into its modest frame. It certainly doesn't match the genre-establishing status of "National Lampoon's Animal House" or the giddy originality of "There's Something About Mary." But like last year's "American Pie," "Road Trip" crisply delivers the goods: vaguely rakish heroes, vaguely kinky sex and highly naked nubiles. Also a little song, a little dance, some French toast down a fat guy's pants. Multiplexes should be thronged with howling, high-fiving young men deep into summer.

"Road Trip" has nary a whiff of the portentous seriousness that sank such recent college films as "The Skulls" and "Gossip," and director and co-writer Todd Phillips understands that it's pointless to worry about whether his various more- or less-hilarious episodes actually add up to a plot. (They don't.) As long as he keeps his ill-fitting open-road foursome -- a regular Joe, a reprobate, a tortured genius and a hopeless geek -- careening from the school for the blind to the all-black fraternity to the sperm bank, it's all good.

This is Phillips' first feature film, but apparently he learned something from making the documentary "Frat House" for HBO (along with several other documentaries, including one, implausibly enough, about underground punk legend G.G. Allin). The photography by Mark Irwin is clean and straightforward, which comes as a relief in this age of wobble-cams, overexposed video and refrigerator lighting.

What's puzzling, though, is the presence of semifamous MTV comedian Tom Green, who is often amusing in his host/narrator role of Homer to the four Odyssean wanderers, but whose free-floating shtick has nothing to do with the already fragmentary story. You get the sense Green was available only for a day or two of shooting on one location, and the filmmakers had to squeeze him into the movie however they could. He plays Barry, an eighth-year undergrad leading a group of prospective students on a tour of the campus. Along the way, he begins to tell a story about four guys who drove down to Austin, Texas, to convince his tour charges that cool things do happen at the (nonexistent) University of Ithaca.

The film cuts to a dorm room just before the actual road trip. Barry's spiel for the students goes into voice-over. He introduces the bland but likable Josh (Breckin Meyer), who is concerned about the faithfulness of his redheaded cutie-pie, Tiffany (Rachel Blanchard), half a continent away at the equally nonexistent University of Austin. Unhappily, Josh has mailed Tiffany a videotape of himself romping with the undeniably delectable Beth (Amy Smart) instead of his intended tape of romantic baby talk and lame folk singing.

If Meyer looks like a thicker-set Noah Wyle (Dr. John Carter on "ER"), Seann William Scott, who plays his best buddy E.L. (and was just Sean W. Scott, without the second "n," in "American Pie"), looks and acts like the baby brother of Brad Pitt's "Fight Club" character. When Josh tells E.L. on the evening of his Beth liaison that he hasn't yet cheated on Tiffany, E.L. shakes his head sagely: "You're already cheating. Anytime you pass up sex, you're cheating on yourself." Later, when Josh realizes the missing sex tape has been mailed to Tiffany, E.L. protests: "That's not fair! How come she gets to see it and we don't?"

Naturally, these two determine that the only logical solution is a guerrilla raid to retrieve the tape before Tiffany returns to Austin from her grandfather's conveniently timed funeral. Also along for the ride is Paulo Costanzo, who's somewhere in John Turturro territory as Ruben, an anguished, possibly Jewish, intellectual whose angst can be controlled only with copious doses of weed.

But the real discovery in "Road Trip" is DJ Qualls as the coat-hanger-thin nerdoid Kyle, who gets to come along only because of his car and his dad's credit card. With his birdlike physique, permanent bedhead and Atari T-shirt, Kyle rides that razor edge between terminal hipness and fatal geekdom. Although Qualls is in his early 20s, he's one of those guys who could be 12 and could be 45; when Kyle finally cuts loose in a party at the black frat, Qualls' ecstatic, live-wire energy transforms the tiresome white-boys-get-down gag into a delirious, explosive extravaganza.

Not long after our four low-rent Kerouacs have left Ithaca, they've totally destroyed Kyle's car on a remote rural road, leading E.L. to announce, with a certain relish, "I'll give us five minutes until our first ass-raping." (This is an oddly prophetic remark, in his case, but I won't give away more than that.) As they struggle from station to station across the heartland, the camera occasionally cuts to Barry back in Ithaca, who is inexplicably fascinated with feeding a mouse to Ruben's pet snake. This extended gag goes absolutely nowhere, but without it "Road Trip" might be no longer than a typical episode of a WB prime-time drama.

Like all comedies of this ilk, "Road Trip" plays on the sexual and racial fears of its teen Caucasian audience; despite their purported rowdiness, our wandering foursome are both frightened and fascinated by aggressive women, people of color and taking it up the butt, not necessarily in that order. But it never condescends or tries to preach against sex, drugs or generalized hedonism, and it does a nice job of rewarding the characters it mocks (such as Kyle). If nothing else, director Phillips -- who gives himself a nice cameo as a foot-sucking creep who assaults Beth on a Greyhound bus -- has done a terrific service to any 13-year-olds sneaking into their first R-rated flick. They'll find "Road Trip" lewd, degenerate, sunnily amusing and full of gratuitous breasts. What more could they want?