Camera on a chip 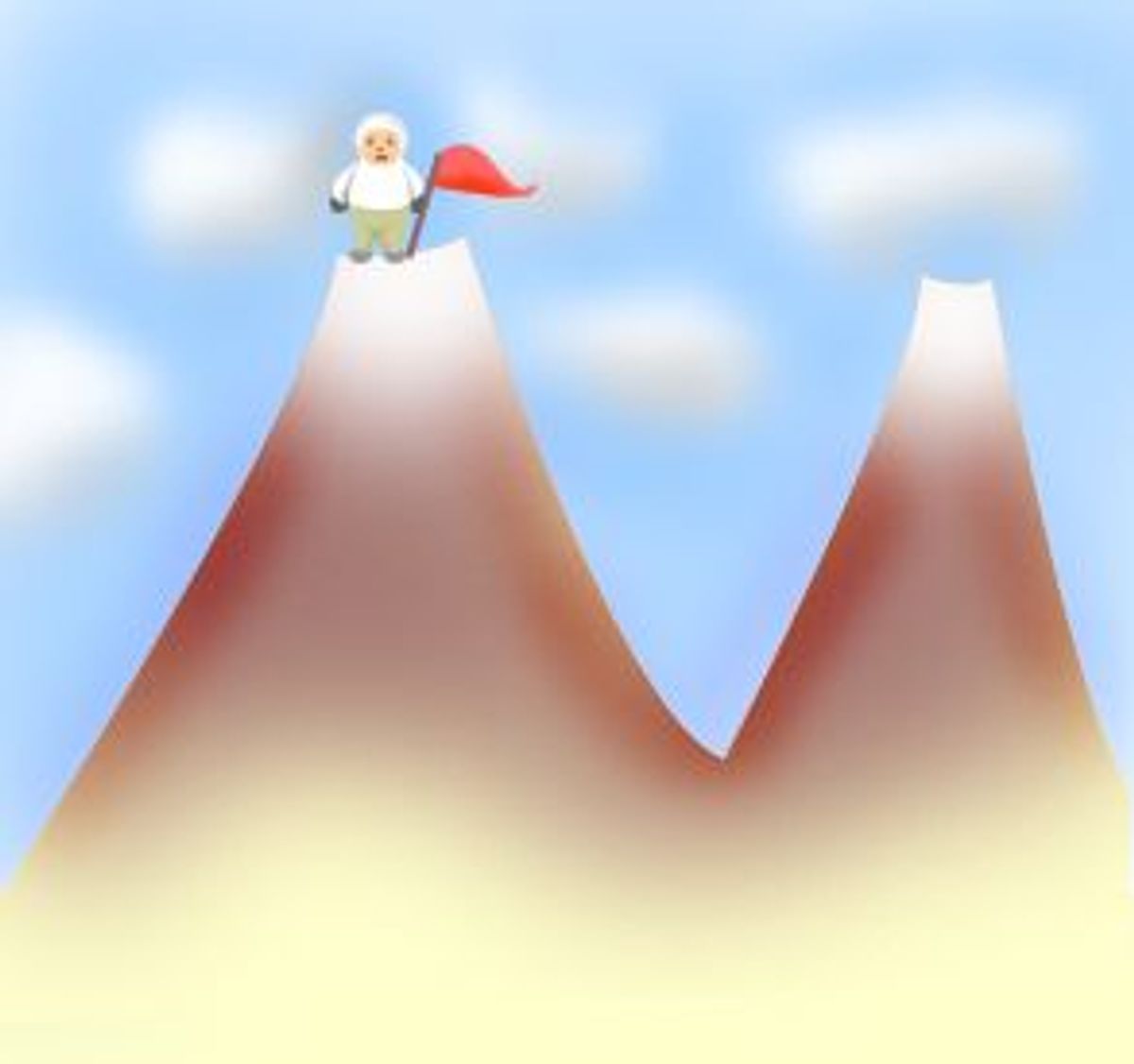 In the early '90s, a crack team of researchers at NASA's Jet Propulsion Laboratory (JPL) set out to dramatically advance the state of image-capture technology. Their goal: smaller, cheaper, faster image sensors that could work using less power than the CCD (charge-coupled device) chipsets that had been carried aboard all previous space missions.

It just so happens that that team, led by Eric Fossum, managed to hit a major home run -- exploiting standard CMOS technology to invent new "active pixel" image sensors capable of making a big difference not just for the fly boys but also for industry at large. Image sensors that came in smaller packages and drew less power enabled a host of new image-gathering possibilities for the space program -- and now appear to be driving a whole new generation of consumer electronics, medical imaging and machine devices to market.

The brass at JPL was so impressed by the new image sensors they awarded the NASA Group Achievement Award to the team, while Fossum himself was bestowed with promotions and honors in keeping with his accomplishments. But industry could barely stifle a yawn. People just didn't get it. And that, in turn, bemused and irked the scientists -- particularly Fossum and his wife, Sabrina Kemeny, who was also part of the JPL active-pixel development team. Ultimately, they and several other core members decided to look at this as an opportunity to get in touch with their inner entrepreneurs. The result is Photobit Corp., an up-and-coming "camera-on-a-chip" image-sensor maker situated in Pasadena, Calif. -- just a short Scud trajectory from JPL itself.

Kemeny, who runs the business, says the transition from white smocks to business suits hasn't proved to be traumatic at all, no doubt true since Photobit is now showing every sign of becoming a real player in the imaging industry.

For decades, digital imaging has evolved around the expanding capabilities of CCD chipsets. But then along comes this new CMOS "camera-on-a-chip" technology, which some say will transform the worlds of photography and video. What are the revolutionary differences?

Well, power, cost and accessibility; those are the three biggest. Reducing the power requirements is key for the wireless world, as well as for all other portable electronics. With CMOS image sensors, people can now have cameras on their wrists, on their laptops, on their PDAs, on their cellphones -- all because you can basically run a CMOS sensor off a watch battery.

The economic difference has to do with the fact that we can now produce high-quality images using standard CMOS and leverage off the multibillion-dollar CMOS fabrication industry. And that allows for low production costs.

But the thing that has really changed the face of imaging in recent years is access. In the not-so-distant past, the major Japanese camera suppliers -- companies like Sony, Panasonic, Sharp and Toshiba -- also made their own CCD image-sensor chipsets. So they were completely vertically integrated, building everything from the CCDs up through the optics to the full camera assemblies. And that meant new product development was basically determined by just a few companies. But the advent of CMOS image-sensor technology ... has opened up all that so other companies can compete on the basis of new innovations ... That's why Logitech and Intel and Kensington -- companies that really aren't your traditional camera companies -- now are able to enrich the field with all kinds of new solutions.

One other difference I should probably mention is that, much to my dismay, the cost of CCDs has also been forced down dramatically over the past few years. So even those customers that aren't buying CMOS are now able to buy CCD sensors at a much more reasonable price because of how CMOS has affected the market.

Tell us about some of the novel applications that CMOS image sensors make possible.

The whole biometric area is one that's up and coming. Fingerprint sensing, retinal scanning -- all that sort of thing for security devices. That could be big. Automotive is another huge area where we could eventually see a lot of activity. You might have sensors that help with collision avoidance, airbag sensing or even collecting black box information for insurance purposes. Even stupid little things like rearview sensing so people can avoid backing over their kid's bicycle.

Security is another promising area. For home security, you may someday have a half dozen cameras around the house, all hooked up to your PC. That way, you could call in from your computer at work to take a look at what's going on at home: nanny cams and all that sort of thing. And then there are many other possibilities, like Dick Tracy-type watches and cellphone cameras, which I suppose will probably prove to be more mainstream.

Just out of curiosity, why would you want a camera on your watch or your cellphone?

Once you're doing e-mail on your cellphone maybe you'll want to send an attachment saying: "Look where I am." So then you'll be able to take a picture and send it off as an attachment. For professionals like insurance adjusters and real estate people, that sort of capability would be really important. We can almost think of that as a digital still camera, but instead of storing the images right there, you'd end up transmitting them somewhere else for storage.

So you're also thinking of putting cameras in PDAs, right?

Yes, absolutely. And then there's lots of other applications. Currently, you see all kinds of scanners that use both linear arrays and area arrays. When you go to the supermarket, all the bar-code scanners use CCDs now. So that's another promising area for CMOS penetration.

You seem quite confident about your ability to beat all your CMOS competitors. Why is that?

Well, we do have the highest-quality sensors and we also have the dominant intellectual property position, as indicated by our very strong patent portfolio. We have the exclusive license to the original patented work we developed while working at NASA. And then, in addition to that, we have a huge portfolio of image processors generated by Photobit engineers and scientists.

The core of your engineering team came from the Jet Propulsion Labs group that invented the "active pixel" technology that you've since commercialized. So, in a way, you all made the jump from rocket scientists to industrialists. Any regrets?

No. It's very exciting being in the real world of business and affecting everyday life on a grand scale. And you also get to be very creative in the way you strike business agreements with various partners.

What initially convinced you to take the plunge? Was it just because your husband [Fossum is now Photobit's chairman and chief scientist] was the person who actually invented the technology?

It was a combination of things, the most important being the realization that there was a tremendous commercial potential to this new technology. That really spoke to my own entrepreneurial spirit, which has always been part of my personality. And another factor was that Eric felt especially frustrated at the business community's initial reluctance to take up the technology.

So now you run the business and he handles the technology side. What do you talk about in the evenings?

We try to leave Photobit at work. We do, of course, have to talk about it at home from time to time. But we try to separate out the family life, especially when we're with our children.

Your Ph.D. work at Columbia was CCD-centric and you designed a CCD image sensor for the 1990 Mars Observer mission. Yet you come today not to praise CCD, but to bury it. Does that ever make you wince?

No, I think it's that background in solid state image sensors that enabled me and the other people here to succeed at what we're doing today. So all that CCD work is very much part and parcel of our success with active-pixel sensors. The breakthroughs we're achieving now have a lot to do with understanding all that we learned from going down a lot of blind alleys over the past 30 years of CCD research. Learn the lessons of history, and it will make you strong.

In the consumer electronics field, there are plenty of examples that show technical superiority doesn't always lead directly to wins. Of course, the most celebrated instance of that would be Betamax vs. VHS. So given the current market presence of CCD, do you ever get the sinking feeling that big manufacturers like Sony and Matsushita might just end up looking right past your CMOS technology?

I think we're already past that point. The momentum is so strong right now for CMOS. Between our sales and that of our competitors, I'm fairly sure CMOS is closing in on 15 percent market penetration. And once you've claimed that much of the market, you're not going to go away.

So here we find American innovation eroding markets built by Sony and Matsushita on the strength of superior manufacturing. Is this just another cycle in that long-standing race between U.S. R&D and Japanese manufacturing? And, if so, doesn't that suggest the Japanese consumer electronics manufacturers are just going to turn around and take over the CMOS market sooner or later?

Well, that certainly was the CCD story. Will it happen again? I think it's hard to say. Will the Japanese be involved? Yes. I don't think they're going to give up the imaging business. I think there will be a shakeout in the image-sensor business and I expect Photobit will be among the top three or four companies that survive. But I also think that among the other survivors, there will be some Japanese companies. I don't see Sony giving up its position.

That may be true for some of our competitors, but not for us. That is, the quality we've been able to achieve here is fully on par with CCDs. And CCD imaging has achieved a very high quality. There's no doubt about that. They've had 30 years to perfect it and they've done a really good job in a number of areas. But basically, when we have visitors who are savvy in the technology, their mouths just drop when we show them what we're capable of doing. We've been plagued by the bad reputation earned by some of our competitors, especially in earlier years.

Having said all that, there still are a couple of parameters where we keep on struggling to meet the quality of CCDs. But there also are other areas where we excel. For instance, there's something called "blooming," which you've probably seen on TV. That's where a very bright light source ends up creating a big, white streak across an image. With CMOS sensors, you have a natural anti-blooming, so you don't get that. Also, we have almost no lag.

What are the areas where you're still struggling to improve?

In very low light imaging, the sensitivity for very small pixels is difficult to achieve at a low cost. That's challenging for CCDs too, by the way, but they have a more mature manufacturing process that helps a bit.