The writer and star of "Dirty Blonde" talks about channeling Mae West and the uses of celebrity worship. 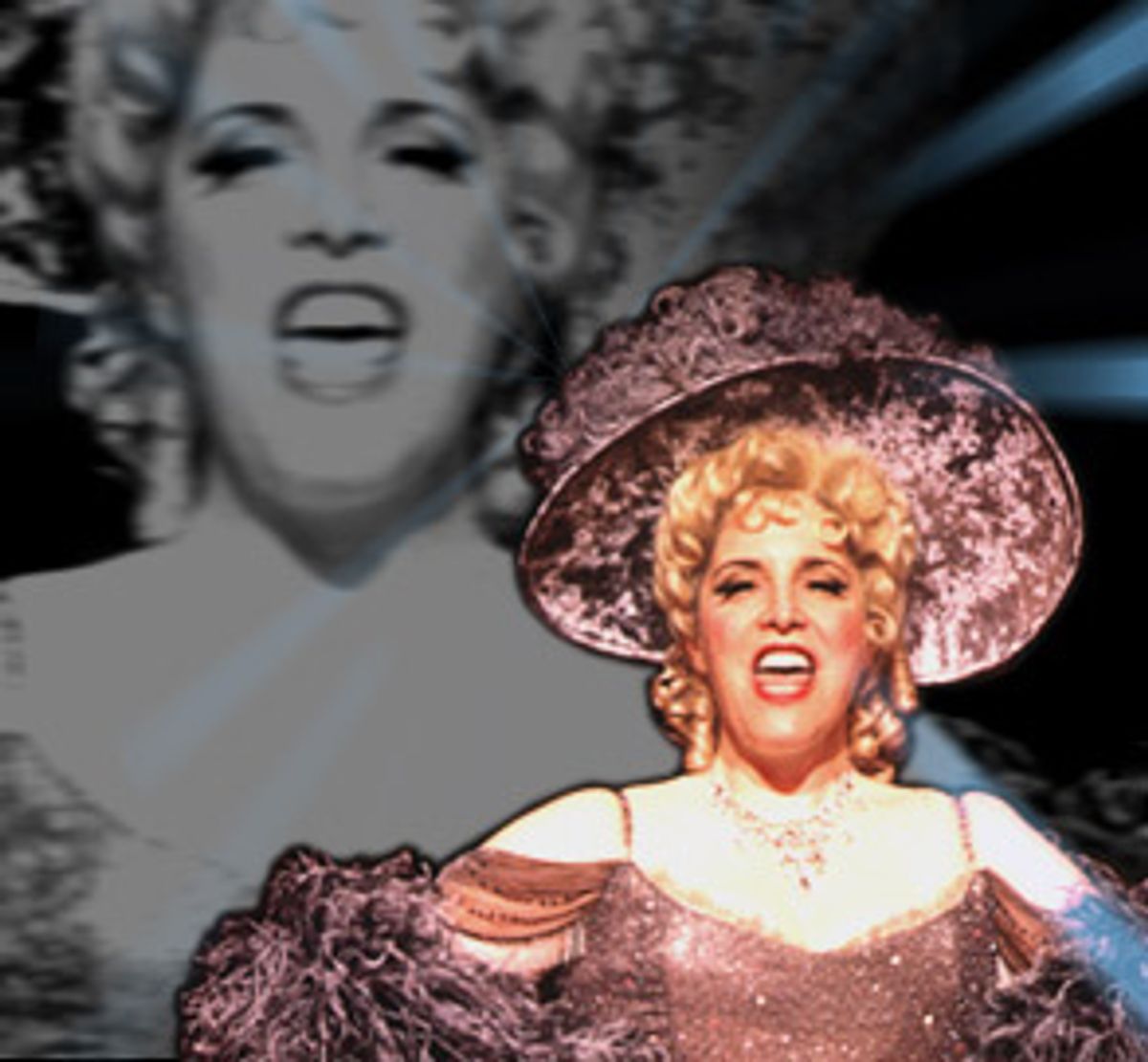 Mae West is headed for her longest run on Broadway
since her own play "Sex" landed her in jail
on obscenity charges in 1927.

Actress and playwright Claudia Shear re-incarnates the original Hollywood
diva to hilarious effect in her new Tony Award-nominated play, "Dirty
Blonde," which chronicles the rise of Mae West from second-tier vaudevillian
to full-fledged star. West accomplished this feat by adopting her now-famous
parody of sexy persona and confounding Hays-era censors with a
suggestiveness they couldn't quite get their code around.

Forget about Madonna's chameleonic transformations, Mae West figured out
her magic formula and then packaged and preserved it the way Procter &
Gamble might have, forever. She even turned down the Norma Desmond role
in "Sunset Boulevard" to keep the legend intact. West also knew her
audience: In 1971, the 78-year-old legend told Playboy magazine that
"camp" could be defined as "the kinda comedy where they imitate me."

Shear plays both Mae West and Jo, an out-of-work actress, who meets
Charlie, a movie archives librarian (played with comic sweetness by Kevin
Chamberlin), while laying flowers at West's crypt in a Queens, N.Y., cemetery.
The two tentative soulmates bond over a shared obsession with the actress
and find happiness by unleashing their "inner Mae Wests" in all her
taboo-busting sexuality and self-invented glory.

Shear, who also wrote "Dirty Blonde," already demonstrated her comedic
talents in "Blown Sideways Through Life," a one-woman show about holding
and losing 64 different jobs -- from law firm temp to whorehouse receptionist
-- before inventing steady work for herself in the theater.

Shear, like West, has made an asset out of setting herself apart from the
"clean blondes" of her era. From her "Dirty Girl" bubble bath in Brooklyn, N.Y.,
Claudia Shear demonstrates that she has more in common with Mae West
than just their Brooklyn roots.

James Lapine, who
is a very famous theater director and writer, called me on the phone and
said, "Would you like to work on a project with me?" And then he said the
words "Mae West," and I really did feel a thrill go through my body and I
thought, my God! Why didn't I ever think of that?

It really is a perfect fit for you. You seem to have inhabited her.

They would laugh in rehearsal, I will say. Kevin turned to me one day and
said, "It's like you're channeling her." One of my favorite lines in the play --
not that you should quote yourself, it's so irky -- is "Obsession grants the
patience to really fine-tune the details."

That's what people say, but I never analyzed it to that point. I think what it
celebrates is not celebrity worship, it's really the obsession with anything. It
just happens to be celebrity worship. To me obsession is a grand thing, and I
don't mean where you get into madness, but obsession in its most wonderful
way is very pure, because it is something that does not involve you and your
ego. If you are obsessed by Buster Keaton, it's not about you, who you are,
how much money you have, what your thighs look like, what you got, what
somebody else didn't get -- it's about Buster Keaton. There's nothing I can't
become obsessed with; it's just that the obsession happens to be Mae
West.

Is there something particular about Mae West's persona that frees
Charlie and Jo from their earnestness and their self-imposed exile from
society?

When I was writing the play, if I wrote something that James thought was
really spelled out, he would tap his nose. I spent two and a half years
writing the play so it wouldn't be too on the nose, so I'm not going to now sit
in interviews and explain the whole goddamned thing away.

Mae was very obsessed with colonics. That's totally true. Once, she was at
some Hollywood mogul's house with the Hollywood mogul's wife and she told
her that colonics would make it smell like hot soup when she went. She even
said it in her book, "Sex, Health & ESP," which must be read to be believed.
It has things in it about how to massage a man's prostate with a condom on
your finger. I didn't even put that in the play. Okay? Okay.

It was great to see the history of how Mae West invented the "Mae
West" persona for herself as well.

Absolutely, absolutely. She tried everything. She was the nut case, the "it"
girl, the Eva Tanguay type. She would do everything in vaudeville -- and it
just didn't work.

Why do you think this persona stuck?

I think because her sexuality was very predatory, very masculine and when
she put on her mother's clothing, so to speak, when she put on the Gay '90s
thing, it gave it a nostalgic tint. What is it that John Fowles said? "The past is
a different country, they think differently there." It was a different country
that she was living in, so they could accept what she was like more. And on a
purely pedestrian level, she just looked better in the dress. I mean, you
couldn't really find anything that I'd look worse in than a flapper-style 1920's
dress.

One of the things that you always hear people say
about Mae West is that she is a female female impersonator.

People always say that, but I don't quite get it. I think it's because she walks
like a truck driver with hips, God bless her, I love that. And she does hit
people, which I find incredibly fabulous. And of course my favorite thing about
Mae West is that she actually spits on someone. She does it in "I'm No
Angel." I tried to work that into the play until James said, "Claudia, would
you let it go please, let it go, because it isn't going in, we can't fit it in." I
can't tell you how much I loved that. I don't think you can find another
Hollywood icon who takes a mouthful of water and spits it down someone's
back.

She just broke all boundaries.

I don't think there were boundaries. You had to remember that this was a
woman who by the age of God-knows-what, was in vaudeville. And like
Keaton and Chaplin and the Marx Brothers, when you came up through
vaudeville you had one tenet of existence: Does it work? Did you hit it right?
Did you get the laugh?

Speaking of hitting it, one moment in the play that definitely worked,
despite how jaded we've become to nudity ...

The booby! The booby! Thank you, thank you! When I was writing the play, I
did a lot of primary research, and many of the reviews in Variety at the time
talked about how "she was fiddling with her dress strap" and how "the
dcolletage [was] too much" and how she drove the Yale boys wild and they
tore the theater apart screaming, "Boola, boola!" And I'm thinking, what in
the hell did she do? By our standards today, it was probably tame. I didn't
want to do a "mother wore tights" sort of thing of like, "Here's my ankle,
oooh! It's shocking!" So how could I actually show that she shocked people?
Well, I thought, "You gotta show some pink." And they don't expect me to do
it because I'm not some 20-year-old dancer.

Living in Los Angeles, you get so accustomed to nudity having to look a
certain way, you see so many pairs of false breasts ... it begins to seem like
it's more about chattel than it is about sex.

You know, that's why you have to go to Paris or London. It's just about
being female. You're at a party, they're there to have as much drink and sex
as possible. And they're not looking for the girl who has the most toned
upper arm. Which I find much healthier frankly, not that you should be drunk
and have casual sex, I'm not propounding that, but I think New York and L.A.
to some extent are all about "Are you beautiful?" "Who are you?" "Do you
make a lot of money?" Oh fuck off! Are you gonna have fun? Are you gonna
get tipsy at a party and dance, or what? You know, I'm a party girl. I go
where the parties are. And I'm a horrible sofa whore.

Does that mean there isn't a sofa you haven't slept on?

You know, I really haven't traveled much. I haven't been able to. I go to
London, Paris and Rome. Those are the three places in my life where I have
lived and where I have friends. I have whole other lives, you might say.

Do you speak other languages?

I speak Italian and French. But badly, not so that people aren't wincing as I
do it at them. They sort of flinch as I speak French. Ouch. Some people will
say to me if they hear me speak Italian, "Oh, you speak beautiful Italian." I'll
say, "Do you speak Italian?" They'll say, "no," and then I'll say, "I'm
murdering it." But I get my point across and people are listening to the
sound of my voice, which just drove me to learn other languages.

Your voice is certainly being heard. The theater was packed the other
night.

Packed! Packed! We're packed! We had a cancellation line last night. I think
that Lapine would probably hate for me to say this, but then again he
doesn't like much. And I feel very arrogant saying this, because he is a great
man and I am but an egg, but Lapine and I were in many ways a great
match, because we are the most opposite people imaginable. We're a
perfect mix of the Apollonian and the Dionysian, you might say.

Well the head and the heart, just more pretentious.

You're Dionysus, I presume?

Ohhhhhh. I'm totally Dionysus, terribly. Well, as much as anybody is totally
anything, because if I were that Dionysian, then I would have no brain at all.
And if he were that Apollonian, then he'd have no feeling, which sometimes, I
suspect. No, I'm just teasing.

Well he wouldn't appreciate the Dionysian, if he were entirely Apollonian.

That's right, why would he pick me if he knew that I was going to drive him
crazy?

Are you loving your life in the theater?

Oh I love my life, I love being in the theater. Doing it is one thing. It's being
backstage that is the most fun. They make me just wet myself. Nobody talks
about that because it's not the glamour part, but your dresser, the guys
back stage, the stage manager, your assistant stage manager, the jokes
that everybody has. It's a little heightened, it's a little pumped up. It's just
so much fun.

Do you have a favorite Mae-ism?

With five Tony nominations for "Dirty Blonde," Claudia Shear is definitely
getting some.

Susan Emerling is a feature film and documentary writer who lives in New York and Los Angeles. Her most recent film, "Robert Zemeckis on Drinking, Drugging and Smoking in America: The Pursuit of Happiness" premiered on Showtime in September.