Blame it on Gisele 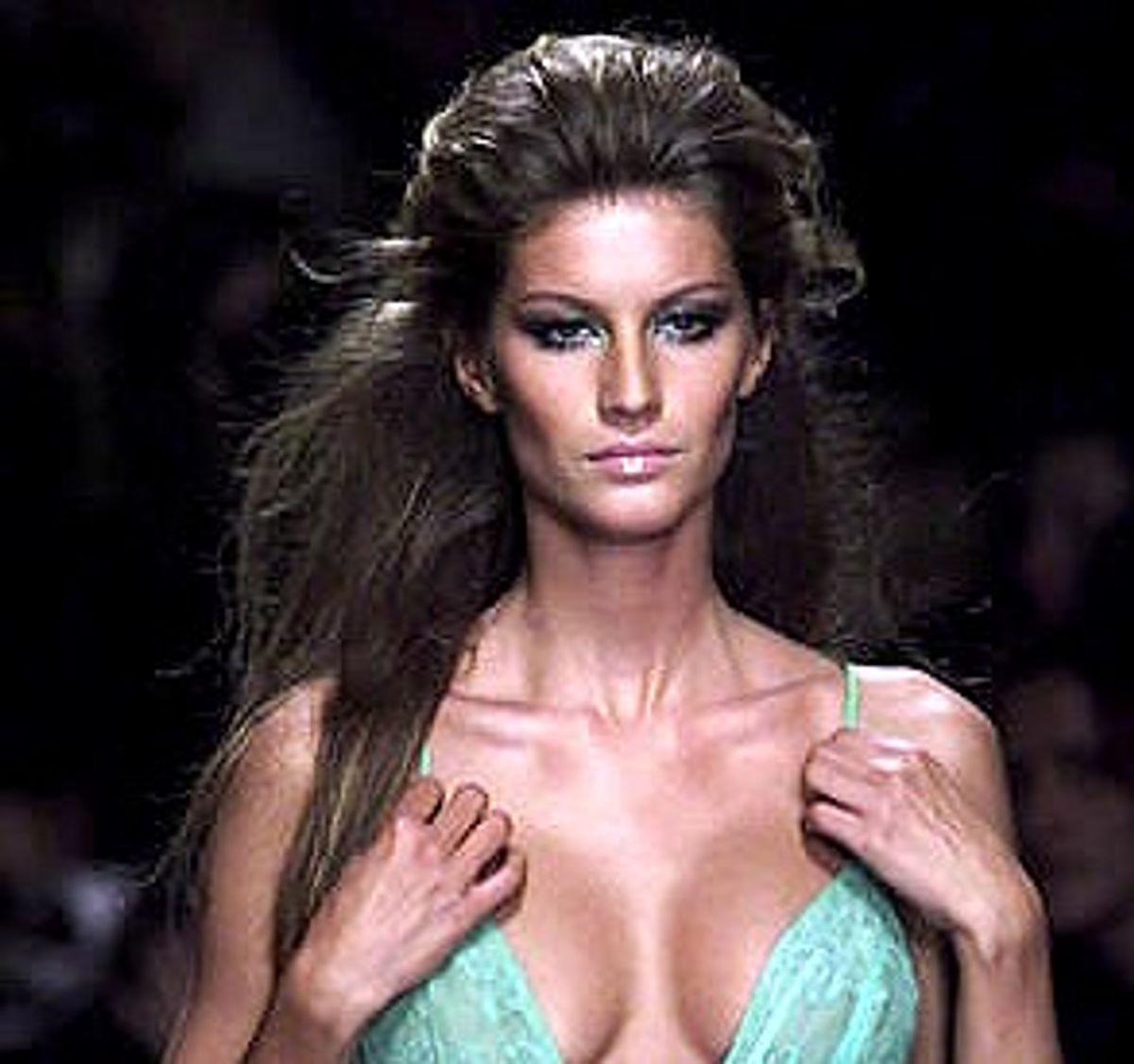 It's 10 p.m. on a blistering night in Manhattan. Churrascaria Plataforma, a new Brazilian restaurant in Midtown, is overbooked. The hostess sends a quartet of Gucci- and Prada-clad new media executives to the swarming bar for caipirinhas, Brazil's potent national drink, as tuxedoed waiters glide from table to table brandishing skewered meat -- chicken hearts, pork, flank steak -- slicing it high in front of slap-happy American patrons. Brazilians know the rules -- have a nibble at the salad bar, then turn the two-toned coin on your table to green. The meat keeps coming until the waiters see red. New Yorkers "don't know when to quit," sighs the hostess; they squat at the table for hours, then waddle out the door in agony.

Management has the same problem at Rio de Janeiro, a nearby restaurant, and Soho's Riodizio, two of the city's 25 Brazilian restaurants (there are many more Latin-themed eateries), eight of which have opened in the last 18 months. Their appeal -- all the rotisserie-roasted animal flesh you can stuff in your face for about $30 -- isn't limited to gluttons, Latins or those on the high-protein Atkins diet, however. David Rosengarten, co-host of the Food Network's "In Food Today" and a former restaurant reviewer for Gourmet, can land a table anywhere in town. On his nights off, he hits Churrascaria Plataforma. "All things Latin are very hot right now, and Brazil is the fresh face on the block." he says. "It's a culinary cross between mucho and macho."

"The caipirinha," he adds, sipping the margarita-like lime, booze and sugar concoction, "is the drink of the decade. It's made with a distillate called cachaca, from sugar cane, and the quality of the high is dizzying. One gets you buzzed off your can. After four, I'm hearing bossanova music, seeing palm trees sway and wishing I were dancing the samba with Carmen Miranda on the beach."

Restaurants and cocktails aren't the only Brazilian imports hitting Manhattan like a tsunami this summer. For the legions who can't afford a summer on Long Island, Brazilian dancing, food and drink is an escape, a way of thumbing ones nose at the Bobos (Bourgeois Bohemians) who flee the city each summer. What man would rather hang out at the Della Femina bar in East Hampton with horsey socialites when he could be dancing to Astrud Gilberto with a dark-eyed beauty at Via Brasil? And what woman would rather adopt the last decade's pale, crouched-waif look when she could be at Rio Chic, an instant billboard for fun, sun and surf (never mind that she shares a grim studio two blocks from Macy's and works 24/7 at a dot-com).

The Brazilian invasion began last winter during the New York and London fashion weeks. Twenty-year-old Gisele Bundchen emerged as the season's "It" girl, and she shows no sign of disappearing. Gisele, who is always referred to by her first name, is a Rapunzel-haired Sco Paulo-born Amazon with a feral face and a body that makes men and women cry, though for different reasons. She epitomizes the fashion industry's current obsession with the girls of Rio, Sco Paulo and -- judging from a recent issue of Vogue -- Ipanema. Her fcompatriots, Fernanda Tavares, Caroline Ribeiro and Fabiane Nunes, are also making a splash. All boast bronzed, sand-dusted skin and vaguely exotic (though not "too ethnic") faces.

Gisele, the current ruling face and body in the modeling world, commanded $7,000 a day to strut the runway last fall. She also boosted the career of designer Fause Haten, a fellow Brazilian, by romping free-of-charge in his pearl and sequin-embroidered pants and dresses, which are now selling out at Bergdorf's. Sco Paulo-based Alexandre Herchcovitch wowed the London fashion press; now his creations hang in the toniest shops in Europe, Japan and New York. "Ipanema Girl," a line of sexy, strappy footwear, is one of Bloomingdale's bestsellers this season.

Though it remains to be seen if the Brazilian look will last through the fall, Ribeiro and Tavares have both landed contracts with Ralph Lauren and Gucci, and Gisele graced the summer 2000 swimsuit issue covers of Vogue, Harper's Bazaar, Elle and W. Her status as the model of the moment was cemented last spring when the New York gossip pages caught her smooching Leonardo DiCaprio at Moomba. The late 1990s saw "the English girls, the Israeli girls and the Russian girls," says Marilyn Gaulthier, who owns the New York modeling agency Marilyn. "Now it's the Brazilian girls." Brazilian places seem to have similar allure; this spring, Harper's Bazaar, Vogue, Jane, Cosmopolitan and Elle set sexy multipage fashion shoots in Sco Paulo, Copacabana Beach, Sugarloaf Mountain and downtown Rio de Janeiro.

New York women who covet Brazilian women's "effortless" touch-me
sexiness are learning that less is more, at least when it comes to clothes,
makeup and body hair. The four Brazilian sisters who run the J. Sisters
International Salon can't keep up with the demand for their signature
Brazilian bikini wax. The $50 procedure leaves nothing but a thin landing
strip of hair, hidden by the floss-thin bikinis favored by Latin sunbathers. "I
estimate that 40 percent of the female population in New York between the
ages of 20 and 30 has a Brazilian wax," says Anne Breza, beauty director of
Self magazine. Fans include Gwyneth Paltrow, model Naomi Campbell and
Linda Wells, editor in chief of Allure, whose explicit editorial on the pleasures
of Brazilian bikini waxes may be her career's most memorable contribution.

At lunch at the Condi Nast cafeteria, young fashionistas concede Brazilian
beauty isn't as effortless as it looks. The wax is "more painful than childbirth,
embarrassing and expensive," says an editorial assistant at Vogue. Breza
adds that Brazilian women are oblivious to the fact that "the sun can kill
you." Which is why Sarah Nicholas, a pastry chef in Tribeca, spends $60 a
month having self-tanner professionally applied to her legs and arms at the
Elizabeth Arden salon. "Even if I never get to the beach, I want to look like I
live there," she says.

São Paulo-born Denis DeSilva, who owns Devachan Salon in Soho,
credits Gisele for his booming summer business; the "natural" look requires
upkeep that can cost hundreds of dollars a month. "Brazilian women don't
care about makeup, but they are obsessed with their hair. It must be long
until they turn 40, then they can go to shoulder length. They don't blow-dry
it, so there can't be any split ends. It is also very fashionable to have bright
highlights." Brazilian women are also meticulous about twice-weekly
manicures and pedicures, which can run up to $200 a month.

Despite the models' perfect bodies (Gisele's legs are skyscraper-high, her
stomach is concave and many wonder how non-silicone breasts can be that
perky), DeSilva insists that Brazilian men appreciate women in every shape
and size, as long as they show plenty of flesh. (In the local parlance, an ideal
figure is "guitar-shaped"; Americans seem to prefer the Pez-dispenser
model.) "When I go to the beaches in New York, I see so many huge bikinis,"
he says with a frown. "If American women could learn to be more free they
would be happier."

Real Brazilian women, by the way, are fed up with those who try to adopt
their look -- not to mention with men who see them as eroticized, brainless
objects, according to Rosaria, a makeup artist from the Rio de Janeiro
suburbs. (She did, however, affirm that she never has and never would cut
more than an inch off her lustrous hair. Below the waist, she was wearing
two 24-inch leather flaps stitched together with leather lacing. She called
them pants.)

Spencer, a commodities trader who lives near New York
University, is also fed up with uptight, high-maintenance New York women.
He worships Brazilian women's strutting, unself-conscious sexuality. He
wishes he could leave the city and spend the rest of his life on the beach. He
says he and his friends used to talk about getting married and settling down
back home on Long Island to raise a family. Now a common fantasy among
his friends: "Retiring early, moving to Rio de Janeiro and finding a nice girl."