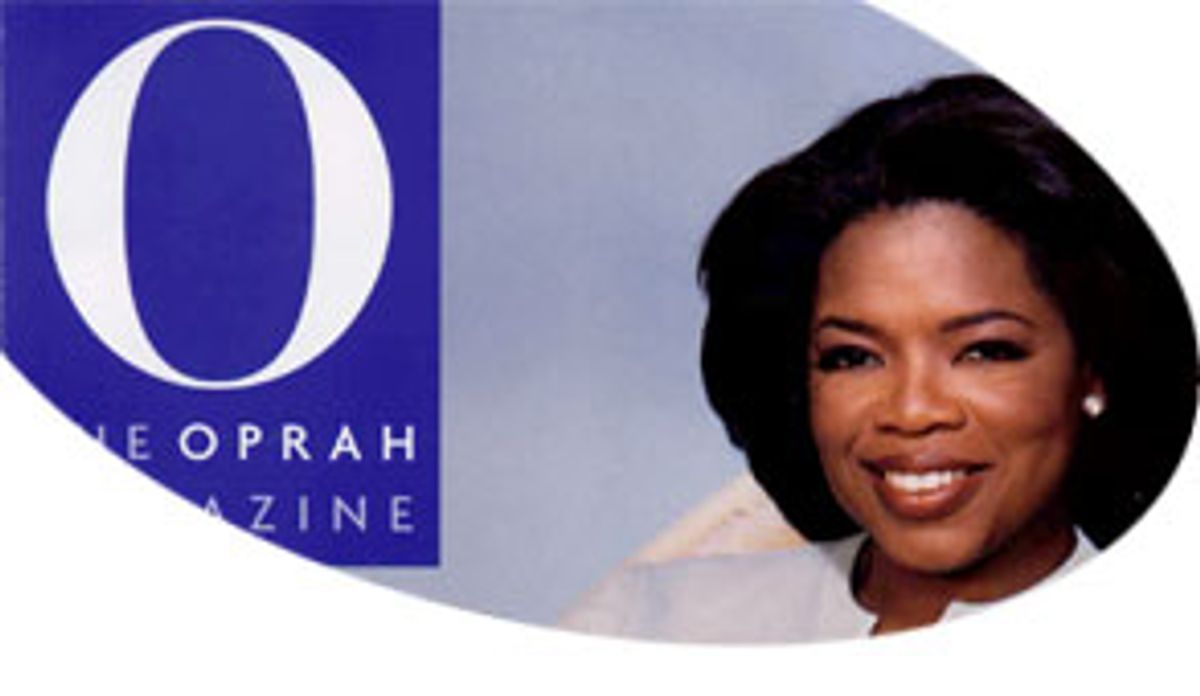 Hot off the presses, a slick full of soul, O magazine is the Oprah empire's
latest golden egg. With its much-heralded publication, the march to Oprah
omnipresence picks up the pace and we ask, "Can she do no wrong?" (The petty
among us inquire about her weight.)

I picked up O in an obedient trance, with high expectations. Could a million
Oprah Winfrey fans
(her syndicated show's average daily viewership) be wrong?

Well, yes and no. It seems that in the estimation of O itself, they are not
so much wrong as they are deeply flawed. The important thing, we learn, is
that they -- we -- are not irredeemable. The way of salvation is
conveniently arranged in the magazine's table of contents, where one finds
no fewer than 17 self-improvement articles designed to lift readers -- pry
them, if necessary -- out of the dumps, out of debt, out of ignorance and
out of whatever rut has waylaid them from their goals.

In this month's issue alone, O covers courage, perspective, ambition,
persistence, thrift, generosity, charity, industry, intuition, immediacy,
tolerance, serenity and integrity. That's enough self-improvement advice to
make everyone perfect. Unfortunately, the result of this editorial
generosity is a magazine best described as a pastiche of Glamour and New Age monthly Tricycle, an ultimately
depressing rag that falls prey to the excesses of both. Evidently, Oprah
wants her readers to serve a higher power and form a better society -- while
wearing capris, strappy mules and orange nail polish.

To be fair (not an attribute listed on this month's O agenda), I decided to
take on the therapeutic assignments with an open mind. This magazine is
nothing if not a tool, a prescription for contentment. I could hardly knock
it without trying it.

So I leapt into "This Month's Mission," dutifully "journaling" for courage,
filling out a fitness "contract" and asking myself to reveal my "deepest
desire." I stuck a rose in my tote bag to "Give [My]self Some Flowers," and
tamely "followed Oprah's lead" by posting the four pre-perforated
inspirational 3-by-5 cards provided by the magazine on my bathroom mirror.

Unfortunately, as seen through the O lens, all these good intentions tend to
blur until even Ralph Waldo Emerson ("What lies behind us and what lies
before us are tiny matters compared to what lies within us") winds up
sounding like a bad greeting card.

Nevertheless, I powered on, heeding multiple advice columns that suggested I
stop making loans to deadbeats and stop rewarding selfish, angry people --
which I took to mean that I should hide the magazine from my friends or no
one will lend me money anymore. Similarly confusing was the juxtaposition of
an article that encourages readers to spend a weekend on a girls-only
retreat with one that instructs us to save Sunday as "The Day Just for You."
I had to skip both concepts, since I didn't want to book a weekend with the
gals and then ignore them half the time.

I read "When Less Really Is More" (Page 106) and cleaned out my closets per
its instructions. Catharsis, as well as the virtue of charity, came with the
removal and subsequent donation of my old stiletto heels. Next, I digested
"Five Fabulous Things to Do With Fresh Strawberries," but choked on a New
Age bromide declaring that "wisdom is like marinade."

Hollywood spiritual favorite Marianne Williamson (an Oprah pet) wants
readers of her contribution to O to add "a cup of courage" to the marinade
(for strawberries? I really couldn't tell) along with a "pinch of personal
humiliation and a teaspoon of deep regrets." I tried to do this, but found
I had only half a cup of courage, so had to borrow some from my neighbor.
She was out, so we cut my regrets with lemon juice and served the marinade
as a salad dressing.

Then there is the page of Sunday activities that features a call to prayer
alongside a suggestion to get a free cosmetics makeover (Page 256). The only
thing missing is a time-management strategy for doing both at the same time.
If enough of Oprah's followers stampede the Clinique counter to meditate, it
could spawn a whole new profession of aesthetician-priestesses who admonish
client-supplicants to "turn your face to God ... so I can get your eyeliner
straight."

Not everything in the magazine rang hollow. I wrote a check to charity and
gave away some nice warm wool blankets. I even prayed. It felt great, like
the minivacation those ridiculous spa articles promise but their treatments
never deliver -- though canceling my pedicure appointment was probably not
the epiphany O's editors had in mind. After all, these are the same editors
who lavished us with a predictable seven-page color spread on spa
treatments.

The fashion in O is presented with the same breezy prose that other women's
magazines use, which is to say it flogs couture as a pick-me-up, a
prescription against depression. Like O's decorating hint, "Open Up Your
Home With Warm and Bright Shades of White," the clothes try to fashion a
bright outlook via sunny appearances.

That should be a good thing, but the difficulty is that these particular
items don't elevate their wearers via elegance or distinction. Instead they
take the form of one of the most aggressively Midwestern, middle-class,
conformist -- not to mention marginalizing -- costumes the postwar era has
yet to see. Which is OK, I suppose. Except you can't wear capri pants and
thongs to a hearing or to give a lecture -- never a problem for Harper's
Bazaar editors, but the voice pitching the backlash garb this time isn't
supposed to be one of the patriarchy's usual dupes. Or is she?

In Oprah's "Let's Talk" column, she writes that she wants her magazine to
help you "become more of who you are." Not exactly an easy goal to evaluate.
It is worth pointing out, however, that while the benefits of this magazine
to Oprah's readers may be hard to pin down, it is obvious that it helps
Oprah become more of what she is: a media mogul.

There are times when the gulf between O and its readers is unintentionally
funny. While the financial advice column lists suggestions for saving $1,000
in just one year, "What to Wear With Jeans" suggests sprucing up your old
Levi's with a long-sleeved T-shirt in lime green that costs a mere $795. Hey
O, I've got an idea -- skip the T-shirt and you'll have an $800 start on the
nest egg.

Not that Oprah's magazine doesn't have its merits. It should be a big hit,
for some of the same reasons that "Who Wants
to Be a Millionaire" is the highest-rated show on television. It
underestimates us and at the same time enriches the already wealthy. Oprah's
origins as a poor black girl from Mississippi temporarily let the reader
forget that no one, and especially not Oprah, has yet lost money
underestimating the American public. But this time, the underestimation
feels personal; O is supposed to know better.

Maybe I ought to feel grateful to O for reminding me of the joy of prayer,
charity and service to my fellow human beings -- but the truth is, a week
after consuming the magazine, the only O article that genuinely changed me
was an excerpt from a forthcoming autobiography by Elizabeth Kim.
Appropriately located in the "Phenomenal Woman" column of the magazine, the
story of Kim witnessing her mother's murder for bearing a mixed-race child
(Kim herself -- the product of an illicit liaison with an American soldier)
is amazingly good.

Surely this chilling book excerpt represents the best of what inspires
Oprah, her television show and her book club -- and erases all their
excesses. Bringing Kim's book into a magazine aimed at dissatisfied women
is probably the best possible way to promote it to the sort of readers who
"need" it most. But at what cost to such readers does Oprah frame
journalistic truth with a $185 Burberry dog leash?

"Phenomenal Woman" or not, because of its form/content conflict, O's most
emblematic page doesn't feature reportage, fashion, advice or even poetry:
It is a Hallmark ad featuring an African-American schoolgirl opening a card
she has found in her book bag -- and it sums up all of O's lofty goals,
craven means and empty promises. The caption reads: "Self-Esteem, 99"."