United Airlines, the world's largest carrier, announced plans to acquire US Airways. If the deal takes off, will competition nose dive? 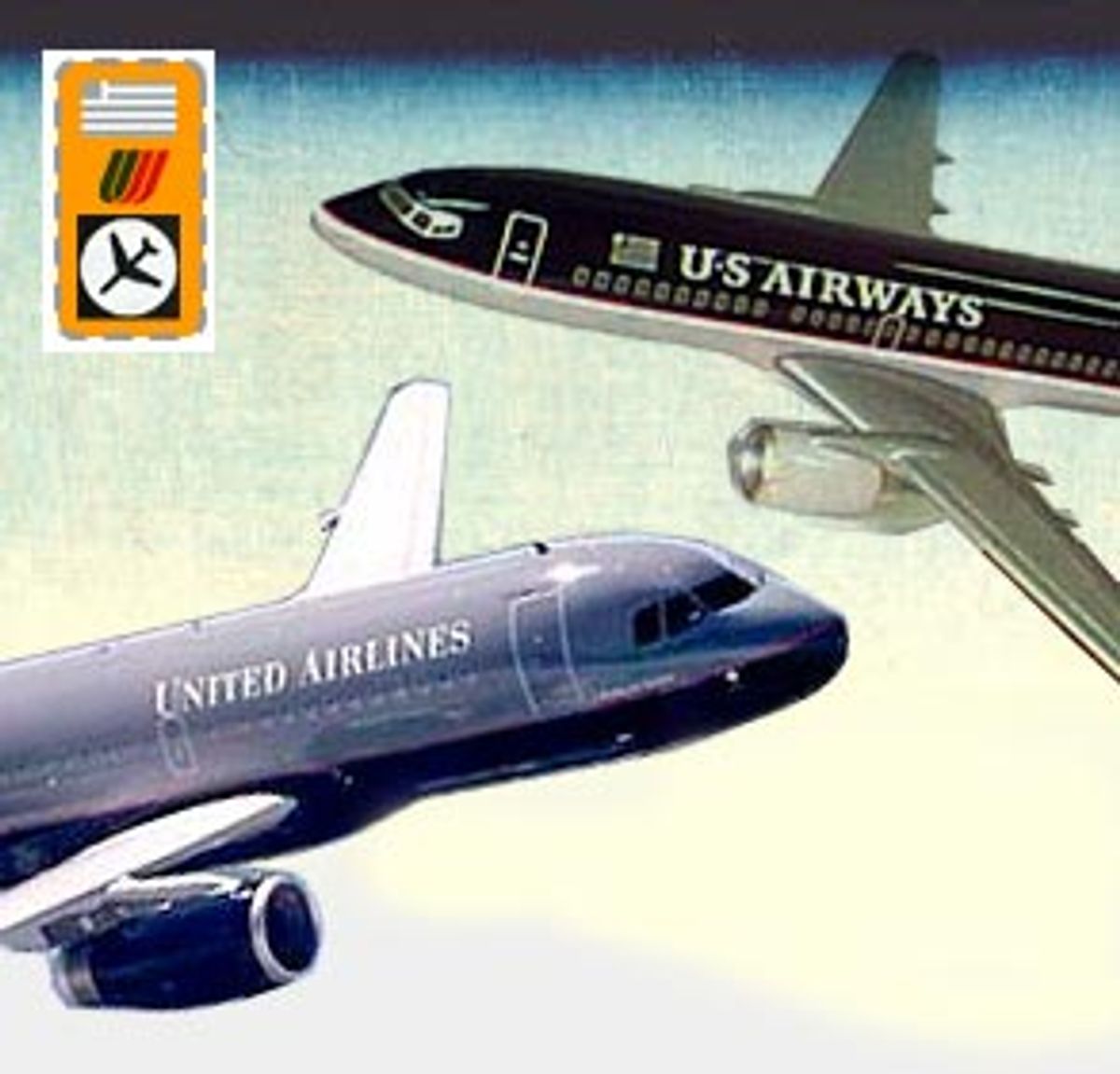 United Airlines announced plans Wednesday morning to buy troubled US Airways for $4.3 billion, a deal that, if approved, would become the largest acquisition in airline history. The resulting company would have over $25 billion in annual revenue, according to 1999 figures, and more than 145,000 employees.

Shareholders and federal regulators must first approve the deal, overcoming hurdles that have shut down similar ventures in the past. And though none has been announced, a higher bid from another airline could still snatch US Airways away from United.

Both companies claim they have a good fit, citing the lack of overlap on the two carriers' routes. United generally offers east-west flights, while US Airways focuses on north-south routes on the East Coast.

Under terms of the deal, United will pay $60 per US Airways share, which closed Tuesday before the announcement at just under $26. UAL Corp., United's parent company, will also assume $7.3 billion in debt and aircraft operating leases as part of the deal.

The great weight of the prospective deal resides in its effects on competition within the industry. If approved, the acquisition will give United an edge of more than $7 billion over American Airlines, its next-largest competitor. Though Stephen Wolf, US Airways chairman, claims the deal is "clean from a Justice [Department] perspective," antitrust analysts, industry experts and travel agents are calling this the beginning of the end.

"We have an industry now where there's already not a lot of competition," said Ed Faberman, executive director of the Air Carriers Association, which represents new entrants in the airline industry. "[The proposed deal] may be slamming the door on new entrants."

"The market is already concentrated, and rife with competitive problems," said Albert Foer, president of the American Antitrust Institute.

Following deregulation of the airline industry in 1978, the number of major carriers shrunk considerably. In turn, the market share held by each company exploded. Where large hubs -- Atlanta, Philadelphia and Dallas, for instance -- were once divided into two or three chunks, they're now often dominated by a single airline.

"Many of the problems we've seen in the last year, from service to [ticket] pricing, have resulted from the disappearance of competition," Faberman said. "These companies so dominate the market, they don't seem to care."

It's still too soon to say what practical differences consumers will notice. As Dexter Koehl, vice president of public affairs for the Travel Industry Association, said, the deal "brings more resources to bear for the airline." Mergers in the past, he added, have resulted in an abundance of flights, and presumably an abundance of choices for the average flyer.

But will United's increased resources make their way to the customer? Faberton takes issue with Koehl's evaluation. "It is terribly misleading to suggest that everything is cool because we have more flights. [There may be] more options, more ways to get to L.A., but there's no fare competition."

Faberton adds that the lack of competition allows airlines to reduce service in smaller markets. "Call Sen. [Byron] Dorgan from North Dakota, call Sen. [Olympia] Snowe from Maine, and ask them if they have more choices than they did years ago."

From the ticket-buying perspective, the deal's consequences are clear to some. "It simply means less competition, which means higher prices," said Russell Daily, manager of Deeds & Daily World Travel Services in San Francisco. Daily, a travel agent for 30 years, likens the effects to those of deregulation: consolidation and fewer choices. As for United's concurrently announced promise to freeze "some" domestic fares, Daily wonders why the company won't specify which will be frozen. "I don't have a lot of confidence in them."

"This is not good for the general public," said Bill Beck, co-owner of Airlines Online & Travel Services Network in Anchorage -- a city that has seen carriers all but flee for more market-rich hubs.

The pending deal places concerned consumers in something of an unlikely alliance with United pilots, whose union has done all but oppose the acquisition. The integration of personnel presents a particularly difficult problem in airline mergers, given the complicated task of sorting out seniority among pilots. Jim Higgins, an analyst with Donaldson Lufkin and Jenrette, said many United pilots would be bumped back if the merger goes through, making union approval of the deal unlikely.

"A lot of United captains won't be captains the day after this merger," he said.

It was the powerful pilots union that prevented a similar merger in 1995. United is 55 percent employee-owned, making their consent essential to the merger. Spokespeople for both airlines made assurances that the pilots would be treated fairly.

The language of the deal also stresses benefits to consumers -- the merger will "stimulate commerce, jobs and economic development across the United States," United chairman James Goodwin said.

Foer points out that, historically, mergers lead to no such developments. "Typically a merger results in fewer jobs because you cut out a level, even if only the upper management level."

Throughout the official rhetoric, United refers also to the increased services it will be able to offer travelers, including the addition of 64 new daily nonstop domestic flights. "The addition of US Airways will greatly improve United's ability to serve customers in the East," Goodwin said.

Goodwin doesn't explain, however, why a customer might care: The gross number of travel options at one's fingertips presumably won't increase; only the name on the plane will change.

If the potential anti-competitive consequences of the deal appear so obvious -- even if the United deal doesn't undo the market, strategic reaction from other airlines will likely include similar acquisitions -- why would the Justice Department even consider allowing it to happen?

"Nobody thought Exxon-Mobil would go through," Foer pointed out, referring to the recent oil merger.

Faberman suggested that federal regulators suffer a kind of resignation. "They look at these [mergers] and say, 'This isn't that much worse than the last one.'"

And United has thrown a bone to the antitrust camp, announcing plans to sell off operations at the congested Reagan National Airport in Washington, to a start-up carrier, DC Air. US Airways board member Robert Johnson would run the new airline, making it the nation's first black-owned carrier. Johnson is chairman and chief executive of privately held BET Holdings, a cable television company that owns Black Entertainment Television and other programming.

Some doubt this move will appease regulators. "It's no real competition [to the United-US Airways company]," Foer said. "It's a small start-up run by a busy entertainment executive."