Lie of the Week 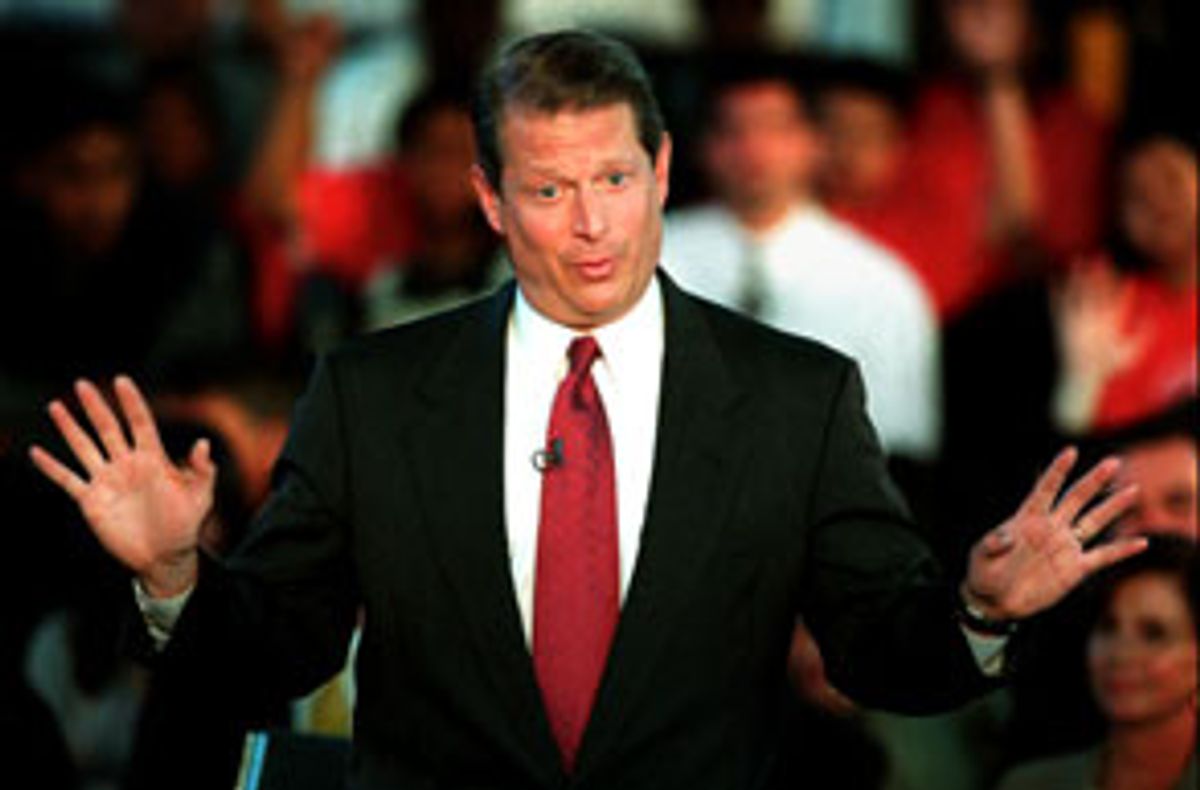 "I challenge you to accept my proposal that we both reject the use of soft money to run issue ads. I will take the first step by requesting the Democratic National Committee not to run any issue ads paid for by soft money unless and until the Republican Party uses money for advertising."

The chairman of the Republican National Committee, Jim Nicholson, Thursday issued a harshly worded press release criticizing Al Gore for reneging on a promise not to run "soft money" issue ads "unless and until" George W. Bush did the same. Bush hasn't run any, but the Gore campaign reportedly was about to start.

Team Gore spin: Gore put a deal on the table and George W. passed, so they are perfectly able to use soft money ads if they want to, without reneging on anything.

The big picture here is rather clear. Coming off a solid victory over Bill Bradley in the Democratic primary and drawing even with George Bush in the polls, Gore challenged Bush to be the first presidential candidate to run soft money ads. The Gore camp's thinking went like this: Bush had just come out of the primaries badly bruised by his fight with John McCain. He was the one who needed the soft money ads to repair his image, not Gore. Plus, the Republicans have a lot more access to soft money than the Democrats do.

Gore's folks clearly figured this was a challenge they could easily afford to make. They didn't figure Bush would spend the next eight weeks making up a good bit of the ground he'd lost to Gore, and that Gore would be the one who would really need to start running those spots.

So, for our purposes, the question is: How much wiggle room did the Gore folks leave themselves if things went south?

The answer? Not much.

The Gore camp has floated several possible explanations for why Gore hasn't actually gone back on his promise. "There was an offer," Gore's ad man Bill Knapp recently told the Wall Street Journal. "They rejected it. There's not an agreement." The Gore people also say that part of the vice president's offer included his challenge "to forgo all campaign advertising and instead agree to a series of debates."

At first blush this sounds pretty good. If Bush didn't agree to the bargain, why should Gore be bound to it? Well, because he said he would be. This isn't the first time Gore has tried this. He tried something similar with Bradley last fall, challenging the former New Jersey senator to pull all 30-second ads in exchange for a series of debates on the issues. Gore's problem is that this time he didn't couple the two offers. There's no way in the world Bush could have agreed to regular debates. But Gore's e-mail said: "I also challenge you to a further step. Let's agree to forgo all campaign advertising and instead agree to a regular series of debates," i.e. a separate agreement.

So I decided to talk to Gore campaign spokesman Doug Hattaway. He claimed Gore was off the hook because the RNC had spent money on ads it ran aimed at Latino voters in California.

Bush, he continued, also didn't agree to be bound by the deal. So, as Knapp argued, no deal. But, I pointed out, Gore's proposal specifically said that he would refrain from soft-money advertising "unless and until" Bush did so. "OK, fair enough," said Hattaway -- with a refreshing willingness to drop a bogus argument.

But still we have the lingering question of the RNC money spent on those ads aimed at Latino voters in California.

So I asked Mark Pfeifle at the RNC: How about it? Pfeifle said those ads weren't paid for by soft money but rather "100 percent non-federal hard money." [Note: Pfeifle contacted Salon after this story was published, saying he had meant "federal hard money."] Did the RNC spend any soft money on ads since Gore made his challenge. No, he said, "not one thin dime."

So is Gore caught in a lie, caught breaking a promise? Well, the Gore people have one technicality that seems to hold up. In his original proposal Gore said the deal "would also cover loopholes which other organizations and individuals, like the Republican Leadership Council and the Wyly brothers, have used to raise and spend unlimited soft money to run issue ads without any disclosure of donors." A number of Bush-allied organizations, most notably Shape the Debate run by former California Gov. Pete Wilson have done just that. "That doesn't even pass the laugh test," responds Pfeifle.

So what's the verdict? A lie? When you closely parse the e-mail Gore sent to Bush, it actually includes a fair amount of wiggle room. Gore slips by on the most technical of technicalities.

But between you and me, Gore broke his promise.

E-mail your suggestions for Lie of the Week lieoftheweek@hotmail.com.