Can you spell failure?

The Scripps Howard National Spelling Bee seen on ESPN offers its vast audience exactly what it's hungry for: Loser TV. 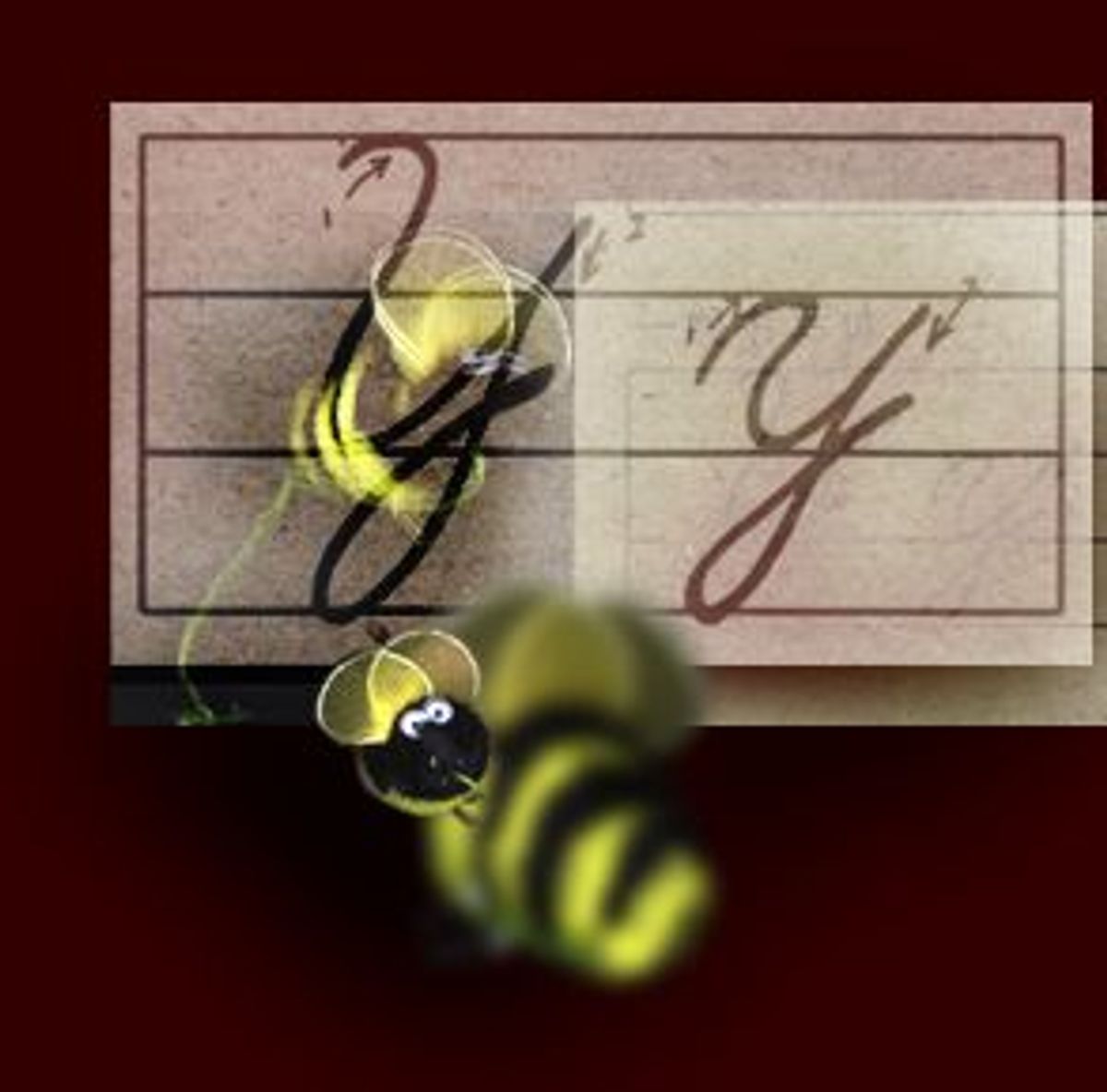 This year, on the last day of May and the first day of June, approximately 250 of the nation's most word-conscious 11- to 14-year-olds are pitted against each other to determine who among them is the best speller. These children sport large numbered placards and matching spelling bee polo shirts. They're arrayed on a stage in a hotel ballroom in rows of chairs reminiscent of a graduation ceremony or a cakewalk. Until their time at the microphone arrives, each will remain seated, manifesting signs of boredom or acute stress. There will be no costume changes, musical guests or celebrity emcees. Laugh tracks, sex and violence will be similarly absent.

Despite these seemingly fatal flaws, this is no network nightmare. It is, in fact, a programmer's dream. The stage, the spelling words, the kids with their numbered placards and nervous tics -- all these humble elements combine to produce great television.

ESPN knows this. For the past six years, it has been providing live coverage of the Scripps Howard National Spelling Bee's final rounds, which translates into two and a half hours of children asking, "Can I have the word used in a sentence?" with varying degrees of hopefulness or desperation.

Over the course of the year, this coverage will be reaired from six to eight times. And finally the mystery will be gone. The country will know the winning word, the winning speller. And yet, we will still tune in, often in numbers exceeding those for the original airing. The reason for this is simple, and that reason is failure.

Failure, strangely, is not a recurrent TV guest. Entertainment generally means watching someone overcome adversity, whether large or small: George correctly identifies the phrase "Tea for two" and wins $5,000 and a refrigerator-freezer. Janice takes her dog to the vet and learns the true meaning of friendship. The capsule summaries of TV Guide tend not to include morsels such as, "After spending three months attempting to memorize the dictionary, Mary misspells lassitude and is sent back to Kansas with only a commemorative watch." But perhaps they should. As the ESPN ratings attest, that is apparently what we want to see.

Because while the official purpose of the bee may be to determine the nation's absolute best prepubescent speller, that winning moment only comprises 15 seconds of actual TV viewing. If ESPN wanted to, it could air the last half-hour of the bee and still provide a suspenseful buildup to the winning word, the resulting tears of happiness and the presentation of the engraved loving cup. But instead, that final 15 seconds is preceded by two hours, 29 minutes and 45 seconds of watching kids fail.

These kids are leaving the extra "s" out of ossificatory or the first "c" out of Rorschach. They're substituting "t" for "d" in vidimus. By the time ESPN takes the bee live (Thursday from 1 to 3:30 p.m. EDT), the original 250 contestants have already been winnowed to about 40, but that still provides a higher failure rate than just about any other televised event. It beats "Jeopardy" (two losers per 30 minutes), ice hockey (six losers per 90 minutes) and even the Indianapolis 500 (32 losers per 180 minutes). If ESPN were really clever, it would precede the live airing of the bee's final hours with a taped airing of the bee's action-packed first round, which boasts a practically untouchable 21 losers per half-hour.

The great thing about all this failure is that it is occurring on a human scale. These kids aren't screwing up at something spectacular, something we could never even hope to bungle, like scoring the Stanley Cup's decisive goal or outmotoring Mario Andretti. They're failing at something most of us botch regularly. When we watch Duane Karcher from Saginaw, Mich., flub the "o" in pergelisol and pinch his features into the facial equivalent of a fist, we are united with Duane and every adult and child watching with us who had no chance of getting it right, either. And, like Duane, we probably don't know what the word means.

We belong to the land of the movie star, the overnight sensation and the self-made millionaire, yet the odds against actually achieving such unqualified success are staggering. Most of us have tempered our individual American dreams accordingly. As a result, television's endless parade of winners can get, well, a little boring.

Perhaps the growing viewership of the bee will inaugurate a new era in television, or at least a new cable station. Loser TV could feature game shows like "What's Your Mother's Birth Date?" and "Did That Check Bounce?" Feature programming would include "Almost" and "Maybe Next Time," starring characters who, despite their best efforts, never quite get what they want.

Perhaps, as entertainment increasingly favors viriti over fantasy, it won't be long until failure hits prime time. Until it does, at least we've got the national bee. Logorrhea never sounded so good.

Myla Goldberg is the author of the recently released novel, "Bee Season."