A history of the club where Jack and Jackie and Joltin' Joe and Marilyn and Grace and Rainier and J. Edgar all rubbed shoulders. 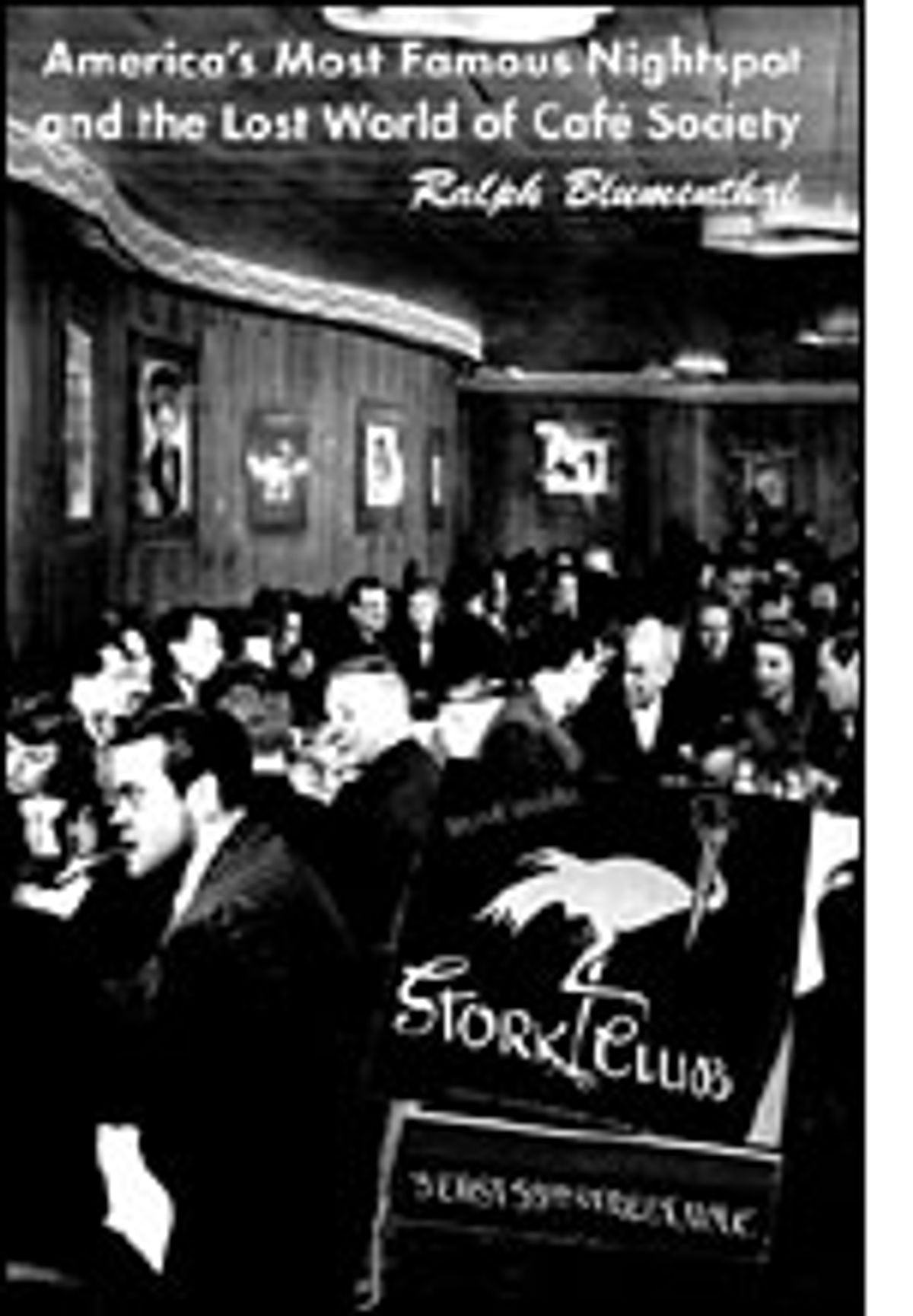 One of the best, if most obscure, lines in the movie classic "All About Eve" gets spoken when fading diva Margo Channing settles into a booth at a posh Gotham nightclub and remarks, "Isn't this a lovely room? What a clever name. Where the elite meet." Everyone in 1950 caught the allusion to the Stork Club, but delivered from the tart lips of Bette Davis, aping the mannerisms of real-life fading diva (and Stork regular) Tallulah Bankhead, the words take on a slyly malicious meaning. The room really isn't lovely. The name -- please. And while the elite may meet there, any serious business they conduct they conduct elsewhere. She might as well have said, "What a dump."

But in the year that "Eve" won every Oscar in the land, the Stork was soaring. It was "New York's New Yorkiest place," according to Walter Winchell, the powerful gossip columnist, who practically lived there. Ralph Blumenthal, a New York Times reporter who covered the club's demise in 1965 and then, not surprisingly, forgot about it, has produced a sprightly account of its storied past: the Runyonesque guys and dolls, the preppy "jelly beans," the forgotten debs and dowagers, the gobsmacked tourists from Peoria, the stolen ashtrays and the pinched coat-check girls.

The temptation with powder-puff subjects is to read too much into them; Blumenthal has avoided that mistake. The Stork was the perfect place to take a prom date or a hot date, but it wasn't a microcosm of anything. Nor was it a cultural hothouse like Cafi Voltaire or Deux Magots. That events from the Great Depression to the Great Society infringed upon it is to be expected, but Blumenthal's sense of proportion is compact -- lipstick compact.

Like the other classy gin joints -- 21, El Morocco, Toots Shor, the Flamingo -- the Stork started as a speakeasy. Sherman Billingsley, an Okie bootlegger who was the Stork rube body and soul, blew into town just as the "noble experiment," Prohibition, was laying the nation's bottles to rest; he sized up the situation and opened the first of his many "pharmacies." With repeal, he jettisoned his empire but kept the crown jewel, the Stork. The diff? The Stork was snooty.

The Second World War saw the club flourish as an R&R mecca for our boys in uniform. Later on, though, the Stork's fortunes took a plunge. Mr. B., as Billingsley was known, was by nature a gambler, winning big but also losing big. He overplayed his hand with an unsuccessful TV show, with Stork Club emporiums, with free perfume for the ladies, free silk ties for the gents, free champagne for the famous faces and numerous acts of personal generosity (which compensated for his numerous acts of personal viciousness).

Labor racketeers also had it in for him, never leaving him alone, not even on the Stork's last day of business -- dispatching a lone picketer to harangue a ghostly clientele. The New York Post, viewed by many at the time as a pinko (!) rag, made a stink about the bugs inside the club, and I'm not talking cockroaches. (Although Richard Nixon never frequented the Stork, Joe McCarthy and Roy Cohn did.) The lowest point was Josephine Baker's racial discrimination charge against Billingsley, an ugly spat that tarnished the reputations of all involved, including Baker, who may have provoked the incident that led to the charge. (The Stork was hardly colorblind, however.)

Time marches on, only Mr. B. didn't know it. The country slicker who managed to stay a step ahead of legendary tough guys such as Owney Madden, Legs Diamond and Dutch Schultz lost his way and lost his touch. It was all over the day a notice for a $1.55 hamburger-and-Coke deal appeared in the papers -- the Stork had never stooped to advertising.