This summer thousands of med school graduates will be unleashed on unsuspecting patients, and I know why the public should be scared. 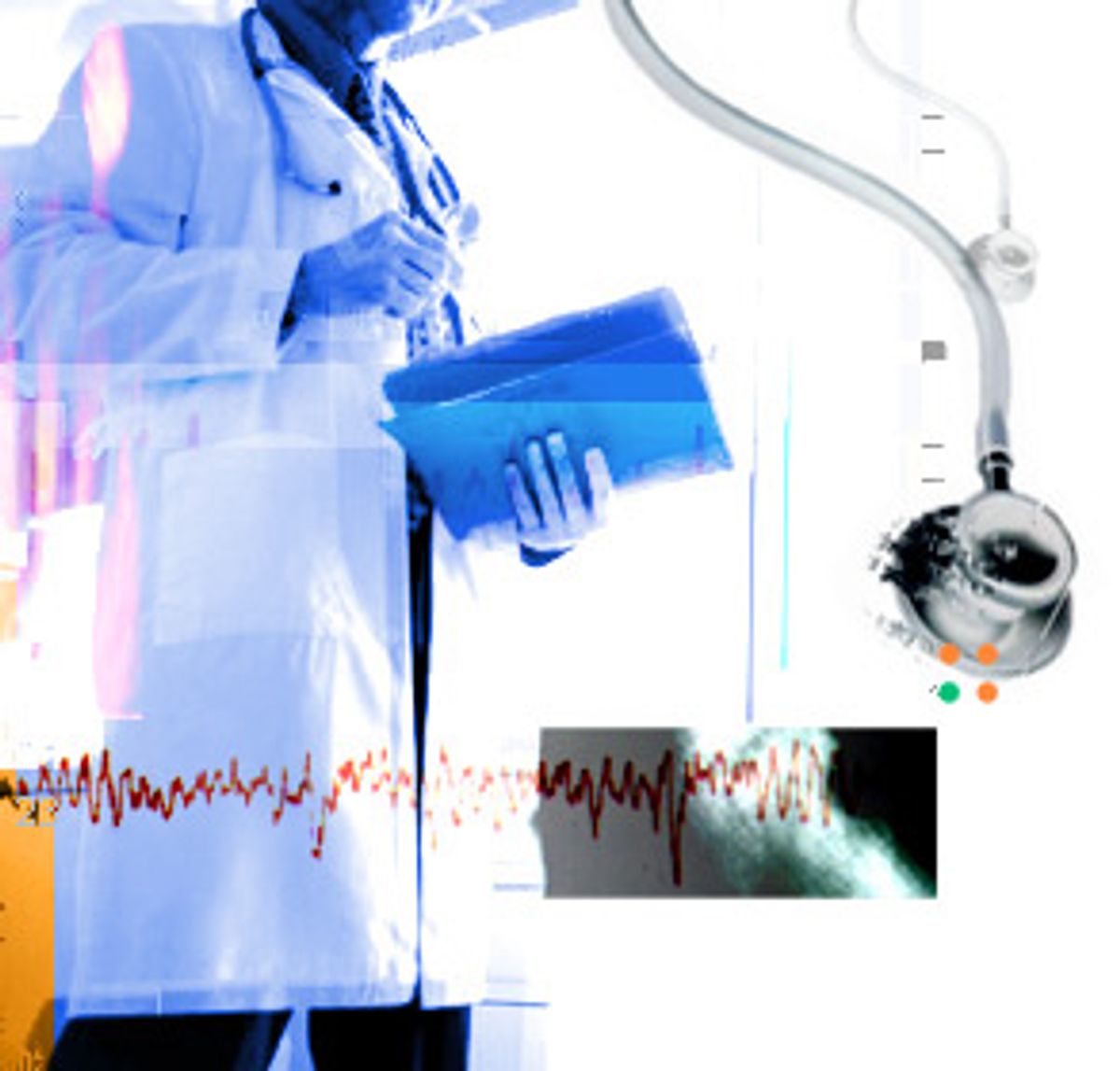 I tore down the last flight of stairs and burst into the hallway. A crowd of people turned as I rushed, white coat flapping behind me like a superhero's cape, into their midst. They parted readily, forming a narrow trail for me to pass into the room, wherein raged a small tornado of activity. At the eye lay an enormous, pale, heaving man.

"He's in V-tach, Doctor," a nearby nurse informed me breathlessly. "Oxygen sats down in the 80s." From nowhere an EKG appeared in my hand. I held it up and frowned thoughtfully. And as I stared at the series of lines and curves that held volumes of critical information about this dying man's cardiac function, one throbbing thought pulsed its way to the very front of my brain: I have no idea what the hell I'm doing.

Only 10 minutes before I had been sound asleep, dreaming that dream in which I live in a far-off land where people can have all the bowel movements they want and I don't have to report them to my resident. Suddenly, there was this terrible, insane beeping, the kind that didn't stop no matter how many times I hit my alarm clock or tried to check my laundry.

It had been my beeper, of course. And when I groggily answered it, only to get some woman asking for the intern on call, I became irate. After all, didn't she know I was just a med student?

But then, as I looked around at the sterile beige call room and the hard plastic hospital bed beneath me, I came to a realization. That graduation ceremony a month before. That Oath. Maybe I was the intern on call. Shit.

The Association of American Medical Colleges estimates that 18,391 people like me -- fresh from medical school -- will be unleashed on the patients of this country on July 1. We will infiltrate local hospitals, clinics and medical centers near you. Despite the four years we spent memorizing textbooks and not sleeping, many will feel, like I did on that day, completely ill-prepared to be a doctor.

Contrary to popular belief, there are no actual classes in med school on how to perform medical interventions. Sure, we sat for hours on end learning all the atoms in the pyridine ring and their fascinating relation to the pentose shunt. But spinal taps, Pap smears, staunching the uncontrollable bleeding caused by a zealous nurse-practitioner -- these we simply had to pick up along the way. And if, through bad luck, poor timing or sheer lack of interest, we did not witness a particular procedure, such as draining an abscess, well, there was nothing you could do.

So there I stood, with 300 pounds of cirrhotic liver slowly degenerating from decades of alcohol abuse and emphysematous lungs worn down by thousands of packs of cigarettes, quivering violently next to me. I closed my eyes and tried to remember that graph from physiology class four years before, the one about cardiac output or something. It felt so nice to have my eyes closed.

"You want a liter of fluids?" a tall nurse asked, the way my mom used to "ask" me if I wanted some broccoli as she heaped it onto my plate. Startled, I nodded mutely, and turned to see a blond nurse hauling in paddles, glass vials and other vaguely familiar things.

"Should I put some gel on his chest?" she asked. It didn't sound like it could hurt and she seemed so excited about it, so I nodded again. A large nurse began to draw some blood, and after several moments asked if I'd like her to draw some blood. I nodded once more.

Suddenly, two paddles appeared in my hand, just as I'd seen so many times on television, and once in that class we had to take a few weeks before. Did I want to put them on the patient's chest, the blond nurse asked, in order to assess his cardiac rhythm? Another nod as the cold steel contacted the cooling flesh.

"Still V-tach," someone announced. I squinted at the monitor and tried to remember whether ventricular tachycardia was a squiggly pattern or a sawtooth pattern.

"Everyone stand back and let the doctor shock him!" the tall nurse yelled. I looked around -- it was just me and the patient, alone in the middle of a circle of people, like the losers in some children's game. The tall nurse looked me in the eye: "You're all clear."

I sure didn't feel all clear, though. In fact, I felt pretty confused. After all, there I was, the lone M.D. responsible for this patient's deteriorating medical condition. True, there were two residents elsewhere in the hospital with a year or two more experience than I, but their job was simply to answer any questions I had, and I didn't particularly think that a 10-minute telephone conversation was in order at the moment.

Besides, I had enough knowledge floating around in the part of my head that used to contain baseball statistics to pass the national boards. I should be able to handle this, shouldn't I?

People have always told me that there was more to medicine than just pure knowledge, but I had never believed them, until this very minute. They had said that the difference between being a medical student and an intern was the ability to take what little knowledge you had gained and put it all together. Was this true? Closing my eyes, I took a deep breath.

I opened them again to see the paddles still clutched in my hands. Put it all together, I thought. Ventricular tachycardia -- the part of the heart that pumped the blood to the rest of the body was spasming uncontrollably, such that very little blood got pushed anywhere. How do you stop that? I could not remember.

"Doctor? You're clear." Clear? Clear. I looked down at the paddles -- there was only one button on each. With nothing else to do, I pushed, unleashing a terrible "ker-CHUNK!" I looked back at the monitor, as the sawteeth gave way to a spiky pattern. Spiky, I knew, was good.

"Pressure's back to 100 over 60," someone announced, dialing a phone. "You want me to call intensive care?" I nodded, happy to know that this patient would soon be in a place where he wasn't my responsibility and could have all the arrhythmias he wanted. A smiling nurse handed me the chart and suggested I sign the orders. "Great work, doctor," she said, her eyes like saucers. I hadn't done a single thing, or even said a word. I nodded one last time.

Throughout medical school, there are two rules that are constantly being pounded into each student's moist, softened brain. The first is that it's OK to admit that you don't know something. This is based on the idea that nobody knows everything, and if you don't know the answer, it's much better to admit to it rather than go off half-cocked and possibly screw something up like an idiot.

The second rule is that no matter what, under no circumstances should you ever ever admit that you don't know something. The idea behind this is that we're doctors, damn it, and we need to act -- after all this training, we have to know something and it's better to take your best guess and go with it (full-cocked) instead of just standing around doing nothing like an idiot.

It was the first rule that found a special place in my heart; in fact, I perfected it. Because if you don't know something as a student, you have a built-in excuse: You're still learning. But somehow, there's this idea that once you make the jump to doctor, you have all the answers. Heck, that had always been my impression, based mostly on the events portrayed on "St. Elsewhere." I just figured all this knowledge and the ability to use it would occur magically with no explanation, much in the way the liver, I'm told, controls how well your blood clots.

But as it turned out, I was no different the day after graduation than I was the day before. It's true, I had a brand new diploma, and could legally be sued for a whole new set of reasons. But when I found myself leafing through my textbook of internal medicine, I realized that even though I was officially a doctor, I still hadn't heard of half the diseases. My heart then began to race and I broke out in a sweat, which I knew were the symptoms of something, though I couldn't quite put my finger on it. All I knew was that after four years and $142,863, I felt hopelessly, frighteningly unprepared.

After all, medical school had given us what it could, but what it could not teach us was what it's like to have to care for a patient with no backup. It never told us how it feels to be the last line of defense between a dying man and death.

Yet as I stood watching the patient's bed being wheeled toward the intensive care unit, I realized that I had indeed learned something in medical school. And though it didn't seem like much at the time, it was, perhaps, the most valuable lesson I would ever get. Until you know everything there is to know, it's OK to listen to others who are more experienced, and learn from them. Maybe some doctors would pretend to know it all, but I could keep the humility of the med student alive.

Jeff Drayer is the author of "The Cost-Effective Use of Leeches and Other Musings of a Medical School Survivor." He lives in Boston, where he is doing a dermatology residency.