A hitchhiker in the new economy

At h2g2.com, Douglas Adams is trying to make his guide to the galaxy come to life. 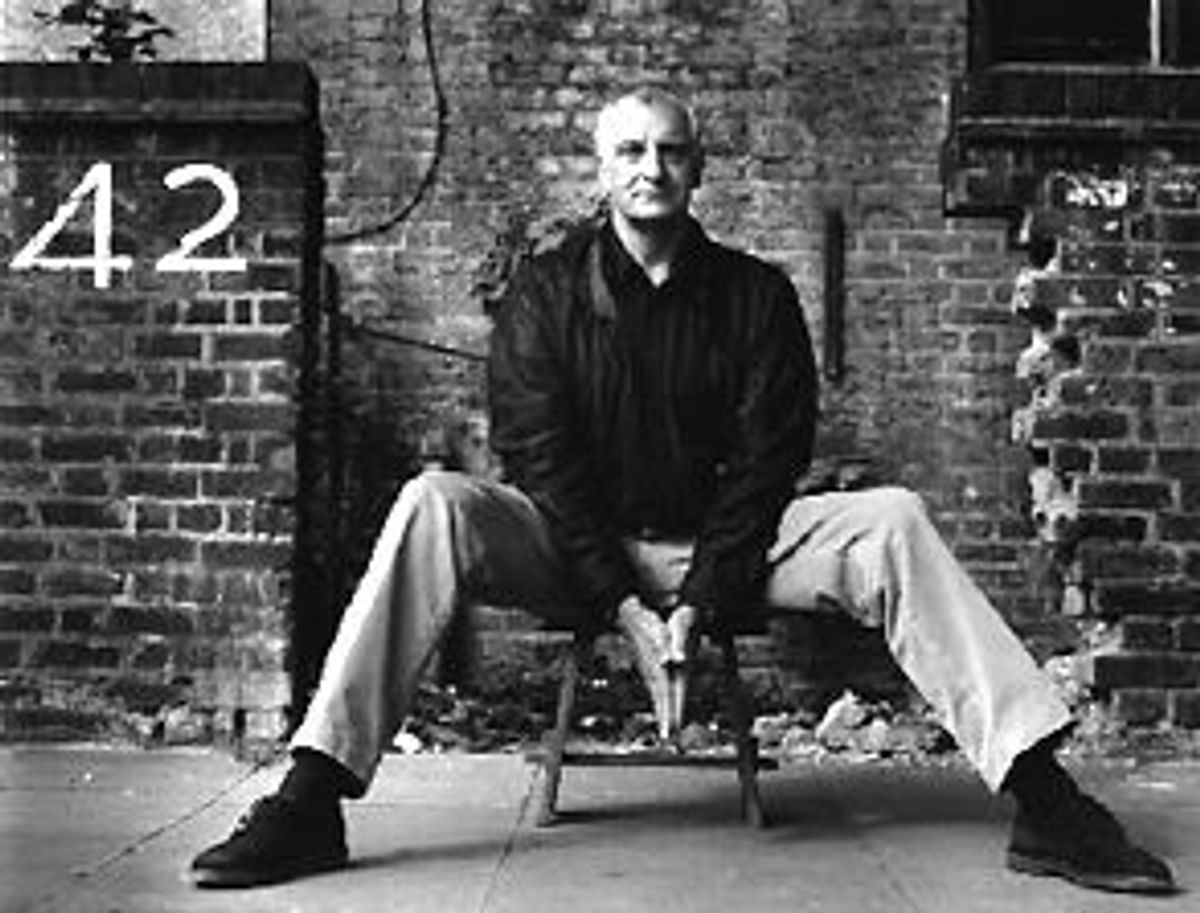 Twenty years ago, science fiction author Douglas Adams envisioned a plastic device "rather like a largish electronic calculator" with the words "DON'T PANIC" printed on it in large, friendly letters. This device was called the Hitchhiker's Guide to the Galaxy -- a kind of proto-electronic encyclopedia that contained useful information about "life, the universe, and everything" written by the galactic hitchhikers themselves. The Hitchhiker's Guide to the Galaxy, (which, of course, was the name of Adams' bestselling book about the adventures of the space travelers), would tell you exactly why you should avoid the gaze of the Ravenous Bugblatter Beast of Traal, shun the poetry of the violent Vogons and always travel with a spare towel.

Fast forward to 2000. These days, Adams is not just a sci-fi fantasist, but a new-economy entrepreneur and the creative mind behind the British company h2g2 Ltd.

h2g2.com (the name is a dot-com abbreviation of the title of Adam's bestseller) was launched in 1999 as the real-world iteration of the guide -- a quirky online community where users could read up on everything from how to conceal love bites to the life-like qualities of lampposts to why men should wear pajamas.

But the Web is a limiting medium if you're trying to be a portable guide to "everything." So last month, in a case of life imitating art, Adams and his compatriots launched a wireless version of the guide in conjunction with Phone.com. If you're using a WAP-enabled cellphone, you can now browse an abbreviated version of h2g2, getting this kind of marginally useful information on the go.

The wireless version of h2g2 has a long way to go before it becomes a truly comprehensive guide to "life, the universe, and everything." Adams is trying to woo users to fill in the gaps in his guide, but still the cellphones available are a far cry from his vision of an electronic calculator with hundreds of buttons and a limitless database.

How, exactly, did the real h2g2 come about?

When I invented the Hitchhiker's Guide to the Galaxy, some 20-odd years ago now, I didn't think of myself as being in the line of being a predictive science fiction writer. But I kept returning to the guide as a good idea -- something that, instead of being compiled by an editor, [everyone] could work on together.

But there were two things that needed to be in place. One has been with us for a few years now, and the other is just starting to arrive. One is the Web, which lets people share everything. But there's a limitation on the Web in terms of creating a real-time, on-the-fly collaborative guide -- people log in at their desks.

The real change takes place when the second shoe falls, which is mobile computing, and that is beginning to arrive now. We're beginning to get Internet access on mobile phones and things like personal digital assistants. That creates a sea change, because suddenly people will be able to get information that is appropriate to where they are and who they are -- standing outside the cinema or a restaurant or waiting for a bus or plane. Or sitting having a cup of coffee at a cafe. At those moments something different happens: You think about something that is very appropriate [to where you are at the time]. With h2g2, you can look up where you are at that moment to see what it says, and if the information you need is not there you add it in yourself. For example, a remark about the coffee you're drinking or a comment that the waiter at the restaurant is very rude.

So you can do this right now on your cellphone that's WAP enabled?

The WAP version is actually up and running already, if you go to WAP.h2g2.com. But to be honest it's more of a demonstration that it works than something of enormous use.

Are wireless devices ready for this kind of a guide?

WAP is the Kitty Hawk of wireless data; the significant thing about it is that it works at all. The interface is barely ready for h2g2, but you've got to go with what you've got. You're not getting it by waiting around for other people to figure it out.

So, is your next move to start manufacturing and marketing bright yellow cellphones with the words "Don't Panic" printed on the back?

It would be a very nice idea to create an actual device that was kind of optimized to h2g2 and we could call it the Hitchhikers Guide to the Galaxy. We do have the rights that we withheld from Disney when we were signing for the movie.

Yes, what about the much-delayed movie about the Hitchhiker's Guide to the Galaxy? It was supposed to be released in the summer of 2000 -- when is it coming out?

It's now looking like it will be released in 2002. I can tell you nothing original or startling or new about this, except that it's Hollywood doing what it does best, which is take one step forward, two steps back. The director is Jay Roach who did "Austin Powers," the producer is Roger Birnbaum who has had his fingers in all kinds of movies [including "Rain Man," "G.I. Jane" and "The Sixth Sense"].

There's a lot of talk about different actors, but nothing I can tell you about yet. It's not being cast quite yet, and it's just being budgeted. So we're basically waiting for the green light, and another draft of the screenplay.

Getting back to h2g2, if WAP isn't what you want it to be, what is your vision for what it should do?

The kind of vision that comes to mind is that people should be able to use this on the move. It's almost as if people were able to walk around in their environment, in their world, and leave virtual Post-It notes. You're standing in a place and you've got some piece of information about that place and that piece of information stays there attached to that point in space. So anyone coming across that space will find that Post-It note floating there.

A few years ago when the Web first emerged people were saying that the great thing about the Web is that it gets rid of geography. But geography is a very important aspect of any piece of information. While on the one hand we've rid ourselves of the need to be restrained by geography, we're nevertheless putting geography back into the mix.

So you think that the missing element in portable devices is some kind of global positioning system?

GPS -- or anything else that gives you location information, is a very important part of it.

What would the perfect portable device itself actually look like?

An ideal device would be mostly screen, since you've got two competing requirements -- the device needs to be as small as possible but the screen has to be as big as possible. Maybe a screen you can fold up like a handkerchief will one day be real. Most of the features will be soft[ware] and it will have to be capable of all kinds of input -- voice, writing, soft buttons. It's got to be your phone, your PDA, access to all your work. And it's got to be capable of knowing where it is in space, with GPS of some sort. It'll probably be a video phone as well. All these things exist, but we haven't figured out a way of packing it all into one device yet.

And when do you hope to see this device?

We'll start seeing clunky versions in the next 12 to 18 months. But something that's smooth? Five years.

So far, it seems that h2g2.com is primarily popular with young male sci-fi fans. Who do you think will be using Hitchhikers Guide to the Galaxy once it really is optimized for cellphones?

Everyone. The whole point is that we are not creating it, we are merely enabling people to create it themselves. So I hope it will be as universal as it possibly can be. I couldn't give you any gender-based figures, but certainly culturally we have researchers from 85 countries.

The great thing about the Web is that is does actually tend to promote the growth of community, and communities within communities, so you can be part of a small community within a larger one. I very much hope h2g2 will foster smaller communities within it. If one of those communities is 15-year-old boys with acne, great, but that's not remotely the only people who will use this.

Isn't it a bit ambitious to think you'll be able to create a guide to life, the universe and everything that is relevant for everyone, everywhere?

What's wrong with being ambitious?

So how do you plan to make money with this?

My role is simply to have the wild ideas; other people get to figure out how to make money with it. It's a complex question for everyone working with the Web. But essentially what we hope to do is become a trusted community whereby people will happily turn to us for access to other services, so that we can mediate or broker other aspects of e-commerce without being the people engaged directly in e-commerce ourselves. We don't aim ever to be directly selling goods or services; the people who intermediate, [who] put people together with goods and services and take some small commissions off it, those people tend to be doing very well.

What's it like seeing some of the ideas that you had 20 years ago come to fruition?

Weird. I didn't see myself as Arthur Clarke -- Clarke, he himself personally invented the communication satellite. And his fiction was almost evangelizing a particular technological vision of the future. I never saw myself doing that. This just isn't what I expected.