The sweat. The music. The boobs. 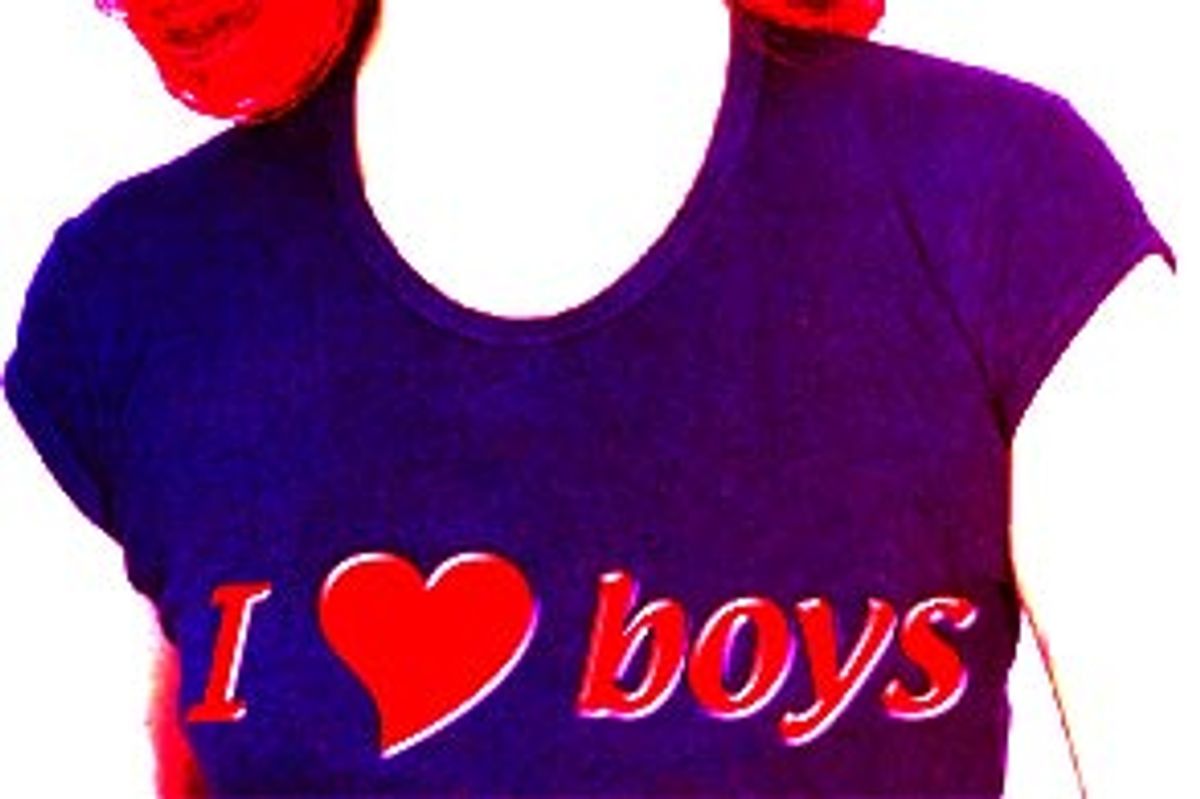 Start with 5,000 bodies. Five thousand steaming bodies. Five thousand steaming, bouncing teenage bodies. Packed into a space where, ordinarily, there would be no more than 3,000. There's an inordinate amount of surging and shoving, but no one minds because we're all so happy to be here -- it's the concert in the time to be 20 and surging and shoving in the pit.

No one ever had fun like this before, and it's not possible that more fun can ever be had again in the future because the music is the coolest ever and the scene is the coolest ever and therefore no place, no time, can exist that is better than right now. The band hasn't taken the stage yet, and beach balls bearing dot-com logos and Nerf Frisbees bounce through the space overhead. Over the speakers come the Violent Femmes: Add it up. A 1980 fossil (20 years old already!), but inside it creates the stirrings of a rhythm. A scrawny boy, spiky blond hair and naked to the waist, all that skin a clean slate still awaiting its first piercing and tattoos, has climbed on top of his friend's shoulders. He is facing a pixieish girl 6 or 7 feet away on her friend's shoulders. He wears a scrappy grin and his hands are held in front of him chest high. Like pinball flippers, his fingers gesture at his nipples, back and forth, back and forth. The girl, clearly the message's intended recipient, blushes and looks over at her girlfriend, also clambering aboard her boyfriend's platform of deltoids.

The scrawny blond guy knows better than to give up. He mouths the words of the Violent Femmes song: "Why can't I get just one fuck! Why can't I get just one ..." and the fingers begin flipping again. The crowd goes at the cheer again -- Show your tits! -- and Chrissie, the leap made, no turning back, ups the top and dazzles the blond kid. A giddy whoop of cheers rises up from the crowd, accompanied by a volley of raised arms. A flash from a disposable camera goes off. The shirt drops and Chrissie hides her face in Jenny's neck for a moment as the two laugh at the crazy stunt.

The Femmes song is abruptly cut off and the DJ, the self-proclaimed afternoon demigod, gives a slackerly introduction to the band -- Staind, Godsmack, Filter, who-the-fuck-ever -- complete with majestically inarticulate pauses and a dropped mike. It's the coolest damn thing, because he's anti-polish and a million years from Casey Kasem or even the MTV veej's and it's broadcast on a screen so big it can probably be seen from Mars. And not a single person cares or is barely listening, not, at least, in the pit, because there's no way to tell what he's saying and all we know is that the group is coming on in two seconds and streams begin to mix the crowd.

One set of streams is exiting before it gets really hairy: skinny, younger guys clearing a path for their skinnier and younger girlfriends, chains of girls with arms locked, guys a-hunting brewski. The incoming stream is bigger, skankier: They want stage. Because the crowd's so locked with bodies, neither stream moves swiftly, but the tug and pull make for some interesting forces. I'm tipping laterally, and so are Jenny and Chrissie, who have made it down from their boyfriends' shoulders and are sticking around for the scene when the music starts. My own mass, all 180 pounds or so, is about to smother what must be a 14-year-old girl in a blue ribbed tank top emblazoned with the legend "I [heart] boys" across her smallish bosom. "Sorry," I half-croak, and lean my shoulders back the way the force is coming from, and while this squeezes Chrissie and Jenny, it does give a couple of other guys just in front and around the chance to counterpush as well, and in a moment we're all upright again and the band is onstage.

The music arrives like a detonating bomb. The opening blast of guitars, bass and drums is a thunderclap of bone-dissolving vibration. It's a song we all know, and 90 percent of the mouths are singing along, a sort of paean to a hopeless future, late girlfriends and grown-ups who can't seem to understand. And in that opening riff, there's room again, at least enough to spread my legs into a stance I can balance on when the tides really start, as they will in a minute.

The space has expanded incrementally thanks to a dozen or so bodies that have gone aloft to surf. From my point 10 yards from the stage, I have to watch for bodies coming in from both front and rear. The pogo-ing crowd is all arms extended; I keep mine halfway up to my shoulders, my head scanning side to side, back to front. The closest airborne bod, 5 yards away, is a not-so-skinny blond girl in a white bikini top and blue shorts, who's being passed stageward, a dozen hands suspending her legs and back, grabbing at her breasts, trying to free them from her bra.

She's protecting them as best she can, a screamy laugh across her face. As I'm wondering if they'll get it off, I'm kicked in the back of my head by a muddy sneaker belonging to an amused, tubby Asian kid who was hoisted up behind me as I watched the blond. In another moment his massive butt is directly in my hands. I am his center of gravity. His direction is mine to choose. I hurl him forward, into a patch of males who don't want to be bothered. He lands feet first and immediately begins trying to climb up again.

I scan again for the blond; she's being tipped to one side by a couple of head-shaved guys, one of whom sports a black tattoo over the ear and across the right temple. They're tipping her so they can get at her boobs better, and when they finally land a feel, she's laughing no less but manages to snake out of their hands. A sudden shift of direction and she's launched away from them. All around her, now at the shoulder-riding level, girls are perched and bouncing to the song. Many are flashing boobs, the crowd no longer individually cheering them on but appreciative nonetheless. The display is, frankly, stunning. Opalescent gems, carved from shimmering droplets of spring water: breasts that calm the savage music. Guys who could be throwing punches and jabs are slack-mouthed at the scenery.

In rhythm now with the tidal surges and flesh sailing overhead, I grab and pass the incoming torsos, keeping my arms ready for any size and weight class. The falls are numerous. I'm close to the stage, where the crush is the tightest, but small gaps of a third to a quarter of a human width are still to be found. An orange-haired girl flips feet over head and is about to splatter, but a chivalrous pair of football-looking types catches her before she can hit. They exchange glances, her eyes indicate she wants back up again and they sweetly comply. No gratuitous manhandling of vulnerable breasts. Up in the air it's a game; down here rules apply. Or maybe it's just the luck of the draw.

I am impressed by the following sociological phenomenon: Guys are allowed to fall while girls are rescued. Civilization is hard to kill, even in the pit. They a woman was gang-raped in front of the stage at Woodstock '99, but that was three days into it. Maybe it takes that kind of time to sever the ties. You just can't get that primitive over the course of a single afternoon. Medieval, yes. Primitive? Nah.

A sudden gust of shoving backward, accompanied by a massive Doc Marten boot planted firmly across my sandaled feet, snaps my attention to another phenomenon immediately ahead. A clearing, an open ring, maybe 7 feet around, has suddenly materialized. Three guys with huge arms, shoulders and beer guts are violently charging and flailing at one another like rams or bulls. As they prepare for or emerge from one of these collisions, they whip around the circumference of the circle, careening off bodies lining the circumference. A bloodied, sandpaper-headed dude, goatlike patch of hair under his chin, has been going at it more viciously than the others, and the wild steam from his eyes suggests he's about to get out-of-control ugly. His arms, a detailed masterwork of thorny branches and snaking vines, pump to an internal beat. As he swings past, a colossally detailed emblem taking up the northern half of his back, black and complex with a central red orb, flexes and pulses as if alive itself.

Oh, shit. His head whinnies and snorts in bursts, hunting for a new partner to charge, and slaps at his chest, menacingly. He repeats this, then, with a quizzical look, stares down at his chiseled pecs. His studded metal collar is missing. He throws his arms up to halt the proceedings, eyes scanning the ground. The other guys get the message and begin pawing the ground, too. It looks like they're searching for a contact, until someone holds the necklace up. Distracted by a new song and a new pair of flashing orbs, they lose interest in body-butting one another and the hole closes.

It's hot, satanically hot, and each body's odor rises up in distinctive wafts. The guys carry a rank, sweat-mixed-with-fart aroma; the girls smell not so bad. At 6-2, I'm considerably advantaged by the occasional breeze that circulates in. A half-foot below me, a purple-haired girl and a green-haired girl make nauseous faces at each other in a wave of warm air, fan at each other, then, as if simultaneously possessed of an unbearably urgent notion, lock faces in an extended, tongue-wrapping kiss. They continue as the first drops of rain drizzle down, then break to catch the raindrops as they bear down bigger and harder.

There was only one way to add another dimension to the revelry, to the animal contact high, and that way was rain. The thousands of bodies already electrically connected to one another at the hip, belly, leg, chi-chi now are slithery and slick, body oils and sunblock, sweat and spunk. Vibrating, blasting guitar chops hack away at any final remnants of intelligent thought, drums pulverize, bass chords grind. Nirvana, bodhisattva. Hello cowgirl in the sand.

A billowy cloud of steam rises off the sea of bodies, and even more suddenly ascend to shoulder-ride, to surf. The blistering aural assault from the stage continues without cease, the visual details blur and shift in the thick fog and in a moment there will be a total disconnect from the mothership. When that happens, all there will be is the music and the crowd, eternal and infinite, and no other reality except the humid, sultry now. Which is the avatar of cool.

What the fuck. A nod of my head to the dudes by my side, signal-response, and I'm up. The rain pounds me from above, hands and heads swipe and push at me from below. I attempt to spread my arms in the sheer joy -- and am bonked hard onto the ground, first a shoulder, then the flat of my back. No worries, I'm headed up again and ready to sail, for real, once again.

But the set ends and with that the moment and people are turning away and heading out. The sudden cessation of concussive noise leaves a migrainous void, pulsing and aching. Each muscle in my body has been pulled and stretched; floral bruises are in bloom. Time for a beer. Definitely. Rage is gonna be on soon and I can't wait to get back.