"Bodies in Motion and at Rest" by Thomas Lynch

The popular literary undertaker takes on some tough life issues: Divorce, abortion and putting a hated cat to sleep. 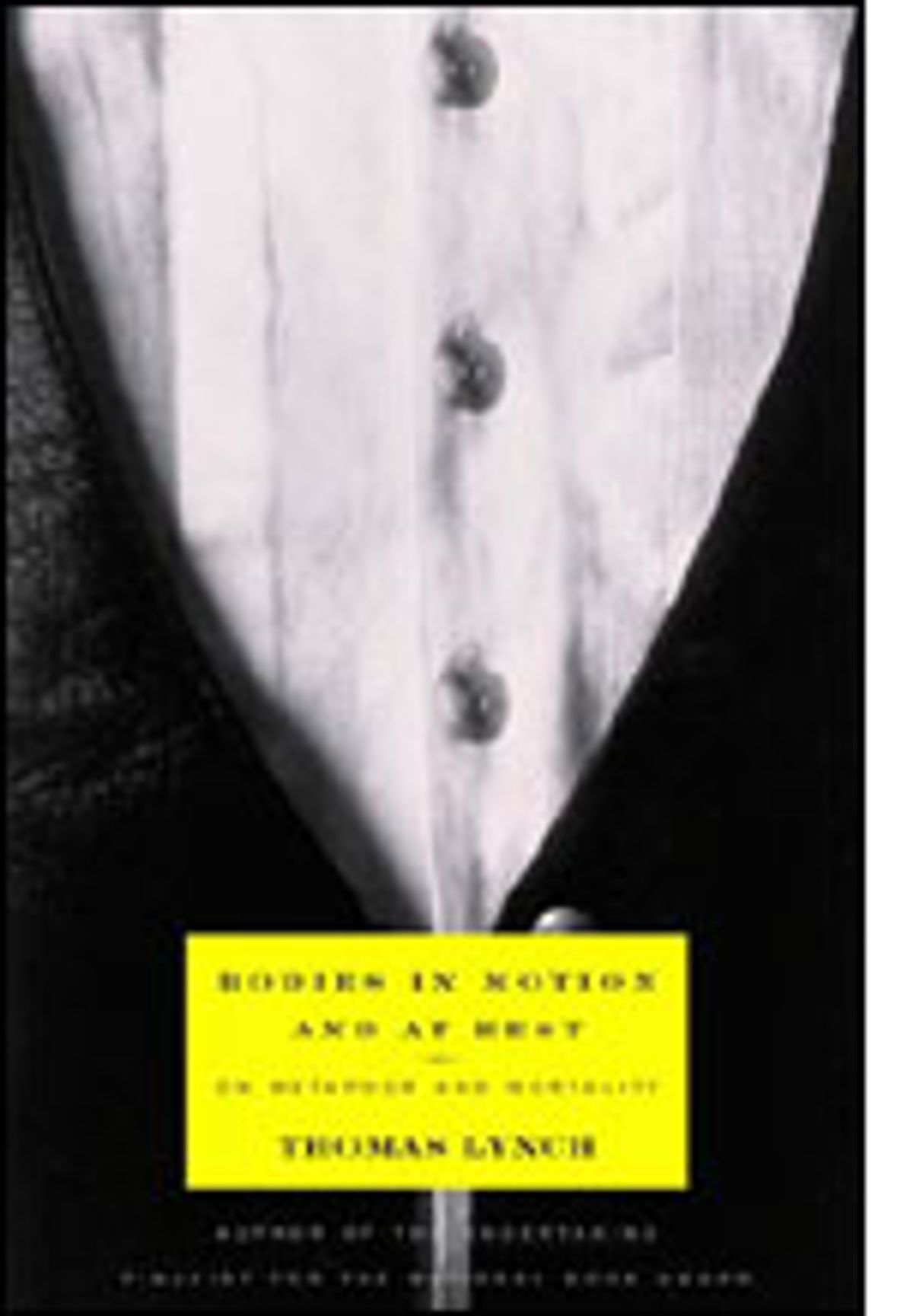 Thousands of readers have already fallen under the unlikely spell of Thomas Lynch, an essayist, poet and funeral director in Milford, Mich. Although he has plenty to say about the undertaking business that he and his brother inherited from their father, one of the many pleasant surprises of reading Lynch's essays is how quickly, in his company, we get used to the sight of dead bodies, how soon they become the least interesting part of his job.

Despite a suspicion ("widespread among the women I've dated, local Rotarians, and friends of my children") that any undertaker spends his days acting out our own morbid fascination with the dead, Lynch looks on the sight of death with absolute, stoical uninterest. "Being dead," as he explained in the title essay of his first collection of essays, "The Undertaking,"

is one -- the worst, the last -- but only one in a series of calamities that afflicts our own and several other species. The list may include, but is not limited to, gingivitis, bowel obstruction, contested divorce, tax audit, spiritual vexation, cash flow problems, political upheaval, and on and on and on some more. There is no shortage of misery. And I am no more attracted to the dead than the dentist is to your bad gums.

After a few pages, neither are we, and it comes as no surprise to us that, embalmings and funerals aside, Lynch has an interesting life and writes just as well on any number of other subjects, including friends and relatives in Michigan and Ireland, the alcoholism and Catholicism that run in his blood and the practice of writing poetry. (Lynch is also the author of several collections of verse.)

As an essayist, Lynch is eclectic and freewheeling. He'll eulogize a sexton or sketch an eccentric poet friend in a witty, sentimental, hyperbolic style that Charles Lamb would approve of; he'll slip secretly into blank verse or ballad meter when the mood is on him or, just as easily, into Strunk-and-White plain style or Irish-American slang or the locutions of the Bible. St. Paul is one of his touchstones. So is Kurt Cobain. Lynch is literary and measured without prissiness. He'll curse when he wants to. When he feels like it, he'll even rhyme. (On sex and death: "Both are horizontal mysteries. Both make you think you should have spent more time on your knees.")

This resourcefulness sets Lynch apart from the run of contemporary essayists, makes him sound at once less antiquarian and more in line with the living traditions of the form. But perhaps what distinguishes him most of all, among writers today, is his mastery of the lost art of the veer: In his new collection, "Bodies in Motion and at Rest," he'll shift, without clearing his throat, from the loneliness of hotel rooms to Adam's fall, or from the reasons he hates a cat to the breakup of his first marriage. At a moment when the magazine piece reigns supreme, with its specious hinges, its emphasis on polish and closure and word count, it is a pleasure to read someone who writes with faith in his own sense of direction and whose faith is grounded in having lived a thoughtful life. You return to his essays, in part, because they're so deeply, believably roundabout.

Since the publication of "The Undertaking," Lynch has become, very justly, a writer in high demand, and his work appears in places as unlikely -- for an expansive writer -- as Newsweek and the New York Times Magazine. Now and then, in "Bodies in Motion," this new promiscuity shows. A few of the essays seem thin and made-to-order. Lynch has always flirted with folksiness; sometimes in this collection he goes all the way and slips into cracker-barrel arguments, castigating both sides of the abortion debate, for instance, with the apergu that "the reproductive life of the species is not a woman's issue. It is a human one. It requires the voices of human beings. And the language it deserves is intimate."

This kind of writing (you can imagine Don Williams setting it to music) goes with the photo on the dust jacket of Lynch in a black homburg and bow tie and retro specs, the embodiment of small-town virtue circa 1900. A book review may not be the place to attack a publicity photo, but when I hear the good gray homilist of that picture permit himself one more hopeful, agnostic wrap-up to an essay full of rigor, or remind me that "our hearts beat in iambs and trochees night and day," or gaze at the constellations and feel stirrings of thanksgiving, it makes me want to declare a moratorium on words like "miraculous" and "mysterious" (in reference to medically normal births), "lovely" (in reference to wives and girlfriends, especially in the act of love), "wonder" (as a noun) and "wonderment" in any connection whatsoever. God gave us the search-and-replace function for a reason, I want to say: so we'd stop making love to lovely women and wondering at the wonderment of it all.

But this impulse is rare. There are essays in "Bodies in Motion" as good as the essays in "The Undertaking," and that's as much as I can say for any recent essay collection I know. I've already mentioned my favorite, "Y2Kat," which begins and ends by affirming Lynch's resolve to put his 22-year-old cat to sleep; in between, Lynch sketches one of the wisest, funniest anatomies of a divorce I have ever read. An essay like this makes me want to retract every complaint I just made about his pious shtick: A little bromide here or there seems a small price to pay for the moral sense that guides him at his best.

It's a relief -- it's enlightening -- to hear a writer so sane consider the problem of divorce (the "garden variety, amicably upmarket, suburban no-fault procedure common to my generation and our times") as a moral problem, to face up to the specific damage that his divorce does to his children. Lynch walks us toward his atonement by way of his progress as a writer: In the years after his divorce, he wrote two bitter poems -- one about his ex-wife, one about the cat -- that are revealed, in the course of the essay, as steppingstones toward the good humor and partial forgiveness of the essay itself. A masterpiece of tone, "Y2Kat" is partly about the effort to find a tone, to balance the self-absorption of the writing life and the private dramas of romance and addiction and rejection against the everyday responsibilities of raising kids -- and taking care of the nasty old cat his ex-wife left behind.

It's hard to make the writing process sound interesting, but when Lynch describes different ways of working, he is also showing us different ways of thinking about and packaging the world. In his case, there is something hard-won and decent about the essay's hereditary freedom to make loose associations between disparate things, to mix and match cats and kids and wives, lovers and poems and kids, to joke around, to spill its guts, to waver, to veer. Lynch's essays achieve a humility and transparency that his poems do not. You feel that there is a man wrapped up in them. If the personal essay, as a form, seems especially vital today, if it seems more congruent than other literary forms to everyday life -- and if capturing the everyday life that we find in essays seems more worthwhile than ever before, a challenge befitting a genuine hero of consciousness -- Thomas Lynch is one of the first we have to thank.