In the world of plushophiles, not all stuffed animals are created equal. 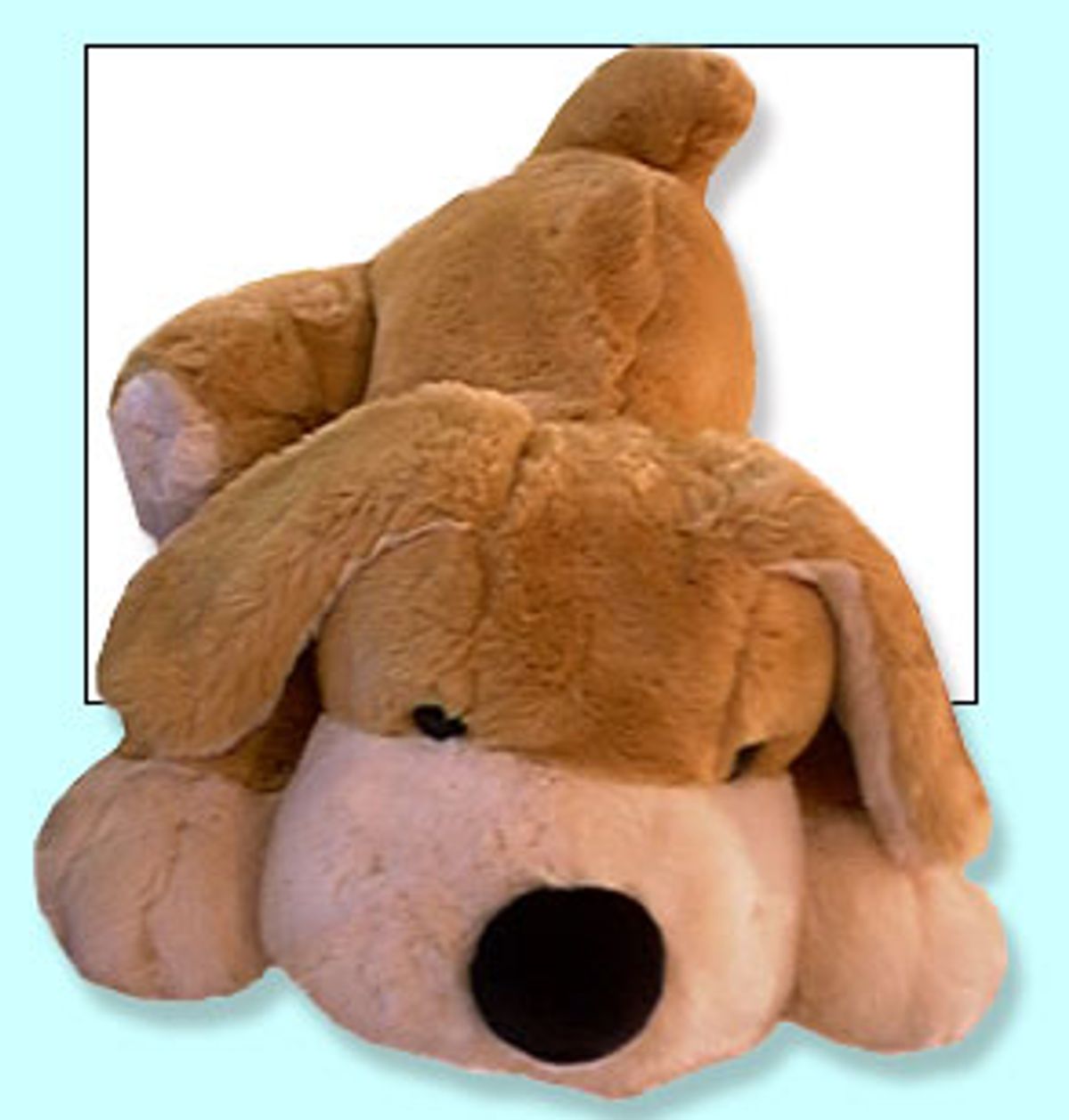 I was doing a little window-shopping recently when I happened upon one of those bondage and leather shops that used to shock members of the clergy so much back in the mid-'90s. Gazing into the store window, I was amazed to realize that the menacing whips, rubber lederhosen and shiny hardware store accessories on display no longer seem to be the trappings of some extreme sexual playground, but are more often the stuff of coy conversations held at the back of parent-teacher conferences or at shopping mall food courts. It seems that anyone looking to break new ground in the getting-it-on department anymore is faced with the burden of finding all-new ways to kick things up a notch. Hydraulics, western wear, bacon -- these all seem like good places to start. Personally, I've always been satisfied with the mere prospect of some sort of bodily friction taking place, so I never fail to be impressed whenever some pioneering spirit decides to go that extra distance behind closed doors.

Galen, 39, whom I met thanks to the magic of the Internet, is a self-described computer nerd from Erie, Pa., who counts himself among a unique sect of stuffed-animal enthusiasts known as "plushophiles." Not to be confused with a "furry" (someone who finds delight in anthropomorphic animal characters), Galen is quick to point out, a plushophile is someone whose affections for stuffed animals -- or "plushies," as they are referred to in this scene -- reach a level that some might consider beyond standard. It is not uncommon for plushophiles to engage in assorted sexual activities with their little stuffed friends -- and Galen is no exception.

I've always held an appreciation for delicate-care fabrics, so I can certainly relate to this on some level. Still, I've yet to cross the line with a stuffed animal -- or even a down jacket, for that matter -- so when I randomly stumbled across Galen's home page (among a seemingly endless string of Web sites and Internet news groups devoted to plushophilia) during a routine evening of Internet browsing, I couldn't resist dropping him a line. Soon, phone numbers were exchanged, and before long the amiable Keystone State resident and I found ourselves chatting away like two old friends -- one of whom likes to have sex with stuffed animals. My delight was interrupted only by a nagging fear that my mother might pick up the other line at any moment.

"It started probably when I was 6 or 7 years old," Galen tells me, diving into the topic. "I guess when you're in your early years, ... you're trying to figure out what works and what doesn't, [and] I just discovered that plushies worked."

I can't help being impressed by his resourcefulness, but now I've really got some questions. I think back to my early years in elementary school and the endless string of crushes I had on my female classmates. I assume Galen has similar memories. I am wrong.

"Women didn't faze me," Galen says of his formative years. "I just figured I was into something better."

I try my best to maintain a methodical, "Yes, I see" kind of approach to our conversation, but there's a voice in the back of my head that keeps reminding me that this guy -- to use street vernacular -- fucks stuffed animals. I decide I just can't wait any longer to get the real lowdown.

"So, um, how do you have sex with a stuffed animal?" I ask, as my last shred of innocence crawls from my body and storms out of the room. I had been looking forward to my conversation with Galen for several days now, but there's no way I could have anticipated the feeling of genuine excitement that washed over me after saying these words out loud for the first time.

"Well, none of mine have an SPA (plushophile-speak for "strategically placed appendage"), Galen begins. "It's been thought of a couple of times, but part of the difficulty would be constructing one and not having it fall off the plushie. That's a problem people have dwelled on for a long time."

"It's usually just cuddling and rubbing with me," he continues matter-of-factly. "There's usually no need for the penetration."

"Um, I've read something about an 'SPH,'" I tell him, dropping some plushie parlance of my own.

"Most of mine don't have an SPH, but some do," Galen explains, as my face settles back into stunned mode once again. "It's not a requirement for me -- if it's there I'll use it and, if not, I'm just as happy without it."

I admire Galen's happy-go-lucky attitude, but picturing all of this in my head, I can't help feeling concerned about the messy cleanup all of this plushie love must involve.

"It all depends on what you allow to happen to them," Galen tells me, in a sentence that speaks volumes about stuffed-animal maintenance. "Some people wear condoms for complete protection." I don't ask.

"I'm not meticulous at all myself," Galen says of his own approach to post-coital plushie cleanup.

This last comment is only mildly unsettling, until Galen reports that he owns more than 1,000 stuffed animals, some as large as 4 feet tall. That's a lot of matted fur!

And 1,000 stuffed animals is pretty impressive no matter what you've got planned for them. Were we better acquainted, I might start calling him "Loverman" or "Wilt Chamberlain" or something -- or maybe ask him if the fact that his roommate's stuffed-animal collection tops out at a mere 400 is the source of any tension around the apartment. But all of this strikes me as inappropriate at the moment.

Lest I get the wrong idea, Galen is quick to point out that not all of the stuffed animals in his collection are sexual partners. "It's basically the same as with people," Galen says in explaining how he chooses his lucky winners. "Some you're attracted to sexually and some you're not."

Topping Galen's list of preferred partners is the Mattel-made "Meeko," a cuddly stuffed-animal version of the winsome raccoon film buffs might remember from box-office smash "Pocahontas." Meeko, Galen tells me, is the stuffed animal of choice on the plushophile scene.

"It's shaped in a way that it can be used as a pillow, so right there you got a pillow," Galen offers enthusiastically of the artificial rodent's overwhelming popularity. I'm listening.

"It's the softness, the shape and the expression on his face. Also, for those that do put SPHs on him, the seam on the stomach is lined up real well, so the modification is easy," Galen continues. "It's the perfect plush!"

(Note: When I called Mattel to inquire further into Meeko's high standing in the plushophile community, an anonymous Mattel customer service representative explained simply, "Well, he is a cute little guy.")

Naturally, with all this talk of erections in the presence of stuffed animals, the topic of bestiality eventually wriggles its way into our conversation. And much to my relief, Galen -- like the majority of the plushophile community -- doesn't "go that way." No, when it comes time to getting down to business with Meeko or one of his several stuffed bunny rabbits, Galen has something else entirely on his mind.

"I look at it like if there was a plushie that was 4 feet tall, it would come to life -- or sometimes I think of the plushies as miniature people in fur suits [mascot uniforms]," Galen says of the lovemaking dynamic. "But it's not like I'm thinking of miniature people really," he adds, beating me to my next question.

Even a guy with 1,000 potential sexual partners at his disposal gets bored every once in a while, though. Occasionally, Galen likes to up the ante by slipping into one of the aforementioned fur suits when it comes time for romance. Having spent the afternoon in a furry dragon costume once during my years in undergraduate study, I can imagine how this sort of thing might spice up a relationship. But the dry-cleaning bills would kill you. What's more, Galen tells me, a really good mascot uniform can easily cost several thousand dollars. Think about that next time you find yourself bitching about the price of a nice dinner for two.

Hot mascot uniform sex or not, there's still the issue of that awkward headgear to consider. Mild discomfort is only to be expected when leading a few cheers or navigating through crowded bleachers, but gearing up for a bit of the nasty with one of these things on is another thing entirely.

"Everybody into fur suits finds out it gets hot very fast, especially if you have the kind with full head -- you just don't last very long," Galen laments. "Some people have fans in their suits."

Galen isn't blind to the importance of compromise in such situations. "It would be nice if you could keep the head on, but sometimes it's just as good with the head off," he tells me. "It's generally preferable to have all the parts on, though."

And mascot uniform sex is not without its hazards.

"You can't ever go up to a professional mascot at a sporting event and make an assumption that they'd be into that sort of thing because there's a chance you could be very wrong," Galen warns me, as if I had told him I was about to make a beeline for the nearest ballpark, armed with a pair of box-seat tickets and a pickup line involving some clever reference to a "double-header." Then again, where's my batboy uniform when I really need it?

It seems foolish to ask at this point, but I can't help wondering whether other humans ever manage to work their way into Galen's more private moments.

"I'm not interested in just human-human [sex]; it's gotta be human-plushie-human," he says. "The person would have to be interested in plush." True, it is important for lovers to have something in common.

Galen and I end our conversation with a few parting pleasantries, and as soon as I hang up the phone, I find myself drawn into the attic of my boyhood home. As I reach the top of the attic stairs, my eyes settle on an old friend. There, nestled between piles of dusty old books and a handful of forgotten unmentionables, sits the companion of my youth, a stuffed yellow dog named Petey.

I quickly grab Petey and cradle him in my arms, doing my best to shoot him a come-hither glance while adjusting my trousers. "Will Petey understand how much my needs have changed after all these years?" I wonder to myself. I try to set the mood a bit by winding up the music box lodged in Petey's back, only to be disappointed that the muted calliope music emanating from beneath his fur isn't even close to the funky, wah-wah guitar I generally require at such intimate moments.

I set Petey back in his place, resigned to the notion that we're better off remaining "just friends." And if we've learned anything from this brief flirtation, it's that -- given the possibilities we now know exist in our relationship -- that missing eye of his was never really such a big deal after all.

Dave Hill is a writer in New York. He is author of, most recently, "Tasteful Nudes:...and Other Misguided Attempts at Personal Growth and Validation."