Israel, up against the wall

The Jewish nation must decide who's in charge: The religion, the state or all of the above. 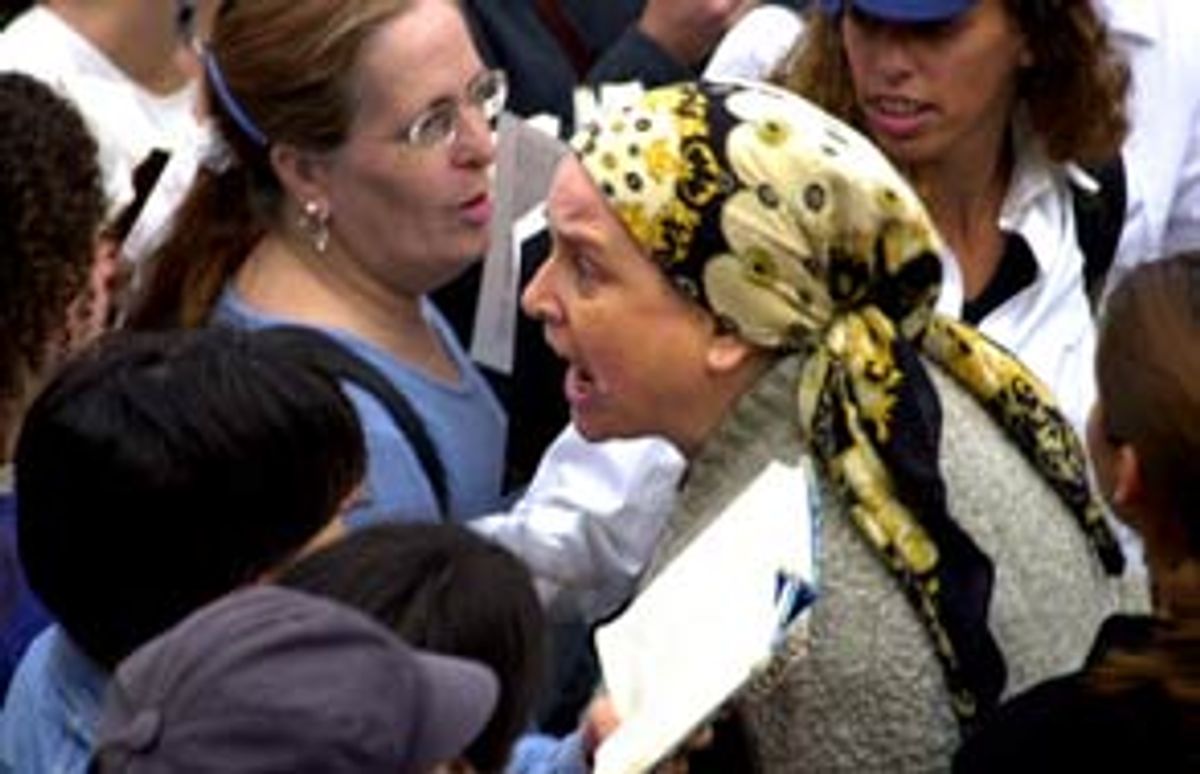 Whether the Shas party will indeed break permanently from Israeli Prime Minister Ehud Barak's coalition, or whether it has just been practicing its usual reckless bluffing this week, the ultra-Orthodox party's importance to peacemaking is as clear as ever. Bizarre as it seems, the completion of a final accord between Israel and the Palestinians may well hinge on Barak's response to the Shas demand that he order a mult-million dollar bailout of the religious schools that serve the party's poor Sephardic constituency.

And simultaneously, if less visibly, Barak's power struggle with Shas underscores a deep controversy within the nation, one with ramifications for the fundamental nature of the Jewish state: the conflict between secular and religious forces in Israel.

Last month, the Israeli Supreme Court ruled that an all-female group be allowed to conduct religious services at the Western Wall, the holiest site in Judaism and the most historically important in Israel. Because of twin claims on the massive brick rampart, one theological and the other nationalistic, the court's decision dramatically intensified an ongoing conflict over the balance between religion and the civil state in Israel.

At a time when the Barak government has been trying to finesse various compromises to avoid a direct showdown between secular and spiritual elements in Israeli society, the court bluntly asserted the supremacy of the state over religious authority.

To American eyes, the friction between Orthodox and non-Orthodox worshipers at the Western Wall appears to be a struggle about women's rights or pluralism, as the Reform and Conservative branches that dominate American Jewry vie for recognition in the Holy Land. Within Israel, however, all those issues are subsidiary to a far larger debate over the nature of the nation.

From the earliest stages of Zionism, decades before Israel was founded, the nation's secular and religious elements have been ambiguously, ambivalently and yet inextricably bound together. Now that marriage of both necessity and convenience is breaking up.

The Supreme Court ruling in the decade-old suit brought by Women of the Wall, a group of Jewish feminists from across the denominational spectrum, comes as the latest in a series of decisions that have inflamed the ultra-Orthodox community. Those decisions have also troubled the more moderate Orthodox figures trying to negotiate solutions that would stop short of bringing Israel an American-style separation of church and state.

In February 1999, well before the Women at the Wall judgment, a quarter-million haredi Orthodox -- so named because they tremble in awe at God -- had rallied to denounce the Supreme Court as a "judicial dictatorship." Meanwhile, 50,000 secular Israelis were gathering nearby to liken the Orthodox rabbinical leaders to Iran's fundamentalist mullahs and Afghanistan's Taliban.

In the wake of the recent ruling, those tensions have risen again. Early in June, the religious parties in the parliament joined with the right-wing Likud opposition to give initial approval to a bill that would establish a seven-year prison sentence for any woman reading from Torah scrolls or wearing a prayer shawl at the Wall. (The bill must pass two more readings in order to become law.) When 75 members of Women of the Wall, the group that brought the Supreme Court case, prayed there on June 4 for the first time since the ruling in their favor, they were heckled and harassed by ultra-Orthodox men.

The Barak regime's philosophy of diplomacy did pass one major test June 9 on the holiday of Shavuot. A mixed-gender congregation of Conservative Jews managed to worship without being attacked, as they had been for the past several years. But rather than pray as usual on the main plaza of the Kotel, as the Western Wall is known in Hebrew, they gathered in a separate area known as Robinson's Arch. And even though the government provided the 200 congregants with prayer books, Torah scrolls, an ark -- and police protection -- the leaders of the Conservative movement insist that they will accept Robinson's Arch only during a 12-month trial program.

"We continue to insist on our right to pray in the Kotel plaza," said Rabbi Andrew Sacks, who leads the Conservative services. The Reform movement has refused to use Robinson's Arch on even a temporary basis, with Rabbi Eric Yoffie, president of the Union of American Hebrew Congregations ridiculing the setting's "back-of-the-bus" status.

Battles at the wall reflect the divergent practices of Judaism's major denominations. The Reform and Conservative branches allow women to serve as rabbis, to read from the Torah, to lead services and to sit among men in the congregation. Under Orthodox doctrine, none of that is permitted. And because Orthodox authorities officially control the Western Wall, it operates like a gigantic outdoor Orthodox synagogue, with a mechitzah, a partition, separating men and women on the vast limestone plaza.

The Women of the Wall decision, while giving the government six months to devise an arrangement for the female congregation, brings Orthodox authority into direct collision with state power. As such, it has left would-be conciliators in the lurch.

Rabbi Michael Melchior, the cabinet minister in charge of relations with diaspora Jewry, said he fears a "terrible and violent dispute." Melchior's approach has been to build alliances between centrist Orthodox and tradition-minded Reform and Conservative figures -- to make the Orthodox establishment more flexible in practice without entirely stripping it of power over many elements of civil life. (Another example of the Barak government's approach is to allow civil marriage ceremonies if they take place in the Israeli consulate of a foreign nation, slightly circumventing the Orthodox monopoly on performing marriages without frontally challenging it.) "We can't solve the central problems in the society," Melchior told the Jerusalem Post after the Women of the Wall decision, "by forcing the hand of one side or another."

This arm-wrestling, however, has its origins in Zionism itself. When the resolutely secular Theodore Herzl more than a century ago began seeking allies in his plan for a Jewish homeland, he found precious few in religious circles, because conventional Orthodox theology held that Jews could only return to Zion when the Messiah arrived. Herzl managed to attract a more nationalistic and modernistic strain of the Orthodox, known as the Mizrachi, or religious Zionists, in part by promising them autonomy over religious life in Palestine. All he was offering, after all, was essentially the degree of authority that rabbis enjoyed in most diasporic communities already.

After the founding of Israel in 1948, Prime Minister David Ben-Gurion raised the informal arrangement to the echelon of law. The Orthodox rabbinate received monopoly control over conversion, marriage and burial rites; yeshiva students enjoyed exemption from military service, otherwise the very essence of Zionist commitment. The nascent Jewish state consciously appropriated religious imagery -- using a term for the synagogue, knesset, as the name for the parliament; choosing the seven-armed candelabrum of the Second Temple as a national symbol. In part, Ben-Gurion was practicing classic machine politics, buying off the opposition. In part, he was banking on the secular, socialist certainty that organized religion was a relic bound to die off.

Of course, that never happened. And after the 1967 War, which returned the Old City of Jerusalem and the biblical lands of Judea and Samaria to Jewish hands, many of the Orthodox who had denounced Zionism as blasphemy reinterpreted it as part of the Messianic plan. Religious parties grew so important as the swing blocs in Israel's parliamentary system that governments of both the Labor left and the Likud right required their cooperation for a ruling majority.

All the inherent instability, all the irresolution in Israel's self-definition, has now been brought to the surface. Not surprisingly, given the religious parties' influence in the Knesset, the catalyst has been the Supreme Court. In a series of rulings since the late 1990s, the court has chipped away at Orthodox hegemony. It permitted activists from the left-wing Meretz Party to protest the proposed closing of a major shopping street in Jerusalem on Sabbath. It ordered the inclusion of Reform and Conservative members on municipal religious councils that control budgets into millions of dollars. It struck down the draft deferment for yeshiva students. Just as important, the court also ruled on aspects of the corruption charges against the leader of the Shas Party, which is rooted in the underclass of Sephardic Orthodox Jews.

Religious protests against the court cannot help but remind Americans of the complaints by American conservatives that liberal courts -- particularly the Supreme Court under Chief Justice Earl Warren -- undermined the country by judicial fiat with the Miranda decision, legalized abortion and school busing for integration. One of the signs at the February 1999 rally in Israel borrowed a phrase from the Reagan glossary: "The High Court represents the elite." By this, the sign-holder surely meant the secular, Ashkenazic, former kibbutz pioneers now comfortably ensconced in north Tel Aviv.

Fittingly, one of the leaders of the Reform movement in Israel, Rabbi Uri Regev, keeps close by his desk histories of the American civil rights movement, which have served him as strategy manuals for how an oppressed minority, out-voted at the polls, can triumph in part by brilliant litigation.

For the moment, the Women of the Wall have won a victory for Jewish feminists and for Jewish pluralists. The larger issue, however, the tug-of-war between synagogue and state in Israel, can hardly be settled with a single ruling.

The first president of Israel, Chaim Weizmann, predicted the long tension in his autobiography, "Trial and Error," written just as statehood had been achieved.

"There are powerful religious communities in Palestine, which now, under a democratic regime, will rightly demand to assert themselves," he wrote. "I have never feared really religious people. The genuine type has never been politically aggressive ... It is the new secularized type of rabbi ... who will make a heavy bid for power by parading his religious convictions ...

"There will be a great struggle," he concluded. "I foresee something which will perhaps be reminiscent of the Kulturkampf in Germany, but we must be firm if we are to survive."