The Supreme Court has gone too far by banning prayer from school football games. 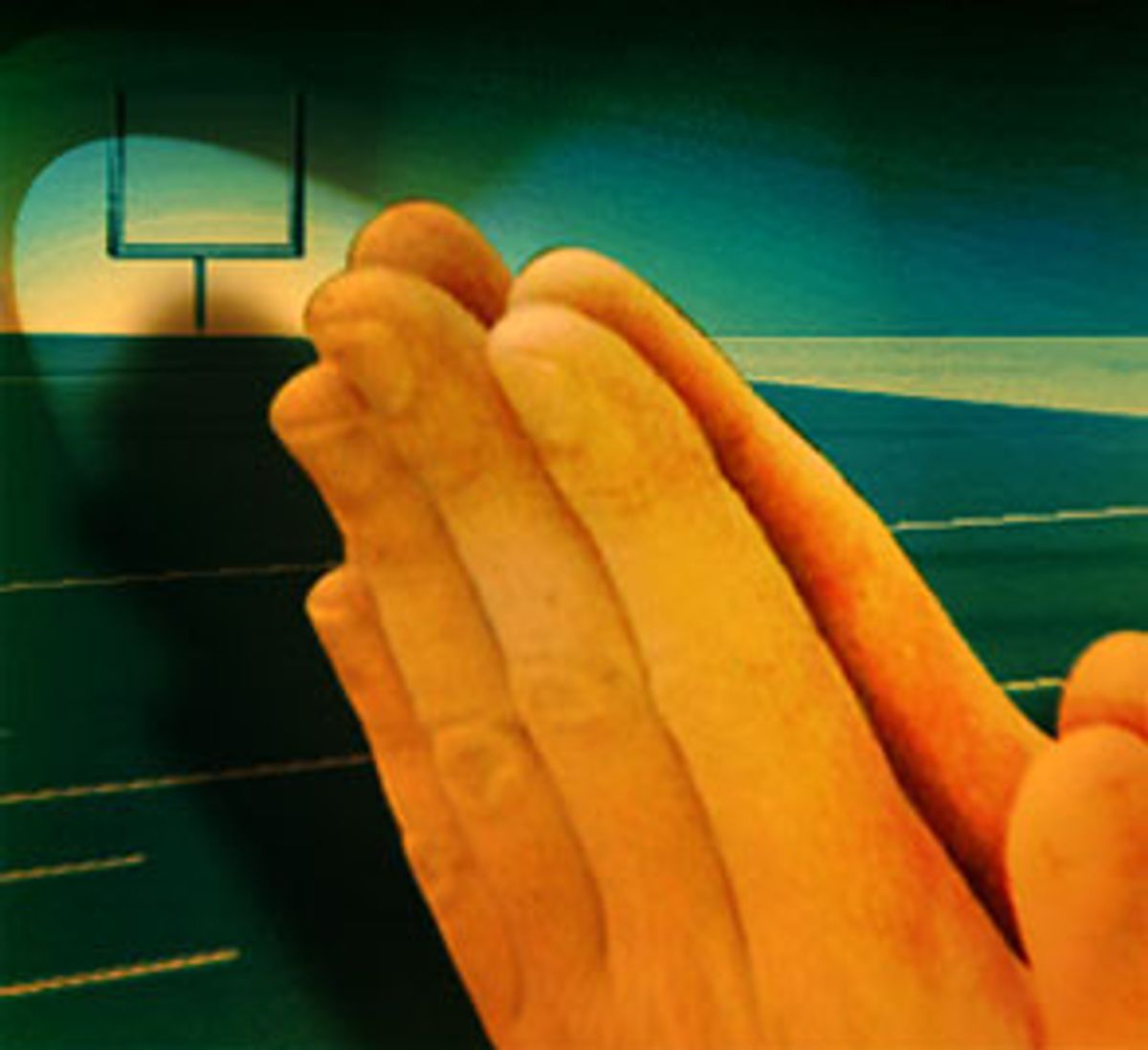 It is often said that football is the religion of the state of Texas. True. It is also a fact that religion is an integral part of football in the state of Texas. So what happens now that the Supreme Court has banned student-led prayer at football games? I'm not sure they'll really notice in California or Rhode Island. But in Texas, where the case originated, this amounts to cruel and unusual punishment.

As an educated citizen I support the court in its struggle to refine our rights and freedoms, to protect us from each other with the Constitution as its guide. I know that in this case, the justices merely bolstered a set of previous decisions that ban public worship at school functions; they essentially reinforced the divide between God and government. I acknowledge that it is a logical move, viewed within the rarefied confines of the court.

But the problem is, the court doesn't get it. The justices may know the Constitution backward and forward, but what they don't appear to know much about are the lives and lifestyles of the people for whom they work. In trying to regulate school prayer, the court forces a very awkward division between the deeply enmeshed aspects of an entire way of life. In trying to preserve religious freedom, the court is attacking it at its core.

I grew up in Sherman, Texas, a Bible Belt town situated at the heart of high school football country. On Friday nights in the fall, nearly every resident of Grayson County packed into Bearcat Stadium, the very nexus of town life. The field was lighted bright against warm night skies full of mayflies and mosquitoes. The metal bleachers were packed with people clad in burgundy and white sweatshirts, sporting giant mums with ribbons and bells. There was yelling, screaming, shouting, grunting, singing, cheering, hooping, squealing, whistling, grunting -- and praying.

For school-age kids, attendance was mandatory: I mean it literally was required, for some of our classes, to attend a certain number of games in the name of public service. Games also were a compulsory social event, where turbulent conflicts of status and friendship were pursued with impunity. We stared in awe at the wildly bouncing cheerleaders with their high hair and silver jewelry, while keeping an eye on their male counterparts, the Billy Bob Boys (no joke), who did back handsprings up and down the sidelines. We gaped, wide-eyed, at the militaristic precision of the Sherman Bearcat Drill Team, clad in satin and matching white boots and hats. We spilled giant Cokes and gloopy cheese nachos on the concrete stands.

Right before the game started there was a warbling, heartfelt rendition of the national anthem. Then came the more solemn voice on the loudspeaker, choked with giddy gravitas, to lead a blessing of the teams and a prayer for the health of the players and for God's glory to be made manifest right there on the field. (Behind the scenes, the coaches presided over pre-game huddles in which they called on a higher power to give their young players strength.)

How will the scene change when the moment of prayer, a time to exult in God, family and football, is removed from the ritual? I imagine a bitter and rebellious silence when that conspicuous gap in the night's program comes around, a moment of focused anger and indignation. How strange to think of that central blessing as being repressed by some invisible abstract influence. (I also imagine that people will find a way around it -- the loudspeaker will probably announce an optional prayer meeting before the game.)

Religious conservatives, of course, already have expressed their fury at the court's ruling. "The government's 'benign neutrality' toward religion in this country is now nothing short of malevolent hostility," announced Jan LaRue of the conservative Family Research Council to the press after the decision.

And I can see what she means. For all the court's attempts to keep schools and government neutral on the issue of religion, there is nothing neutral about this ruling. And the proposed compromise -- that individuals are free to pray any time they choose as long as they don't organize prayer at public school events -- effectively assaults the nature of their prayer.

Even as I revel in the decision's consistency with our country's unflagging commitment to secular government, I know that it is a slap in the face to the culture of Texas and places like it. To fervently religious Texans, prayer is a group activity that reaches out to everyone and everything around them. They believe that all of their work and leisure is supposed to belong to God. To separate religion from shared daily life is to compromise that religious conviction.

Justice John Paul Stevens wrote in the verdict, "Worship is a responsibility and a choice committed to the private sphere." No, it's not, not in Texas: Worship is as public as it is private. Prayer is as constant as conversation. It is the backbone of social life.

Was prayer optional at those football games? No, it wasn't. (Not unless you were to put your hands over your ears and brave some prodding from your peers, I guess.) But neither were the games, when you think about it. That was part of living in Texas. Any dissent happened, well, in private. That was the way things were. But that is not to say that Texans didn't believe that all folks shouldn't be allowed to live in peace within their own faith. This is America after all.

In Sherman, there was one Jewish synagogue, a small, inconspicuous one-story brick building that happened to sit right next to the stadium. One day our Sunday school class took a tour there and learned about the Torah. The rabbi, bless his heart, mentioned that he often competed with the ruckus of that other ritual next door as he led the Friday night Sabbath prayer. But he didn't mention any lawsuits.

Somehow the Jewish worshipers dealt with that ironic circumstance of real estate (and with missing those football games). Maybe it wasn't easy; maybe they didn't like it one bit. But it doesn't seem as if the Supreme Court's decision will help either group of religious folks deal with that situation any better than they do now.

There just isn't any way to extract religion from the daily lives or the culture of the people living in deeply religious communities. Not from their school assemblies, their graduation ceremonies, their kids' sporting events or even, sometimes, their jobs. When you're down in the thick of the scene, a rule of law set to regulate whether people pray or not feels much more intrusive and artificial than simply finding a quiet way to bow out. To the people who want like the devil to pray, legal intervention feels foreign, and hostile. And unnecessary.

I'm not saying the court shouldn't take a stand on the specific ways in which we chose to celebrate our religious freedom. But it's important to realize that the government's remedy is a drastic one. It is truly an affront to an entire culture, a way of life. It asks people to radically alter the way they live, to eliminate an important aspect of their lives -- presumably for the sake of those who live their lives differently.

It's rare that I find myself siding with religious conservatives on a social issue. I was happy to leave Texas as soon as I got the chance. But as someone who has lived in this culture, it's clear to me that for religious tolerance to work, we have to tolerate a certain amount of religion.