Beethoven, Gershwin, Respighi and Stravinsky meet Disney kitsch in this sequel to the not-quite-classic animated feature. 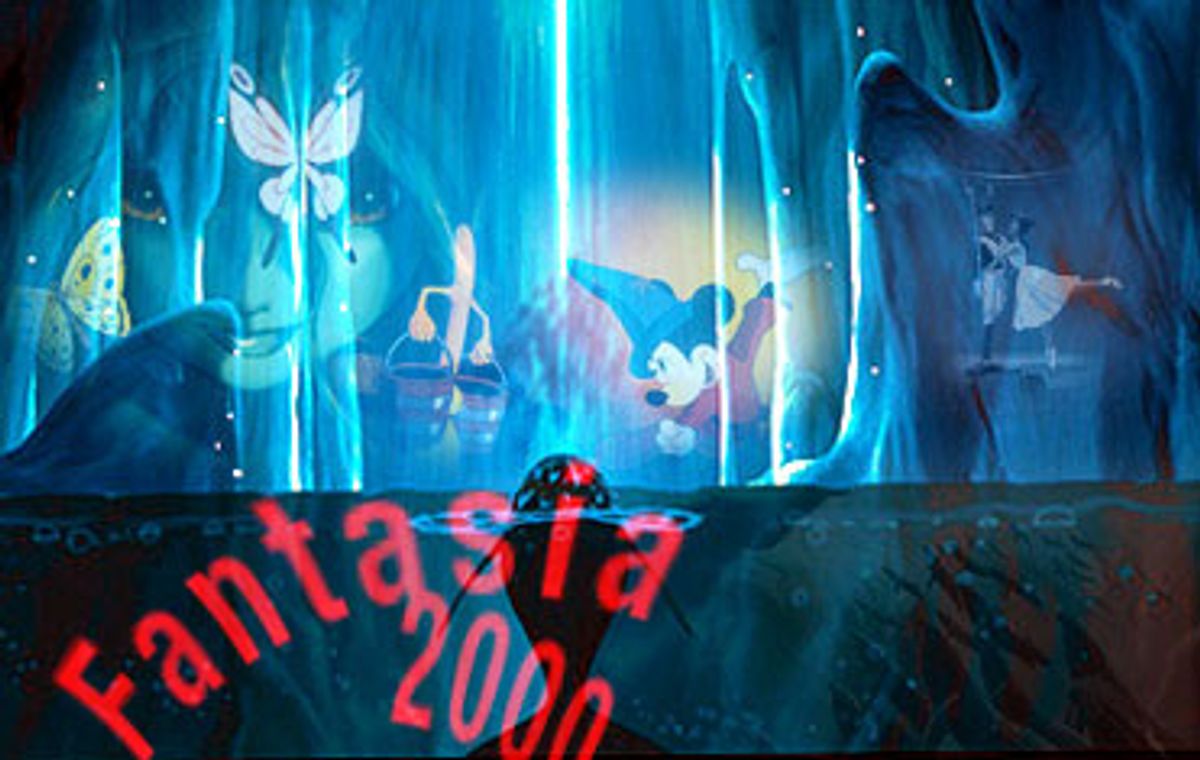 Watching "Fantasia 2000," I kept thinking back to an old "Saturday Night Live" sketch with John Belushi called "Listening to Great Music." Acting as a guide to the images conjured up by the classics, Belushi let his fantasies of stampeding horses and marauding armies take over, until he wound up smashing the stereo equipment to bits. As a concept, the sketch wasn't any sillier than "Fantasia 2000" and it was a lot more entertaining.

"Fantasia 2000" opened a run at IMAX theaters in January and has now opened on regular screens for a limited engagement. That it opened at all would once have been unthinkable. Before Disney's original "Fantasia" found a second life as a head movie, it was pretty much regarded as an ambitious flop. Since the public didn't respond to it, Walt Disney abandoned his original plan to keep the film in continuous reissue, with new sequences added and older ones deleted. ("The Sorcerer's Apprentice," with Mickey Mouse, is the only original that makes the cut here. It's accompanied by six new sequences.)

But now that "Fantasia" has been included in that blanket classic certification passed out to the animation of Disney's "golden age," the Walt Disney Co. has gone ahead with its founder's original plan. What this means is that a new generation of children will get their first exposure to the likes of Beethoven, Gershwin, Respighi and Stravinsky to the accompaniment of Disney kitsch. The good news is that the images are so forgettable, there's a good chance that they'll pass right out of the young audiences' heads. But the bigness of movies can create quite an impression at that age. And I dread to think that years from now, somebody taken to "Fantasia 2000" as a child will hear "Rhapsody in Blue" and see the cutesy symphony-of-a-city sequence based on the line drawings of Al Hirschfeld (and considerably less witty).

The prologue to the original "Fantasia" asserted that the film would be a replication of the images that might go through your head while you were sitting in a concert hall. Bunk. What really goes through most of our heads at the symphony? "Where should we have dinner afterward?" "What's my checking account balance?" "Has that old guy at the end of the row nodded off?" I doubt anyone has heard Beethoven's Fifth and seen origami-style butterflies floating free-form through pastel backgrounds, or envisioned whales floating off to whale heaven (after the temporary separation of baby whale and mother whale -- the primal childhood fear Disney has shamelessly exploited for generations) while listening to Respighi's "Pines of Rome."

Nuttiness may be part of Disney's appeal, but there's some sort of gross egotism involved in linking great music to visuals that are so unabashedly kitschy. Parody has never been part of the Disney style -- cuteness is. So Donald Duck as a harried deckmate on Noah's Ark to the tune of "Pomp and Circumstance" has a pleased-with-itself complacency that's entirely missing from Chuck Jones' marvelous "What's Opera, Doc?" which really is Wagnerian. It's not that the images aren't pretty, or that great care hasn't gone into them -- it's that the sensibility behind them is so icky, limited in its conception of beauty to picture postcards and the sort of paintings you see in chain hotels.

The music here is played by the Chicago Symphony Orchestra under the direction of James "Fuzzy" Levine, who joins Leopold Stokowski in the ranks of maestros happily selling out to schlock. The sequences are introduced by various hosts, Bette Midler, Quincy Jones, Penn and Teller, and Angela Lansbury among them. Best is Steve Martin, who reverts to the blissfully confident idiocy of his stand-up days and gets off the movie's best line: "And now I'd like to hand things over to the great Itzhak Perlman, who, I've just been told, plays the violin."

The final sequence, Stravinsky's "Firebird," set to a fable of a water nymph who regenerates a burned-out forest, seems the most Disney-esque. Watching this spirit turn blackened acres into lush greenery in an instant, the years of regrowth ignored, tragedy banished immediately from the memory, I felt as if I was seeing a metaphor for the way Disney's theme parks offer virtual re-creations of the world minus the bother of traveling to a foreign place. Putting a happy face on classical music seems just one more small coup in the vision that has occupied the Disney corporation for years: the desire to make over the planet in its image.