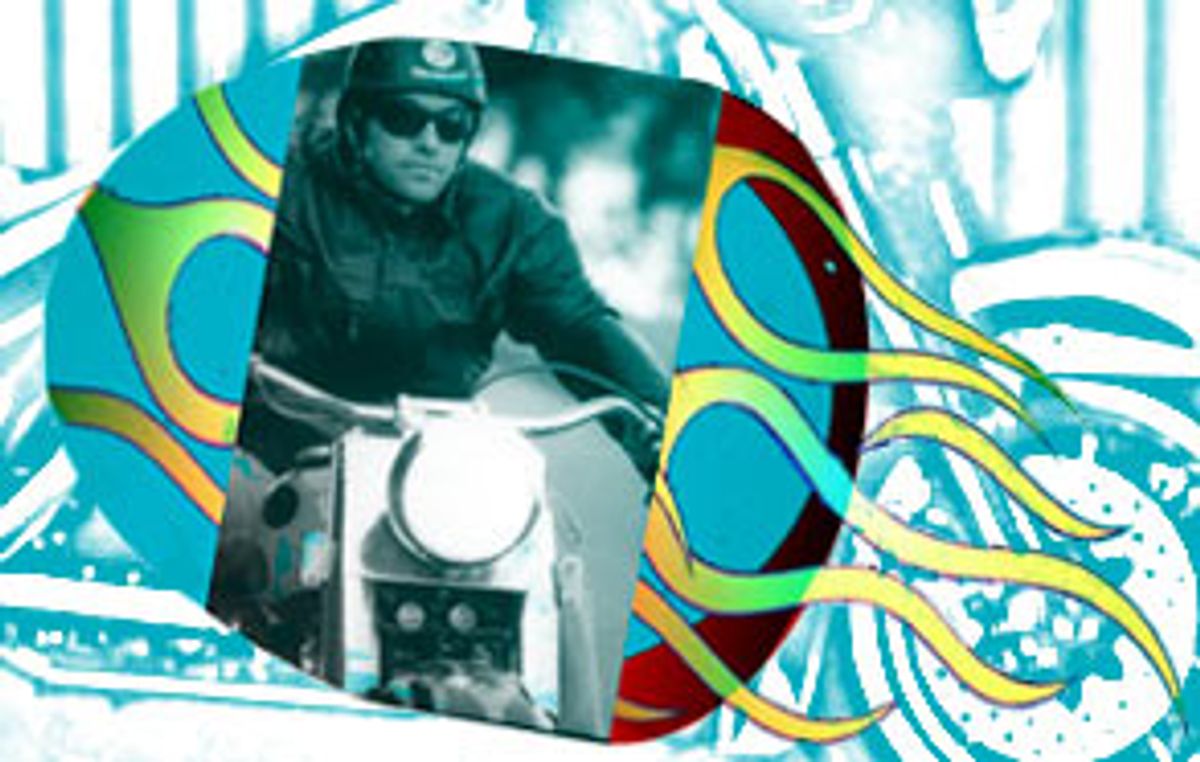 When Martin Tobias heard that Amazon was distributing his 1996 Harley Davidson documentary, "Biker Dreams," he immediately called up the retailer's site, found the video, displayed with the box's cover art of he and his wife riding into the sunset, and ordered five copies. His mother ordered one too.

But of course, it's more than funny, and Tobias didn't tell me to inspire a good chuckle. The anecdote highlights the complexities of e-commerce, Tobias says, and the importance of companies like his own. Loudeye, Tobias argues, helps media companies ensure that mistakes don't happen as they distribute their wares on the Net.

Specifically, his 340-person Seattle company, which was called Encoding.com until December, converts audio and video content to a Net-ready form accessible through software like Real Player and Windows Media Player. The company also offers consulting services and software that helps clients, including Disney, Sony, AtomFilms and others in the entertainment industry, keep a leash on where and when the content gets distributed.

Clearly, it's a business that depends on Hollywood going digital, even as the Recording Industry Association of America and the Motion Picture Association of America are on a legal rampage against any Net-based distribution systems that the entertainment industry has not yet embraced. But Tobias, 36, who spent six years in sales and marketing at Microsoft before striking out on his own, says that that attitude is changing.

Tell me you got involved in this streaming world. Did it have anything to do with "Biker Dreams"?

[The movie] is actually what got me interested in audio and video on the Net because "Biker Dreams" was an independent film -- very low-budget, no big studio behind it. It's about my girlfriend at the time, and now wife, going to Sturgis and back and all the people we meet along the way. It shows the outlaw bikers, the average bikers and the very rich bikers who ride $100,000 Harleys. But the story is us going there and back, so I guess we're the stars.

And one of our challenges was how to develop interest and excitement in a film that has a very dispersed audience who might be hard to communicate with. And we thought, hey, why don't we use the Net -- put up a Web page, audio and video trailers and a back-behind-the-scenes footage?

So we did that back in 1997 as the first project of Encoding.com, and we did it two years before "Blair Witch" used the Web so successfully to promote its film. Now, our results weren't quite as good as "Blair Witch" but when I was doing it in '97, I said, "This is going to be pretty powerful technology to promote things like this. Everyone's going to want to have audio and video as part of their standard Web experience, so why don't I start a company and see if I can make that happen sooner rather than later."

That's why we started Encoding.com, which was doing the work of convergence: You send me a tape, I'll convert it and put it on the Internet for you.

That's pretty early on. Did the company take off right away?

It didn't take off in terms of revenue, but it took off right away in terms of interest. The basic idea when we started Encoding.com and focused on the encoding part was that there were going to be four pieces of the value chain for streaming media. The first piece is the people who own and create the content, the big media companies, the major record labels, some new media studios. The next piece is how to convert what they've altered in a traditional way -- audio or videotape -- into Internet formats. That's the Encoding.com piece.

After that, it's a question of how do they handle the traffic to distribute that to the millions of people that might want to view it on the Net. Then the last part is how do users actually play the content. That's the player which is done by Microsoft and Real and MP3 and those guys.

When I looked at that value chain, I said, "I know how to do that encoding thing better than anyone else," so that's why I'm going to start the company. We probably started it early. At the time, Real Networks had only 20 million players installed, the average bandwidth was 14.4 kbps and you had to buy your sound card and video card separately. It wasn't that long ago that not every PC was multimedia-compatible. But we wanted to be early, we wanted to be the trailblazer, we wanted to be first.

And we knew that when the players got installed on everybody's machines like they are today -- and when there were specialized networks and when the record companies and movie studios actually got comfortable with the idea of their stuff going on the Net -- there would be a big market. So when we started it, everyone was interested in the technology but nobody was actually doing it.

So basically, you're an outsourcer for encoding?

That's the core of our business, the core of our revenues. But we changed our name to Loudeye Technologies because what it means to be close to the content owner, and to be the person that enables the content owner to get online, has evolved. It's not just outsourcing encoding. So now we have a consulting division that works directly with content owners to figure out how to monetize their assets and which technologies to choose. Because it's still quite confusing to choose between Microsoft and Real and QuickTime.

Loudeye's business assumes that content providers will always need a different format for the Web, but digital video technology is accelerating rapidly. Do you fear that encoding will be built into cameras or production tools. What happens then?

That's a logical assumption to make, but I doubt it will happen. Look at the bandwidth that's required for an uncompressed standard television signal; if you were to send to a computer over the Net the same amount of information and quality of signal that you would for a standard television signal, you would need 60 megabits per second of connectivity. You tell me the day you have 60 megabits per second to your desktop and I will tell you the day you don't need encoding anymore.

There is a fundamental difference between the production and the distribution of media. And what's happening on the distribution side is actually an increase in the number of formats that the content owner has to support. It used to be easy: You make a Beta copy and send it to TV studios, you make film reel and send it to the theaters. You make a VHS copy for the rental market and you're done.

But now you've got those three, plus DVD plus Microsoft plus Real plus QuickTime plus low-, mid- and broadband versions of each of those three. Plus there's new digital formats coming out every day. As the distribution side gets much more complex, I doubt there will ever be a single black box in the middle that can take care of them all for you.

What's to stop a studio or record company from doing what you do in-house?

When you add that trend onto the fact that this particular technology -- Internet audio and video -- is very early. Microsoft and Real ship new versions of their player and their server software every six months. It's not even like you can buy a Beta or VHS deck and it's going to last you for 15 years. Simply keeping up with all of those technology changes and managing and understanding all of those problems is something that the studios are not set up to do. I've invested over $15 million in hardware and I have over 150 people that are working every day to keep up with this, just in the production area. It's a non-trivial task.

How do you charge?

We charge on a per-minute of finished video and audio basis. On average it's about $7.50 per video and about $2 for a pop song. That gets you two formats or two bit rates -- a Microsoft and a Real or two Reals at different bit rates. Of course, if you want to do more formats or digital rights management, it costs a bit more.

But most major studios and record companies have reacted with scorn to Web-based distribution, suing everyone from MP3.com to iCraveTV.com. Has the general reluctance hurt Loudeye?

No. For the last six quarters, we've had 50 percent growth rates. We beat our analysts expectations by 25 percent last quarter. We're progressing according to plan very well. There are a lot of things on the horizon that could accelerate our plan and those include things like the resolution of some of these lawsuits against Napster and MP3.com. It includes faster rollout of broadband.

A few weeks ago, Michael Robertson, MP3.com's CEO told the music industry to stop focusing on selling CDs and start thinking of itself as a service. Do you think this is the way the industry needs to go? Do you think subscription services will catch on?

I think there will be new ways of experiencing music like subscription; there has to be new ways in order for the music industry to grow. The industry has frankly been flat because of the way they haven't moved. They just haven't been innovating.

But I totally disagree with Michael that the only way people will experience music is through a subscription service. It's one of the many ways. The problem is that Robertson pushed the issue by breaking copyright law and stealing content, forcing MP3.com to pay huge licensing fees to continue operating.

What about Napster -- do you think it can avoid the same fate?

Napster is another clear copyright violation. It's enabling clear and rampant piracy. They need to work with the labels to find a way to monetize that. Technologies like this have always brought radical changes. They're attitude has always been do it first and force the industry to take notice and deal with it.

Maybe it's that kind of disruptive change that's going to be needed. But frankly I don't think we need much more of it. The solution needs to be: Let's find a way to use all of these technologies to increase the total pie. They need to agree -- among the artists, the Napsters and the users -- on what is fair compensation. The bottom line is that people need to get paid and if they don't, they won't make music.