Testimony in the civil case focuses on an alleged helicopter attack on the Branch Davidian compound. 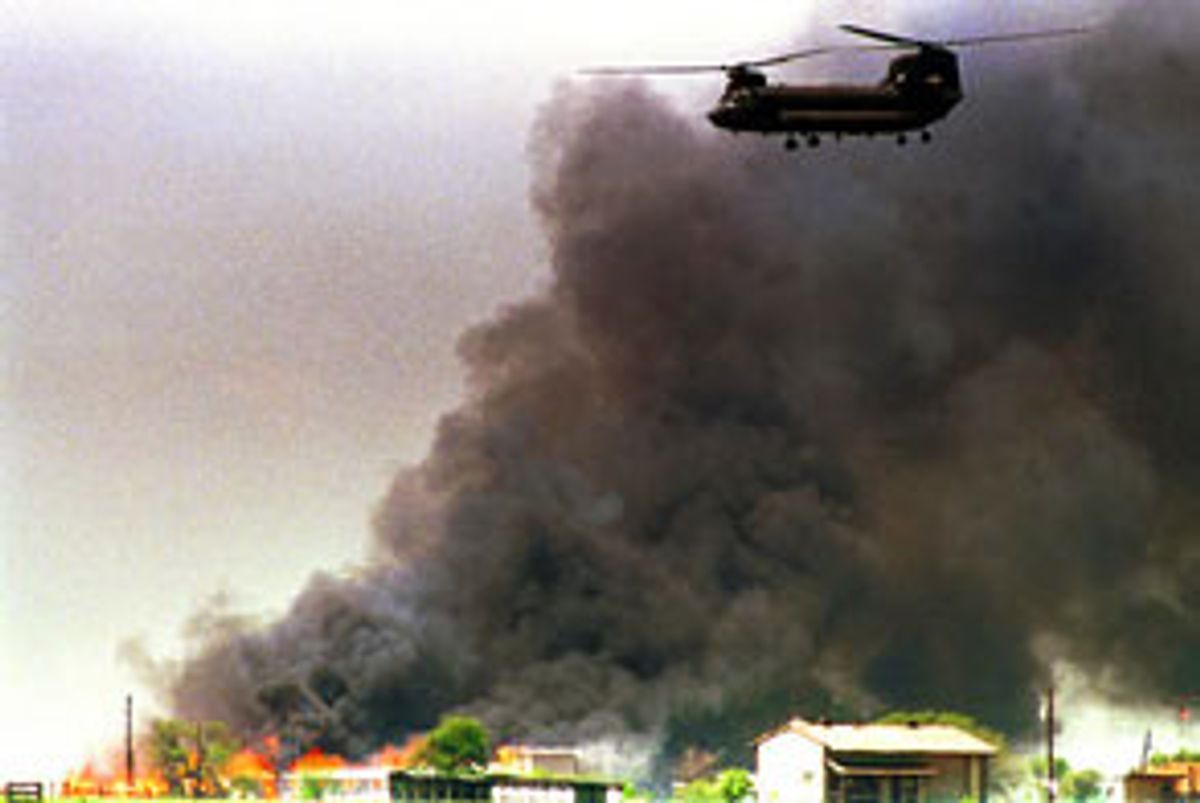 And the image of government helicopters firing on her and other Branch Davidians during the initial assault on the sect's home near Waco in 1993 is one Marjorie Thomas can't shake.

Thomas, one of only nine people who escaped from the burning ruins of Mount Carmel during the final hours of the 51-day siege, testified in court Monday that Bureau of Alcohol, Tobacco and Firearms agents fired at her as she looked through the window of her third-floor room on the building's north side during the agency's raid against the Davidians on Feb. 28, 1993.

"I could see the gun from the helicopter, and then he fired," she said. "The bullet came through one of the other windows in the room. We all got down on the floor. By this time, some more of the bullets were coming through the sheetrock and coming across the room."

Despite her claims, Thomas' memory proved less reliable under cross examination. Nevertheless, she is one of several Davidians who allege that the ATF fired on them from the choppers. And the mere allegation renews the debate over exactly what happened when the ATF tried to serve a search warrant on David Koresh and other Branch Davidians.

But ballistics tests were never performed on the weapons carried by the ATF agents who rode in the helicopters; and all the physical evidence, including bullet holes allegedly made by the airborne agents, was destroyed by the fire that consumed the complex.

Two non-Davidians who went inside Mount Carmel during the siege, attorneys Jack Zimmerman and Dick De Guerin, both testified before Congress in 1995 that they saw bullet holes in the ceiling of the building that could only have come from above. The two attorneys were representing Koresh and Steve Schneider, his No. 2, and were allowed inside the building during negotiations. Zimmerman, a former combat artillery officer and colonel in the Marine Corps Reserve, described the holes in the ceiling as "exit holes" and told investigators from the Texas Rangers that there were only two possible explanations. "You can have a guy standing on the roof shooting in, and it would look just like that, or you can have someone shooting from a helicopter," he said.

Fueling suspicion about the gunfire is a telephone conversation between Koresh and ATF agent Jim Cavanaugh that occurred shortly after the raid. Cavanaugh started the conversation by saying, "We need to set the record straight and that is that there was no guns on those helicopters." The comment enraged Koresh, who told Cavanaugh, "You're a damn liar." After a few more testy exchanges, Cavanaugh changed his story. "What I'm saying is that those helicopters did not have mounted guns. OK? I'm not disputing the fact that there might have been fire from the helicopters," Cavanaugh said. After that admission, Koresh cooled off and the two began discussing other issues.

The 1996 congressional report on the Davidian incident states that no gunfire came from the helicopters. "The helicopters were unarmed," it says, and "no ATF agents fired from the helicopters." The report says the Texas Rangers came to the same conclusion. However, the report adds that it doesn't appear that "senior ATF or Treasury officials gave any consideration to the negative image of military helicopters being used as part of a raid on American civilians."

Although the government continues to deny it fired from the helicopters, the issue gets clouded by its assertion that its agents were allowed to shoot from the choppers. The ATF agents "were authorized to fire back in response to being fired upon by the Davidians," said Bradford, who added that the government will be presenting witnesses to discuss the gunfire issue.

Several observers have reported that the helicopters were indeed fired upon by the Davidians. In fact, one of the three choppers was forced to land after it was hit. But if the ATF agents were authorized to fire if fired upon, would they show restraint?

Clive Doyle, another Davidian who escaped on April 19, 1993, believes they did not. Doyle, who has become one of the leaders of the Davidians and is attending the trial, saw numerous holes in the water tower and in the ceiling on the upper floors of Mount Carmel that convinced him the choppers fired at the Davidians.

"All the holes were coming in at an angle," he said. "The bullet holes weren't straight in. The bullet holes on the outside of the tank were far higher than the ones on the inside. They couldn't have been made by someone shooting from the ground."