Forgive the big, messy, flag-waving folly of the men who made "Independence Day" and "Braveheart" -- this bloody celebration finally gives the American Revolution the epic it deserves. 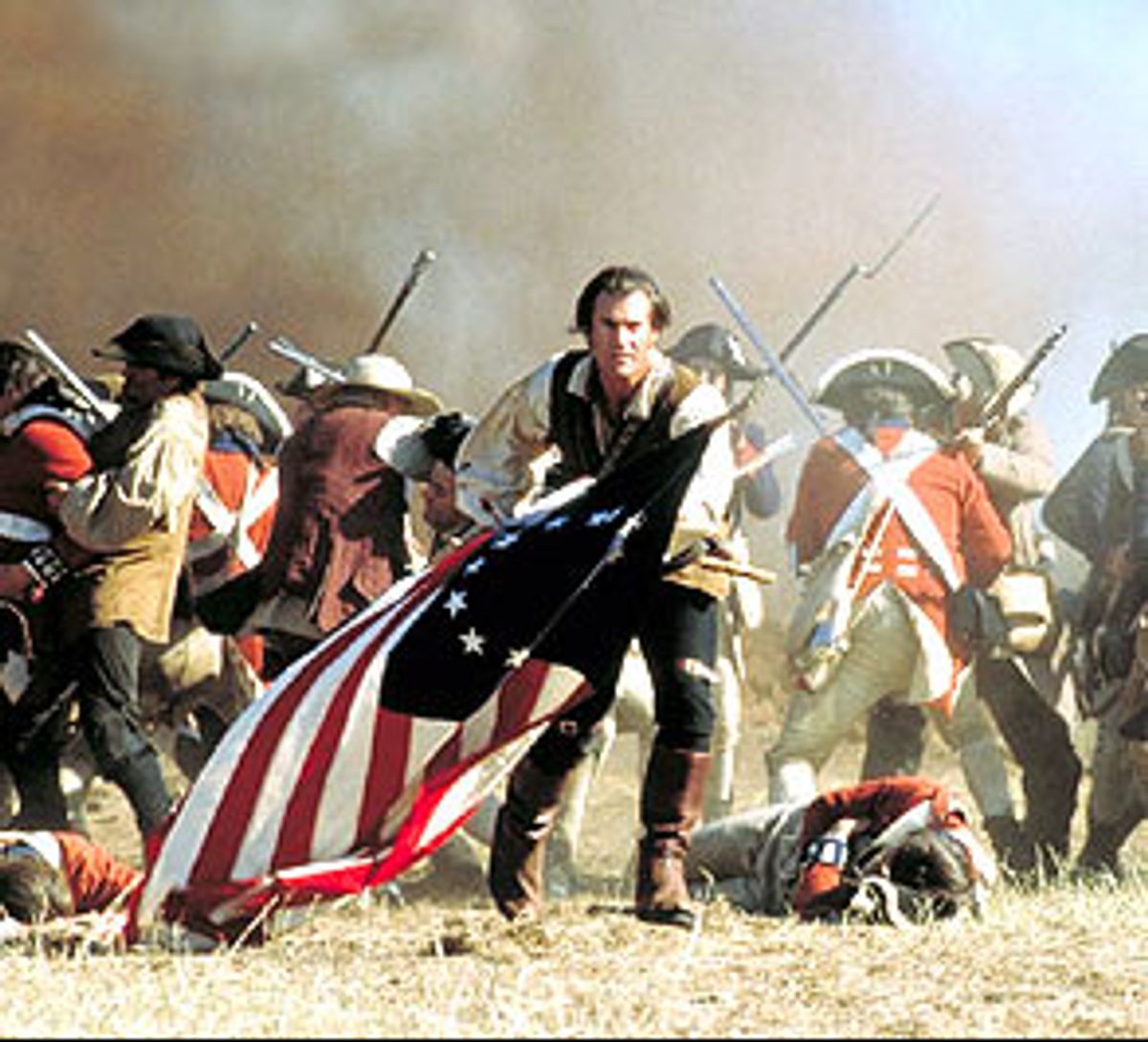 Like most war movies, "The Patriot" has a divided spirit. On one hand, it must remind us of some universal banalities: War is a grotesque and brutal business, in which nobody really wins. On the other, it must lure us into the carnage as an eager, even bloodthirsty, cheering section, convincing us that the struggle it depicts -- in this case, the American Revolution -- although terrible, is ultimately righteous. This bait-and-switch is nothing new in war stories; you can find it from "The Red Badge of Courage" clear back to "The Iliad."

What's surprising about "The Patriot" -- a Hollywood agent's fantasy project, bringing together the star of "Braveheart," the director of "Independence Day" and the writer of "Saving Private Ryan" -- is how delicately it manages this balance between cautionary tale and berserker bloodlust. Yes, this is the kind of big, messy, flag-wavingly sentimental blockbuster you'd expect from director Roland Emmerich (whose other films include "Godzilla" and "Stargate"). But it has a slightly more sober spirit, a more composed atmosphere of beauty and tragedy, than Emmerich's manic earlier films, which typically give you no time to breathe, except during the platitudinous monologues.

Anchored by a gripping yet surprisingly vulnerable performance by Mel Gibson, as a family man who becomes the reluctant guerrilla hero of the war's southern front, "The Patriot" is majestic filmmaking, for all its flaws. As a compelling and immensely detailed portrait of life and death in a vastly different America, and a wrenching depiction of early modern warfare at its cruelest, it provides the American Revolution with the epic film it has long deserved. As a period piece on the nature of heroism, I imagine people will compare it to "Gladiator," but it's a better-written and less muddleheaded film, while nearly as grandiose.

Most moviegoers, I suppose, don't need to be sold on Gibson as a leading man. But for me, at least, the finely controlled emotion of his work here as Benjamin Martin is something of a revelation. Now a conspicuously middle-aged man with a furrowed visage and a thickening frame, Gibson makes a completely convincing South Carolina gentleman farmer who, despite his mysterious military past, only wants to gather his family close around him as the war clouds thicken over the American horizon. When Martin finally tells his eldest son Gabriel (Heath Ledger) the horrific story of his renowned heroism at Fort Wilderness, in the French and Indian War, there are no flashbacks, no sound effects, no upswellings in John Williams' score. Emmerich simply, and rather uncharacteristically, lets Gibson sit there and talk, and the echoes reverberate from one end of the film to the other.

Early on, Emmerich and cinematographer Caleb Deschanel illuminate the Martin farm with that shimmering, golden-moted harvest light that always signifies an antique era of contentment. It's 1776, and Gabriel, seduced by the swell of pro-independence propaganda, enlists in George Washington's Continental Army despite his father's halting, apologetic antiwar speech to the South Carolina Assembly. This war, Martin says, will be fought not on distant battlefields but among the colonists' farms and homes. "Our children," he warns, "will learn of it with their own eyes." When asked how he can square his refusal to fight with his patriotic principles, Martin answers, "I'm a parent. I haven't got the luxury of principles."

Of course we don't believe this for a second. Robert Rodat's screenplay virtually browbeats us into the understanding that Martin is both a man of principle and a man who has suffered greatly. Not only is he a widower -- somebody should compile a list of all the Hollywood movies in which a dead woman has been invoked to signify a man's depth of character -- but among his seven kids is a winsome toddler daughter who refuses to speak. (Memo to screenwriting students: Dead wife or disabled kid. Not both!) Add the history of Martin's conduct at Fort Wilderness, and Gibson's ponderous opening line, given in voice-over: "I have long feared that my sins would come back to visit me, and the cost is more than I can bear." It takes an awful lot of melodrama to live up to this buildup; Emmerich, Gibson and company just about provide it.

Those of us who have seen a movie before can guess about how long Martin's antiwar convictions will last; nobody's paying 8 or 9 bucks to see Mel sit at home in his spectacles and fret while his boys face the Redcoats' muskets. But Gibson's careful dignity, and the grace of Rodat's screenplay -- vastly superior to the normal Hollywood script-by-committee -- almost convince you that Martin really does wish this whole Revolution business would just go away.

When the war comes home to Martin's farm, first with the wounded Gabriel's return and then with the arrival of Col. Tavington (Jason Isaacs), a suavely vicious British officer, our hero still tries to resist it. While Martin stands around feebly protesting about codes of military conduct, Tavington has his house and farm burned, conscripts the black farmhands (Martin is of course too virtuous to own slaves), shoots Martin's second son and orders Gabriel hanged as a spy. Sure, we've been expecting something like this all along, but the intensity of the shock, and the feverish hunger for revenge, are somehow undiluted. Fueled by this explosion of grief and fury, "The Patriot" shifts into a murderous higher gear, dragging its audience after it.

Some historians may protest that Tavington's brutality unfairly caricatures British conduct during the Revolution (although his character was apparently suggested by a historical figure, the notorious Col. Banastre Tarleton), but it seems to me that the filmmakers have a larger target in view. Rodat's screenplay makes clear that Tavington is a middle-class fortune hunter seeking to carve out a name for himself in the New World, who believes he can't afford the luxury of gentlemanly conduct. He is sternly reprimanded for his behavior by the aristocratic Gen. Cornwallis (fine English actor Tom Wilkinson). But Tavington represents the true historical spirit of warfare past and future -- of Genghis Khan and the Caesars, of napalm-bombed villages and ethnically cleansed provinces -- far better than his sherry-sipping superior.

As if to symbolize his sudden transformation from father to warrior, Martin's first task is to teach his two younger boys, the elder of them no more than 11 or 12, to be killers. In perhaps the most haunting of the many scenes of violence in "The Patriot," this improbable trio ambushes a band of Redcoats on a remote road, saving Gabriel from the gallows. Sending the younger kids off with Martin's glowing sister-in-law (Joely Richardson, who eventually serves ably as Gibson's love interest), the reunited father and son become leaders of a scruffy militia band that hounds and harasses the edges of Cornwallis' immense army, disrupting supply lines and destroying shipments.

Martin's journey into heroism, and his tireless quest for revenge against the smirking Tavington and his chain of worsening atrocities, progress in predictable fashion. But the grim grandeur and scale of "The Patriot" remain remarkable throughout. Among its immense and enjoyable cast, standouts include Chris Cooper as a beleaguered American colonel, Lisa Brenner as Gabriel's fresh-faced fiancie and Tchiky Karyo as a visiting French officer.

The ludicrous spectacle of conventional 18th century warfare, featuring opposing armies blasting away at each other with cannons and single-shot rifles across 30 to 50 yards of open field, is captured in horrifying detail. (Not that the chaotic slaughter indulged in by Martin's guerrillas looks much better.) Emmerich has a tendency to flog his symbols half to death -- there's a tattered American flag that makes many tiresome appearances -- and to drag his battle scenes long past the point of viewer fatigue (or of this viewer's, at least), but he has developed a terrific eye. From the overhead view of Redcoats swarming over Martin's land like invading ants to the mournful, twilit shots of the guerrillas' swamp headquarters to the "Barry Lyndon" decadence of Cornwallis' outdoor ball, "The Patriot" is full of seductive pictures.

Emmerich's final battle sequence, in which it appears that Martin has turned the tide of the war single-handedly, is exceedingly irritating, and the film's treatment of race is, I think, disgraceful. Yes, a fair number of blacks won their freedom by fighting in the Revolution (on both sides), but to pretend that this really meant anything in a nation that would permit slavery to exist for an additional 90 years is hypocritical in the extreme. But war stories, as I tried to say earlier, are almost always distorted by the ideological perspective of the storyteller. Within those limits, "The Patriot" is a grand yarn with a sense of the weight of history and an awareness that the winners are often those who have lost the most.