This toy is not a toy

With help from the Internet, new medical thinking and a maturing sex consciousness, the huge sex-toy industry is getting huger. 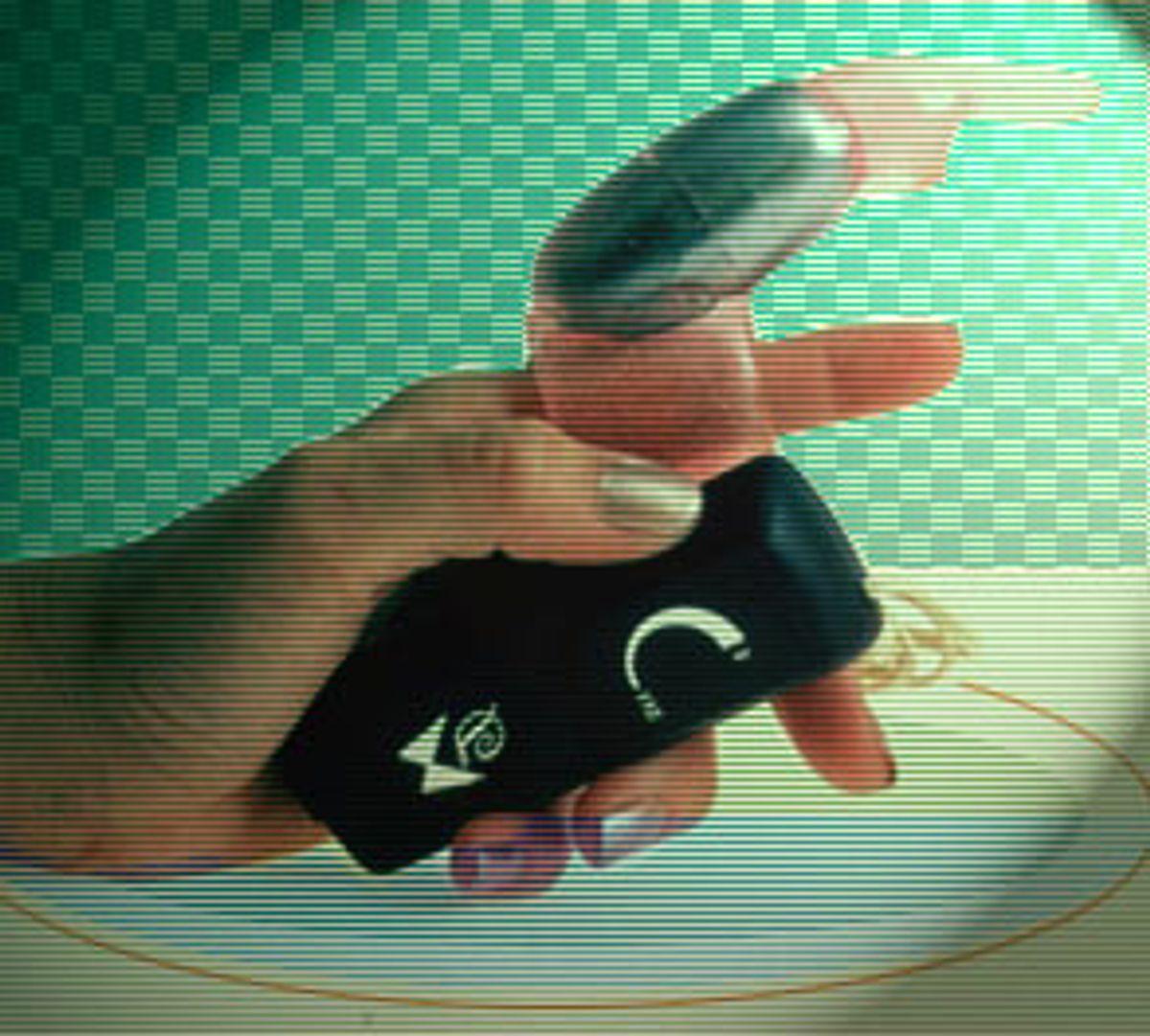 The entire adult industry, which includes the sex-toy market, brings in between $8 billion and $12 billion each year in the U.S. -- more than ever before. The Internet has cleared a portal through which the uninitiated, timid or simply curious can enter the priapic playground of sex toys, once accessible only via traditional mail order and retail.

"The Net has opened up a whole new customer base for us," says Katy Zvolerin of Adam & Eve, a North Carolina adult product company with over 4 million customers. "Women, who generally prefer more anonymity when ordering adult items, feel more comfortable ordering online. The online competition is fierce ... but our Web site has become a huge part of the picture for us."

As if these choices weren't enough, intrepid explorers can trek through the wilderness of extreme sensations with electrical toys originally used as muscle stimulation devices. Some of them seem frightfully complex: The Blowfish catalog offers a "violet wand" that comes with an industrial-strength Tesla coil power supply, hand-blown glass bulbs, 6-inch discharge tube, low-frequency voltage isolator, 30-inch electric whip and body contact pad. Despite images of electrified flesh, I'm assured that the violet wand doesn't send current through the body. Says Christophe at Blowfish: "You are far more likely to be hurt by a badly grounded washing machine."

Two of today's most successful upscale sex toy catalogs were founded by women: The Xandria Collection ("Better Living through Orgasm") was founded by Judy Lawrence, a physical therapist who started a sensual-products catalog for people with disabilities (Dodson currently serves on Xandria's advisory board), and Good Vibrations was founded by sex therapist/educator Joani Blank. Blank also worked in pre-orgasmic women's groups in the '70s and pioneered the first "sex-positive, clean, well-lighted place" to buy sex toys.

"When women talk about sex, it changes the culture," says Carol Queen of Good Vibrations. "Our perspectives have been hidden or misrepresented; any degree of change in that situation registers on a cultural level. Women have been fostered through feminism and our fervid conversations about sex into activism. Additionally, we women are creating our own sex businesses ... based on our understandings about what women want. This is bound to affect the adult industry, because it brings a more sophisticated understanding of female sexuality to bear."

A sophisticated understanding of female sexuality involves more than what turns a woman on; health issues have entered the discourse as well. "Orgasms are not only pleasurable, but healthy," says Felice Dunas, author of "Passion Play." "The sexual organs must be fully used to maintain optimal reproductive health. Just as aerobic exercise enhances heart function and weight-bearing exercises keep the bones strong, sexual climax helps human bodies regulate blood flow and hormone production."

Dr. Sandor Gardos, a sex therapist and director of the advisory board of the Xandria Collection, confirms the medical benefits of orgasm: "Sex aids are considered by all reputable sex therapists and medical authorities to be the treatment of choice for female anorgasmia (inability to reach orgasm), a medical diagnosis delineated in the Diagnostic and Statistical Manual of the American Psychiatric Association. Research clearly shows that when such medical conditions are left untreated, relationships suffer and frequently dissolve."

The medical conditions referred to by Gardos have in fact been treated with vibrators for over a century. The first vibrators were developed 130 years ago to treat "female hysteria" -- an "illness" which involved anxiety, irritability, sexual fantasies, "pelvic heaviness" and "excessive" vaginal lubrication (i.e., sexual arousal). During the Victorian era, physicians treated hysteria by massaging their patients' clitorises until they experienced relief through "paroxysm" (orgasm). In the late 19th century the first electric vibrators came on the market, still camouflaged as therapy for hysteria and available only to doctors. Slowly over the years, however, magazine ads began offering vibrators to women for self-treatment of hysteria at home, though it wasn't until early pornography films (or "blue" movies) showed vibrators openly used for sexual pleasure that the devices were liberated from the shroud of medical pretense.

The health-positive aspects of sex toys and orgasm are nonetheless ignored by a number of hot-and-bothered legislators who have taken legal action against the sex-toy industry -- an uphill battle that has been fought vigorously by many, including Adam & Eve founder Phil Harvey. Adam & Eve began as the nation's first mail-order contraceptive business, selling condoms before it got into the sex toy arena. In 1990 Harvey and five others in his company were charged by a federal grand jury in Utah with multiple counts of mailing obscene materials to customers in Utah (Adam & Eve no longer has a distribution facility in Utah) and informed that they each faced penalties of 55 years in prison and $2.75 million in fines. After spending millions in legal fees (and putting up with regular raids, police interrogations and general harassment) Harvey filed a federal civil suit against the U.S. Department of Justice.

"What is considered abhorrent about the depiction of adult sexual activity?" Harvey asked in a 1987 editorial in North Carolina's News & Observer. "Every society in history has had a way to reflect human sexuality. As long as the human race exists, depictions of human sexuality will exist." Harvey cited the Meese Commission on Pornography and President Nixon's Commission on Obscenity, both of which concluded that the depiction of nonviolent adult sexual activity was harmless.

"We condone without question almost any form of violence in the media," Harvey wrote, "even the most dreadful depictions of people being hurt, degraded, dismembered and tortured. Nowhere are such depictions illegal. Let those who argue that sexually explicit materials are harmful prove their case ... Without such proof, a determined, vocal, politically powerful minority has been trying desperately to establish a causal relationship between sexually explicit material and violent crime. After decades of effort, they just have not been able to do so."

In 1990 Harvey was acquitted by a jury of all charges -- a judgment that Harvey called a "major First Amendment victory." Not that the battle is over for sex-toy marketers. Last year legislators in Alabama tried to prohibit the distribution, sale or purchase of "devices designed to stimulate the human genital organs." (Never mind that you can pick up a semiautomatic rifle at the corner pawn shop with no problem.) In an effort to avert what they considered a "national disaster," Good Vibrations called on producers of sex toys to airlift emergency relief vibrators into Alabama while taking the case to the Supreme Court if the ban was upheld.

It was not. Last month, a federal court overturned the law. Still, many in the sex-toy business remain vigilant. Queen, a board member of the Free Speech Coalition (the adult industry's trade organization), is concerned about future threats to our constitutional right to a "pursuit of happiness."

Indeed, the pursuit of happiness is right up there with the right to bear arms, and in this context sex toys are rooted in a venerable American tradition: the right to unlimited choice in the service of do-it-yourself personal pleasure 24 hours a day, seven days a week or your money back.

That said, my range of experience with sex toys does little justice to the sensual opportunities available. One regular Good Vibrations customer, Kristin Herrera, seems to speak for millions: "Lots of avenues are opened up that lead away from boring, vanilla sex. Sometimes they're naughty, sometimes they're necessary, sometimes they get in the way. My sex life would be diminished without them."

Annie Auguste is a pseudonym for a writer living in Los Angeles.