When the match didn't take, I wound up with Merle Haggard. 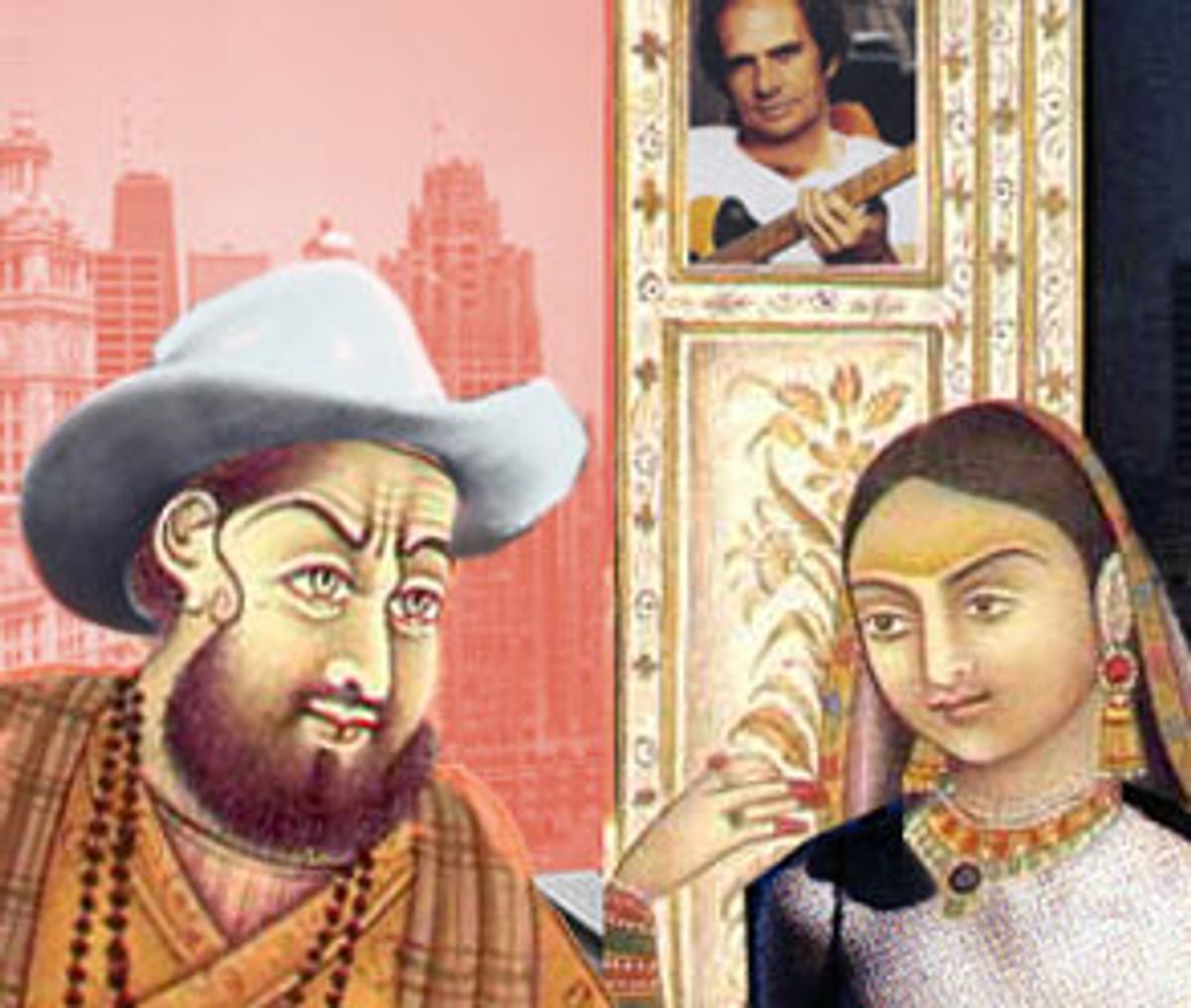 In the days before last Christmas, a girl I had never met or spoken to called me to see if I wanted to marry her. It wasn't the girl, really, but her family. And they didn't call me exactly. They called my mother.

Thus began a series of events that concluded on a Saturday night in January with me sitting in the dark, sobbing into a pillowcase, drinking a bottle of He'brew beer that I'd saved from a friend's Hanukkah party and listening to Merle Haggard. I had taken on the antiquated custom of arranged marriage, in its modern incarnation, and it had beaten me into a state of previously unfathomable self-pity that happened to include very bad beer.

This was new terrain for me. I am Indian by birth, but I grew up as a white kid in southwest Ohio. I drank beer in open fields in high school and still consider my greatest adolescent achievement the night I walked into the homecoming dance with the prettiest girl in my senior class. I worship Johnny Bench. And until last December, the prospect of an arranged marriage was an abstract idea to me, the appropriate narrative vein for someone else's story; my grandparents', my parents', even my sister's, but never my own.

Of course, I had distaste for all of it: a feeling, which informed every John Hughes movie I ever saw, that any kind of outside involvement in finding that "someone" was, well, wrong. I can say truthfully now that I felt the right girl would just come to me on, say, the Wilson Avenue Bridge in Chicago, or within the basement-level environs of the old Knitting Factory in New York. Tabula rasa. I'm here.

I believed my future would be spent in apartments on the Upper East Side or in Greenwich Village, where, my hands shoved into the pockets of a tweed sports coat, I would find myself asking a waiflike brunet why she was leaving me or coming back to me, or if she had ever loved me at all. I saw my brows furrowed and my eyes drawn close. "Jenny," I'd say, "what's this all about?"

The fact of the matter is that I have passed through nearly half of my 20s without experiencing anything close to that exchange, and I realize that, on some level, the idea of an arranged marriage has always been with me. It has served as both an emboldening force against loneliness and the precise cause of that loneliness, since it has hovered in the background as "Plan B" while I have searched for nothing less than the perfect girl.

Which brings us to the events of the past few months.

It all began with my hesitant approval of my mother's decision to start "the process." I did this without knowing precisely where or to whom that process might lead. Arranged marriage has changed a great deal since it was shipped to this country in the late '60s, having been forced to embrace the exterior trappings of a world that it is designed to circumvent. There are (or can be) phone calls, dates and months of courtship, supposedly meant to give the participants access to traits, qualities and annoying habits not obvious at first glance. More important, these new aspects of the ritual seek to first simulate, then stimulate the intermittent passion, the plain pining, experienced in unmatched love.

My own faux dating started with a match to a girl from Louisiana that never got past the picture-viewing stage, then moved to a match with a soon-to-be-graduating medical school student from Florida. Nearly giddy in the days before Christmas, my mother and father called to say that, yes, "this one" was pretty, and soon, in a hotel room in Boston, they showed me her picture -- with risumi.

The photograph showed her standing in profile, her face turned just slightly. She was wearing a sari with her hands placed over one another in an attempt to display a kind of grace. Her vita said her career goals include a "fellowship in gastroenterology" and listed her interests as "Languages, Literature" as well as travel and running. It went on to say that she enjoyed "people, social and fun loving." My father said she'd be coming to Chicago on the residency-interview trail in January and that was when I could meet her.

"For now," said my father as I sat on the edge of the bed, pretending to only half-listen while watching "The Sopranos," "we're going to just concentrate on doctors."

I met her two weeks later on a cold, sunless day. She had on a long, dark coat and a blue shawl, and a smile -- bright and assured and unironic -- that made her seem irreducibly pretty. We were, I felt, what a young couple should look like: well dressed and unwrinkled, what Eudora Welty once described as a "matched team -- like professional, Spanish dancers wearing masks."

We spent seven hours together -- beginning with a tense el ride and a tenser, chit-chatty lunch at the Berghoff meant to create casualness where there was none. Of course, the easiest way for characters in any story to address the large, overarching dilemmas and issues (Why am I with you? What is going on between the two of us? How can I make things better?) is to talk about them, which, initiated by her, is what we did.

"Are your parents traditional?" she asked as we walked around the Art Institute.

"I guess they have traditional ideas," I said. "My dad likes to play the liberal, but my mom's the real heavy. They're pretty great, though. I dunno. I mean, what do you mean by 'traditional'?"

"What do you expect out of this?"

She went on to tell me that her parents first brought up the idea a year ago, saying that as long as she was going to visit these cities, she "might as well" begin to meet "these" boys.

Listening to this, I felt my limbs entirely weaken and my head grow light. I thought about the Cincinnati Bengals' inability to keep their lead against the San Francisco 49ers in the 1989 Super Bowl, about the need for the Cincinnati Reds to pick up another quality starting pitcher. I saw my picture pasted on a bulletin board along with those of other earnest, nearsighted young Indian men. How did my looks rate next to theirs? My clothes? My hair? How did she feel when I told her that I felt unnerved around large groups of Indian people, that most of my close friends were Jewish?

I wanted to go home, but of course I didn't. Instead, I finished the museum tour with her and walked north up Michigan Avenue, talking to her about city politics in Chicago and Miami. She told me that she loved Cuban coffee, and I said that my father had raised my sister and me to drink Maxwell House black. She said there was nothing so pretty as a Florida sunset, but that she wanted to live in a place with hip, young professionals. I didn't ask but was pretty certain that she really, really liked "Friends."

"So Sridhar," she said before we entered a Starbucks, "what else?"

"About this," she said. "What are your concerns?"

That night in my notebook, I would write that I was "gripped by an acute sensation to hold her and only let go 30 or 40 years later." I know, yeech. But I suppose that a good deal of me had thought this was a moment of real definition, where she could see something that set me apart from the rest of the Sanjays and Ajays, the would-be radiologists and software engineers. The future had in fact unfolded. Now, it just needed ironing out.

Inside, over a tall mocha and a tall house coffee, we spoke about our problems with the process and what we expected from a potential spouse. She said she didn't want to get married for two more years, and that she wanted to move to Houston. Proximity, she said, was a definite issue. I expressed the sentiment that part of me didn't feel Indian enough, that I wanted someone not entirely freaked out by my intention to eventually write a novel.

Smitten is the word for what I felt. In the course of the day I had premonitions of attending her medical school graduation in May, of buying a fixer-upper in Houston's Rice Village with a large sun porch and a home office in the attic. Premature feelings perhaps, but not entirely out of line with the heightened sense that comes with these things, where every word choice, every pause, every action takes on 400 to 500 additional pounds in emotional weight.

I told her that I'd like to see her before she left town, and she said that she felt the same. When I called her two days later, however, she said seeing me again wasn't possible, that she had gone ahead and made plans with other people. "I guess," she said, "it's just not going to happen."

A pretty good piece of dialogue for someone who is not a writer, good enough to plunge me into a rueful weekend of darkness and "Mama Tried."

Since then, however, in talks with my parents and my sister, I have come to see this experience for what it was: the first match, the initial act in a process that seeks to remove the randomness from life, that deals with affection directly and is meant to eliminate the ambiguities and missed signals that plague us once we enter the love life of adults.

I'm not sure if it will ever "happen" for me, not in this way. But for now I'm willing to try.

Sridhar Pappu is a staff writer at the Chicago Reader.