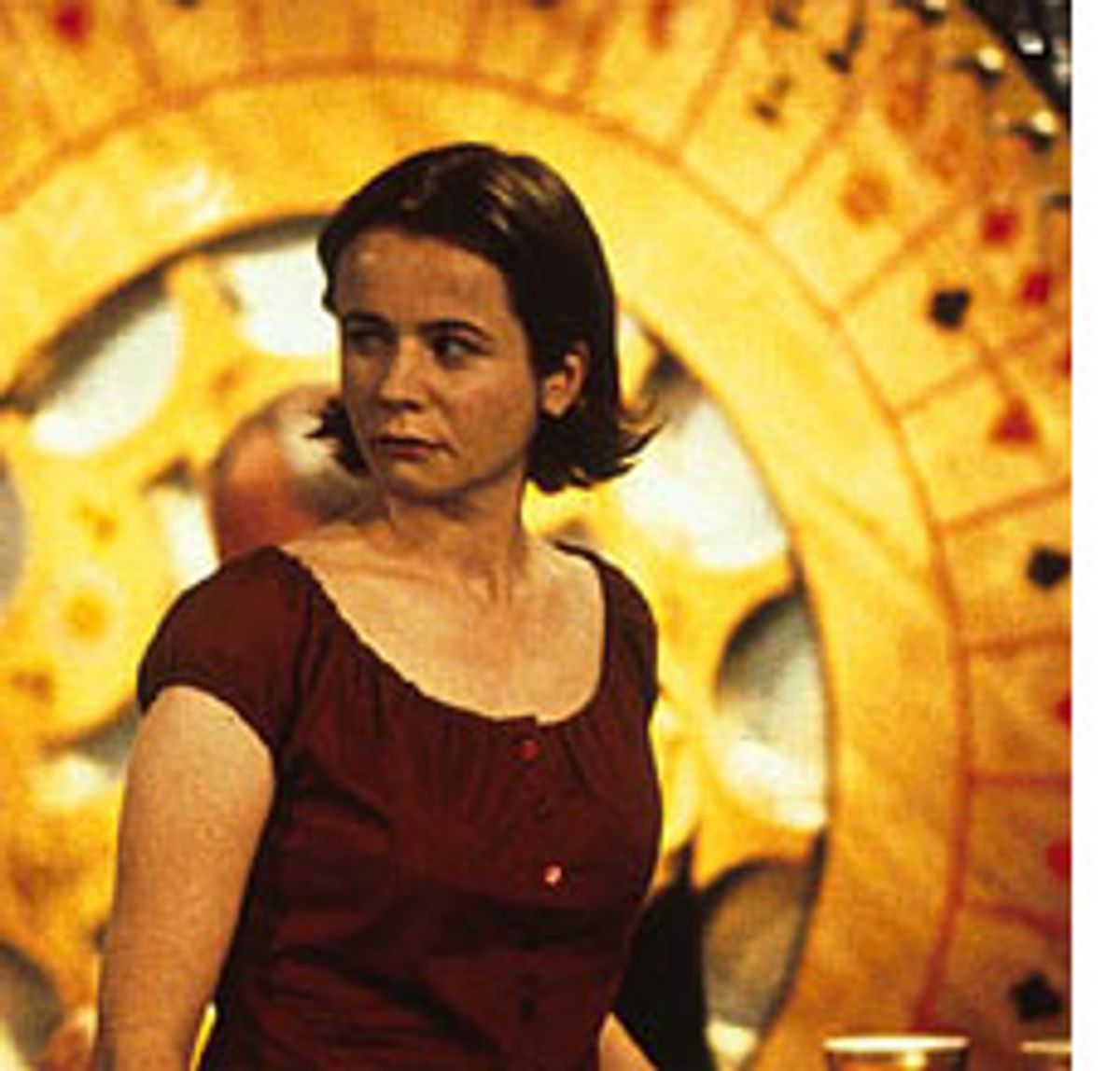 What is a movie, exactly? To most of the movie industry and the movie audience, it's a pointless philosophical question. For Alan Rudolph, it's the question he's been asking throughout his 24-year directing career. Although I have a vague, general fondness for Rudolph and his work -- especially "Choose Me," his zero-budget 1984 exploration of an L.A. singles bar -- I can't say he has ever provided a riveting answer. Even with the amazing Emily Watson as its centerpiece, "Trixie" is classic Rudolph: a tone of sweet-edged, slightly kooky melancholy, a terrific cast mostly left to its own devices and a few intriguing moments. Not, I'm sorry to say, a movie.

Mind you, I think it's admirable, if more than a little mysterious, that Rudolph is still out there, persuading some of the film world's best actors to go on his poky little rides for next to no money. He has brushed against an extremely modest variety of success a couple of times, most notably with his Algonquin Round Table yarn, "Mrs. Parker and the Vicious Circle," in 1994 and "Afterglow" in 1997, which actually got Julie Christie an Oscar nomination. But nobody expects his movies to do any box office at all, and nobody, especially the retiring Rudolph himself, would compare him to the Welleses, Buquels and Godards, the great experimenters and formula defiers of film history.

Like his friend and mentor Robert Altman (who has produced five of Rudolph's films, including this one), Rudolph not only likes actors but seems to marvel at them, allowing them virtually free rein. In "Trixie," this means a delightfully large dose of Watson as the eponymous Trixie Zurbo, a Chicago security guard who speaks almost entirely in malaprops and longs to become a full-fledged detective. For many British actors (or for a Meryl Streep-style chameleon), this kind of role would become a showcase for the "American" tics and affectations they learned in drama school. Watson is such a peculiar and forceful performer that the accent (which to my non-Midwestern ear sounds perfect) is almost the last thing we notice about Trixie.

Grinding her gum on the el train and fervidly studying Police Insight magazine, Trixie is meant to be something of an innocent abroad. Although she's some indeterminate age north of 21, she's apparently never had a boyfriend (or a girlfriend) and doesn't know how to wear a cocktail dress or walk in heels. When asked a knock-knock joke, she responds, "Come in." Although some of her malaprops have an appealing Zen quality ("There's only one person besides me who could say what I'd do -- and that's me"), I rapidly got tired of the device, which descends into Henny Youngman-level shtick all too easily. "You're out of your rocker." "That guy smokes like a fish." "I wouldn't eat steak if it was on a 10-foot pole." Oy gevalt, Alan!

When Trixie takes a job as house dick at a cheapo casino in a rundown Great Lakes resort town, we've moved decisively into Rudolph's home territory and we know what's coming: a cast of lovable oddballs! Trixie quickly becomes best pals with Kirk (Nathan Lane), the casino's ex-con, alcoholic, all-purpose lounge entertainer. Naturally Lane is a feverish force of accumulated trash culture in this role, channeling Bogart, Cagney, W.C. Fields, Desi Arnaz and Anthony Newley in blistering succession. He's great fun, but like everybody else in the movie he's just kidding around, drifting from one scene of Rudolph's patchwork quilt to the next. If Trixie's manner seems borrowed from one of the Little Rascals, Kirk's comes from one of Sydney Greenstreet's lesser roles. "Drinking myself into oblivion is my second favorite occupation," he tells Trixie. "Drinking myself into a stupor is my first. I do it to remember, or to forget. I'm never sure which."

Once Trixie is installed in the grizzly-bear-themed motor lodge with her case of Wrigley's Extra gum and a Kellogg's variety pack, she becomes the natural prey of Dex (Dermot Mulroney), Crescent Cove's resident lady-killer. Beneath his pompadour and red denim jacket, Dex is a good-hearted incompetent, and Trixie, at first bewildered by the attention, falls for him head over heels. Sometimes in storytelling less is more, and the tale of Dex and Trixie making a go of it in sleepy Crescent Cove might well have been a better choice than the directionless film noir parody Rudolph ends up with. Dex works for a sleazy local developer (Will Patton), who is up to some undefined evil with the local state senator (Nick Nolte, gleefully oozing corruption from every pore).

Pretty soon there's a drunken, malevolent boating party, a sex video starring the senator, a missing floozy (Lesley Ann Warren, still effectively playing trash after all these years) and finally a murder for Trixie to solve. But as Rudolph's screenplay (based on a story he co-wrote with John Binder) tries to thicken the plot, it paradoxically loses its focus, which should really be on Trixie's adventures as a stranger in a strange land. Most of Nolte's dialogue, for instance, is reportedly cribbed from double-talk uttered by actual politicians. It's a clever idea, but like Trixie's malaprops it doesn't really work, rendering him into a growling, cackling cipher spouting ambient bullshit, rather than a character with perceptible motives and purpose.

There's a well-handled shootout whose stupid violence is probably far closer to the real thing than most movie gunplay, along with an amusing interlude in which two snowmobile-industry lobbyists pitch ludicrous falsehoods at the senator while a hooker jerks him off under a restaurant table. Otherwise, we pretty much sit there admiring Watson's remarkable concentration as the murder plot, along with Trixie and Dex's romance, gradually recedes into Rudolph's governing mode of solitary sadness. When Trixie finds Warren's hysterical vamp character holed up in a motel room, she tries to comfort her with one of the film's better lines: "Hey, nobody's human. It's the way things are." Let that stand as Rudolph's comment on this amiable, unsuccessful movie, and perhaps on his quixotic career so far.