"But I'm a Cheerleader"

Even with the outlandish characters, gaudy colors and gay satire, this smug John Waters knockoff can't stand up to the real thing. 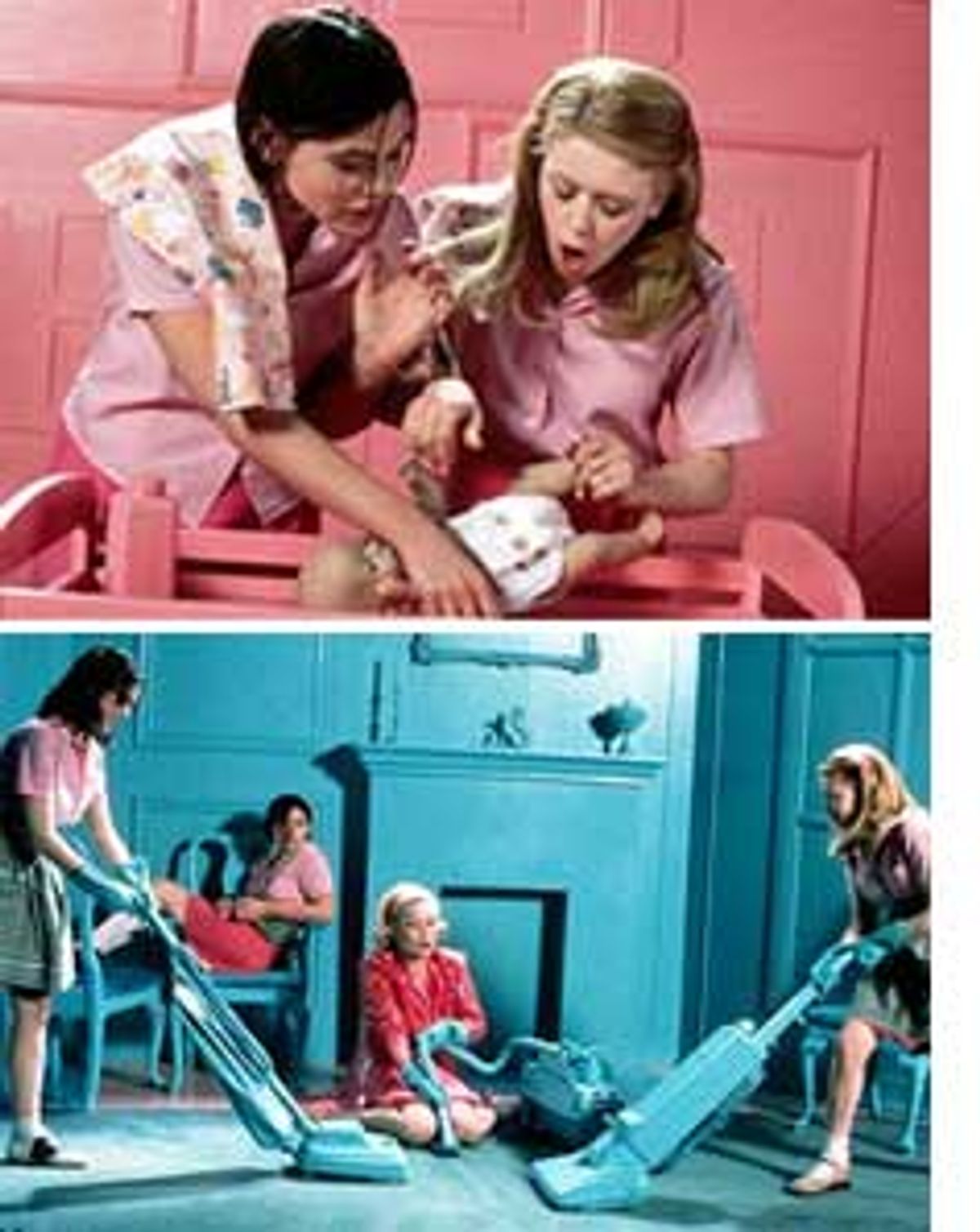 Teaching tolerance through broad humor and outrageous camp isn't an idea whose time has come; it's an idea whose time has passed. Despite its good intentions, Jamie Babbit's feature debut, "But I'm a Cheerleader," feels desperately forced and outmoded. The story of a teenager who's put into "rehabilitation" by her fearful parents is set against a backdrop of licorice-all-sorts colors. It features a cast of outlandishly over-the-top characters, but it all looks suspiciously like something we've seen before. For a picture that's ostensibly about accepting who one is, "But I'm a Cheerleader" is trying awfully hard to be a John Waters movie.

Just not hard enough. Babbit's motives seem pure: She has said that she wanted to make a movie from the femme point of view, since so many pictures about lesbians ("Boys Don't Cry" is the most recent example) feature characters who are more or less butch. And to her credit, Babbit doesn't spend a lot of time exploring, or even debunking, butch/femme stereotypes: Her heroine simply likes pink, girly things and feminine clothes, the way any of us make choices about the things we want to wear or have around us.

But Waters is clearly Babbit's role model as a filmmaker, and although he's anything but subtle, he's difficult to imitate successfully. Next to the out-of-its-gourd delirium and off-kilter sweetness of the best (or even the worst) Waters movies, "But I'm a Cheerleader" just seems garish and smug.

Megan (Natasha Lyonne) is a typical teenager who wears her hair in a perky headband, favors dresses with full skirts and lives for cheerleading. Nonetheless, her parents (played by Bud Cort and longtime Waters star Mink Stole) have noted some dangerous predilections in their daughter. With the aid of gay-man-turned-straight counselor Mike (the affable but just-prickly-enough RuPaul Charles), they pack her off to a surreally appointed rehab facility known as True Directions, where she'll be cleansed, supposedly, of all of her lesbian tendencies. There she meets a ragtag group of social outcasts like herself, including the sullen and spikily alluring Graham (Clea DuVall). Even under the careful watch of True Directions' prim, ultra-repressed director (Cathy Moriarty, whose Technicolor-loud performance could use a little bit more repression), love manages to find a way.

The two lead actresses, Lyonne and DuVall, have some sweet, fluttery moments together, but overall the picture isn't worthy of them. Lyonne has been terrific in pictures like "Slums of Beverly Hills" and "American Pie," but she has yet to find the vehicle that will do right by her sexy, doe-eyed loopiness. She never relaxes here; her suburban-naif innocence is laid on far too thickly. DuVall's character, her eyes rendered tiny and mistrustful by smoky rings of eyeliner, is the only character who emerges as a distinct individual -- barely. Richard Mall and Wesley Mann, as underground activists who've defected from True Directions, have some goofily amusing moments. But other actors, specifically Julie Delpy and Michelle Williams, barely register in the movie's scheme, they're given so little to do.

The screenplay (written by Brian Wayne Peterson, from a story by Babbit) is rendered in such broad strokes, and with such heavy-handed humor, that any innate charm it might have had is squashed flat. The jokes are sent forth on their mission like torpedoes: You can see them headed straight at you, so you have plenty of time to decide whether or not to laugh. Even the sight gags (like the way Moriarty's hunky, not-so-straight son flirtatiously wields a chainsaw) come off as sub-Benny Hill.

It doesn't help that the picture's production design all but screams out "Fun!" True Directions' decor (as well as most of the characters' clothing) is all simple, cartoonish pinks, blues and greens, with looming accouterments like those tacky '60s starburst clocks. Seeing those touches in a movie 20 years ago, in the days before most of us had caught on to flea-market shopping for kitsch, might have been great fun, but now they just seem like lazy conceptions. They're about as funny (and as original) as getting stoned and watching "Brady Bunch" reruns.

And then, of course, there are the central messages of "But I'm a Cheerleader," wrapped up in all that candy-colored coating: Be the person you were meant to be; don't let anyone try to change you; beware the strictures of society, particularly suburbia, that threaten to squelch who you are; no one should be bound by conventional notions of masculinity or femininity; and, of course, we must accept those who are different from us. If you haven't yet learned these lessons, or if you've never seen an actual starburst clock, you might get something out of "But I'm a Cheerleader," but you're not likely to go in the first place. Babbit is only preaching to the converted.

Worse yet, the movie is predicated on the embarrassingly retrograde view that most straight people view gay men and lesbians as aberrant. Of course, those prejudices still exist, and often in subterranean, dangerous forms. But we also live in a world where, out of genuinely good motives or overtly political ones, people are anxious to prove how tolerant they are. Average, reasonable people don't tend to believe that people can change their sexual orientation -- that's mostly the province of religious-extremist right-wingers. Large companies are starting to extend insurance benefits to same-sex partners; gay and lesbian unions are now legally recognized in Vermont. There are plenty of battles that still need to be fought, but Babbit seems stubbornly nostalgic for the bad old days, when the lines between camps were more starkly drawn, when blue really was for boys and pink was for girls. In this day and age, you need a few more complex, tertiary colors to get the full picture.