I love my teenage bartender

Perhaps there are some things Mexico shouldn't improve upon -- like child labor and treatment of the disabled. 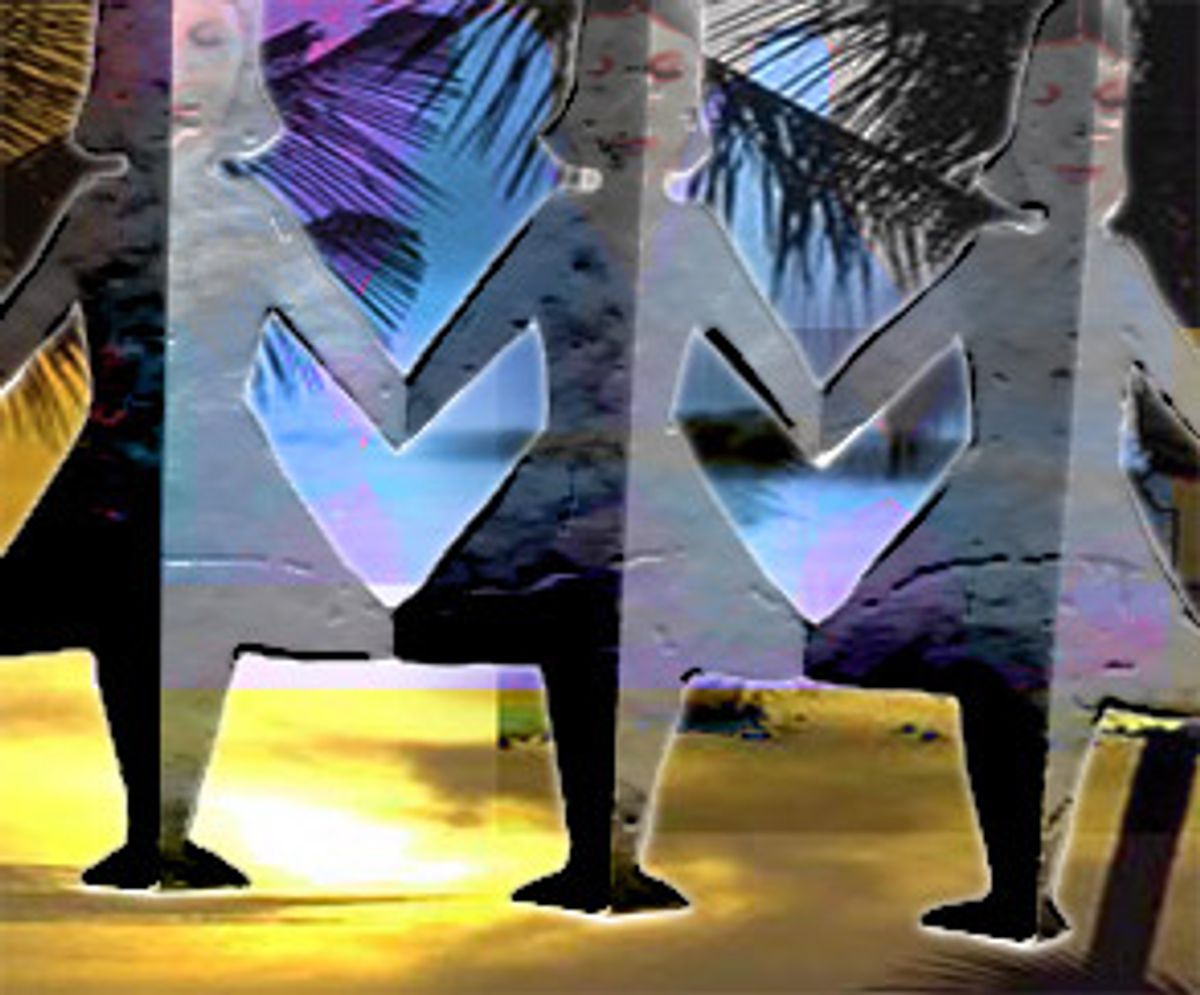 I brood about my waiters and waitresses. My favorite waitress in my favorite restaurant in Puerto Perdido is named Flor. She's a pretty little thing, takes orders conscientiously, brings the food promptly, cleans the table nicely as we are departing. I always leave her a big tip, because she is polite, bright -- and 9 years old.

When I first started coming here in 1990, Flor's sister Rosa was our waitress. She was only 10, but because of what happened to Rosa, we have great hope for her young sister's future. For Rosa is now enrolled in architecture school in Oaxaca.

When she returned home for vacation at Christmas, she stepped right back into helping her family at the Mayordomo, but told me she will continue in school, and will graduate in two years. She'll go into practice in Puerto Perdido or perhaps in Oaxaca. She positively glowed as she told me some of the intricacies of structure and form, the art of design drawings, the concept of weight-bearing arches.

I was not surprised that this lovely round-faced, soul-eyed young woman had gone into such a career -- from serving red snapper and shrimp al mojo de ajo to, someday, designing buildings. Mexico is changing radically, and the role, future and hope of women are changing even more radically. When Rosa's mother was starting out, running a restaurant and raising a family were about the only fields of employment available to women. However, in the past 10 years, I have met young women in law school, medical school, architecture school and practical engineering.

What in the United States would be a gross violation of the child labor laws is here the norm. I've seen kids of 10 or 11 working in their father's tire shop, or fruit stand, or auto repair shop. I still can't figure out who's being hurt more: they or their peers in the United States who -- because of the child labor laws -- are kept off the rolls of the working class.

Many Mexican kids start work at what we think of as a delicate age, in a family enterprise like that of Rosa and Flor. The schools are designed to permit this. Students attend either morning or afternoon classes, with the rest of the day set aside for work.

The average American juvenile, on the other hand, is probably in a school designed along the lines of a prison -- complete with I.D.s and guards -- or sitting at home eating pizza and watching "Jerry Springer" or "Survivor."

If I had my druthers, I'd choose for my child to have the path of Rosa or Flor. They are an honorable part of the family's survival. They work, and they work hard. For many in Oaxaca, there is no television to watch -- the consumer revolution has barely begun here. They also have no shopping mall to visit where they can waste their evenings and get yelled at by security guards.

Most of all, it would be unheard of for the locals to go to a concert with 25,000 peers to smoke dope and watch the Goo Goo Dolls or Pearl Jam; rather, they go to a twice-monthly fiesta with their local band -- Los Chingaderos -- at which there will be 500 people of all ages. The concerts here are a social event for everyone, not a juggernaut for juveniles.

I admit that I've seen children working at jobs that would break your heart. The guy who fixes my tires at the local llanteria is, to my distress, a 10-year-old. His father noisily supervises this backbreaking work while downing the day's seventh or eighth bottle of Corona.

But for every one of these malfeasances, I have found dozens of little people helping me with the carrots and beans at the public market, pumping gas, serving food at the restaurants, even fixing my watch, without obvious pain or suffering. The bartender at El Paradmso -- the Paradise Bar -- is probably no more than 13. He works my hours -- 6 to 10 p.m. His name is the same as mine, Carlos, and his conversation and philosophy are no better or worse than the meanderings I used to get from Bud, at the It'll Do Tavern, back when I was living in the cold north.

If Superman lived in Mexico

The rest of the world might say that Josi's is a classic tragic case. He's 21 now. Three years ago, when he was blind drunk, he fell out of the loft where he slept at night. It was not unlike the bizarre fall of Christopher Reeve -- for Josi fell in such a way that he was instantly paralyzed from the neck down.

The difference is that Josi was a poor field worker in the poorest part of Mexico. There is no government help or support system for the permanently disabled, and there is no insurance to help a family deal with such a severely paralyzed man.

They let him stay at the local hospital for a couple of months until his lungs were working properly; then, with practically no rehabilitation training, shipped him home to his wife and 1-year-old son.

Some of his friends have decided to help Josi get a ramp. We want him to be able to get in and out of his house and down to the road below without being toppled out of his wheelchair, onto the ground, which -- he tells us with no small amusement -- has happened several times.

For $300 we figure we can build a pathway that will get rid of the humps and bumps and make it possible for his wife to get him down to the street without braining him in the process.

I knew Josi slightly before the accident. He was funny, innocent, unworldly -- but quite a boozer. He's changed now. His face is sharper than it used to be. He looks a bit like a young Samuel Beckett. (Beckett always considered himself a hopeless cripple. When asked why, he told an interviewer, "The trouble with me was that I was never truly born.")

When I visited Josi last week, we talked easily of this and that -- of his two children (one born 18 months after the accident), of his wife (a good lady) and our plans for the ramp and for fixing the roof over his bedroom so he doesn't get rained on when the wet season starts in July.

Josi lives with his extended family in a compound that is a collection of four palapa huts -- made mostly of saplings, driftwood and palm fronds. There are six brothers and sisters, with their assorted wives and husbands. There are also 10 young nephews and nieces -- and several more on the way. During the course of our conversation, at any one time, at least two of the children are sitting on his lap, or climbing up and down the wheels of his wheelchair, trying merrily to distract him from his conversation.

I know that if Josi were in the United States, he would have -- at the very least -- up-to-date equipment to help him survive. Perhaps he would have a car; perhaps -- if he could badger the Supplemental Security Income people into being generous for a change -- he would have personal care attendants to help him in and out of bed, to turn him, to clean him up, to feed him.

On the surface, his situation here is terrible. There's no government dole. He has no rehabilitation equipment at all. There is no easy way in or out of the house. He has nothing other than a wheelchair and a towel tied around his chest to keep him from falling over. He has no trained help.

And yet I am wondering if he is better or worse off than his quadriplegic brothers and sisters in the U.S. He is never alone, has dozens of pairs of helping hands, day or night. There is always someone to feed him, to move him from here to there, tend to him, talk to him, play chess with him.

His brothers help him get in and out of the house; his wife, children and nieces help to clean him up; and when his own children grow to the age where they will start school, there will be a half a dozen more to care for him.

The Josi I talked to the other day lives on one-thousandth of the budget of the average spinal-cord-injured (SCI) person in the United States, and probably a millionth of the budget of Reeve. Still, like Reeve, there is an easiness to him, a brightness, that hope in face of absolute disaster.

But, unlike for most of the SCI in the north -- and in the midst of the most appalling poverty -- there's a lively bunch around Josi day and night, dozens of family and friends always there, always at the ready. The "freedom" for the disabled that we push in the United States -- with all our independent living centers -- has a price. That price is loneliness. One has only to visit the online chat rooms of the SCI to see the heartbreak of those who have learned how to be powerfully self-sufficient and, as part of their independence, often live alone (except for paid help).

The coming of a disability not only cripples the individual but the whole family. It's almost a clichi in the United States that a physical disaster like this will destroy the marriage of those younger than 35. In one frank account in "Spinal Network," a young woman explained why she was leaving her SCI husband: "It just wasn't in our marriage vows that I had to feed him, clean up after him, do his 'bowel program.'"

That attitude seems to be something peculiar to post-industrial society. Whatever it is that the very poor have (in what we often call "the backward countries") -- mute acceptance, religious fatalism, willingness to put up with family no matter how pained -- something strange and wonderful has protected Josi and those around him from being destroyed by his unhappy accident.

Carlos Amantea is the author of "The Lourdes of Arizona." His writing also appears in RALPH.