Keenen Ivory Wayans attempts a parody of a parody -- unsuccessfully -- in this spoof of "Scream" and its ilk. 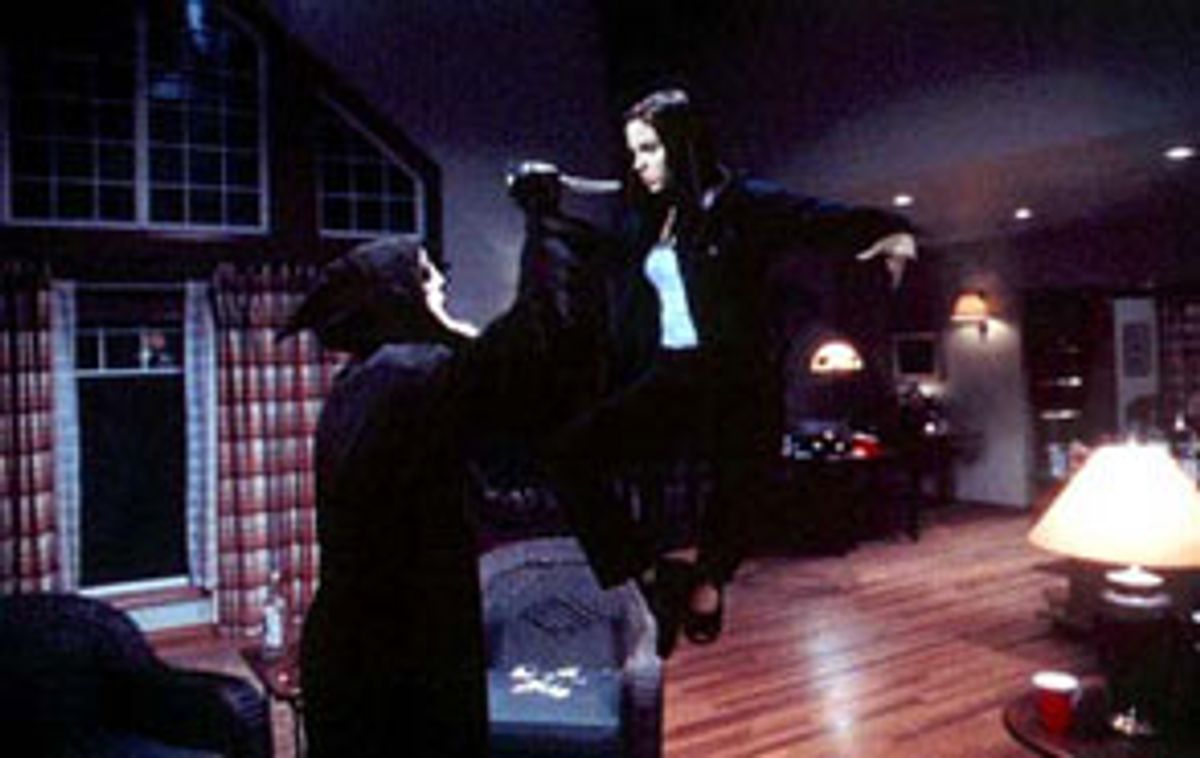 "Scary Movie" Directed by Keenen Ivory Wayans. Starring Jon Abrahams, Anna Faris, Shannon Elizabeth, Marlon Wayans, Shawn Wayans and Cheri Oteri How do you parody a movie that was a parody to begin with? "Scary Movie," which was directed by Keenen Ivory Wayans and worked on by enough screenwriters to start a glee club, is a spoof of "Scream" and the other recent teen horror movies so broad and obvious that we might be watching a blooper reel included on a special edition DVD.

The best movie parodies take aim at the conventions we know but have always accepted unquestioningly. Think of the moment in "Airplane!" when the back projection behind two people riding in a car turns from stock footage of a winding country road to stock footage of cowboys and Indians and chariot races. "Scream" is what passes for parody in an era when audiences have become so hip to the conventions of movies that they know what to expect from them before they've even bought their tickets. "Scream" seemed less a satire than a cynical way for the filmmakers to employ every hoary splatter-movie convention and make themselves appear smarter than what they were stooping to. "Sure, this stuff is crap," the movie seemed to be saying," "but we know it's crap."

"Scary Movie" doesn't offer twists or variations on the plot of "Scream" or "I Know What You Did Last Summer." It just reproduces scenes from those movies and adds gags, and not terribly good ones, either.

Wayans' models here appear to be the Zucker-Abrahams-Zucker team ("Airplane!," "The Naked Gun" series) and the Farrelly Brothers. But where the gross-outs of the Farrellys are both unexpected and oddly sweet-natured, Wayans goes for super-duper gross-outs with a calculated determination to be outrageous that kills the laughs. Absurd effects like a geyser of sperm shooting up like Old Faithful, or the sudden appearance of body parts that movies usually don't show us, are ladled on with a smug satisfaction. Wayans isn't a dirty-minded kid who can't resist dum-dum jokes (as the Farrellys are). He wants to be congratulated for going as far as he does. The greatest scatological gags spring right from the id; the dirty jokes in "Scary Movie" spring from an eye toward topping the weekend box office.

Things aren't much better when Wayans wades into the ZAZ territory of parodying the conventions of moviemaking itself. "Airplane!" and "The Naked Gun" movies had a Mad magazine approach. The gags kept arriving on top of each other, but damned if you could see where the next one was coming from. The jokes in "Scary Movie" do everything to signal their arrival except call ahead and book a hotel room.

Wayans and the writers must have realized they were running out of steam pretty early on. After a while "Scary Movie" starts raiding other recent movies and genres for parody. A parody of "The Blair Witch Project" is expected. (Quick! -- guess which bodily fluid the gag exploits.) But then bits turn up spoofing "The Matrix" and even "American Pie" (one of whose stars, Shannon Elizabeth, is treated here with the exact opposite of the affection she's shown in that movie). One bit works beautifully: a spoof of the "Scream 2" opening in which Jada Pinkett Smith is killed in a movie theater. I won't spoil it with description except to say that it's the last word on the difference between the way white and black audiences respond at the movies, and that no white director would have dared it.

Honest low comedy can be liberating, can bring back the feeling of being a kid dressed up in your Sunday best and heading straight for a mud puddle. Watching a film doing its damnedest to be deliberately outrageous is a pretty grim spectacle. I walked out of "Scary Movie" feeling as if I'd been whacked around with a two-by-four for an hour and a half. It made me feel closer to the kid in "The Sixth Sense" than I did at that movie. Watching the gags thud, you know exactly what it's like to see dead things.