A sentimental Bruce Willis stars in a perfectly acceptable, unforgivably titled entertainment in the Mouse Factory's most familiar vein. 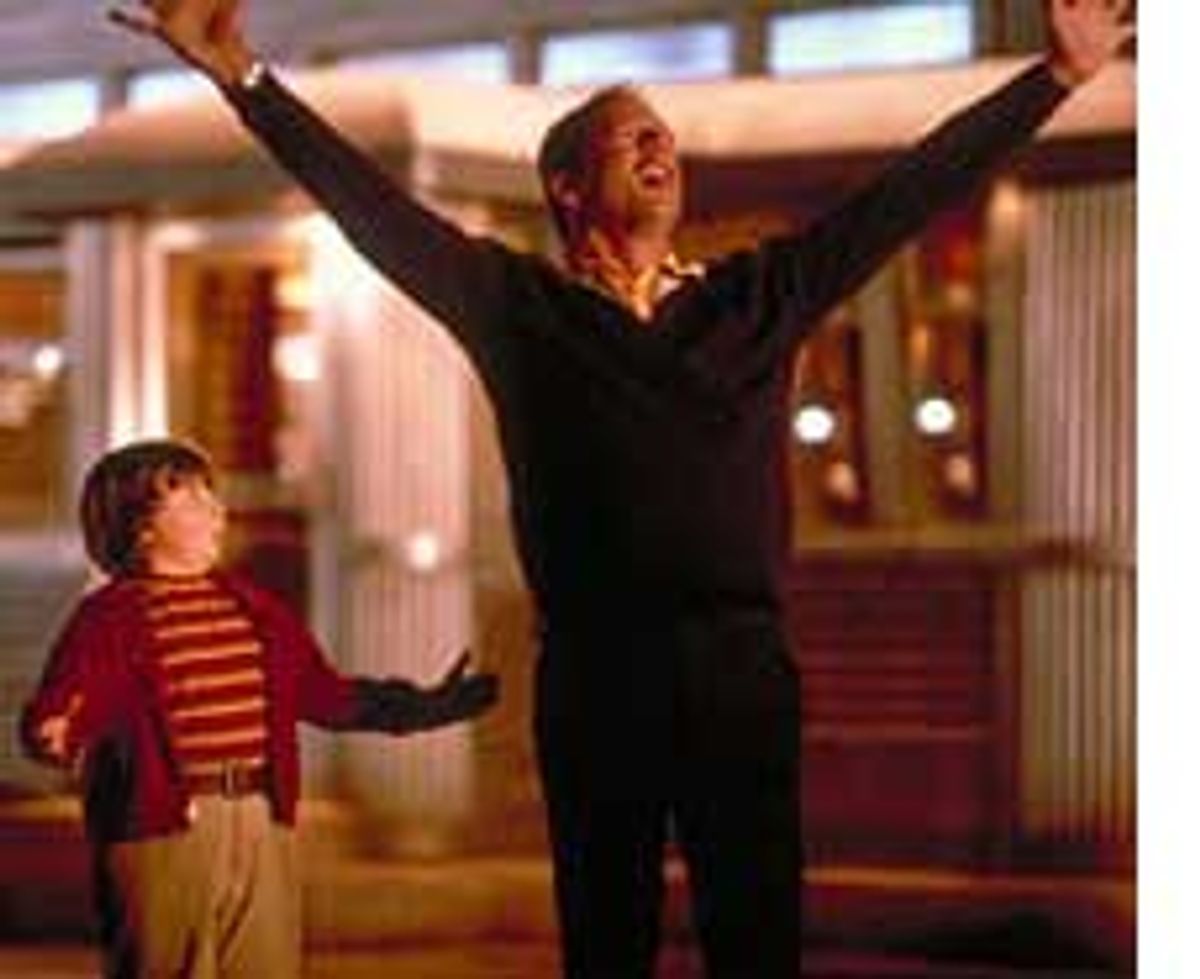 OK, it's the middle of summer, so there are all kinds of legitimate reasons why a full-grown adult of reasonably normal intelligence might wind up in the multiplex with a $4 tub of popcorn in his or her lap and "Disney's the Kid" up there on the screen. These reasons might include small children (possibly not yours), your great-aunt from northern Michigan and that old guy you call Grandpa who's really just your mom's next-door neighbor. Should you find yourself in such a situation, my advice is to lower your expectations to near-zero, attack the popcorn and laugh when the people around you do. Before you know it, the movie will be over and you won't have been harmed in any noticeable way.

"The Kid" is a sentimental fable of a cynical grownup's magical transformation, in the vein perfected by "A Christmas Carol" and "It's a Wonderful Life," and, believe me, I was plenty terrified going into it. Bruce Willis weeping! An adorable pudgemuffin tyke! A red World War I biplane, ` la Snoopy and the Red Baron, symbolizing something or other, probably the soaring human spirit! It all sounded too horrible to bear. In fact, although all the aforementioned ingredients are present, "The Kid" -- whose unforgivable official name includes the corporate logo -- is perfectly acceptable entertainment in the Mouse Factory's most familiar vein.

Director Jon Turteltaub, a feel-good veteran whose other films include "Cool Runnings" and "While You Were Sleeping," aims at everybody without quite aiming at anybody. "The Kid" is a little slow for kids and a little sappy and obvious for adults (at least those who go to movies more than twice a decade), but its sprightly performances and predictable emotions will make it widely palatable to the mixed groups of squirming, barbecue-fed individuals likely to see it.

Casting Willis as a smirking creep with a cuddly youngster hidden away inside is one of those decisions -- like having Clint Eastwood play a cop or Robert De Niro a sociopath -- that automatically drags the audience about halfway through the story. We understand exactly what it is about the uniformly despicable Russ (Willis) that makes Amy (Emily Mortimer), a gamine English rose with a mop-top haircut, stick around gazing at him with doelike hopefulness. "Sometimes I get the tiniest, briefest glimpse of the kid in you," she moons. No sooner said than done; within minutes of this pronouncement, Russ' high-security Hollywood Hills estate is being haunted by a mysterious tot in a bowl cut and husky-size Toughskins.

Willis' problem as an actor has always been that his considerable personal magnetism is undercut by the permanent penumbra of sarcasm that surrounds him; he lacks depth or breadth and can pretty much only play a sharp-dressed bullshit artist. I certainly prefer his recent persona, employing his crow's feet and receding hairline to advantage as a gently self-mocking comic lead, to his wiseacre action hero of the "Die Hard" series. He's probably got a brilliant comedy in him, if he'd only pick better scripts and directors; Wes Anderson ("Rushmore") or Mike Judge ("Office Space") or the Farrelly brothers might make terrific use of him. Here, as in "The Whole Nine Yards" earlier this year, he's pretty much coasting all the way, although "The Kid," for all its mawkishness, is far superior to the labored mob farce of "Yards."

Russ, who's about to turn 40, is an L.A. image consultant who rescues politicians and executives from the public consequences of their own lies and corruption, generally by way of even more extreme lies and corruption. When he concocts a video showing a slimy baseball-team owner getting pied in the face by little kids, to show his (nonexistent) lovable side, Amy has had enough, at least for the next few minutes. "Today we exploited innocent little children just to help some creep with his cash-flow problem," she petulantly announces.

To some extent Willis faces the same difficulty here that Jim Carrey faced in "Liar Liar," or that makes Satan seem like the hero of Milton's "Paradise Lost": Shameful wickedness is almost always more fun to watch than virtuous behavior. Russ rolls his eyes in exasperation at the demands made on him by Amy and Janet (Lily Tomlin), his enjoyably acrid secretary. They want him to engage in conversation! (Time is money.) They want him to stand around and look at the moon! They want him to visit his widowed father, rather than just sending a check! To all of this Russ says feh. We, of course, know him better than he knows himself, and the arrival of 8-year-old Rusty, played by the snub-nosed, roly-poly and agreeably rowdy Spencer Breslin, proves us right.

Rusty of course is Russ, imported through some never-quite-explained movie magic directly from the playgrounds of the Nixon era. Willis and Breslin work together delightfully, even if Turteltaub and screenwriter Audrey Wells' only real idea is to have these equally abrasive characters view one another with incredulous contempt. Rusty bangs around Russ' big, empty house, singing choruses of "John Jacob Jingleheimer Schmidt" and asking pointed questions: "Shouldn't there be a lady here somewhere?" Finding no wife, no pickup truck and no career as a pilot, Rusty soon grasps the horrible truth: "I grow up to be a guy with no dog!" At first convinced he's going insane, Russ groans that Rusty's appearance has summoned up "awful memories, memories I have been spending most of my life trying to forget."

Naturally Amy is fatally smitten with Rusty from the get-go, and when she figures out who he really is she snuffles at Russ, "You could have been great!" Just as naturally, Russ tries to hold out against the lessons imparted by his younger self as long as he can, although his career as an evildoer is clearly a lost cause. Eventually, the biplane that's been buzzing Russ throughout the film makes another appearance, games of Go Fish are played and Russ gets some advice from a busty Texas anchorwoman (Jean Smart) in a bar. It's time for Russ and Rusty to head back to 1968, rescue a three-legged dog (I'm not kidding about this) and figure out how and why they turned into such a heel.

About the time you're heartily sick of Marc Shaiman's treacly score and Mortimer's repertoire of melted-butter facial expressions -- and the children around you have become incurably restless -- all kids, dogs, women and biplanes are restored to their proper place in the universe. Sure, "The Kid" was everybody's third choice, but nobody died of boredom or was mortally offended, and Aunt Harriet made it through her first complete movie since "Bell, Book and Candle." I believe you've earned a slice of pie, and quite possibly two.