The silence of the Pill

The FDA may make oral contraceptives available over the counter -- and neither pro-life nor pro-choice groups seem to care. 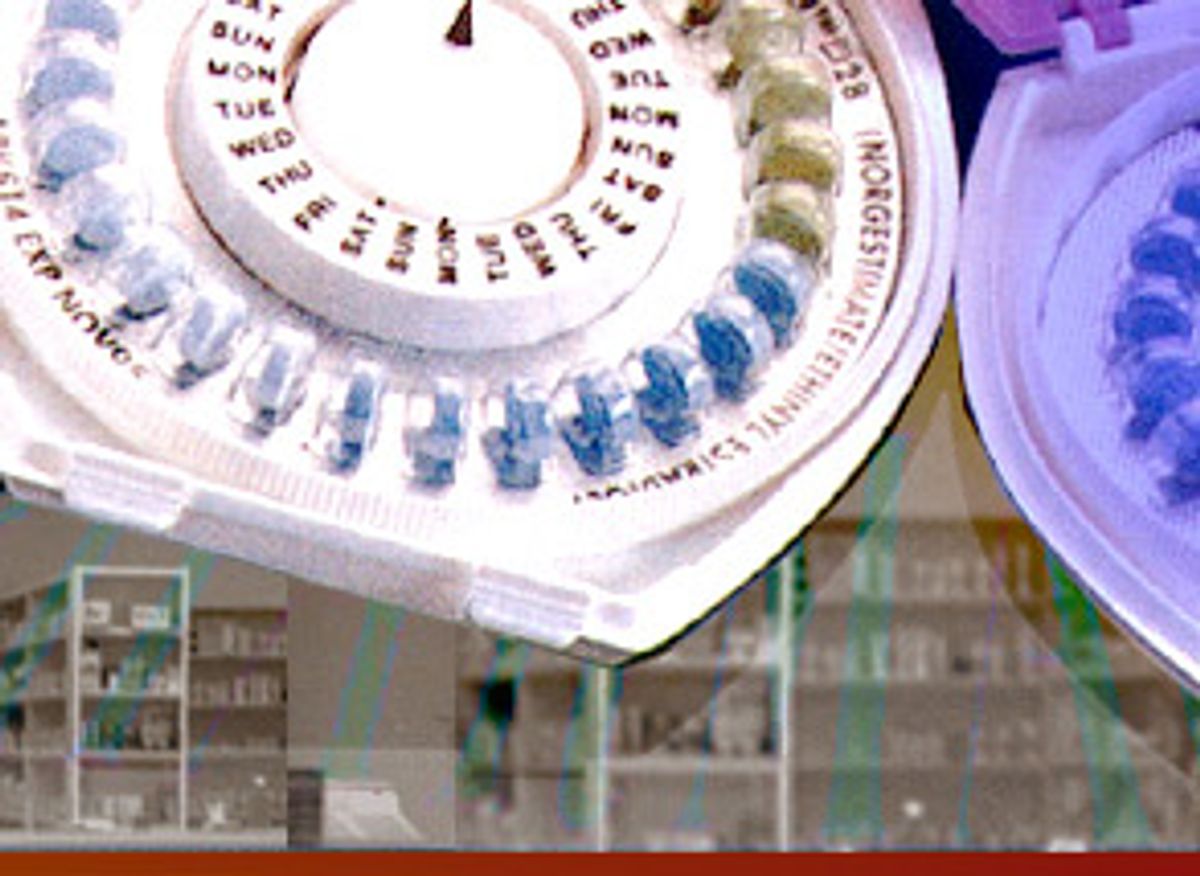 The two young women sitting in a Seattle bar one Saturday night are living, breathing examples of modern thinking regarding birth control. In their early to mid-20s, both live with boyfriends they may or may not marry, and both have taken oral contraceptives for years. One of them even took the "morning-after" pill when she was in college. They are savvy, intelligent professionals who are unquestionably pro-choice on the abortion issue.

Yet neither of them is particularly in favor of making birth control pills available without a doctor's prescription.

"The Pill doesn't affect everyone the same way," says one. "What if it made you sick? What if women didn't go in to get their Pap smears and annual checkups?"

The other nods. "When I took the morning-after pill, it was really, really harsh," she says. "I'm not sure I would have wanted to go through that alone."

Their opinions are reflective of the strange debate -- or nondebate -- surrounding the Food and Drug Administration's most recent open discussion about whether oral contraceptives, including the morning-after pill, should be available over the counter.

Birth control pills have been available in the U.S. for decades, but only by prescription. Emergency contraceptives -- large doses of the Pill that can prevent pregnancy if taken within 72 hours of conception -- became legally available more recently. In some parts of the country, like Washington and Oregon, pharmacists are trained and licensed to prescribe emergency contraceptives at the pharmacy, making them effectively an over-the-counter product.

The potential benefits of making the Pill available without a prescription are obvious, though untested: Such a move would increase access and thus reduce unwanted pregnancies, as well as eliminate the hassle of getting prescriptions refilled. While insurance carriers would probably stop covering contraceptives, an open market might force drug makers to lower prices.

"It would be an interesting experiment," muses Elizabeth Nyman-McHugh, a physician assistant who has worked in clinics serving low-income clientele and the director of health services at Evergreen State College in Olympia, Wash. "In general, the Pill is pretty safe and easy to take. My perspective comes from promoting population control, and anything we can do to reduce unwanted pregnancies is a good idea and is good for public health."

But in the face of the increasingly pervasive use of oral contraceptives, the debate seems to have swung away from the right to use them toward the safety of using them. At a series of public hearings held at the end of June, birth control was probably the least contentious item in a list of prescription drugs the FDA is exploring making over the counter, from anti-allergy drug Claritin to cholesterol-lowering medications. That's no easy feat for reproductive rights issues, which usually mobilize the pro-life and pro-choice movements into polemical stances.

"I was appalled, really appalled," says Judie Brown, president of the American Life League and the only national pro-life organization to testify against over-the-counter oral contraceptives at the FDA hearings. "I would have expected much more ... from the pro-life movement."

The biggest disappointment to Brown? That the National Right to Life Committee, the largest pro-life organization in the country, has backed away from the debate entirely.

"For us, the birth control pill is completely a nonissue," says Laura Echevarria, an NRLC spokeswoman. "We don't consider using birth control an abortion."

Not only have the major pro-life groups, aside from the ALL, largely stayed out of the fray, but the pro-choice groups that testified chose to champion the cause only of emergency contraception, ignoring the birth control pill question. Indeed, pro-choice heavy hitter Planned Parenthood has yet to weigh in with an argument at all -- and a spokeswoman for the group says not to expect one for a while.

"There is a difference between the two," says Elizabeth Arndorfer, senior staff attorney with the National Abortion and Reproductive Rights Action League, one the nation's most active pro-choice lobbying groups. "Or rather, they are used differently. Using emergency contraception is a one-time thing that many recent studies have shown to be effective. But there are contraindications for some women using the birth control pill long term. It may be better for a doctor to keep an eye on it."

While the FDA's consideration of over-the-counter status for most of the other drugs on the list stems from petitions submitted by drug manufacturers or health insurers, no major interests have demanded the same review of birth control pills or emergency contraception. "The FDA process is to wait for petitions from drug or insurance companies," says an FDA spokesperson. The federal agency might make a request for petitions if it perceived a proven health need or there was a public outcry, but without such interest, it's unlikely the issue of nonprescription birth control pills will go much further.

So how exactly did birth control pills get added to the list? It's "an issue that's been raised over the years, more likely in the form of discussions," says an FDA spokeswoman. "The FDA meets with many, many different groups all the time, so it has come up."

And what little back-and-forth there has been on the subject has focused solely on emergency contraception. NARAL and other pro-choice groups firmly support making the morning-after pill truly over the counter, though again in a reactive and not a proactive way. "We and other organizations saw the opportunity to promote the most recent research on emergency contraceptives, and so we jumped on it," said NARAL's Arndorfer of the public hearings. "We do feel it's an important issue."

The main opposition consists of ALL and the Roman Catholic Church, which views emergency contraception as akin to abortion. Representatives of the National Conference of Catholic Bishops, a major church lobbying group in Washington, didn't attend the FDA hearings, but it will probably file an opinion before the chance for public comment is closed at the end of August.

Although the Catholic Church has traditionally been viewed as a foe of birth control pills, the method of their dispensation -- whether over the counter or by prescription -- is an issue modern ecumenicals consider only on a "theological and philosophical" level, says NCCB spokeswoman Helen Alvari.

"That cat is long out of the bag," says Alvari with a laugh. "We try to tell people to think about what they are doing ... but there isn't the widespread movement to oppose the birth control pill ... It's legal, so we don't argue over it."

Whether pharmacy shelves will ever carry birth control pills next to aspirin is unclear. But if that does occur, the two young Seattle women will probably adjust to it as quickly as society adjusted to the idea of a birth control pill in the first place.