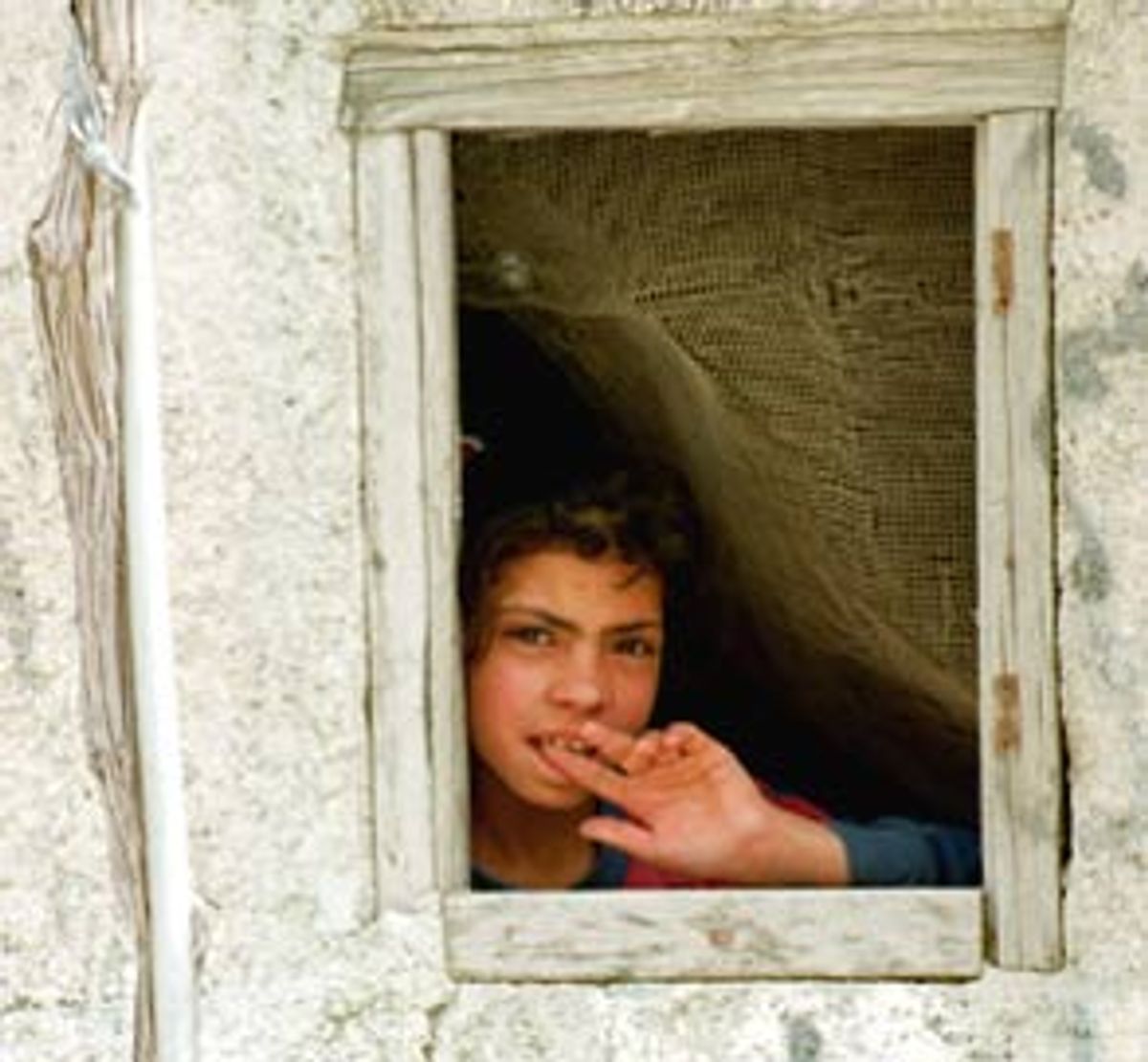 But mounted among the snapshots of charity projects are a series of stomach-churning photos. One is a close-up on the bloody, mangled flesh of victims of the 1994 Hebron massacre, when a Jewish settler gunned down 29 praying Muslims.

"They push me to work more," Odeh says of the gory pictures hanging across the room from his desk. He gestures to one particularly horrific shot of a man's head so mutilated that parts of his brain spill out: "That man sacrificed his life." The graphic photos, and the boost in motivation Odeh gleans from them, have less to do with charity than with politics.

That conflation highlights the difficulties surrounding U.S.-based Muslim and Arab humanitarian organizations working in contested areas like the West Bank and Gaza. Several, including the Holy Land Foundation for Relief and Development, which raises millions of dollars each year, have been under investigation by the U.S. government for links to terrorist groups, according to documents filed at Federal District Court in Washington. No charges have been filed against the group. But the investigation itself has spawned two unusual lawsuits.

The first accuses the Holy Land Foundation and five other organizations with ties to the Middle East of aiding Palestinian terrorists responsible for the slaying of an American teenager in the West Bank in 1996. The lawsuit, filed by the parents of David Boim, a 17-year-old yeshiva student in Israel at the time of his death, seeks more than $600 million in damages.

It charges the Holy Land Foundation and the other organizations with being "fronts" for Hamas, the Palestinian Islamist movement. The suit, which relies heavily on information gathered by the U.S. and Israeli governments, alleges the American-based groups raise and channel money through an elaborate global network to Hamas, which uses the funds to engage in terrorist activities.

The State Department lists Hamas as a foreign terrorist organization, and Israel holds the group responsible for a series of fatal attacks on civilians, including suicide bombings. In 1997, Israel closed the Holy Land Foundation office in East Jerusalem because of alleged ties to Hamas.

The Holy Land Foundation denies any association with Hamas or its representatives, and the group condemns any acts of terror. "If Hamas is killing, if there is any terror being done, we're against it," says Dalell Mohammed, a spokeswoman for the Holy Land Foundation. "We're in the business of saving and preserving life, not destroying life."

Which leads to the second suit. The Holy Land Foundation in April filed a libel suit against the Dallas Morning News, its corporate parent, Belo, and four reporters. The foundation accuses the paper of an "organized campaign" to defame it, citing a series of articles by metro reporter Steve McGonigle. Reporting from Gaza City and Jerusalem, McGonigle wrote about orphaned families supported by the foundation, including one whose father was a renowned Hamas military commander.

Complaints about the paper's coverage extend beyond the Holy Land Foundation. Many Dallas-area Muslims have been critical of the paper's take on their growing community. More vocal members held a series of protests at the Dallas Morning News headquarters through the spring, and a group calling itself "Muslims Against Defamation" set up a Web site to counter what they perceive as the paper's anti-Muslim bias.

After the lawsuit was filed, the paper ran a series of follow-up stories about the Holy Land Foundation's activities in the Palestinian territories.

"Those articles were fair but long overdue," says the Holy Land Foundations Mohammed. She contends the legal action led to more sensitive reporting from the paper and from McGonigle. "The only thing that prompted him was the lawsuit."

McGonigle says he can't comment about the Holy Land Foundation or his reporting on it because of the libel suit. But Dallas Morning News executive editor Gilbert Bailon dismisses the idea that the paper's coverage responded to the suit. "It didn't change the kind of coverage we did," Bailon says. The paper did hold a workshop with area Muslim leaders to educate its staff on Islam and aspects of the faith community, he says. The Dallas Morning News has no Muslim reporters.

Bailon says it's not uncommon for the Dallas Morning News to send metro reporters abroad to follow up on stories that began locally. He sent McGonigle to the Middle East so that the paper wouldn't have to rely so much on "third-hand" information in its reporting on the region.

As the U.S. looks into financial or logistical ties between the Holy Land Foundation and Hamas, the larger question concerns the near impossibility of isolating humanitarian aid from politics. The issue has come up in U.S. ties to other parts of the world as well. In the 1970s, the British government accused the New York organization Noraid of funding arms for the Irish Republican Army.

Established in 1989, the Holy Land Foundation generates funds in Arab and Muslim communities nationwide through mosques and cultural centers. Odeh coordinates the group's East Coast operations from his New Jersey office. The group's humanitarian efforts focus on the West Bank and Gaza, where it builds and funds hospitals and sponsors education programs. Currently, the group provides $55 monthly stipends to nearly 2,900 orphans and $100 to 360 families, according to Motaz Hindawi, director of social services. The money is distributed locally from offices in Hebron, Jenin and Gaza, he said.

The Holy Land Foundation has worked in other regions, as well, with projects in Chechnya, Turkey and the Balkans. Odeh recently delivered ambulances, flour and a bread-making system to Kosovo. A food bank at the organization's East Coast office in New Jersey feeds more than 100 families. The foundation also has a Chicago area office, as well as offices in Beirut, Lebanon, and Amman, Jordan. But it's the organization's Palestinian focus that draws criticism.

Most controversial is the organization's financial support to families of Hamas members who died during acts of terrorism. "Some of the orphans we are supporting are the children of Hamas martyrs," Odeh says. "But I have nothing to do with their fathers."

Supporting these families isn't a political act, according to Odeh, because the Holy Land Foundation has no knowledge of or involvement in the activities of Hamas. "The kid shouldn't pay for the father's mistake," he says.

But critics charge that politics and charity are conflated in such instances. Evan Hochburg of the Anti-Defamation League (ADL), a group that monitors anti-Semitism and terrorist activity, is one of many who believes that any humanitarian organization that provides financial support to a family whose breadwinner died while committing a terrorist act is promoting terrorism.

"If you're going to say to families of suicide bombers, 'He's a martyr,' someone who's killed innocent civilians, and give them a pension," Hochburg said, "that's giving an incentive. It rewards terrorism."

A Washington attorney for the parents of David Boim, Thomas B. Carr, agreed: "Anyone who gives money to a group who in any way, shape or form, in any of its facets, supports terrorism is responsible for that terrorism."

While the Holy Land Foundation supports families who are affiliated with Hamas, it doesn't support Hamas itself, Mohammed said. And the group doesn't screen aid applicants for background or political affiliation, she said. "We don't ask," she said of a family's political leanings," just like social welfare here doesn't ask."

The Holy Land Foundation's Palestinian focus or sympathy is not a valid basis for criticism, argues Hussein Ibish of the American-Arab Anti-Discrimination Committee, a Washington civil rights group. Such attacks are "based on a guilt-by-association model which does not focus on the specific criminal behavior of an individual but rather on their view and associations," Ibish said. "It is abhorrent to democratic processes."

Ibish believes that the U.S. has in effect criminalized humanitarian fundraising. "It is now illegal to express support for the lawful, humanitarian work of a group politically associated with so-called 'terrorist organizations' according to the State Department."

Despite its terrorist status, Palestinians and some Arab-Americans consider Hamas a legitimate political voice in the ongoing effort to establish a Palestinian state. And while the idea of Palestinian statehood may be abhorrent to some, it's certainly not illegal to support it, Ibish said. Banning political and humanitarian groups based on the principle of guilt by association "creates a category of political, thought and speech crime," he said. Ibish also believes it violates free and robust political discourse guaranteed by the First Amendment.

Odeh said the Holy Land Foundation has been targeted because Israel and American Jewish organizations, including the ADL, oppose any form of humanitarian aid to the Palestinians. Hochburg of the ADL calls that charge "ridiculous." Because the group is still under investigation by the State Department, the ADL hasn't taken a position on the Holy Land Foundation, he said.

Despite being under fire for its ideology, the foundation remains legitimate by U.S. nonprofit standards, and it continues to grow. In 1998, the organization raised more than $5 million, spending slightly more than it brought in, according to information filed on its IRS Form 990. It raised more than $6 million in 1999. The foundation far exceeds minimum standards established by the Better Business Bureau, with overhead and fundraising costs well below the 35 percent limit.

Odeh will keep responding to critics with the conviction that his organization does not exist to do harm. "They believe if I'm supporting an orphan, he will grow up and will be another fighter," Odeh said. "But how do you want me to fight back but to do good works?"