The Mayberry family has moved away from the V.P.'s farm, with a little help from the GOP, but they're still attracting attention -- and the police. 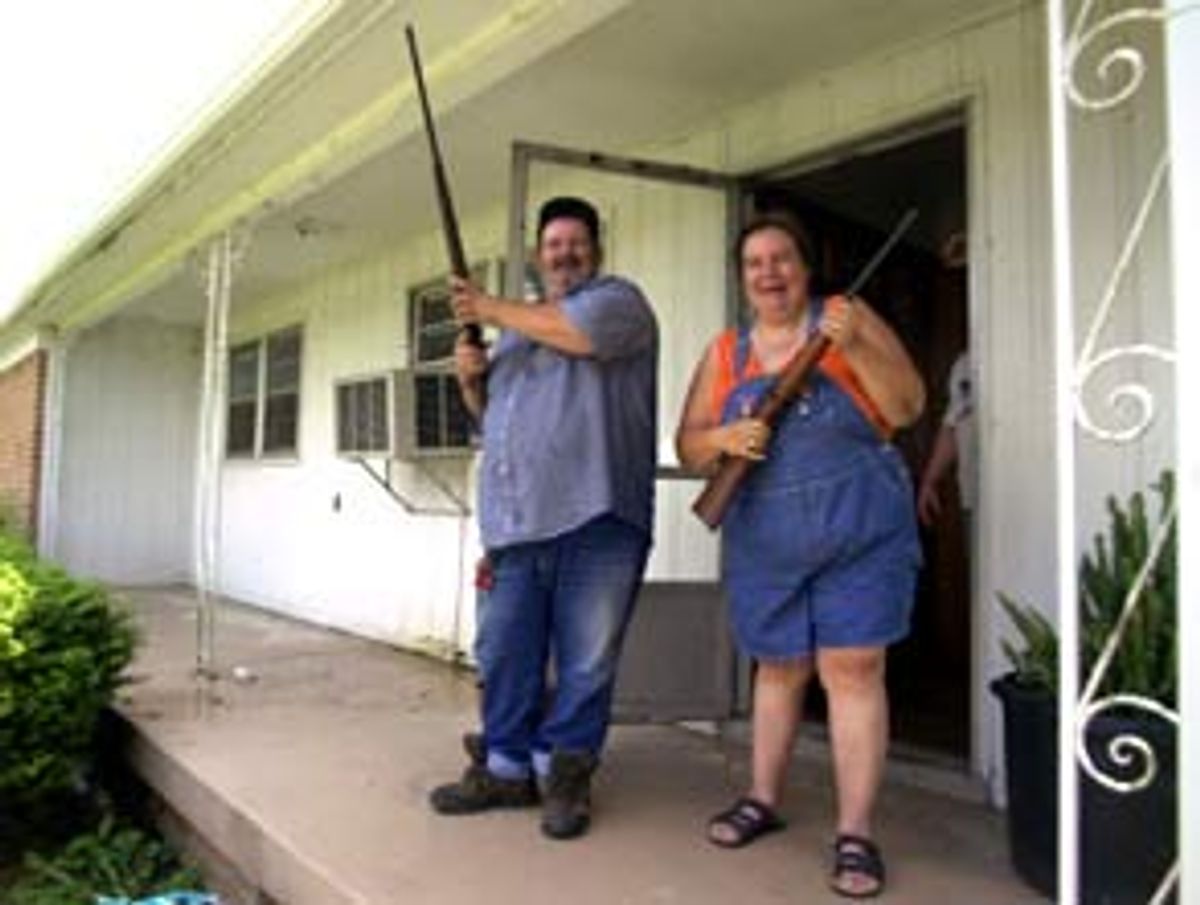 It didn't take long for the Mayberrys to make their presence known in their new home town of Lima, Ohio.

On Friday the family of Charles and Tracy Mayberry moved from its much-discussed dilapidated home on Vice President Al Gore's Carthage, Tenn., property to be with friends and family in Lima. Two days later, the Lima Police Department was called to the Mayberrys' new home at 656 Harrison Street to respond to a complaint about a domestic squabble.

"The officers were called out there for a fight on July 9 at roughly 12:20 in the afternoon," says Sgt. Patrick Coon of the Lima Police Department. "But there was no report filed. By the time the officers arrived at the scene, nothing was going on." Coon said he didn't know who, if anyone, was fighting.

The Mayberrys are the central players in an embarrassing political mini-chapter for Gore that was extensively detailed in the June 19 Weekly Standard by writer and sometime Salon contributor Matt Labash. After a media stink about Gore Realty's initial refusal to improve the plumbing and other accoutrements in their $425-a-month ramshackle home, Charles and Tracy Mayberry, with their five children in tow, moved from Tennessee to a new home near Charles Mayberry's adult children in Lima.

They were assisted by members of the Tennessee Republican Party, who -- out of the goodness of their hearts and a desire to further embarrass Gore -- volunteered time and about $1,000 in expenses to load up a moving truck and drive the family 450 miles north

Salon was unable to contact the Mayberrys who, according to local media, do not have a telephone. The police visit has already caught the attention of Lima's local NBC television affiliate, and, according to neighbors, the police have been out at least a few times already to visit the town's most famous new residents.

"They had a truck parked in the front yard and I did report that to the police because that's breaking the code," says a neighbor, who asked not to be identified. "But they have since been moved. There was a lot of barking dogs that day they moved in. But they are not a problem to me, at this point."

Joyce Avery, who lives down the street from the Mayberrys, says she's heard of only two complaints against the family since they moved in over the weekend

"I've not heard any big commotions," Avery says. "They've been fine as far as I'm concerned."

The Mayberrys set up shop in Lima over the weekend with the help from the Tennessee Republicans. "This is the Volunteer State, and we do help our own," said Tennessee GOP chairman John "Chip" Saltsman Jr. to the media during the move. "Apparently that is something Al Gore never learned growing up in Washington, D.C."

Those close to Gore insist that the vice president made a "good faith effort," in the words of one Gore ally, to rectify the problems. "All the repairs they requested were completed, plus a lot of additional work," says Gore spokesman Doug Hattaway. "I don't know what else could have been done."

The property managers repeatedly told members of the media that the damages were the Mayberrys' fault. And even a few weeks ago, Tracy wasn't exactly extending an olive branch to the vice president. "The way I consider it," Tracy Mayberry told Labash, "Gore can kiss my ass."

"I wouldn't say they're impeccable witnesses," says Labash, who has visited and spoken with the family a number of times. And they certainly have their difficulties. Charles is a second-grade dropout and Tracy, a chain-smoker, has been unemployed since a diabetic stroke. With other disabilities scattered throughout the brood the family lives on $1,536 in monthly Social Security payments.

Still, Labash says, "I absolutely believe them. I would expect them to have Springer-like bios. They're living in a shotgun shack in Carthage, Tenn. But she was nothing but forthcoming."

The Mayberry saga does show, depending on your point of view, either the incredibly bad luck or the unbelievable cluelessness of the Gore campaign.

Its importance is clearly debatable. Though it's tough to argue with Republicans who point out that the story would be a media fracas if there were similarly disgruntled tenants in Austin, Texas, arguing that Gov. George W. Bush was "no better than a slumlord," as Tracy Mayberry has said of Gore.

One reason for that might be that Gore as a policymaker devotes far more attention and federal funding to the plight of the poor than does Bush. The Texas Department of Housing under Bush is arguably one of the worst in the country. According to the Washington Post, "the number of poor, elderly and disabled Texans living in unaffordable or dilapidated housing is at a record high." Four hundred thousand Texans "live in decrepit, Third World-like housing in communities called colonias along the Mexican border; 334,000 lack adequate sewer services"; San Antonio and Houston rank as No. 1 and No. 2 among cities "with the highest percentage of poor renters living in substandard housing."

Of course, this argument could cut both ways. Does the fact that Gore professes to care about low-income housing while Bush appears to not give a fig hold the veep up to charges of hypocrisy? Of course.

"She's been trying to get her house fixed for about a year," says the Tennessee GOP's Saltsman. The property the Mayberrys had been renting needed a new kitchen floor, they complained. A toilet leaked; paint and wallpaper was coming from the wall; wiring needed to be replaced.

"But Gore's people wouldn't do anything, so she went to the media," Saltsman goes on. "I saw it on our local TV station, just like everyone else did. So I called and said, 'If there's anything we can do to help ...', but she said, 'Thanks, but I think he's going to fix it; he called me.'"

A couple of weeks later, Saltsman says, the Mayberrys were still complaining and repairs weren't being done. "So we called back and said we would be happy to put them up in a hotel room. She said she appreciated the offer, but Gore was going to do that. And they did, they put her up for a day or two, but they didn't fix anything ... As soon as the TV cameras went away, the repairmen went away."

Hattaway disputes this. The kitchen floor was ultimately replaced, he says. Hattaway e-mails an outline of all the repairs planned for or completed on the property: "350 feet of fill lines were installed for the septic system ... interior painting was completed, insect extermination was completed ... new gutters were installed ... an electrician examined the water heater, fuse box and all electrical plugs and wiring, and new load of stone was applied to a washed out area of the driveway."

But the Mayberrys still had issues with the property. According to media reports, one of the Mayberry daughters was bitten by a spider inside the property; Labash says Tracy told him that the daughter's leg turned purple and she had to be rushed to the emergency room. Additionally, Tracy complained to Labash that one of the toilets still leaked, sparks shot out of one of the outlets and the painting that was "completed" was done so rather shabbily.

And, according to a report Tuesday in the Toledo Blade, "The last straw, [Tracy] said, came when they recently found their dog sick by the roadside after munching on a dead turkey laced with poison, and their cat stretched out in a field behind their house with its throat slit."

Mayberry finally took Saltsman up on his offer.

So Saltsman and six other Tennessee Republican Party officials put on orange shirts and loaded up the moving truck last Friday. With Saltsman staying behind, the other six made the eight-hour drive to Lima and helped the family unload the truck.

Cracked Hattaway: "It was the first time the Republican Party's shown any concern for a working family."

"The vice president started it and we're just here to finish it," says Saltsman. "He's the one who called and said, 'I'm going to fix the things, and by the way I'm going to be in town, lets go to dinner.' It's just one of long line of things that serve as an example of the vice president not telling the truth."

But Hattaway, who heard Gore's end of that conversation, says that what Gore had actually said to Tracy Mayberry was that "he'd like the have her and her husband up to the house next time he was in Carthage." But, Hattaway says, the first time he was back in the area was over the past weekend -- after the Mayberrys had left for Lima.

Saltsman and the Tennessee Republican Party "obviously didn't care about the family, they were just making hay about the situation," says Hattaway. "If they were concerned over people's living conditions, they'd ask why George Bush has never even visited one of the colonias in Texas, where thousands of families live in Third World conditions."

"It's predictable that the Republicans would seize any opportunity to distract attention from the real issues in the campaign," Hattaway says. Of course it is: It's a political campaign. Shouldn't the Gore campaign have been able to settle the Mayberry fracas?

"I'm telling you, every effort was made to address the family's complaints," Hattaway insists. "I'll leave it for others to judge why they continue to make hay."