Turned on with a tickle

For fetishists, feathers on the feet are no laughing matter. 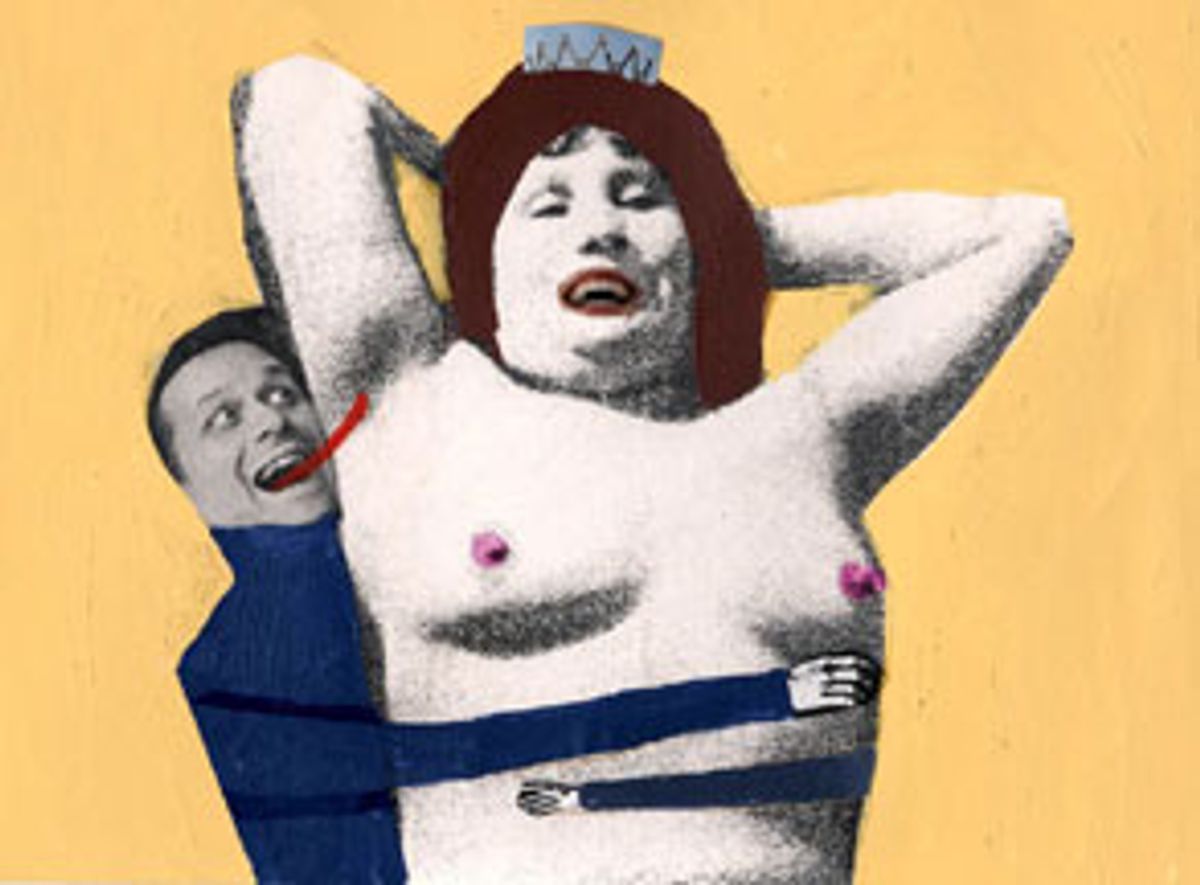 The heaviest instruments of torture aren't whips, they're Q-tips.

Or so swears a host of self-proclaimed "tickle fiends." They gather for parties or one-on-one for the purpose of exploring consensual bondage and "vellication." (It's not a real fetish without a fancy Latin-derived name, in this case from the Latin "vellicatus" -- to twitch or pinch.) While their kink may seem laughable -- or scary -- to outsiders, to the hardcore faithful it's most intense kind of play.

Tickling involves an immediate loss of control. If someone rakes his or her fingers over my feet in just the right way, I go into convulsions that could take an hour of whipping and clamps to elicit. Some "tickle-tops" intensify this sense of bodily anarchy by trying to make the "tickle-bottom" lose control over ejaculation, urination or consciousness itself.

Tickling may be an underground fetish, but it's surprisingly common. Yahoo's adult tickling area has 62 clubs, the largest of which has more than 1,500 members. People of all sexual orientations host regular tickling parties all over the country, and "Ticklefest 2000" is due to be held in Dallas Sept. 21-24, featuring the world's first Tickle Rodeo.

But despite the massive numbers of fanatics, the tickling community complains of feeling marginalized or stigmatized within the larger "kink" community. I've often told 20-year veterans of perversion about my interest, only to see a mixture of amusement and revulsion appear on their faces.

One "leather daddy" I know tells of meeting a leatherman who boasted he could take anything the daddy dished out -- until the daddy mentioned tickling. The bottom blanched and made a swift exit.

One reason for the invisibility of tickling may be its separateness. Tickling devotees often don't mix with the rest of the fetish community, nor are they out to their "vanilla" friends. Instead, they gather in their own spaces.

Straight ticklers can buy a bevy of magazines and videos mostly depicting women tickling each other. Gays have tons of message boards, where guys can find other guys into tickling, or speculate about whether David Duchovny's feet might be ticklish. The most popular of these is Jack's Tickling Rack. (The most popular straight tickling site, www.tickletown.com, has been down for a while.)

But it's hard to imagine tickling achieving the same "cool" status in popular culture that has been achieved by the fetish, B&D and S/M world. Regular kinksters see themselves in Madonna or the Genitorturers. Tickle fans tend to find their truest reflection in old Warner Bros. cartoons.

It's easy to see why tickling might seem childish. Most enthusiasts date their interest from early on. When I was a kid, a camp counselor whose name I forgot held me down and tickled me, and I felt an unfamiliar bliss. Part helplessness, part overstimulation, it was all surrender. Later on, guy friends would hold me down and tickle me for hours while I mock protested.

Dave tells of tickling a babysitter when he was 3 or 4. By kindergarten, he was obsessed with tickling. Max says he used to draw fingers sneaking up under the arms of the women in his coloring books.

Alan Pratt, who organizes gay tickling parties in New York, remembers having wet dreams about tickling other boys' feet in seventh grade. He found excuses to go to work on his friends in high school, without letting them know how turned on he was. But it wasn't until years later that Pratt allowed another guy to tie him up.

"I talked to this guy on the telephone on and off for a year before he convinced me to meet him in person," Pratt recalls. Pratt told friends where he would be and went to the man's house. "This man took me into a room in his home that was specially set up for tickling: a four-poster bed with restraints, a table with his box of tickling implements and a chair."

Tied and blindfolded, Pratt felt the man go to work. "He knew when to use a light touch, and when to really dig in. Using fingers, feathers, brushes, ice cubes and other toys, he worked my body from ears to toes. Because of the blindfold, I never knew where he would attack next, which heightened my sensitivity," Pratt says.

Pratt says he laughed more in that hour and a half "than ever before in my life." Meanwhile, the tickle-top kept him close to orgasm. At last, the tormenter "removed my blindfold, dangled his bare foot in my face, wiggled his toes and told me how ticklish his feet were." Then he stroked Pratt until he "exploded." Pratt was too exhausted to turn the tables on his torturer as they'd planned.

I put a personal ad on a male-male tickling site once and received dozens of e-mails from eager tickle-tops, some of them hundreds of miles away. Some of them were very serious, some of them more comic. One jolly "uncle" wrote long e-mails about his plans to drive his helpless "nephew" to distraction.

Michael in Columbia, S.C., says he doesn't even bother with bondage, thanks to his size. "It's kind of odd to have a 6-foot-2, 250-pound black man tickling you," he says. "Once I seize you, that's it. I don't have to tie you down." He gets a thrill out of sitting on guys and watching them wear themselves out struggling.

In general, gay tickle buffs seem to have an easier time finding partners than their straight counterparts. Straight guys say they've searched fruitlessly for years for a woman who would do more than just tolerate their interest as a form of flirtation. Going to parties, which often have a skewed male-female ratio, can be the only way to connect with someone.

One straight guy says he used to have only vanilla sex with women. To keep his excitement going, he would fantasize the entire time that he was tickling them instead. He'd be thrilled when he could incorporate tickling into foreplay.

Max was lucky enough to find a woman who had never heard of sexual tickling, but was open to learning about it. Now "she's as obsessed about tickling as I am."

Women who like to tickle men also complain that willing subjects can be hard to find, at least within the straight tickling community. Most guys who show up at male-female parties aren't interested in being on the receiving end. As a male tickle-bottom, I was told I'd be very popular at straight tickle parties.

One way that parties try to make people feel comfortable showing up is by limiting the sexual aspects of the experience. Dave's get-togethers have strict rules against nudity below the waist or any sexual touching, which Dave says he derived from some fetish play party rules he saw years ago. Male-male tickling sites and parties often make a point of welcoming straight men who merely enjoy a good laugh.

In fact, some fans insist tickling isn't a sexual thrill at all. When I lived in the Southeast, I had a long correspondence with a Southern artist who posted drawings of hunky guys being tickled, mostly nearly naked, on the Internet. But the artist expressed shock at any suggestion that tickling might be about sex. I started receiving long e-mails daily, containing quotations from St. Paul's Epistles interspersed with steamy passages about how much Eric wanted to tickle me.

Whether tickling is sexual may depend on context, according to hardcore devotees. Max says he can tickle his kids or co-workers without being turned on, but he enjoys incorporating tickling into "foreplay, during play and even after play." Another tickle fan compares tickling to dancing: potentially sexual but often just playful.

Judging from the personal ads at Ropejock.com and other sites, an overwhelming number of gay ticklers want to incorporate sexual touching along with the use of toothbrushes and combs. A common fetish for gay ticklers is orgasm control, in which the subject is kept on the edge of ejaculation for long periods. Gay ticklers also enjoy "milking," in which the tickle-bottom is forced to ejaculate repeatedly. Sometimes ticklers use the two techniques together.

I did receive an invitation to a gay "Spanish Inquisition" party in San Francisco, in which hooded brethren promised to put me in stocks and force me to confess to heterodoxy. An evening of "heretickling" sounded fun -- until I found out the "monks" didn't believe in using safe words, and part of their goal would be to make me pass out repeatedly. I passed on the invite.

Other parties seem tamer and more established. Dave runs monthly parties in the San Jose, Calif., area, mostly involving straight people and including anywhere from eight to 17 people. Max has regular East Coast gatherings that get up to 50 people, according to attendees. A Midwest bash gets similar numbers, according to Dave.

Though Michael is "notoriously known for tickling people" in South Carolina, he's had a hard time getting local parties going. "I don't know how big the scene is here in the heart of the Bible Belt." He's seeking advice from friends who organized successful parties in North Carolina and Georgia, including one Atlanta party that drew more than 100 men.

By any measure, Pratt's New York "Foot Friends" parties are insanely successful. The parties started as small monthly events in the late 1980s. Pratt and friends have built them to the point where they happen every Monday and the second Saturday of every month, and average attendance is around 125 men.

Not only that, but the Foot Friends' annual "Foot Ball" drew 215 men last December. The group now has a Web site, a free informational phone number called "The Footline" and regular classes in subjects such as "foot etiquette," reflexology and extreme tickling. Theme nights include sandals and socks, but the monthly "Big Tickle Night" is the most popular.

Despite the surging crowds, Pratt feels evangelical about increasing the numbers of men who feel comfortable expressing their fetish. "There are a hundred times as many guys out there who are into it than are showing up at the parties," he claims. "My mission is to do whatever it takes to bring these guys 'out of the shoe box.'"

Charles Anders is news editor at www.anythingthatmoves.com. He is writing a book on cross-dressing.