Inmates with e-mail? It could happen at some state prisons experimenting with technology behind bars. 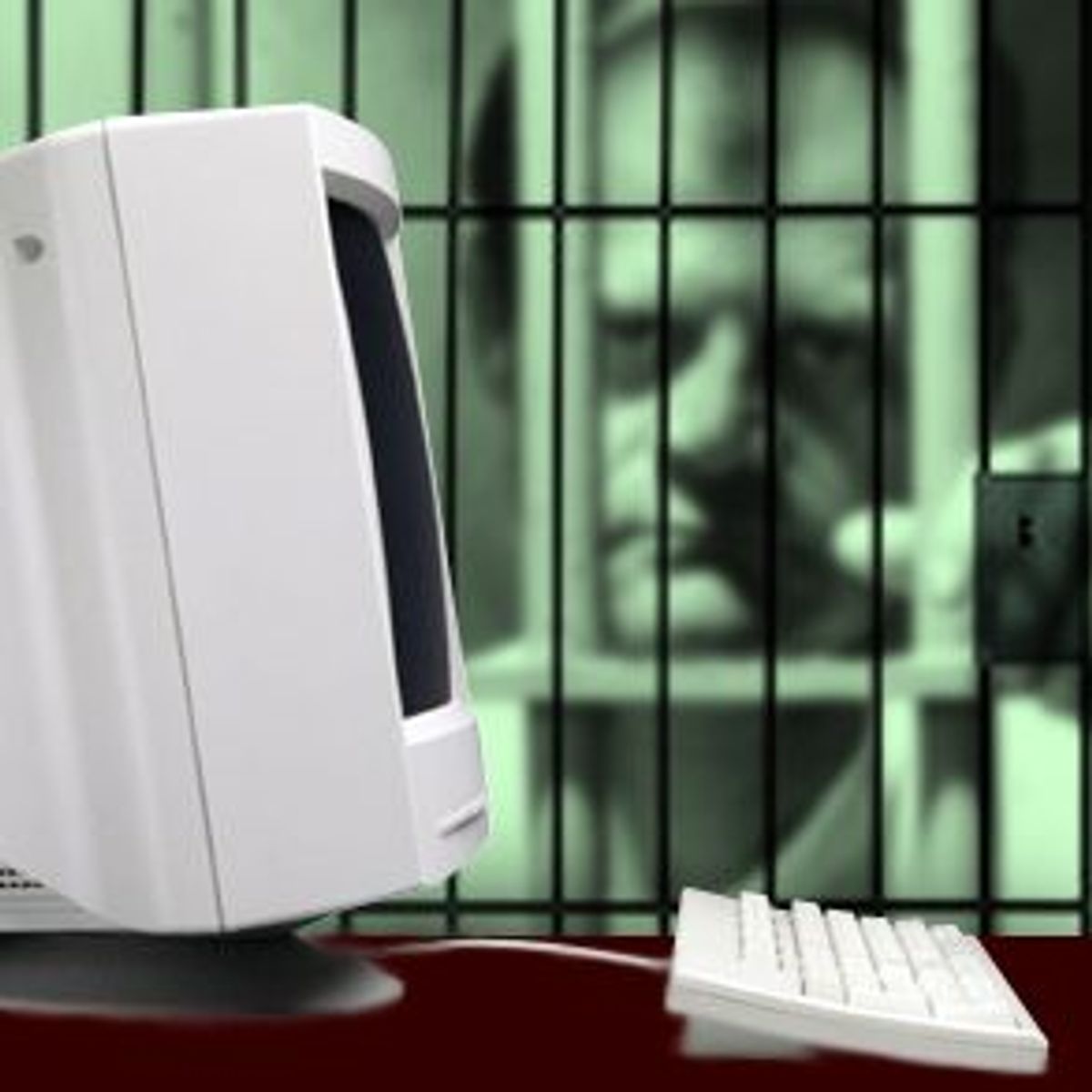 Scott Spangler was used to spending most of his time in a cell at San Quentin State Prison, but the day we met he was sitting at one of the two computers available to the nearly 2,000 inmates at California's oldest penitentiary. Even without seeing what his wiry fingers were working on, officials knew he wasn't downloading something illicit from the Web: the PCs for San Quentin's inmates are configured to only allow word processing and research on a few encyclopedia CD-ROMs.

That the inmates have any computer access reveals San Quentin to be a pretty enlightened place. For while the tech sector and the U.S. prison population have both experienced phenomenal growth -- 1.8 million people are now behind bars in this country -- few correctional facilities encourage the two to come together.

"I've been a computer engineer for 11 years," said Spangler, who was serving a nine-month sentence for drunken driving -- his fourth DUI conviction. Soon, he would be out and looking for a job. He'd hoped that San Quentin would give him more of a technological hand. "I'd like to use e-mail, the Internet. I at least hoped they would have computer magazines -- PC World, Wired, stuff like that -- so I could keep up." His eyes focused on a wooden magazine rack beside the steel-barred window; old sports magazines fill most of the shelves. "But there's nothing," he said.

As technology becomes a more integral part of everyone's life for work, recreation and education, there is legitimate concern that computer-deprived prisoners returning to the world outside will find themselves hopelessly behind the curve. It's obviously a challenge to offer access to technology that doesn't provide inmates with too much freedom of communication. But some prison officials are hip to the notion that technology can bring otherwise unaffordable educational opportunities to prisoners and are cautiously experimenting with ways to remove the barriers to computers and online classes.

Juvenile inmates in Texas are already taking classes online and soon adults in Ohio, Maine and Maryland will be invited to participate in distance learning via computer. If these programs prove secure, others will follow. By 2002, some prison officials and tech company executives expect convicts will be surfing the Web to start job searches before their release, exchanging e-mail with teachers of online courses, even sharing virtual classroom space with non-incarcerated students.

"Prison is the last frontier, the one place in America that technology just hasn't reached," says Alice Tracy, assistant executive director for the Correctional Education Association, a nationwide association of prison educators. "But that's going to change. There's already a lot of talk about it [in prisons all over the country] and with very careful steps toward Internet security, it's going to happen."

Many corrections officials consider this a dangerous move. "The risks outweigh the benefits," says Phil Sibal, deputy assistant director for Federal Prison Industries, the arm of the Federal Bureau of Prisons that puts federal inmates to work. "There's never been a move to give prisoners access to the Internet and that's because it would allow them to conduct outside business and have access to things that we don't want them to access, like information on how to build weapons."

But in a nation that's slashed budgets for inmate rehabilitation, education and activities even as the inmate population soars, prison activists, educators and a handful of technologists consider these programs to be the best way to change prisoners' lives, to improve their chances of becoming good citizens and living a crime-free life when they're released.

The most ambitious online education prison program in the country could be one under development in Maryland. Whereas other states aim to offer high school courses or vocational training to juveniles or prisoners serving short sentences -- two years or less in Ohio, for example, Maryland plans to offer college courses to some of its more dangerous inmates: the murderers, thieves and sex offenders at the Patuxent Institution, a maximum security prison that focuses on treatment and rehabilitation. (At the end of this month, the U.S. Department of Education will tell the state whether it will receive a federal grant for the program; if not, Maryland officials are determined to find the funding elsewhere.)

In theory, the educational opportunities will be available to any inmate, regardless of the crime they committed or the length of their sentence. "There will be some sort of screening, to make sure that they have the academic and developmental skills, but that's about it," says John Linton, director Maryland's Correctional Education Department, which will administer the program.

Technologically, though, these inmate-students will be locked down. Linton and Patuxent have teamed with Mitretek, a nonprofit former defense contractor that promises to wall in the prison's network.

First-year students, 20 of them, will only be given the chance to enroll in one of five introductory college courses covering subjects like math and sociology, and they won't even have what we consider an Internet connection. Rather Mitretek will create two separate, closed loops by which prisoners can communicate with educators.

The Virginia company will download course work to a server from the prison's educational partner, a local community college, then cut off the connection to the Internet. The prisoners will then connect to this server and access the already-downloaded content. Bulletin boards and e-mail correspondence will be available, but in delayed form. Inmates can write messages, but they will be screened by a prison official before being sent to Mitretek's server. Later, after that server's connection to the prison is broken, teachers will be able to log on, read and respond.

In other words, the network won't so much resemble the rambling, information-free-for-all that is the Internet as a canal lock system that shuttles specific messages through in a very controlled manner.

"Nothing will happen in real time," says Linda Stone, the Mitretek vice president in charge of the project. "There's a system administrator controlling the down and the up." What they miss, software will catch, she says. A network assessment program will scan the network several times a month to verify that no real-time, unmonitored communication takes place.

This "save and forward" system would be almost impossible to circumvent, say security experts such as Karen Worstell, vice president of information security at AtomicTangerine, the company handling security for Interpol, the worldwide intelligence organization. Already, sites like Inmate.com and Dead Man Talkin', which build prisoners' Web pages and accept e-mail on their behalf, have been working under similar principles. They allow no direct Internet access and print out all e-mail, so that it can be sent to prisoners like regular mail, which is screened by corrections officers.

But the closed-loop model only represents the first phase. Later on, once the security is proven, some prisons plan to open the access flow from a trickle to a steady stream that more closely resembles the outside world's experience with the Net. Ohio, for example, hopes to eventually let prisoners (but not sex offenders and those who used computers in the commission of a crime; they're prohibited from accessing the Net by a 1999 law) look online for jobs.

"We want to make sure they get connected to the real world of employment," says Allan Toops, director of academic and instructional services for the Ohio Central School System within the state's Department of Rehabilitation and Correction. "That's where the power really comes. We can dummy up education, but we need to get them connected to work so that they move away from prison."

Linton's plan in Maryland wouldn't go quite this far. But it would allow prisoners, by perhaps as early as the fall of 2002, to share classes with students outside the prison's walls, posting to class discussion bulletin boards and e-mailing fellow students and teachers. E-mail filters would make sure that outside e-mail doesn't get in and that prisoners aren't able to e-mail out or surf the Web, Stone says.

Further security will be ensured by using a different coding protocol: instead of the standard simple mail transfer protocol or SMTP, which is what most e-mail programs use, the connection Mitretek is building between the Patuxtent prison and the Maryland community colleges will use proprietary technology. If a prisoner tries to send mail to anyone not on the class list, the message will bounce back.

Mitretek plans to make this technology available free to prison systems in other states, in the hopes of spurring a national trend. And it's likely to find some grateful takers.

Already, prisons in Maine and Ohio are setting up closed-loop systems through Novanet Learning Inc., a for-profit education company in Tucson, Ariz. And nine Texas prisons housing juveniles have already employed Novanet to build a wide-area educational network of its own, using principles like the save-and-forward system and proprietary e-mail protocols.

Since Novanet set up the system about two years ago, no one has succeeded in breaching it, says Terry Whaling, instructional supervisor for the Texas Youth Commission. In fact, of the 500 teenagers who have used the network, only one has attempted to use the system in some unauthorized way. And in that case, Whaling isn't even sure what the student-inmate was trying to do.

"Our network noticed some activity that looked alarming -- a machine was on at a time of the day when it wasn't supposed to be on," Whaling says. "So we checked on it and found out that the machine had been used by a student. We tracked him down and took away his privileges."

If this seems harsh, it is. Whaling stresses that corrections officials are justifiably nervous about the Net's possibilities. He says he's confident that the system is secure, but not necessarily because of the technology.

"It's always the people that matter," he says. "The teachers have to be extra vigilant and problems will occur when they're not. The reason our system is safe is because we're all over the thing like a cheap suit."

Worstell agrees: "There is always some technique that we didn't think of. Networks are intended to enable information sharing so there's going to be creative ways to circumvent everything. It's just a matter of if and when they want to." Even the proprietary languages, she says, could potentially be hacked, allowing anyone who learned how the system works to alter it or communicate with the prisoners who are using it.

This is exactly what corrections officers at places like San Quentin fear and why inmates like Spangler (who finished his sentence since I visited him in prison and has been released) are cut off from the Net. "It's a security issue," says Vernell Crittendon, San Quentin's public information officer, who notes that not even he has Net access from his prison office. The chance that a prisoner might get information on how to escape or send information on how to commit a crime is just too high, he says. But Mitretek and Novanet stress that only a fraction of the attempts, if any, would succeed. And even with the risks inherent to networked education, educators say the benefits must be sought out.

"There are some very legitimate reasons why people want to bring technological solutions," says Tracy at the Correctional Education Association. Chief among them: scale and personalization. "Because online education lets inmates individualize the course work -- letting them take courses that they're interested in," rather than being stuck with whatever handful of courses might be offered by live teachers in a prison. "There will be the chance to educate more students and they'll motivate themselves, taking it even further than they do now."

It's not that public safety isn't important, she says. It's just that with such a huge number of people in prison, society shouldn't focus only on locking them up; the inmates need exposure to technology and education if they're ever going to succeed in the world beyond the bars.