Director Bryan Singer ("The Usual Suspects") returns with a moody, formula-defying vision of the biggest-selling comic-book series ever. 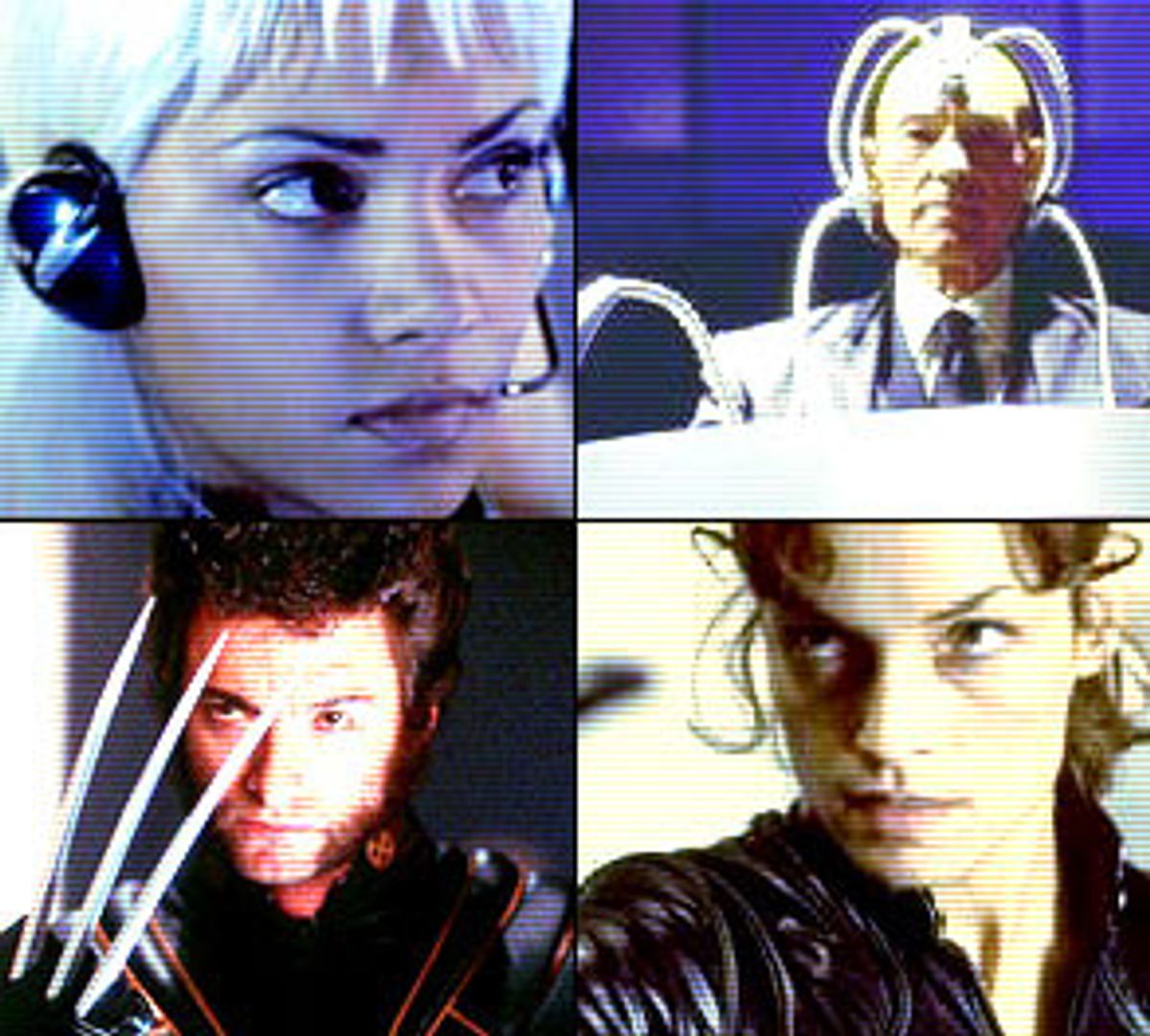 For a comic-book adventure expected to be one of the summer's biggest movies, "X-Men" is a rather moody affair. Most summer blockbusters open with a slam-bang action sequence, but this one begins in 1944 at a concentration camp in Nazi-occupied Poland, establishing a somber tone that hangs over the rest of the picture like mist. With supreme confidence (or perhaps hubris), director Bryan Singer and his team of writers have also made "X-Men" the opening chapter in a saga; its plot structure is closer to that of a TV-series pilot episode than a film epic meant to stand on its own. Despite these peculiarities -- or maybe because of them -- "X-Men" is a distinctively absorbing entertainment, offering just enough popcorn thrills for mass audiences and just enough chewiness for hardcore sci-fi fans.

Singer, who made his reputation with "The Usual Suspects," one of the most original thrillers of the '90s, was an adventurous choice for this zillion-dollar screen adaptation of the plot-dense Marvel Comics series about mutant warfare in a near-future society. But his willingness to defy formula and convention (at least up to a point) is just what the doctor ordered. "X-Men" is about the future, all right, but its future is a troubled one that has ominous echoes of its past: the Holocaust, the Red scare, the Ku Klux Klan and the neighborhood gay-basher.

So the darkness Singer conjures up here is not the stylized Gothic gloom of Tim Burton's "Batman," so often imitated in the past decade, but the shadow of modern history's darkest times. Maybe "X-Men" doesn't quite have the formal daring, breadth of vision or daredevil wit of "The Matrix," but it shares something of that film's allegorical spirit, creates its own sense of gravity and takes certain chances with audience expectations.

In the leading role of Wolverine, a hirsute renegade mutant with a tendency to sprout Freddy Krueger-like steel claws, Singer has cast nearly unknown Australian actor Hugh Jackman. With his striking resemblance to the Man With No Name-era Clint Eastwood, Jackman proves a likable, laconic star, but in a sense he's getting a free ride. This fantasy aimed at American teenagers is largely carried by a conflict between two characters past middle age, played by arguably the two greatest living actors of the English stage (even if one of them is best known for commanding the Starship Enterprise).

As longtime fans of the "X-Men" universe know, Professor Charles Xavier (Patrick Stewart), a telepath and psychic, has gathered many of the world's most powerful mutants around him, both for their own protection and to do good for humanity. But his old friend Erik Magnus Lehnsherr, better known as Magneto (Ian McKellen) for his power over metal, is a Holocaust survivor who has had quite enough of the human race and its bigotry. He sees a war coming between humans and mutants, and aims to be on the winning side.

Wisely, Singer and credited screenwriter David Hayter (one of seven or eight writers who reportedly worked on the film) don't burden us with too much of this right at the start. As in a noir thriller, the film proceeds with disparate elements that don't at first appear to describe a plot. After a grim glimpse of Magneto's World War II childhood, we leap forward to meet Rogue (Anna Paquin, once the young girl in "The Piano"), a lonely Mississippi teenager who has discovered that her touch can kill people. Then we see Sen. Robert Kelly (Bruce Davison) agitating for a "Mutant Registration Bill" at a congressional hearing and producing a McCarthy-style list of "known mutants" living in the United States. A brief and oblique encounter between Xavier and Magneto leads us to remote northern Alberta, Canada, where runaway Rogue encounters Wolverine, an amnesiac loner who is using his regenerative powers to make a living as a bare-knuckle bar brawler.

As they begin to forge an uneasy alliance, Rogue and Wolverine are attacked by one group of unknown mutants, rescued by another and find themselves transported to Xavier's headquarters in the New York suburbs, where "X-Men" begins to settle into a more familiar pattern. Ultimately the movie offers plenty of action scenes, but it works at least as much through tension and anxiety. Singer seems to understand that there's no point in trying to out-Woo the operatic action blockbusters of recent years. It's high time somebody in Hollywood figured out that less is often more; brief effects scenes involving Xavier's use of a telepathic amplifier called Cerebro and Wolverine's ride on a superpowered X-Men motorcycle are exhilarating precisely for their brevity.

At one point, the wheelchair-bound professor explains to his guest that Magneto hopes to conquer humanity; Xavier's mutant militia of X-Men -- Storm (Halle Berry), Dr. Jean Grey (Famke Janssen) and Cyclops (James Marsden) -- are fighting to stop him. Wolverine growls, "This is the stupidest thing I ever heard." It's a dangerous admission, especially if you start thinking about the plot of "X-Men" too hard. As my companion observed, if superpowered mutants actually emerged today, they'd become overnight celebrities, not outcasts. (If Shaquille O'Neal and Pamela Anderson, for instance, are not technically mutants, that's mostly a matter of semantics.)

Humanity's protectors are not necessarily happy campers, and "X-Men" stays true to its comic-book roots by supplying a few threads of soap-opera subplot. Wolverine and the prissy Cyclops, who has death-ray vision, keep jostling for the attention of Dr. Grey, the elegant telepath. Rogue (now wearing gloves to avoid accidental homicide) settles into the professor's high school for young mutants, but keeps casting longing glances Wolverine's way. Storm, the weather shaper with a platinum do and milky eyeballs, stands around with almost nothing to do. Magneto's collection of evil mutants almost steals the show, notably the caveman/bear cat called Sabretooth (Tyler Mane) and the loathsome Toad (Ray Park) with his prehensile tongue. As Magneto's shape-shifting, butt-kicking lieutenant Mystique, supermodel Rebecca Romijn-Stamos displays her attributes in an electric-blue bodysuit that should fuel many teenage fantasies long past Labor Day.

Magneto's grand scheme is really no better than that devised by a second-rate Bond villain: World leaders are gathering on Ellis Island to discuss the mutant problem, and he has a huge electrical gizmo that will turn them into mutants, too. But Magneto does create some boffo action scenes as he rips a railroad car apart in search of Rogue (whom he needs to fulfill his sinister plan) and defeats an enormous squad of cops with an exasperated wave. "You Homo sapiens and your guns!" McKellen sighs, drawing out the phrase with ambiguous intent. The final fight scene within and atop the Statue of Liberty, faintly echoing the ending of Hitchcock's "Saboteur," is vigorously staged and should rouse anybody who drifts off amid all the plotlines.

By leaving several major plot points up in the air for the next installment -- in fact, nearly all of them -- the filmmakers are leaving themselves open to possible ridicule. If "X-Men" flops, will anybody care about Magneto's fate or the mystery of Wolverine's origins two or three summers from now? (Personally, I'm more interested in whether Rogue's new Susan Sontag hairdo can get Wolverine's attention, and in the suggestively intimate relationship between Cyclops and Professor X.) That shouldn't be a problem; the surprising complexity of the characterization in "X-Men," along with Singer's ambitious, ambiguous tone, ought to ensure the series an enduring fan base. Still, if this is the new century's first action-movie franchise, it's an oddly subdued and downcast one: futurism with its eyes fixed on the rearview mirror.