Does the DVD-decrypting DeCSS do for video what Napster did for music, and can copyright law stop it? 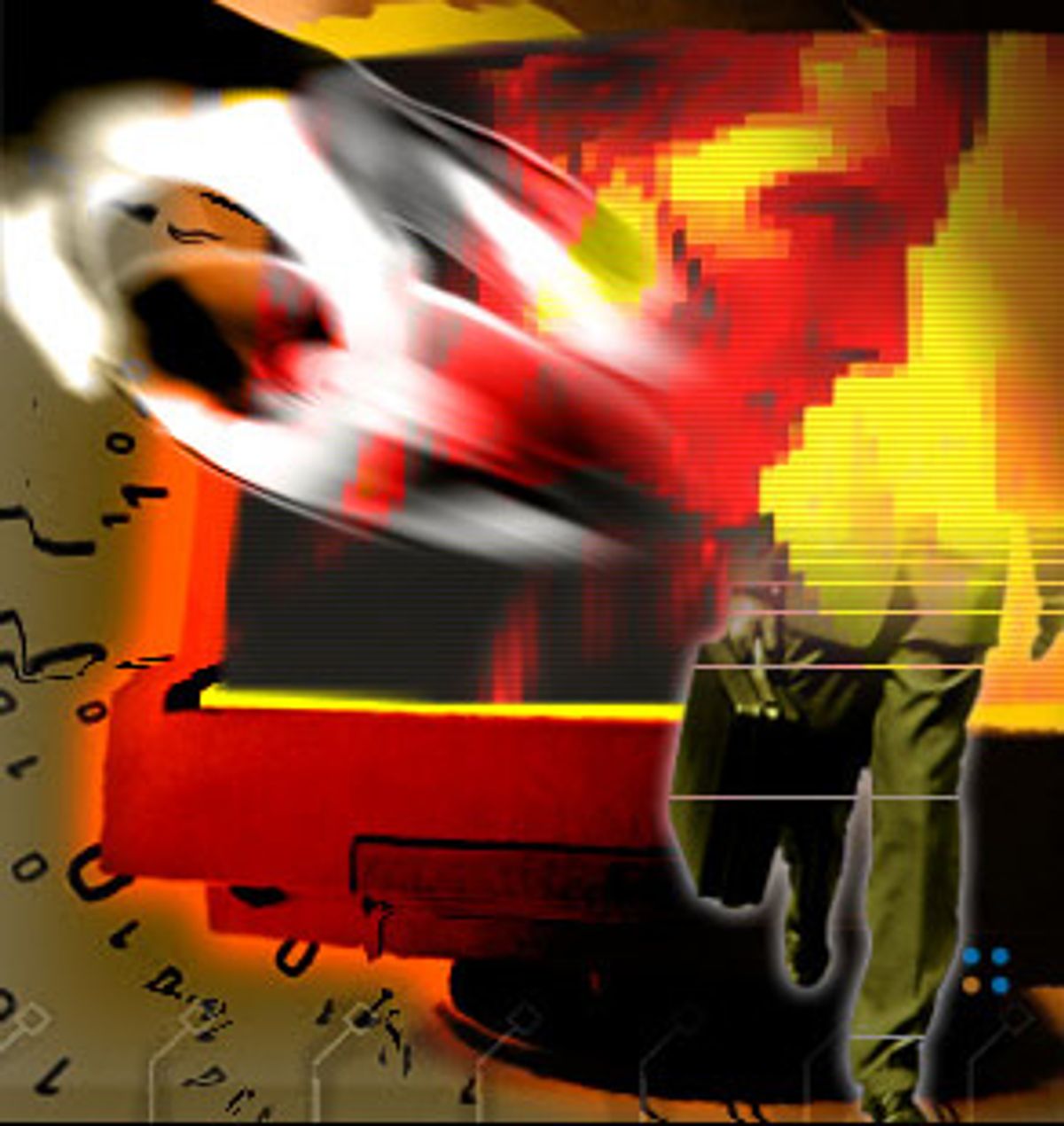 Eric Corley, better known to his friends as Emmanuel or "Manny" Goldstein, tends to keep his hands in his pockets and his eyes aimed at the floor. The editor of 2600, the hacker quarterly, may be the latest hacker icon -- he is, after all, on trial here this week, sued by eight movie studios for distributing DeCSS, a program that decrypts DVDs so people can play them on Linux-based operating systems -- but outside the courtroom Monday, he was soft-spoken and polite. When one young, black-clad hacker gushed, "I just need to shake your hand," Goldstein obliged quietly, his long, curly hair draping a wrinkled forehead and downward glance.

Get him talking about the need to protect DeCSS, which a judge outlawed late last year, however, or the public's right to distribute it, and you'll see a pair of burning brown eyes and an entirely more vocal man. Before cameras, critics and supporters this week, Goldstein continues to argue that DeCSS is not a tool for piracy as the studios claim, but rather the only mechanism that allows you to play a DVD on a computer running Linux. And the Digital Millennium Copyright Act, the law that appears to make illegal DeCSS technology simply because it circumvents copyright control, is, he says, nothing less than a colossal mistake.

"The DMCA is an example of what can happen when laws are written by people who don't know what they're talking about," argues Goldstein. "It has to be revisited. If it's not, I don't see how technology will ever move forward. It will make it impossible for people to figure out how to understand technology and make it better. It will scare people off, leaving only a small community of outlaws."

The studios' trade group, the Motion Picture Association of America (MPAA), would like to isolate Goldstein as one of those outlaws, but ultimately the importance of this trial has little to do with Goldstein's innocence or guilt in distributing a software program over the Internet. This is a major battleground in the tug of war for digital distribution rights.

"It's a landmark case because it tests the limits of copyright," says Mark Radcliffe, a law partner in Palo Alto's firm of Gray Carey Ware and Friedenrich. "Before the DMCA, copyright law controlled merely behavior -- the act of copying -- but now, the law is extended to possession, simply having a tool that could lead to copying."

This aspect of the DMCA, called the "anti-circumvention clause," is the crux of the DeCSS case. Whereas the recording industry is suing the popular music-swapping service, Napster, in part under the older copyright theory of contributory infringement -- meaning that the company allegedly helps people steal copyrighted music -- the movie studios' DeCSS suit focuses solely on the act of circumventing the studios' control.

"There's an important legal difference between the Napster case and this one," says Leon Gold, one of the studios' attorneys. That case is about whether swapping music files is equivalent to stealing; this one is about whether a software program undermines the ability of copyright holders to determine how their content is consumed. "That's why the number of DVD copies made is irrelevant. There will be severe damages to the plaintiff unless the court enforces the anti-circumvention statute, but there are already severe damages. We've lost control. The greatest harm is that DeCSS took away what Congress gave us."

Goldstein's attorneys roundly disagree. "The DMCA was written to prevent piracy, not access to the content," says Robin Gross, a staff attorney at the Electronic Frontier Foundation and a member of Goldstein's defense team.

"It's the principle," Goldstein says. "Right now, we have a law that's made it illegal to show people how things work. We didn't even figure DeCSS out, we just posted the code. I don't think this is what Congress intended."

But of course, what Congress intended will be interpreted by Judge Lewis Kaplan, who on Monday seemed willing to reject almost every objection from Goldstein's team, in some cases before the lawyers had a chance to speak. He also denied their motion, filed Friday, asking him to recuse himself for conflicts of interest; Kaplan counseled Time Warner, a plaintiff in this case, on DVD issues in 1993.

Regardless of which way Kaplan tips in this jury-less trial, an appeal is expected. Both sides have expressed interest in taking the case to higher courts. In fact, it has a decent chance of going all the way to the Supreme Court, says Mark Lemley, a law professor at the University of California at Berkeley, whose Duke Law Review article Judge Kaplan quoted at length when he enjoined 2600.com and Goldstein from posting DeCSS in January. However, that would only postpone the inevitable effects of the case, he says.

"Looking at the bigger picture, how this case is decided will determine how digital video will develop," says Lemley. "It could establish the pattern of fighting new technology rather than working with it. On the other hand, if the studios lose, they'll find some way to work with digital video, which would be better for them in the long run."

"Practically, the decision in this case won't matter," says Lemley. "There are technological developments showing that digital video will follow digital music whether the court rules for or against DeCSS."

In fact, at least one company, Intervideo, says it will release a DVD player for Linux systems within a year. And DivX, an increasingly popular compression technology that shrinks video files by more than half, making piracy easier than ever before, could soon become widely available. According to a Wall Street Journal report, Jerome Rota, a creator of DivX, which uses MPEG-4 compression and a hacked version of Microsoft's Windows Media Player, expects to have a legitimate, improved version out within months. By that time, he may even have some competition. Jan Stevos, who helped develop a Mac version of DivX, says that his team of programmers plan to release their own open-source version called "3ivx" by Halloween.

In order to show that DeCSS is primarily used to illegally copy DVDs, not just watch them on Linux machines, attorneys for the movie studios used examples from both DeCSS and DivX, (which bears no relation to the failed Circuit City service), to argue that widespread video piracy is just around the corner.

To that end, they called Carnegie Mellon computer scientist Michael Ian Shamos, who testified at the DeCSS trial that DivX was easy to use and had the potential to make pirated movie trading as popular as MP3-swapping on Napster. Using a tutorial at the DivX-help site FM4.org, Shamos said it took about 20 hours to find and trade DVDs in the DivX format; in cross-examination, he added that some DVDs, including "Fight Club" and "The Jungle Book" don't translate to the DivX format.

Having tried DivX myself, and found it incredibly complicated and the video quality abysmal, it's hard to believe that DeCSS and DivX will cause movie studios to suddenly wake up one morning anytime soon, "finding out they've been Napsterized," as the studios' lawyer, Leon Gold, phrased it in his opening statement.

Still, few disagree that technological developments are already making the present case look outdated. "Before the decision comes out, you'll have a new technology that makes [DeCSS] obsolete," says Per Johansen, father of Jon, the Norwegian teenager who allegedly helped write part of DeCSS. Both Johansens have been charged with criminal unauthorized access in Norway (Per is implicated because Jon used his father's company's Web site to post the code), and came to New York for last weekend's H2K hacker convention and to rally public support for the DeCSS cause.

They cited the proliferation of the banned code -- on mirror sites all over the Web, not to mention on the T-shirts sported by hackers at the worldwide hackers' conference held last weekend at New York's Hotel Pennsylvania -- as proof that DeCSS and other technologies are unstoppable, regardless of how the courts rule. (Think Gnutella.)

"The toothpaste is out of the tube," says Jim Gleason, president of the New York Linux users group, and leader of the outdoor protest. "You can't stick it back in."

But the existence of new technology doesn't necessarily spell bad news for the movie industry, say DeCSS supporters like Jason Nodens, 21, a freelance computer engineer who attended H2K. "Look at what happened with video," he said, standing beside a "FUCK THE MPAA" billboard. "They thought it would kill them and now it brings in millions."

"I generally think the courts are pretty useless, but in the case, if the MPAA wins, some people will be too afraid to create new things that benefit society and that earn a profit," Nodens added.

Meanwhile, other DeCSS supporters feared lesser evils. Take Frank de Lange, a "hacker for hire" from the Netherlands who spent most of Monday outside the courthouse playing his guitar and singing an anti-MPAA song set to the Village People's "YMCA" melody. His concern lies with literature.

"Personally, I don't give a hoot about DVDs," he said. "I care about books, so what this case means to me is that if Microsoft puts out the next Stephen King book on its MS-Reader technology, and if I figure out a way to read it on my Linux computer, I'm breaking the law. It's not about the money -- I'd pay for the book -- it's about access."

To Goldstein, though, even access doesn't get to the heart of the matter. What he's fighting for is the right to publish code, regardless of its application. Not all of Goldstein's supporters would agree with this stance; indeed, Peter Bergson, a 32-year-old software engineer from Bristol, Conn., said he wished pirates would stop using DeCSS. But when I asked Goldstein if he felt frustrated that people could use the DeCSS DVD-player software for piracy and therefore hurt his chances of winning this case, his head shot up. He squinted and stared with what looked like confusion at Bergson's ignorance.

"You can use perfectly benign elements to create an atomic bomb," he said. "It doesn't mean any one of them should be outlawed."