The husband from hell

He became my angel of mercy. 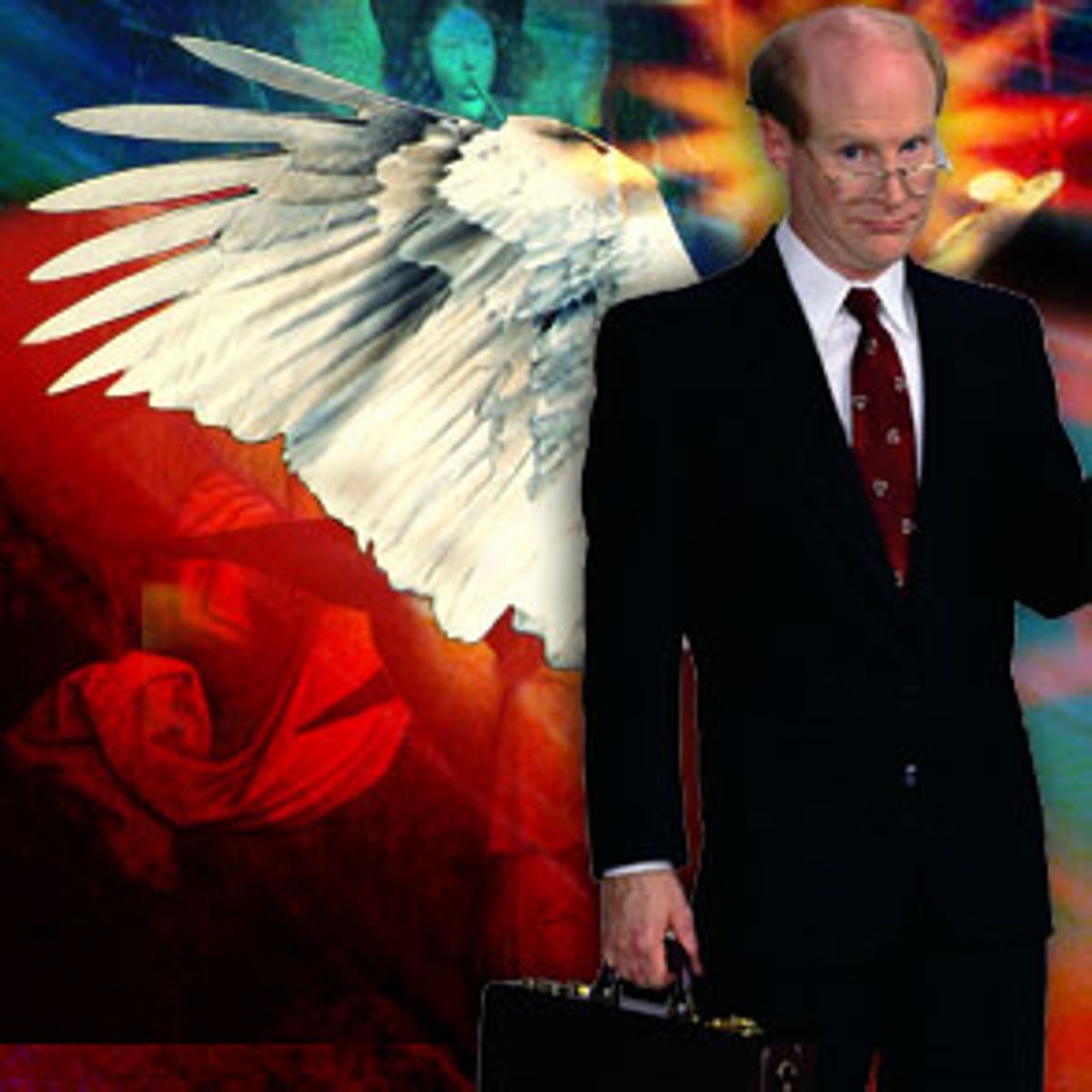 My first husband, Tom, turned out to be kind of a horror. Eight years into our 12-year marriage, he began disappearing for days at a time, and when confronted, he would vanish again. He ignored my pleas, my questions, my tears. Eventually, he stopped talking to me at all unless it was to chitchat or to disparage me in public. Finally, calmly, he told me he wanted both me and our marriage gone.

Because there was nothing left to do, I began a new life, still clinging half-heartedly to the hope that he'd change his mind. I clung for about a year, right up to the day that a strange woman called, introducing herself as Tom's girlfriend -- a woman he had been seeing behind my back for three years. (She wanted some relationship advice.)

All right. There it was. Tom was a disgusting, adulterous, vile husband. I finally served him with divorce papers, asking for no alimony at all, because I didn't want to ever have to think about him again, or even see his name, even if it was on a nice fat check I surely could have used. And besides, by then, to my astonished delight, I was madly in love with someone else. I had begun to think about remarriage, maybe as soon as the ink was dry on the divorce decree.

Unfortunately, it was Tom's unoriginal conviction that if he didn't want me, he didn't want anyone else to want me; being a lawyer, he knew all the tricks necessary to hold up a simple divorce. He disappeared to avoid signing the papers. Then he claimed he lost the papers. Finally, he filed his documents so incorrectly that the judge refused the divorce, and it had to be done all over again.

I was furious. "No matter what you do, I'm getting married," I told him. What should have been a simple filing for divorce took two years, but it did happen. All that was left was to have it finalized. Nick, my fiance, and I were delirious. We celebrated by buying wedding bands, by setting a date and booking the Greenwich Village restaurant where we wanted to be married. "I'll never have to think about Tom again," I told Nick.

And then Nick died. All of a sudden. A heart attack so massive, not even a miracle could have saved him. Crazy with grief and rage, I looked for someone to blame and the most likely suspect was Tom. I called to scream at him, to vent my fury and grief. I raged at him because all his disappearances and legal tricks had postponed my wedding, denying me time when I could have been married to Nick, the man I loved more than I had ever even considered loving Tom.

I was ready to slam down the receiver when he suddenly interrupted. His voice was quiet and sure. "I'm flying to New York to take care of you," he told me. "I'll do whatever you need to make you feel better."

Every weekend for nearly three months, Tom flew into New York. Because staying at the home I had shared with Nick was torture, Tom booked me into suites in expensive hotels neighborhoods away. He stayed with me so I wouldn't be alone. We each took a bed and we both wore pajamas and the only time he touched me was to hold me while I wept, to wipe my face with a cool cloth.

He let me talk on and on about Nick and he never once looked away or talked about his life or talked about the life we had once shared. He gave me money because I was in no shape to work. He made sure I ate, taking me to the best restaurants in the city; and when I decided that the best thing for me to do was just travel cross-country, staying one step ahead of my grief, he booked my flights and saw me off. "Take this," he said, scribbling something on a pad of paper. "It's my private line and my credit card number. You call any time. It doesn't matter."

I did call. At 4 in the afternoon and at 4 in the morning. For 10 minutes, for two hours. From Santa Fe, N.M., and from Santa Rosa, Calif. Tom never cut me off or told me he was busy. Sometimes he just listened to me weeping incoherently on the phone. He never told me to call back, and if he wasn't there, he called as soon as he got the message. I depended on him totally -- because I could.

Tom was there for me in a way he had never been -- ever -- during our marriage. "Why are you doing this?" I asked him in a call from Lubbock, Texas. "Why are you suddenly being so good?" I heard the wires humming.

"Penance," he said finally. "I made myself a promise that I'd be there for you whenever you wanted, the way I should have been there for you all the years we were together."

If there is such a thing as karmic debt, well, Tom paid his and then left a little as an advance on the next crisis. He put his work and his life on hold to be at my beck and call. When I came back to New York, he came back, too. He never once kissed me or crawled into my bed with me or even spoke of whatever feelings for me he might have still harbored. For the first time in our relationship, he was exactly who and what I needed when I needed him to be it: a safe, asexual male presence. A whipping boy. A shrink. A comforting father. A comic to get me to smile a little. And for all that I was eternally grateful.

My grief began to abate. I got to the point where I could walk into my home and not feel physically ill from my memories; I could spend a night alone and not need alcohol or drugs to douse my sorrow. I could go out and have a nice evening with friends. I could go back to work, be with people. I could feel hopeful about my life. And gradually, my time with Tom began to taper off. I didn't need to have him be with me or call me every night. And when I did call him, I was healed enough to want to know something about his life, and strong enough to let him tell me.

"Well, I'm looking for change," he told me. He was thinking of getting out of the law entirely, it wasn't satisfying for him anymore. "Maybe I'll go get therapy," he told me.

"I'm glad," I said. And I was. I called him a few more times after that, on bad nights when a movie had reminded me of my loss and I had had to leave the theater in tears; when I found an old touching card Nick had once given me. And sometimes, too, I called Tom on good nights, when I felt happy, when the city seemed promising to me again. We always talked for a while, exchanging news, and every single call, Tom always asked, "Are you OK? Is there something I can do?" And more and more often, there wasn't.

And then the divorce was final, and maybe it surprised and silenced us both, because our conversations stopped. We both moved on.

Until a few years later.

I had deliriously, happily, remarried and my husband and I had run out of money doing renovations on our house. We couldn't get a loan and things were beginning to look desperate, and the only person I knew who had both wealth and generosity was Tom. "You can't possibly call him!" my husband protested, but I laughed. "Oh yes, I can," I said, and so, out of the blue, I did.

We talked a little bit. I told him about my marriage, about my home. He told me he hadn't left the law, hadn't gone into therapy. But he was remarried, to a woman I didn't know. And when I asked for money, well, he came through. "I wish it could be more," he told me. His voice grew low, hesitant. "But I'm thinking of leaving my wife. I think I'm in love with someone else."

Some things always and never change. I didn't comment, didn't give advice. Instead, I thanked him for the loan, and I hung up. Tom, my husband from hell was once again my angel of mercy.

I guess it's funny. Tom and I fell out of touch not long after that. I talk with his sister, who was and is close to me. Every once in a while, I still think about him, wonder how he's doing, and sometimes I ask her. But now, even though Tom and I don't really have contact, when I think about him, it's never as my terrible first husband. Instead, it's as a sort of friend.