The owner of the bushmccain2000 domain hopes to cash in -- but he won't take money from the Trilateral Commission. 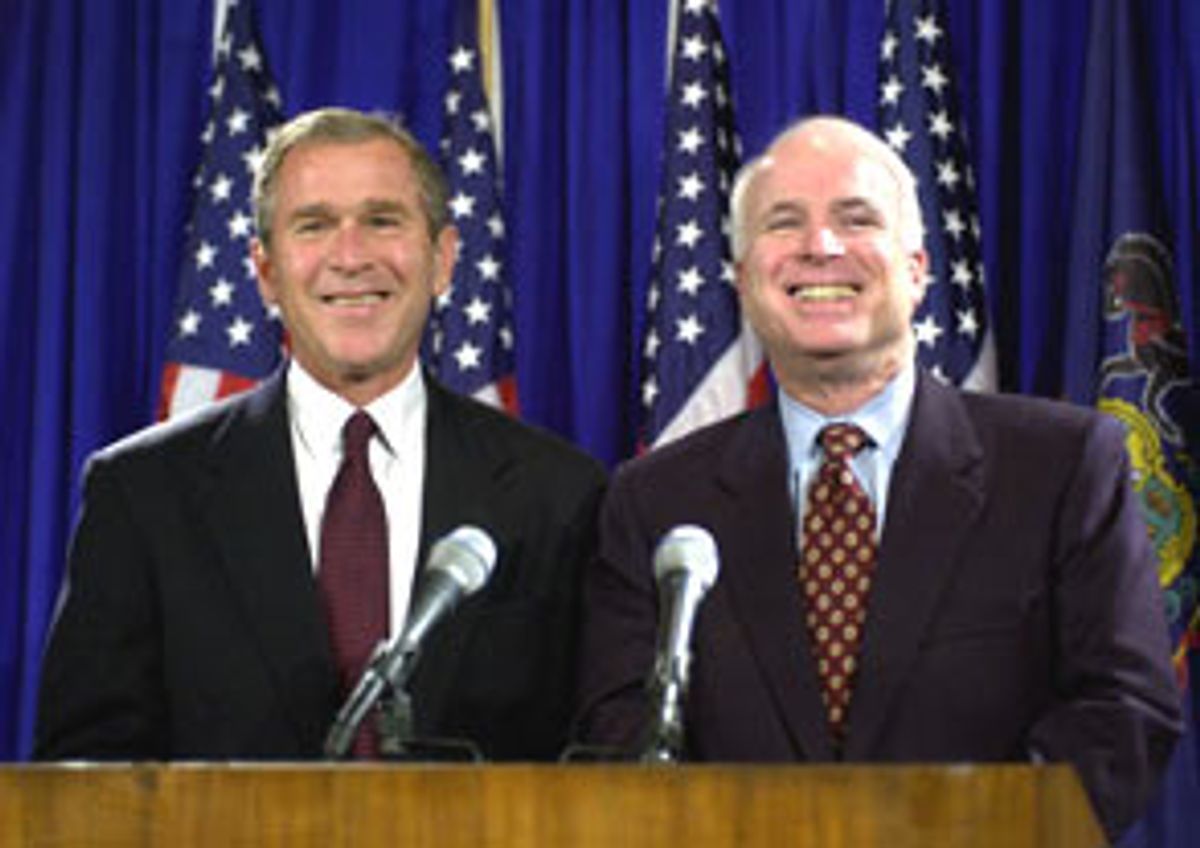 Speculation is quickly moving away from pro-choice governors like Tom Ridge of Pennsylvania and George Pataki of New York in the GOP veep race, while a renewed focus is being placed on some of the more recognizable names in the Republican Party, including one-time bitter Bush rival John McCain.

Former McCain campaign sources told Salon Thursday that there is a "Draft McCain" movement underway among "some bigwigs within the party." But they say McCain has not been subjected to the extensive background scrutiny that some others have. Of course, it's always nice to paint a portrait of your boss as the reluctant warrior who answers the call for his party and his country (not to mention his ego). Whether this is real or simply a way to focus some of the spotlight back on McCain before next week's convention all remains to be seen.

Several readers have written to ask about another once-prominent Bush veep possibility, Liddy Dole. But if the pick is Dole or McCain, Bush campaign manager Karl Rove will have some bargaining to do -- not with the nominee, but with the owner of key Internet domain names. The Bush camp cleverly bought up potential spoof sites for their candidate early, just not early enough in some cases, according to Internet domain registrar Network Solutions.

All of the prime domains involving a Bush/McCain or Bush/Dole combination were snatched up long ago. A Florida woman named Judith Diane Podnar has the rights to bushdole.com, while Eric Phillips of North Carolina has dibs on bushdole2000.com. Bushmccain.com is registered to Anne Zissu of Pennsylvania, while Keith Grant of Idaho Falls says he has owned bushmccain2000.com for more than two and a half years. "I thought it was the ultimate ticket," Grant says. "If only those two guys could get their egos in the same room."

Grant says he has been approached by "people who want to do contradictory things" with the virtual real estate, and that he has been offered upwards of $35,000, though he wouldn't elaborate either on who made the offers, or what they planned to do with them. Grant, a registered Republican, says he was worried the domain would fall into the wrong hands. "I'm not going to sell it to the wrong people. I'd like to sell it to the campaign," Grant said.

He says he has contacted both the Bush and McCain campaigns directly, but has not received a call back. "It's strange," he said. "It's not like I was trying to threaten or leverage them or something." Grant says he doesn't know whether he's struck the political jackpot, and doesn't say how much money he would ask for if hes picked the right names.

"I have no clue what the ticket's going to be. But if you're not part of the Trilateral Commission, you get assassinated, anyway," Grant says. "Just ask John Kennedy."

Then again, there's a chance Rove guessed right when he stocked up on domain names. Below is a list, from Network Solutions, that Rove purchased in his effort to beat cybersquatters, and professional meddlers, to the punch: