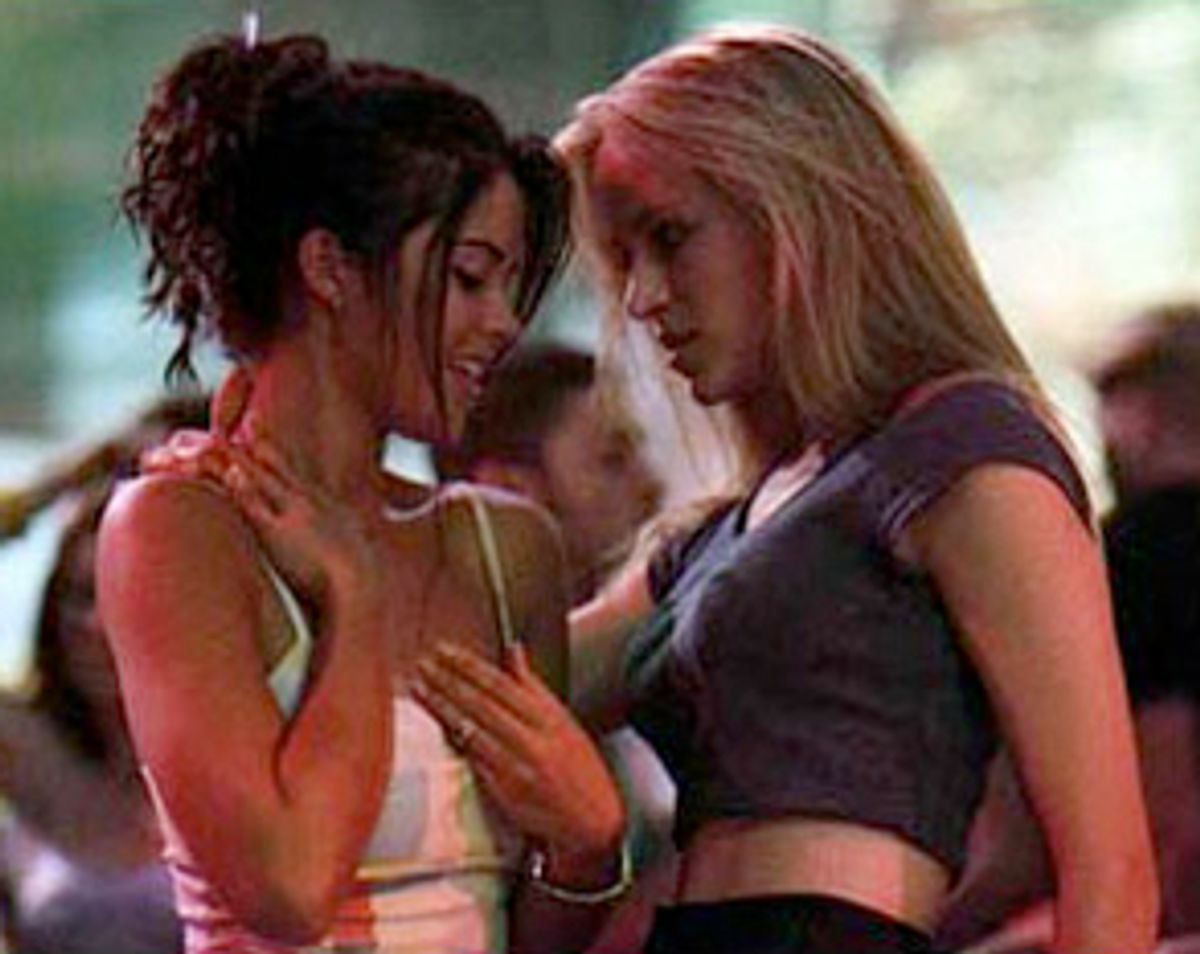 Perhaps the time has come to forgive, although forgetting may be impossible. After "Pet Sematary II" flopped in 1992, Lambert was banished to made-for-TV filmmaking for the rest of the decade. I can't help wondering, in the depths of my guilty-liberal conscience, whether being an ambitious woman in the Hollywood boys' club had something to do with that. (No one has stopped giving money to Joel Schumacher, whose sins, God knows, are at least as noxious.) At any rate, it seems that television allowed Lambert to find her level. After making such idiot-box delights as "Dragstrip Girl" and "My Stepson, My Lover" (I couldn't make up anything that excellent), she's back on the big screen with "The In Crowd," a lesbo thriller stocked with no-name babes that revels in its own trashiness. It pretty much makes "Wild Things" look like Jane Austen.

Unfortunately for Lambert, this hasn't been a good summer for the previously golden genre of post-teen thrillers. In the wake of similarly themed failures like "Gossip" and "The Skulls," Warners seems to be dumping "The In Crowd" in hopes of a future video payday (it's pretty much a guaranteed pay-per-view hit). There were no press screenings before the film opened, so I paid to see it with a listless group of 15 or 20 Times Square denizens on Wednesday afternoon.

Lambert certainly has an eye for pulchritude in its more crass and conventional forms, and her supervixen discovery in "The In Crowd" is a voluptuous brunet named Susan Ward, who should have a long career of playing evil American goddesses ahead of her. (Well, at least three or four years.) I'm embarrassed to admit that I recognized Ward's seal-sleek complexion and ambiguous blue-gray eyes immediately, from her role on the now-defunct Aaron Spelling soap "Sunset Beach." I did not, however, recognize her good-girl costar, Lori Heuring, as No. 64 on Maxim magazine's list of the 100 hottest women in the world. Perhaps I don't understand the category of "hotness" too well; although she's a competent actress (by the standards involved in this kind of movie), Heuring is kind of a bony, anxious, bee-stung creature, with a slight resemblance to Lambert's old pal Madonna.

Heuring plays Adrien, a released psychiatric patient who comes to work at a ritzy country club on a South Carolina beach. In short order, Brittany (Ward), the ruling diva of the club's rich-kid set -- referred to by the staff as the Royal Swine -- feigns drowning in the pool so Adrien will have to rescue her and perform mouth-to-mouth resuscitation. Yowza! (Or so we are supposed to think.) Actually, Brittany's interest in the new girl is not precisely sexual but more, you know, like, dark. Or something. Adrien's likable pal Joanne (Kim Murphy), who knows what happens when staffers forget their place, warns, "That girl's got some fangs." But oh no, Adrien won't listen. Pretty soon she and Brittany are hanging around shirtless (this movie is rated PG-13, so despite its rampant titillation level there's no actual nudity), swapping dresses and going on rave-club boy-teasing expeditions.

All this is delivered with the high-gloss "MTV Beach Party" voyeur style you'd expect; I will happily admit that Lambert (aided here by cinematographer Tom Priestley Jr.) is a master of eye candy. The particular brand of suntanned but not quite wholesome sexuality that Ward oozes makes her look like a nasty girl even in plaid golf shorts, which for my money is quite an accomplishment. Then there's the script by Mark Gibson and Philip Halprin, who I imagine sat around slapping the table as they came up with their atrocious double-entendres. When a dishy hunk with ripped abs whom Adrien has been eyeing accidentally splashes her, he smirks, "Sorry about that. Didn't mean to get you all wet." Golf-instructor Matt (Matthew Settle), who's actually supposed to be a nice guy, advises her on her stance: "Now, Adrien, you might consider spreading your legs a little wider."

Beyond its trashier delights -- actually, my favorite is the scene where Brittany shows up to volunteer at a hospital wearing Manolo Blahnik heels -- "The In Crowd" does a nice job of capturing Adrien's marginal, between-worlds status. Even when she starts spending her nights at Brittany's "Lifestyles of the Rich and Tasteless" parties, her days still belong to the resort's backstage world of kitchens, cellars and pool machinery.

When the movie finally settles down from all its faux-risqui bad behavior into predictable psycho-bitch thriller mode, however, there's entirely too much plot to work through; I got bored of it pretty quickly. In brief, Adrien is a dead ringer for Brittany's missing sister Sandra, who left Matt heartbroken, with only Brittany to bathe his wounds. But guess what? Good old Brittany may know more about her sister's disappearance than she's letting on, and for good measure is trying to silence a former lesbian lover, seduce Adrien's shrink and pimp Adrien off to her sleazy friend Tom (Ethan Erickson) so she can have Matt to herself.

Brittany eventually becomes the kind of villain who observes and overhears everybody else's conversations so that she's always three steps ahead of Adrien, who in turn is the kind of heroine who'll go out and confront an armed maniac alone, late at night, while wearing a ball gown. Among the supporting cast of highly convincing prep-school cokeheads, Nathan Bexton makes a fine impression as Bobby, a good-natured kid slightly out of his depth who nonetheless sees Brittany for what she is. Driven along by a passel of up-to-the-minute dance tracks and a fine electronic score by Jeff Rona, "The In Crowd" may be garbage, but it's professional and occasionally delicious garbage. In a different summer (like, say, last summer), it might have been a hit. Mary, I almost feel bad about all those mean things I said. But consider the Scripture: As ye have sown, so also shall ye reap.