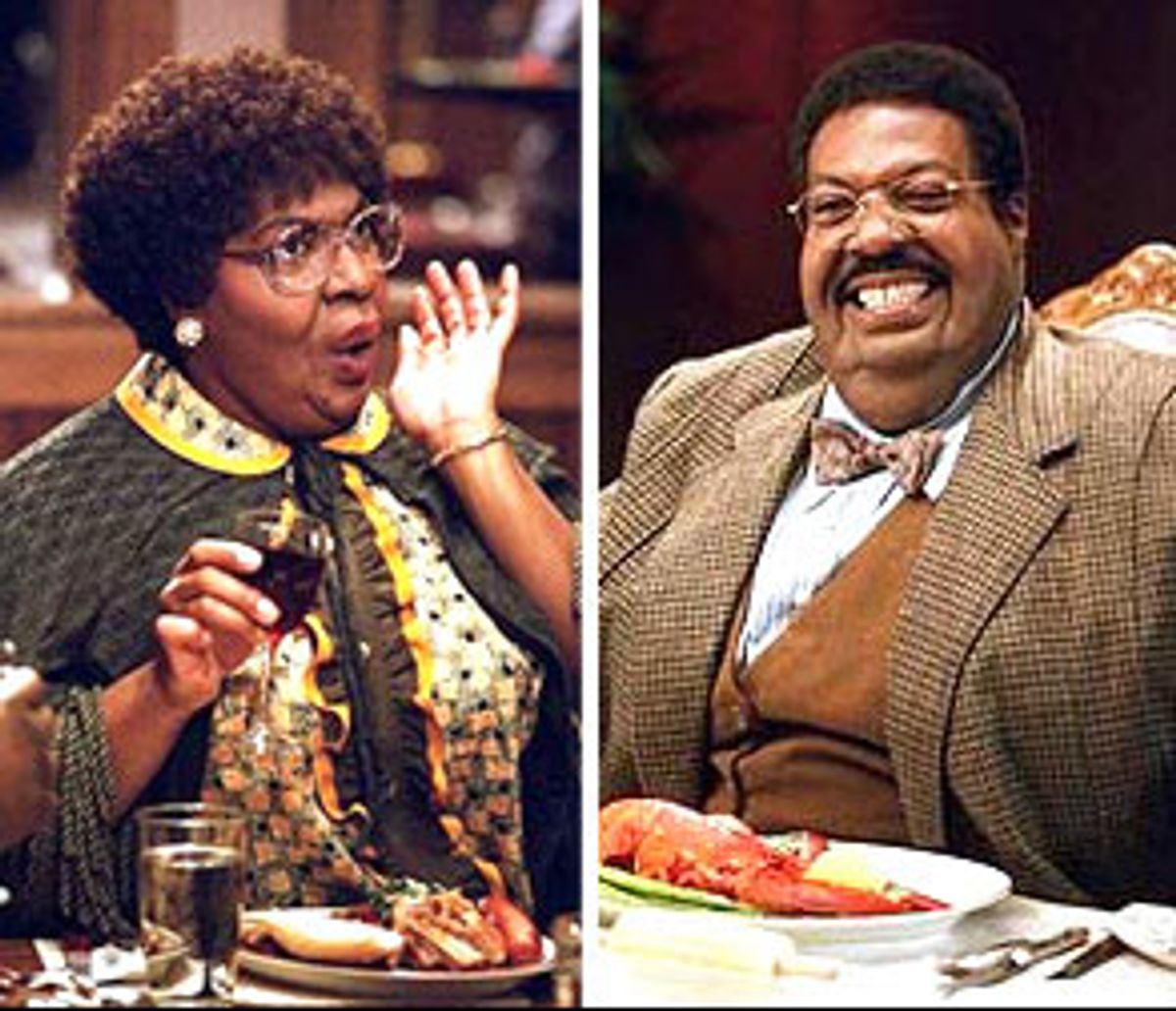 Eddie Murphy is such an enormous but undisciplined talent that he gets into trouble when playing ordinary movie roles, as in the mediocre "Bowfinger" or the vile "Beverly Hills Cop" series. It's a tiresome showbiz axiom that all comedians are filled with bitterness and pain, but like most tiresome axioms, it holds some truth. In Murphy's case, unpredictable emotion is apparently so close to the surface that being boxed into some lame screenwriter's idea of character tends to turn him into a mean-spirited, hyperactive creep.

On the other hand, Murphy in his most genial mode can nearly carry an entire movie just through free-form goofing around, which is about what you get with "Nutty Professor II: The Klumps." If the novelty has worn off Murphy's delightfully sympathetic and elegant portrayal of the shy, sweet and enormous Professor Sherman Klump, it remains a landmark in his career that's well worth visiting twice. Of course, through electronic wizardry and some remarkable makeup effects (even better this time around), Murphy also plays all the members of Sherman's extended family. Sure, this is a parlor trick, but it's a hell of a good one.

The Klumps may be familiar grotesques drawn from the rich tradition of African-American family comedy, but Murphy views them all, even lascivious Granny, with undisguised affection. They all have distinctive personalities, although the women, interestingly enough, seem more clearly delineated than cantankerous Daddy Klump and Sherman's dunderhead brother, Ernie. My favorite remains the bighearted and slightly prim (but sexually frustrated) Mama Klump, who I could swear used to dish me out beanie-weenie and fruit cup at Columbus Elementary School.

Inevitably, "Nutty Professor II" -- whose plot is nonsensical even by the exaggerated standards of farce -- plays more like a few TV-comedy sketches incoherently strung together than a real movie. Director Peter Segal ("Tommy Boy," "Naked Gun 33-1/3") and his five credited screenwriters (!) seem to be playing a desperate version of Can You Top This? as they seek to out-Farrelly and out-Wayans the comic competition. Sherman's slender, testosterone-fueled alter ego, Buddy Love, returns by literally erupting out of Sherman's orifices -- during Sherman's wedding ceremony! And that's just the first scene. Later on, there's the aggressively amorous giant hamster created by Sherman's genetic experimentation and a dream sequence, spoofing both "Star Wars" and "Armageddon," in which Sherman destroys the Earth (along with the moon for good measure).

Jada Pinkett, who although undeniably lovely seemed out of place in Murphy's first "Nutty Professor," has been replaced by Janet Jackson as Denice Gains, a fellow member of Wellman College's science faculty and Sherman's new love interest. It's Jackson's first big-screen role since "Poetic Justice" in 1993, and to my surprise she's a relaxed, agreeable performer. Despite her va-va-voom figure, Denice is an earnest, bespectacled creature who wears studious wool suits and cracks science-nerd jokes about polynucleotides with Sherman.

Even though Sherman no longer ingests the Dr. Jekyll weight-loss potion that turned him into Buddy in the first film, he now suffers from occasional schizophrenic assaults from the caddish Buddy personality locked within him. So when he shows up with a mariachi band to propose to Denice from beneath her balcony, Cyrano style, the customarily bashful Sherman ends up humping the ground in a goofy break-dancing routine and offering to put some beef in her taco. OK, so maybe this is a little bit ripped off from Jim Carrey in "The Mask" and Jonathan Richman in "There's Something About Mary," but so what? It's still hilarious.

Meanwhile, all kinds of other stuff is going on; as my idol, B-movie critic Joe Bob Briggs, used to say back in the innocent '80s, there's too much plot getting in the way of the story. Sherman has discovered a possible fountain-of-youth compound that his nemesis, the nefarious dean (Larry Miller), wants to sell to a pharmaceutical company for $150 million. (Miller actually gets the movie's biggest laugh line, to wit: "Look, Mommy! There goes the hamster's bitch!") Daddy Klump has gotten fired, suffers from a level of erectile dysfunction Viagra can't cure and sets a restaurant on fire with his flatulence. Denice may be leaving Wellman for a job in Maine. And, fatefully, Sherman decides that with the help of genetic engineering he can remove the troublesome Buddy personality from his brain forever.

Now, anybody who has seen his share of "Star Trek" episodes knows you can't split somebody into good and evil personalities without bad things happening. Without Buddy, Sherman begins to lose the intelligence that distinguishes him, and as hackneyed as this plot tangent is, Murphy's characterization is so finely tuned he makes it play as tragedy. Buddy gets accidentally reconstituted as part man and part dog (I'm afraid I can't explain it any better than that); he looks like shark-smooth Eddie Murphy, but is always up for a little butt sniffing or a game of fetch. With Sherman's brainpower in decline, Buddy has his eyes on the magic formula and the $150 million. So he breaks into the Klump residence, only to be cornered by the toothless and ravenously horny Granny Klump, who purrs at him, "You look just like Ken Norton in that movie 'Mandingo.'" (Earlier, Granny has detailed her fantasy involving NBC anchor Stone Phillips in a tobacco warehouse.)

Finally, of course, Denice, along with Sherman's loyal graduate student, Jason (John Ales), and even the resentful dean, must work to reunite Sherman with his exiled libido. As Buddy is pitching to the pharmaceutical company's board, Sherman arrives to exclaim, "I cannot go on living without this man inside me right now!" In truth, the entire Buddy plot in "Nutty Professor II" feels like an elaborate misfire, a threadbare excuse to keep the movie going from one Klump episode to the next. But there's more than enough cheerfully vulgar humor in this ungainly enterprise -- along with more than enough sentimental mush -- to delight midsummer multiplex-goers by the millions. Really, the only downside is that it's likely to spawn another sequel ("The Klumps vs. Godzilla"? "The Klumps Kick Some Adam Sandler Ass"?), when Murphy might be better served by letting his larger-than-life hero tiptoe gracefully into the sunset.