My favorite rumor gets no respect. 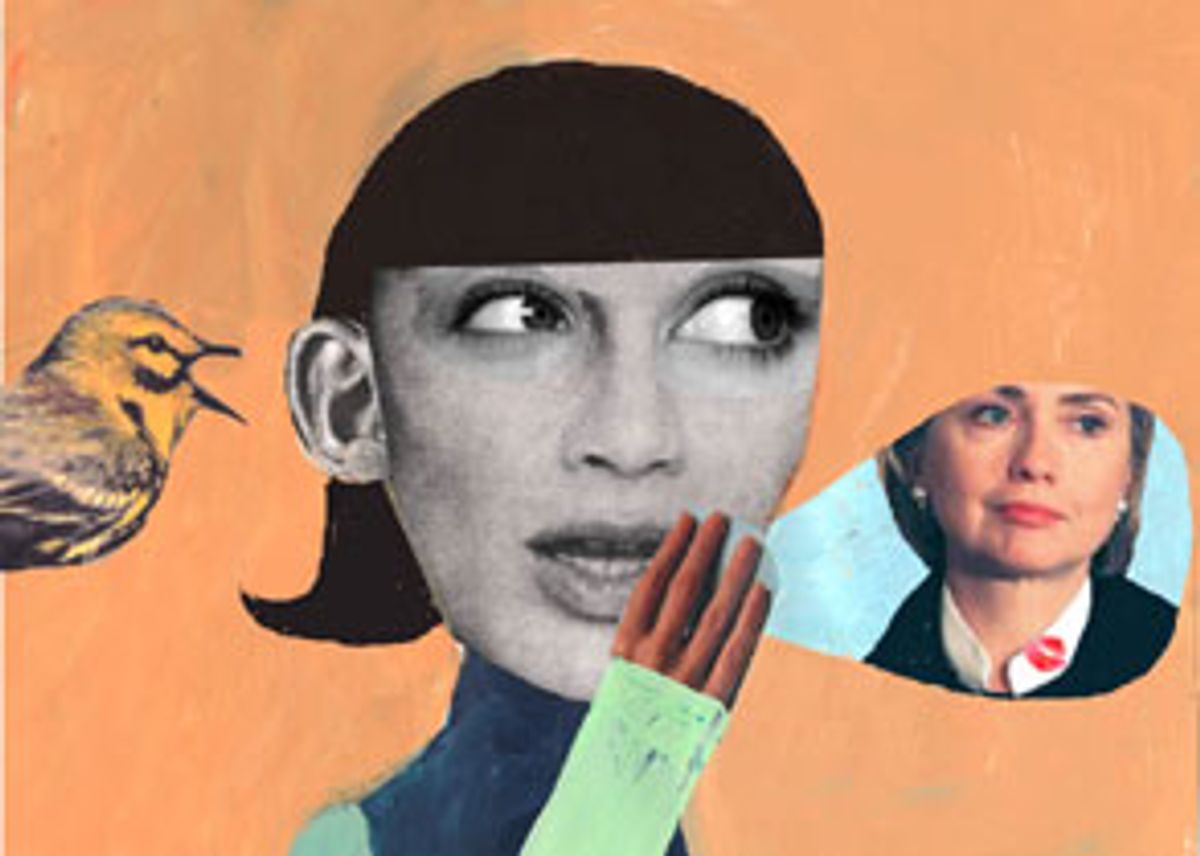 I am not always a good example for my children. I have tattoos, I drink a bit too much and, perhaps worst of all, I love to spread rumors. Oh, not so much about my friends. After all, there's little fun in taking delight in the downfall of mere mortals. Spreading the word that friends are breaking up or having affairs provides me with very little pleasure.

No, the rumors I like to spread are about famous people, especially politicians. There is something so luscious about hearing that some self-righteous politician who just came out for the "Defense of Marriage Act" was caught with his pants down in a whorehouse. And when the rumor moves from the tabloids to the mainstream press -- without actually gaining any more credibility -- I am filled with a devilish glee.

So when rumors about Hillary Rodham Clinton moved from the peripheral Post to the middle of the Times, I should have been dancing on air. After all, here was word that Hillary, that paragon of political sensitivity, had uttered an anti-Semitic remark. Here was a rumor, pure and simple, dancing through the most respectable of papers.

But it just wasn't making me happy. Instead, I was deeply disappointed by the silence about the other rumor that appeared in the same book as the one about the anti-Semitic remark. You know the one, the one that dares not speak its name, the one that keeps popping up all over the place but that the press refuses to publish.

Apparently it's OK to say that someone said that Hillary said a certain remark about a certain ethnic-religious group, but whatever you do, don't mention the L word, and I don't mean "liberal."

The lesbian rumor has been around for years. I myself have collected various versions of the "Hillary is a lesbian" rumor and mongered them to my heart's content. They are, after all, only rumors; but they're fun and naughty and maybe even true.

I first heard about Hillary's supposed Sapphic tendencies from someone who claims to have been her law school roommate. Then there was the editor from a very respectable publication who swore up and down at dinner parties that everyone knew Hillary had a girlfriend and that she met regularly with this girlfriend in New York (not unlike another first lady and her girlfriend, but that's a different story). Then there was the one about how said girlfriend was actually an actress who was on "Night Court," which may or may not have come from a former Secret Service agent, or maybe it was my hairdresser who told me that one.

Admittedly these rumors were often told to me by people who had evidence of flying saucers, but that didn't diminish their power as good dirt. These rumors are good because they're about secrets and sex, sex, sex. And sex and secrets are the narrative grounding of all good rumors.

A couple of years ago, during the Monica Lewinsky scandal, I was very nearly satisfied when the lesbian rumor popped into the media, but it only lasted for a microsecond. One of President Clinton's closest allies suggested that Hillary didn't like regular sex with men (thus forcing Bill to go elsewhere). But the rumor never really took off and I was left feeling stimulated, but not satisfied.

And then the "true" story of Hillary and Bill's marriage came out this month and the press -- the mainstream press -- began trading in rumors. I waited and waited for the stories about Hillary's "many" lesbian affairs to come to the surface. I'm still waiting. Oh sure, the National Enquirer ran a front-page story about "Hillary's Gay Affairs" (with a very tough and almost bull-dykey picture of the first lady on the front, I might add), but it has done that before. In fact, the National Enquirer even printed the "Night Court" rumor a while back. But this isn't really enough for me. I'm a serious rumor addict. I need more. I want the juicy stuff.

When I say this in front of my liberal Democrat friends, their faces turn purple and they point their fingers my way and talk about how the lesbian rumor would "cost Hillary the election." Many of these liberal Democrat friends write for the mainstream media, so maybe that's why they don't write about this. Apparently it's OK to be married to someone who has sex with 20-year-olds, but it's not OK to have a female lover.

I may be a bad example for my children, but I'm not that bad. I don't want them to have to face a world where it's so shameful for a woman to love a woman that even the prurient press is silenced. That, far more than rumor mongering, is just wrong.

In fact, faced with the ridiculous and homophobic silence of the mainstream media, spreading this particular rumor seems downright ethical. After all, I don't want my children to grow up in a world where presidential blow jobs and "dirty Jew" comments are "news that's fit to print," but lesbian relationships can only be spoken about in the shadowy realm of rumor and tabloids.