As Hollywood comedies get coarse 'n' coarser, ratings ain't what they used to be. 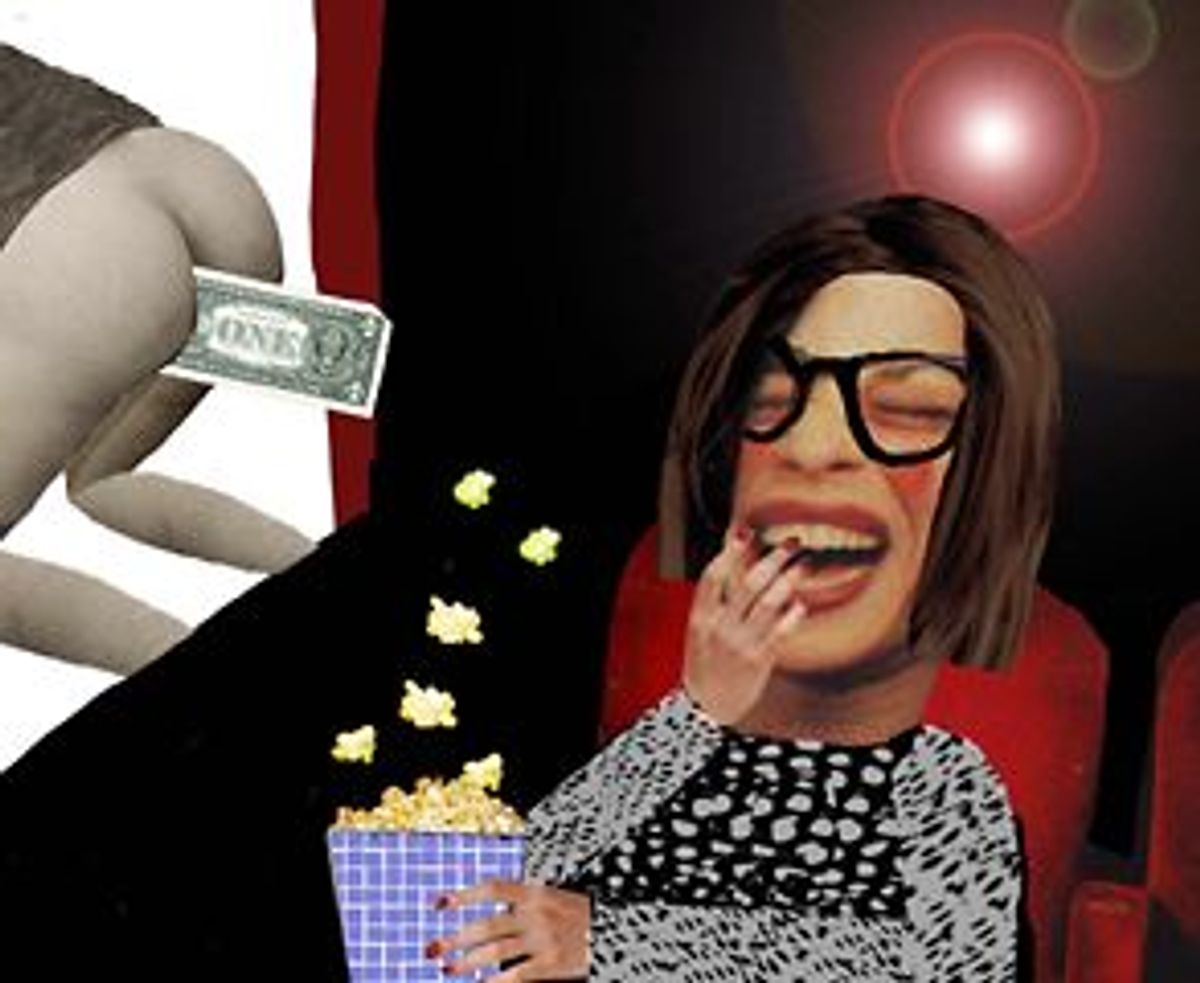 Thirty years ago, when Raquel Welch slapped on a strap-on in "Myra Breckenridge" and gave Randy Herren the ride of his life, the Motion Picture Ratings Board reciprocated with a stern X rating.

This summer, when a giant hamster (the result of a genetics experiment run amok) buggers college dean Larry Miller (who's first horrified, then smitten) in "Nutty Professor II: The Klumps," the ratings board awarded the movie a family-friendly PG-13.

The PG-13 rating may carry the "Parents Strongly Cautioned: Some material may be inappropriate for children under 13" caveat, but that hasn't been enough to deter the Eddie Murphy film from a $42.5 million opening weekend, making "Klumps" the fourth biggest comedy debut of all time (trailing "Austin Powers: The Spy Who Shagged Me," "Toy Story 2" and "Men in Black").

At the movie's Universal Studios premiere, a clutch of grizzled marketing execs stood shaking their heads in bafflement. "How did that ever get a PG-13?" one wondered. A Universal source later confided, "I can't even tell you how many times we resubmitted it to the ratings board or how many cuts we made to get the PG-13."

The R-rated "Scary Movie" -- with a gross (ahem) of $132 million and counting as of last weekend -- goes even further: Amid a torrent of T&A jokes, a character is impaled by an erect penis in a bathroom stall. Industry insiders were aghast that the over-the-top gag escaped a restrictive NC-17 rating (the modern-day, commercially ruinous equivalent of the original X).

Daily Variety editor in chief Peter Bart, who often functions as the industry's unofficial chaplain, wrote "From these latest effusions, it's clear they're not competing for laughs, just jolts. We're seeing wit fade before the onslaught of what Mel Brooks used to call 'dolt and filth.' And all with the blessing of those once-stern taskmasters at the motion picture code."

The new wave of post-Brooks vulgarians have clearly figured out how to beat the ratings board at its own game. Devised by MPAA chairman Jack Valenti in 1966 to ward off government censorship, the ratings board has had a long and contentious history with Hollywood's creative community. Though Valenti insists that the ratings system is entirely voluntary and protective, critics maintain it has become a de facto form of censorship itself.

Earlier this year, the board insisted that director James Toback would have to trim an opening scene (in which a white girl masturbates a black man) in his hip-hop fantasia "Black and White" to win an R rating. The bit was framed so that the actual action took place off-screen. But as Toback complained to me, "It came down to a question of elbow jerks. They said I had seven -- you have conversations that are otherworldly. It turned out they didn't want any of them." Several weeks later, the board pounced on Mary Harron's "American Psycho," OK'ing most of the violence, but disallowing a vigorous three-way scene in favor of something tamer.

There is a strange irony at work here: The movies on which the board comes down hardest are inevitably sophisticated art-house projects of limited appeal, movies that are unlikely ever to find themselves playing in the all-American mall. "Black and White" ultimately earned just $5 million; "American Psycho" only managed $15 million. Meanwhile, mass-market fare like "Scary Movie" and "Klumps" blithely fly through the system. The ratings board is so focused on real sex that raunchy innuendo that suggests plenty but cleverly shows little flummoxes its standards.

"I haven't seen all of this summer's movies yet," says Valenti. "I'm sure some are coarse and some are tasteless. But what the board looks for is overt sexuality, overt violence and the use of four-letter words. Movies can be raunchy and tasteless, but if they draw the line at really tough violence and overt sexuality, the ratings board has to reflect that with a fair and accurate rating."

Of course, it helps that unlike the more "serious" filmmakers, who dare to challenge the board, the gross-out yucksters are much more accommodating. They're willing to edit scenes, shave a few frames and move on. In last summer's "American Pie," for instance, the board objected when Jason Biggs adopted the missionary position to ravish a pie; the filmmakers quickly substituted an alternate take in which he has his way with the fruit tart standing up. (Both versions can be compared and contrasted on DVD.) And when that giant hamster rapes the dean in "Klumps," moviegoers don't actually see anything -- even if some little kid is likely to turn to his squirming mother and ask, "Mommy, what's that hamster doing to that man?"

Observes Valenti: "I equate tastelessness with a bore at the dinner table. If he doesn't use foul language, hit you in the face or screw the lady next to him, all you can accuse him of is a tasteless exhibition. The minute you start quantifying taste, particularly comic taste, you have trouble and the board doesn't do that. Personally, I thought 'Something About Mary' was a juvenile film, but I couldn't stop laughing."

And, with a wink and a nod, the summer's grossest comedies are laughing all the way to the bank.