Clint Eastwood, Tommy Lee Jones and a bunch of their withering old buddies are dying to go into space. 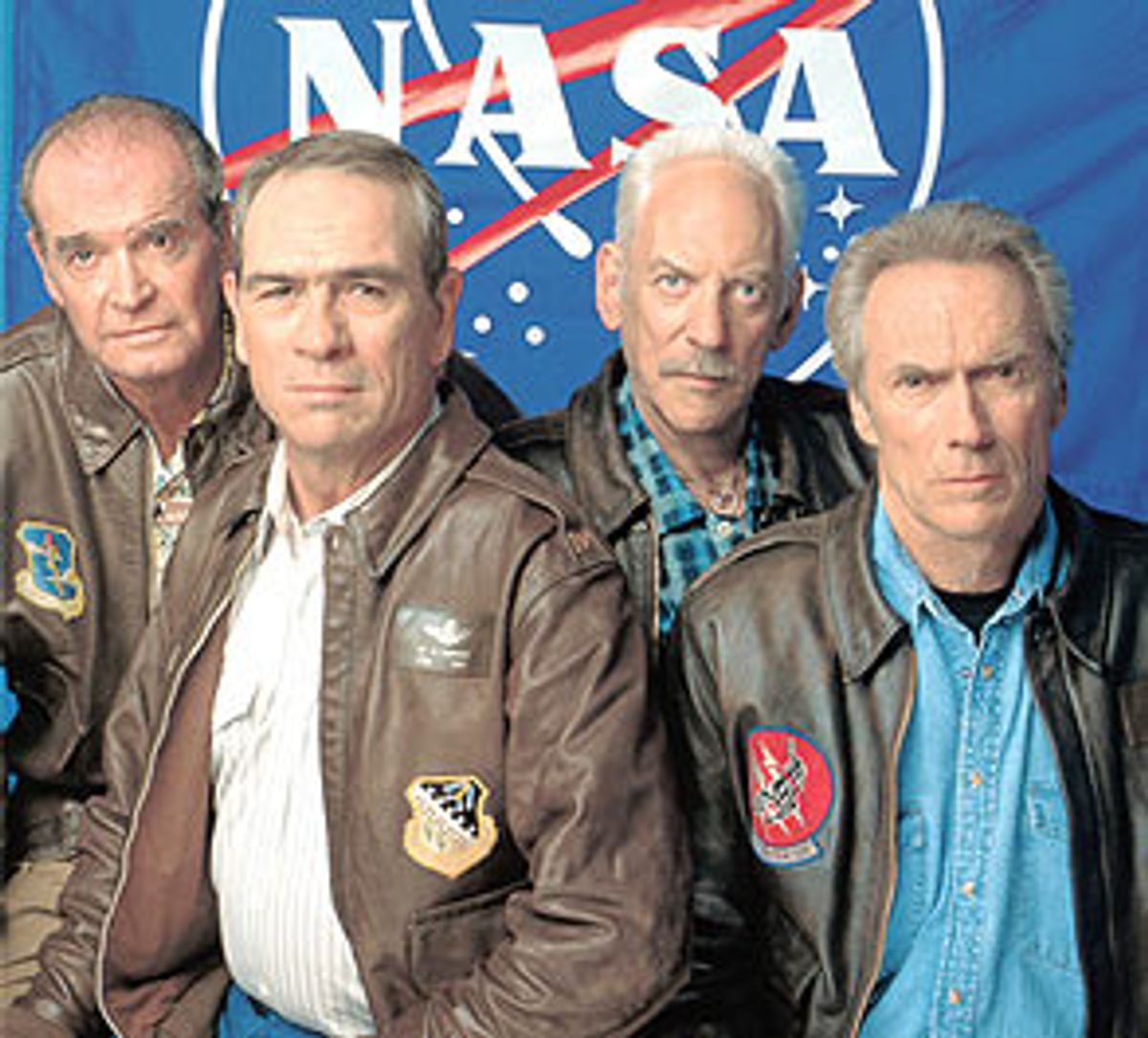 To anyone who grew up in the 1960s dreaming of space travel, the lovingly rendered technical details of "Space Cowboys" will probably strike a resonant chord. It was made with the avid cooperation of NASA, and features meticulously accurate scenes shot at the agency's space centers in both Houston and Cape Canaveral, Fla. In its best moments, Clint Eastwood's old-guys-in-orbit epic has something of that awe and wonder that I felt in front of my parents' bedroom's flickering, black-and-white TV, on which Neil Armstrong was mumbling clichis from the surface of the moon. There's a shot from the gantry at Cape Canaveral that made my heart stop for a second: As the astronauts stride along the walkway into the waiting rocket, we see from their perspective their last glimpse of green earth and blue sea. In its wordless emotion and optimism, there's more expression in those few seconds than in the rest of the film.

Folks, I'm grasping at straws here. I was thoroughly bored by "Space Cowboys," and spent most of my time in the theater searching for some reason to like it. I've always had a soft spot for Eastwood, and what fan of American movies doesn't? To quote Dr. Johnson (well, sort of), when you grow tired of Clint Eastwood you grow tired of life. He's a Hollywood masculine icon with non-loathsome politics and a passion for jazz (plus, like me, he's a proud son of beautiful Oakland, Calif., even if he was born across the bay in imperial San Francisco). Eastwood has never been a great director, but he's highly competent with the kind of genre work best suited to his talents; lots of filmmakers would be happy to have "High Plains Drifter," "The Outlaw Josey Wales" and "Unforgiven" on their risumis.

Unhappily, "Space Cowboys" plays more like a mixture of Eastwood's leaden Cold War thriller "Firefox" and the aimless goofballing of "Bronco Billy" or "Honkytonk Man" than like his better films. It can't quite decide whether it wants to be a comedy or an adventure film and winds up in the mushy middle, not funny enough for one genre and not exciting enough for the other. Its cast of aging stars is eminently likable: We get Tommy Lee Jones as a reckless cowboy with a broken heart, Donald Sutherland as a feckless pony-tailed lecher and James Garner as the third-rate Baptist preacher. Of course they have the audience rooting for them from the moment of liftoff, but amiability can only get you so far with a script this incoherent. Maybe summer viewers in search of completely unchallenging entertainment will find this an agreeable time-waster, but they, the director and these talented actors could all definitely do better.

For a man who knows music so well, Eastwood displays a remarkably poor sense of pace and rhythm here; "Space Cowboys" feels long and sluggish, although it's only a little over two hours. He wastes an enormous amount of time on the ground as his wisecracking quartet of geriatrics muddle through some pedestrian drama and employ NASA wizardry to prepare for their momentous space flight. When he's finally got them in orbit, the plot takes a few intriguing twists and we finally see some top-of-the-line Industrial Light & Magic effects. So Eastwood bombs through to the conclusion like a man with a plane to catch.

Eastwood's remarkable face has become so full of ridges, dry rivulets and deep ravines that it now resembles the Western landscapes of his classic movies. It's the most interesting visual element in "Space Cowboys," and Eastwood looks every inch the part of Frank Corvin, a retired aeronautics engineer and onetime ace pilot. As we learn in a predictable flashback (shot, unimaginatively, in old-timey black and white), Frank was denied the chance for glory in 1958 when NASA was created and decided to make a chimpanzee rather than an Air Force pilot the first American in space.

So when NASA honcho Bob Gerson (James Cromwell), Frank's longtime nemesis, sends his hotshot lieutenant Sara Holland (Marcia Gay Harden) to find Frank in California suburbia, Frank fixes her with his ice-blue glare and crunches the ice cubes in his iced tea. (That's what we in the criticism trade refer to as symbolism.) "Gerson's been taking credit for my work since '58, when he replaced my ass with a monkey," he growls. Unfortunately, that's Eastwood's last moment of being an inscrutable hard-ass. Of course Frank agrees to help Gerson out, although the two spend the rest of the film tediously pecking at each other like quarrelsome chickens. In this as in many other areas, Ken Kaufman and Howard A. Klausner's screenplay could have used another draft.

It seems an ancient Soviet-era satellite is falling out of orbit and the president wants NASA to save it, since the Russian space program is in ruins. (It's supposed to be a crucial communications satellite, but you'll probably figure out its secret before the cast does.) Its outmoded guidance system was one stolen by the KGB in the '70s, and was originally designed by Frank, of course. Since the young punks of NASA are entirely dependent on computers and other pantywaist gadgetry, he's going to have to go up there and fix the damn thing his own self.

There's really no reason this implausible plot might not work; after all, as Frank points out, NASA sent John Glenn into space (and he's eight years older than Eastwood, who is now 70). But the script ambles along without the slightest hint of drama or suspense as Frank vows to reassemble the original flight team from his aborted '58 mission and Gerson, all but twirling an invisible Snidely Whiplash mustache, schemes to stop him. I wanted to jump into the film and throttle someone, screaming, "For Christ's sake, we know you guys are going into space. Get on with it!"

In fairness, Eastwood's scenes with Jones have the easygoing, laconic energy you'd expect. Frank and "Hawk" Hawkins, his onetime copilot, are exactly the kind of intensely competitive grown-up American boys, weaned on the traditions of football and the military that these actors understand by instinct. Sutherland's Jerry O'Neill, the flight engineer, is a broad but enjoyable caricature of an aging Lothario, oozing the actor's unctuous charm. When the foursome become media celebrities, Jerry turns up beaming on "The Tonight Show," telling Jay Leno that his secret is all about women's willingness "to explore their infinite supply of orgasms." Although I've always liked Garner, the script gives him little to do and he rapidly becomes part of the background.

With her peculiar, almost masculine good looks, Harden always makes a striking impression, and Sara briefly moves into the forefront when she mysteriously becomes Hawk's lover before retreating again to a more functional supporting role. "Space Cowboys" is full of stops and starts like that; it'll generate an amusing gag or a romantic subplot or a brief patch of dramatic momentum, and then its attention flags and we're off to admire the next cool piece of hardware. When our boys finally grapple with the Russian satellite and its not-so-hidden secrets, we get 15 minutes or so of decent adventure that seem to have nothing to do with the rest of the film. (As weak as it is, though, "Space Cowboys" isn't half as dumb as "Mission to Mars.")

If "Space Cowboys" had a central idea, it might have to do with mortality; our four heroes keep inquiring about old friends and ex-wives and finding out they're dead. Through an egregious plot trick, we even find out which of the foursome won't be returning from space before they launch. But this film isn't serious enough for the somber mood Eastwood employed effectively in "Unforgiven," a vastly superior exploration of his own mortality as a star and filmmaker. And although his intentions are good, he simply isn't capable of the wry, wistful blend of humor and sadness this story desperately needs.