In Phoenix, Tom Liddy is running for office. Anne Kleindienst isn't. Too bad for us. 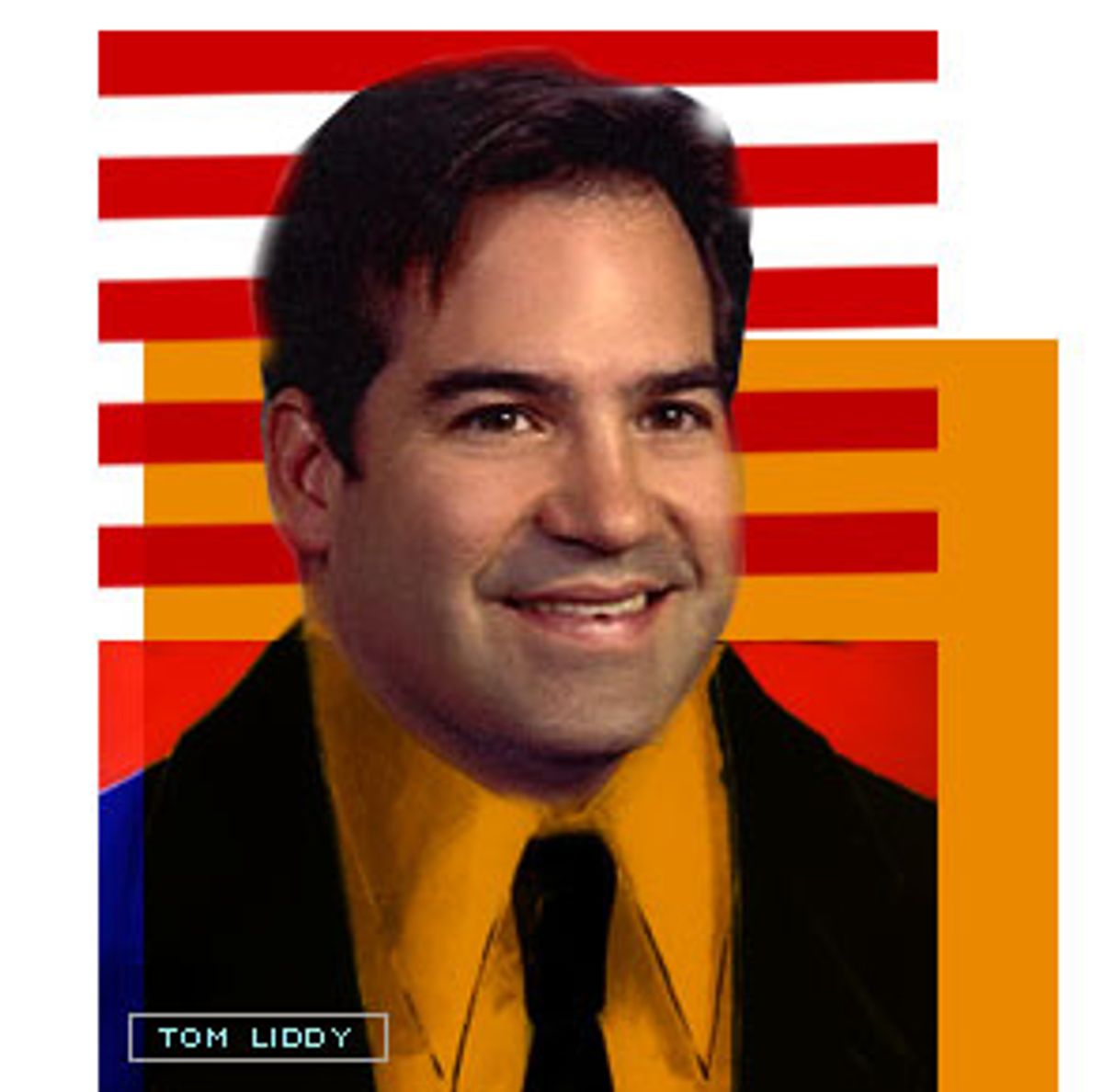 I am a child of Watergate, but only in the most obvious sense, which is to say that I was a child at the time. I was 5 years old the summer of the break-in, and my only political memory is the John Lindsay for President bumper sticker my mom stuck on a box in the garage. Someone had ripped the other one off the back of our station wagon.

In our family, it was more than OK to take unpopular political positions. My mother is descended from socialists and I picked up the cue, which made me a lonely child growing up in Phoenix, a place where government is a dirty word and even Democrats are armed. I spent many solitary summer afternoons in the '80s licking envelopes for losers in empty campaign headquarters. Mom was so proud.

There was never any question in our house about Watergate: bad. Very bad. And the scandal definitely had an impact on me. But it was nothing stars and stripesy, nothing like seeing the movie "All The President's Men" and deciding to become a journalist. To be honest, I decided to be a reporter after Meg Ryan moved to New York to go to journalism school in "When Harry Met Sally." Looked like fun, so I did the same thing.

It's more that Watergate became my baseline for evil. My mom wouldn't let me see scary movies as a child so Richard Nixon was my Freddy Krueger. This point of view worked fine for years -- it was, for instance, a perfectly acceptable opinion for an adult living on the Upper West Side of Manhattan. But when I moved back to Phoenix a few years ago, I realized much of the world had bought into some revisionist account of the Nixon era. Suddenly, the guy was OK.

Nowhere was this new spin so celebrated as my native state. Arizona had become like some sort of Argentina for Watergate-era figures from both sides of the aisle. One of the lawyers for the Committee to Re-Elect the President lives here, as does a special prosecutor from the Department of Justice. The guy whose desk at the Democratic National Committee was rifled practices law in Phoenix. Richard Kleindienst, Nixon's attorney general, lived a couple of hours north of Phoenix until he died in February. Even G. Gordon Liddy, the freaky, flesh-burning, Limbaugh wannabe who started the whole Watergate mess in the first place, has a home in Scottsdale.

Mostly coincidence, I'm sure, but this place has always attracted Do-Overs, people who leave their families and their pasts to start again on the strip-malled frontier. Arizona attracts libertarians too, more than just conservative Republicans. Don't particuarly care for the laws of the land? In Arizona, there's always a way around 'em.

All of which makes Phoenix a great place to be a crooked politician or a political reporter.

Being a political reporter here has forced me to broaden my horizons. I can honestly say that I have friends who are Republicans. And after our last governor, Fife Symington, was convicted of bank fraud and left politics to become a chef (in a fancy restaurant, not prison -- he's dodged that bullet so far), I thought nothing could faze me.

Then came Tom Liddy. Yes, that Liddy, the son of G. Gordon. He announced his candidacy for Congress earlier this year in the state's 1st District, a seat once held by John McCain and, earlier, by then-House Majority Leader John Rhodes, the guy who once upon a time broke the news to Nixon that he didn't have the votes in the House to survive impeachment.

It must be a joke, I thought. I mean, guys run for office using daddy's name all the time -- just look at George W. and Al Jr. -- but using the name Liddy? G. Gordon Liddy sells "Stacked and Packed" calendars (scantily clad women holding guns) on his Web site. He bragged in his autobiography of eating rats as a child to test his endurance. He offered to kill Jack Anderson!

That kind of thing may sell on AM radio, but does it qualify his son to hold a seat in Congress?

Tom Liddy thinks so. He has no real credentials, other than the family name. At 38, he's pretty green, a lawyer with a few years experience at the Republican National Committee and some time in the Marine Corps. He's lived in the district less than a year.

The bizarre part? Tom Liddy just might win. The 1st District includes parts of southeastern metropolitan Phoenix, a conservative district with a lot of Mormons and a smattering of seniors, the kind of folks who live in trailers and shoot endangered species for sport.

I had to meet him.

Turns out, he's really nice. Unlike his dad, Tom's got a full head of hair and a little bit of a paunch. He's sweet. (Like his mom, friends and family told me.) We sat down at a coffee shop near his campaign headquarters and Tom told me all about what it was like to grow up as the son of G. Gordon Liddy. There was no rat eating. But there were lean times while dad was away at prison. (He served almost five years -- longer than any other Watergate figure.)

Tom was 10 when his dad left. The junior Liddy recalls that for Christmases before his departure, G. Gordon had put radishes out for the reindeer and made sooty Santa footprints on the carpet to fool the kids. Christmas changed a lot when he went to prison, Tom told me.

"What I remember about my dad being in prison wasn't what I didn't get. What I remember is my mom crying. My oldest sister would have to stay up and wrap the presents because my mom couldn't do it alone and we didn't have any money, and one year my mom sat down and explained to us -- she put five kids on the couch -- that Christmas is really about Jesus Christ.

"It's about God loving us ..." At this point Tom stopped, sobbing, unable to continue for a long time. "... and it's about how we have to love each other and treat each other well. She told us we weren't going to have a Christmas. And that was tough. As a parent, it's tough to think of your mom doing that. We were like, 'Mom, don't be ridiculous. We don't care about presents.' We gave her a hug."

I looked around the coffee shop, embarrassed. Should I do something? Get the guy a Kleenex? Call his mom? He was on the verge of hysterics. But I soon got used to it. Tom Liddy cried several times while I was with him, during one-on-one interviews and in speeches before dozens of people. He cried so much I started to wonder if maybe we should send the guy to therapy rather than Washington.

Tom didn't answer that one. And here's the answer I got when I asked, "Was what your father did wrong?"

"Wrong? Wrong deals with morality. It was illegal, I would say. Clearly, it was illegal ... Knowing what I know now, I probably would have handled things differently. But I think it's unfair, not just to my dad but to everyone involved, to prejudge. I don't know what my dad knew at the time, and certainly the country was in a completely different situation, in the middle of the Cold War, with the riots and all that sort of stuff. I just feel that it's not appropriate for a son to judge his father."

Nor did I get a satisfactory answer to the question "Why, after you've endured so much trauma in the public spotlight -- trauma still evident in frequent emotional outbursts -- are you out there seeking it?"

Liddy just kept saying that he feels obliged to serve, that he knows what it means to suffer financially (from the days Dad was locked up) and therefore wants to lower taxes. And protect the Second Amendment, of course. His supporters think he'll make a great congressman because, as one told me, he'll have name recognition like Sonny Bono did when he got elected.

And he has a lot of supporters. He may not win the September primary (it's a tight race with five Republicans competing), but he'll probably come close. I went to a fundraiser at G. Gordon's home (a surreal event, the house decorated wall-to-wall with Watergate memorabilia and firearms) and there, amid the AM radio junkies, were quite a few members of the Phoenix establishment. Friends of my parents! Elected officials! All of them admiring the Watergate Hotel ashtray and the lamp made of bayonets and a shotgun, and paying to have their photos taken with G. Gordon Liddy.

I went home and called my mother. "Oh no, hon, you're not crazy. Watergate was bad. Very bad," she told me.

That didn't help much, so I called Anne Kleindienst.

Anne is another honest-to-goodness child of Watergate, the daughter of Richard Kleindienst, who had the bad luck of taking a job as Nixon's attorney general five days before the bungled Watergate break-in. Like Tom Liddy, the younger Kleindienst (she's practiced corporate law in Phoenix for years) was deeply affected by Watergate. She was in college at the time, old enough to really see her father suffer, even though he was never charged with a crime.

Unlike Tom Liddy, Anne Kleindienst doesn't celebrate the event. And unlike the Liddys, the Kleindiensts never made peace with Nixon. Richard Kleindienst wanted to call his memoir, "Mr. President, You're Wrong." (The publisher said no, so Kleindienst called it "Justice")

I told Anne that Tom Liddy was running for office using his father's name, with the promise he'd make our lives better than his had been when his dad was in jail. Her eyes got big but all she'd say was that since she doesn't live in Liddy's district, she doesn't have to worry about picking a candidate.

To this day, people still hear her name and ask about her relationship to Watergate. She doesn't like it, but it's a part of life. She's 46, happily married and involved in local Republican politics, although she says she'd never run for office. Years ago, someone asked her to consider it, and she did, but ultimately decided against it.

"I felt that I had already sacrificed enough of my personal life and I didn't want to take any chances that I would sacrifice any more," Kleindienst said.

I went home and called my mom. Good for her, we decided. And too bad for the rest of us.

Amy Silverman is a staff writer for Phoenix New Times.