Do not pass Go

Are the Philadelphia police using high bail to keep an activist leader away from the Democratic Convention? 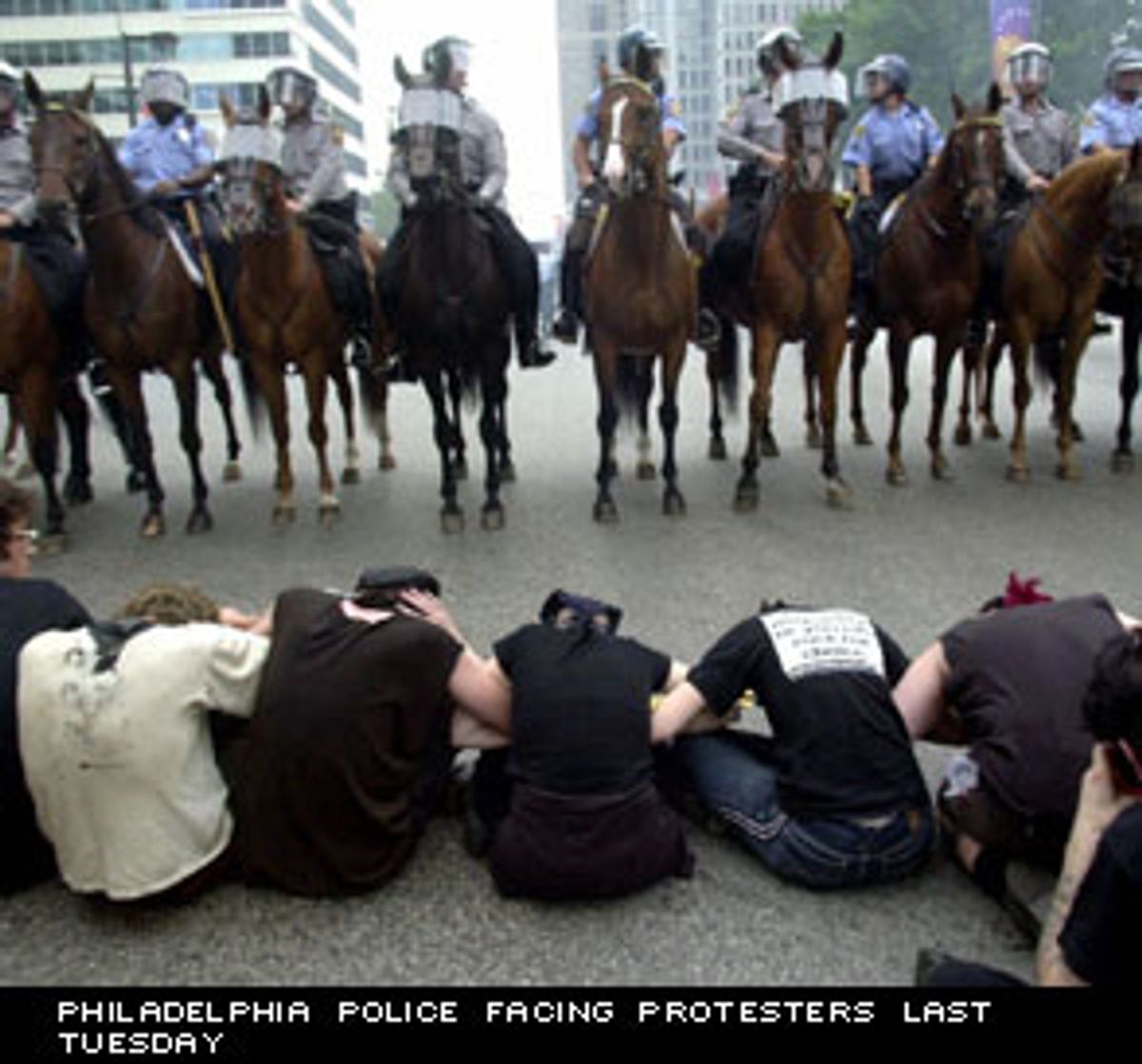 Last week in Philadelphia, San Francisco Bay Area activist John Sellers, director of the Ruckus Society, in Berkeley, Calif., was arrested on a series of misdemeanor charges including conspiracy and reckless endangerment. Bail for Sellers was set at $1 million. Activists and civil rights groups have decried the bail as astronomical. They claim that Sellers was picked out by police before the protests even began and is guilty of no crime.

More than 300 people were arrested last Tuesday alone during traffic-stopping demonstrations and sometimes violent conflicts with police. Officers say they confiscated piano wire and gasoline-soaked rags tied to chains, which they believe protesters planned to use to injure them. Meanwhile, jailed activists have complained of abuse, including long periods of time without food, water, bathroom breaks or medical attention. There are 325 still in jail along with Sellers.

At a hearing on Monday afternoon, a judge reduced Sellers' bail to $100,000. Three other activists are also being held on high bail bonds ranging from $400,000 to $500,000 on misdemeanor charges. The judge rejected bail reductions for them during Monday's hearing.

Bail is designed to make sure defendants show up for trial. But civil liberties lawyers say Philadelphia authorities are using the high bail illegally as a tool to punish civil disobedience and to prevent the activists from attending the Democratic National Convention in Los Angeles, which begins Aug. 14.

Ever since mass protests in Seattle last November shut down the World Trade Organization conference and prompted embarrassing police retaliation, law enforcement across the country has been nervous about the potential of activists to shake things up. Philadelphia Police Commissioner John Timoney recently called for a federal investigation into groups such as the Ruckus Society that demonstrate in major cities' streets during high profile conferences.

"There's a cadre, if you will," Timoney said Friday, "of criminal conspirators who are about the business of planning conspiracies to go in and cause mayhem and cause property damage." According to Timoney, Sellers is one of those people.

Critics of the police say Sellers isn't a conspiratorial mastermind. As director of Ruckus, he is simply one of many involved in the unprecedented cooperation between environmentalists, labor groups and other activists.

But interest in the Ruckus Society grew after the broadly organized WTO protests in Seattle. In addition, the group's Ruckus Camps -- which teach activists how to harness themselves to billboards, scale skyscrapers or form police-resistant human chains -- have received attention from activists, media outlets and law enforcement.

Founded in 1995 as a group to teach demonstration techniques to environmental groups such as Earth First! and the Rainforest Action Network, Ruckus has evolved into perhaps the best known group among protesters calling for a reduction in corporate influence in government.

What do you think of the $1 million bail set for John Sellers?

It does seem pretty outrageous. One million bucks and he's being held on eight misdemeanors.

They're claiming that he shackled himself to a trash can, and all of these things that are just absolutely false. He has alibis for all day, every day that they accuse him of doing something illegal. Most of those alibis are his mom and a bunch of reporters whom he has been talking to. He spent the better part of Sunday and Monday with his mom. Monday and Tuesday he was with reporters with whom he had a rapport.

The police say that he was in the middle of the crowd Tuesday smashing things. Those charges are just false. They don't have any substance. When he was arrested he had a cellphone and a Palm Pilot on him. They're trying to show that he was behind the scenes as the puppet master, that he was the wizard behind the curtain telling people what to do via cellphone. They want to hold him responsible for everything that happened Tuesday. It's very troubling.

Has this made you or other people who have high-profile roles in the protest movement nervous?

Yeah, honestly. I'm not nervous because I've done anything wrong, I'm just worried about a misperception around Ruckus. A lot of that has been fostered by some of the powers that be in Los Angeles. I think John fell victim to Ruckus' popularity. There's a total misperception about us and our tactics. And there's definitely a misperception about how much we're responsible for as far as the strength of this new movement. I'm proud of this Ruckus family and all these people we consider to be in the Ruckus nexus, but this movement is a lot bigger than Ruckus. We're just identified so closely with these mass protests. Quite frankly, we're getting more credit than we deserve.

Is this simply an effort to keep John and other protesters off the streets in Los Angeles?

In the short term, I think that's the first goal. I believe they're trying to intimidate and scare us. They're sending a message that perceived organizers will be dealt with harshly.

There's only two gratifying points to this as far as I'm concerned. These actions belie a fear of a burgeoning strength of the movement suspicious of corporate influence over government. They're afraid of our ability to embarrass them. We embarrassed the IMF and WTO. Sure, we embarrassed ourselves in the process sometimes, too. But singling out John belies the authorities' fundamental misunderstanding of how this thing is going. If they think they can take out a couple of people and kill it -- just cut the head off and watch the body die -- they're misinformed.

How do you think Ruckus became a target for the Philadelphia police?

We cosponsored a training with the Philadelphia Direct Action Group and Philly ACT UP and the Kensington Welfare Rights Union. We had some trainers at it and helped to form the curriculum and give some input to it. I know the cops were there. We intentionally opened the training to the public. They said they infiltrated the training, but it's impossible to infiltrate a public venue. We invite the press to our action camps, we try to do things out in the open. We try to conspire in public. We try to do it all under the light of public scrutiny. It seems pretty clear that we're not going to win our case in a court of law, so we'd rather try our case in the court of public opinion.

We practice civil disobedience. We talk about nonviolent direct action practiced by heroes like Gandhi and King, people who we have streets named after in every major American city. They practiced civil disobedience and direct action, just as every movement for social change has. This is a grand American tradition. What we're doing is standing up as people of conscience against a system that is prioritizing corporate profits over everything else.

That is just as much of a human rights violation as "separate but equal" was. So again, they may think they have a case, but we're going to try our case in a different venue than they are. Our credibility depends on our honesty.

But by holding activists in jail, the Philadelphia police seem to have handed protesters an issue heading into Los Angeles.

It could also be a very distracting rallying cry. Certainly this has long-term ramifications. There are bigger picture things at stake than just "Free John Sellers." We don't want it to turn into cops vs. protesters as it always does or even some fight over the First Amendment. We'd much rather the protests stay focused on the corporate takeover of our democracy and a system of government that is prioritizing profits over people. That's what we want to focus on.

That being said, I don't disagree that they've given us an issue. It raises some questions about our strength or potential as a movement.

How is John holding up?

I think he's doing all right. Essentially he's asked us to gather funds to bail him. There's a bail reduction hearing set for Monday and he's asked us to be prepared to bail him out. He's not being brutalized or anything. Frankly, I think they know better than to do that with John. He's been isolated from the other activists and general population, which may be a good thing for him.