Is your cellphone killing you?

A neurologist who's dying of a brain tumor is suing to try to prove that his phone is responsible. 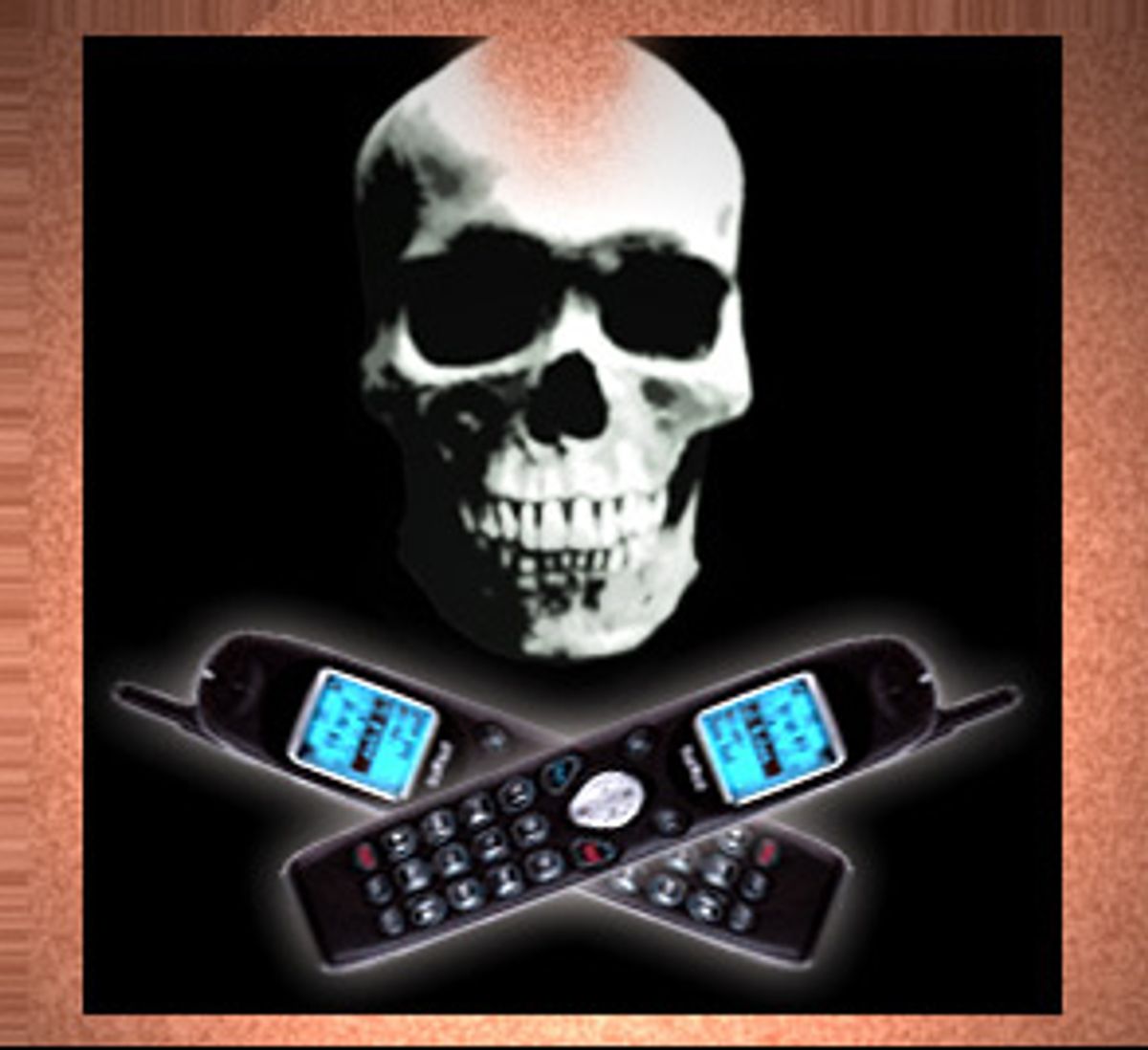 It may be time to use your beloved cellphone less. Or even -- don't shoot the messenger, please -- to give it up. If Dr. Christopher Newman has his way, the whole world will begin to associate these convenience gadgets with a deadly disease.

Last week, the Maryland neurologist filed a suit, alleging that his hours of remote chatting caused the brain tumor that is killing him. He is accusing the industry of knowing that radio frequency radiation from the phones was dangerous, and of misleading him into believing it was safe. Newman is demanding $800 million from seven cell phone manufacturers and cellular service providers and two industry associations. "The public has been grossly under-informed and misinformed regarding the biological risks associated with wireless phone usage," the complaint says.

A spokesman for one of the trade-association defendants, the Cellular Telecommunication Industry Association (CTIA), declined to comment on Newman's suit. But health questions have nagged at users of the ubiquitous communication devices for years, and there's been talk that lawyers are licking their chops at the thought of doing to the mobile phone industry what was done to the tobacco industry. On Aug. 2, ComputerWorld reported that cellphones have attracted the attention of the class-action bar, notably Peter Angelos. Super-lawyer Angelos, owner of the Baltimore Orioles, helped Maryland in its tobacco lawsuit. Angelos' office says there are no present plans for suing anybody, but he's keeping an eye on the cellphone issue. The Newman suit was filed in Baltimore, although not by Angelos' law firm.

And what is the startling new evidence that cellphones cause brain tumors, or anything else nasty? There isn't any, really, just an increasing unease. A Swedish study published in May reported a borderline statistical association between cellphone use and a twofold increased risk for tumors in the brain region nearest the phone. But the study was small. It is still the case, as industry and government agencies have said for years, that "present scientific information does not indicate the need for any special precautions for use of mobile phones."

That's what the World Health Organization said in June. Yet in the same breath the WHO advised, "If individuals are concerned, they might choose to limit their own or their children's exposure by limiting the length of calls, or using 'hands-free' devices to keep mobile phones away from the head and body."

Why so equivocal? Because out of some 200 safety studies to date, there have been a few (like the Swedish one) with mildly troubling findings. Now that so many people are using cellphones, the stakes are higher. An estimated 100 million Americans and 400 million folks elsewhere use them, and the industry forecasts 1.6 billion users worldwide by 2005. "We now have large populations exposed to low levels of radio frequency," notes Gregory Lotz of the U.S. National Institute for Occupational Safety and Heath. It is a gigantic experiment, by far the largest ever carried out on human subjects. Before long, Lotz points out, pretty much everyone will be exposed to radiation through wireless communication. If there is a risk, even a tiny one, thousands and thousands of people will be affected.

Moreover, there is almost no data on long-term exposure. Exposure is already so pervasive, and has gone on long enough, that the WHO itself has been able to put together a 10-country epidemiological study to look for possible links between the radio frequency fields (RF) generated by mobile phones and head and neck cancers. The study group will comprise thousands of people, many of whom will have been users for years. That's large enough, the agency says, to detect a relationship if there is one. The research, however, will not be finished until 2003.

"All the information we have to date shows no adverse health effects from the use of mobile phones," says the WHO's Michael Repacholi. "However, most studies have examined the results of whole body exposure to RF fields at levels far higher than those normally associated with wireless communications. With the advent of such devices as walkie-talkies and mobile phones, it has become apparent that few studies address the consequences of localized exposures to RF fields to the head."

The issue is whether the radiation cellphones emit can injure human tissue, because they are snuggled up against the ear, just millimeters away from brain tissue. The electromagnetic spectrum includes all sorts of radiation, from cosmic rays to visible light. Ionizing radiation busts up molecules and can definitely damage DNA, causing cancer and birth defects. Ionizing radiation is, in fact, the only well-established cause of brain tumors. X-rays are an example of this, but we tolerate the (small) risks for the sake of the benefits -- and we wear lead aprons (we do, don't we?) to reduce them further.

The radiation from cellphones, however, is non-ionizing and is not believed to harm DNA. It is microwave radiation. Yes, the same stuff you use for nuking leftovers. Only it is too low-level, it is said, to produce significant heating that could harm tissue. This low radiation can, however, generate minute electrical currents in cells -- too minute, probably, to be injurious. Probably.

A British government commission warned in May that children should use mobile phones only when necessary. If there is risk -- this group, too, said the evidence was lacking -- children are thought to be the most vulnerable group because their cells are dividing rapidly as they grow. Restrictions like this would be a huge blow to the cellular industry. The market continues to expand rapidly, but in no group more rapidly than among children.

A major blow to the industry's claims of safety occurred in 1999, when George Carlo -- long labeled as the "industry's boy" by cellphone critics -- began to confess uneasiness about cellphone safety. Since 1993, Carlo had headed the Wireless Technology Research program, a $27 million effort to study health effects of the phones, which was funded by the cellular industry. During most of that time, he was known as an unwavering proponent of the industry's view that cellphones were nothing to worry about. But a few of his group's studies did not wholly support that position.

Carlo says he reported his worrisome findings at an industry meeting in February 1999 and urged that they be followed up with further research, but was rebuffed. In October he wrote to the heads of 26 wireless communications companies that supported WTR, urging the same course. He told his bosses (former bosses by that time): "Alarmingly, indications are that some segments of the industry have ignored the scientific findings suggesting potential health effects, have repeatedly and falsely claimed that wireless phones are safe for all consumers including children, and have created an illusion of responsible follow up by calling for and supporting more research."

Carlo's apostasy, it has been suggested, was motivated by the industry's disinclination to continue his funding. This, of course, he denies. CTIA, the industry group, has just begun funding a collaboration with the Food and Drug Administration to investigate health issues.

CTIA said last year it wasn't quite sure why Carlo broke ranks, but also said his findings should not be used to guide policy until they had been published and subjected to the scrutiny of scientists. Carlo did finally publish July 31 in a new online journal, Medscape General Medicine.

The paper makes clear how frustratingly ambiguous this research can be. One WTR study failed to demonstrate that radio frequency radiation can break DNA, but another found that such radiation can cause genetic changes in blood. In one epidemiological study, brain cancer mortality was more than three times higher in users of car cellphones, which have car-mounted antennas, than in users of hand-held devices. In another, people who had used cellular phones for more than six years had an increased risk of a rare acoustic-nerve tumor. After reviewing dozens of studies, his own and others, Carlo and his coauthor concluded, "The legitimate questions about safety that have arisen from recent studies make claims of absolute safety no longer supportable." The authors emphasized that the findings are not conclusive, but they also recommended certain precautions to reduce exposure to radiation, such as using headsets or a hands-free phone or by substituting two-way pagers for cellphones.

Luckily for the worried well who don't want to give up being pacesetters, headsets are a must-have fashion item. Especially earbuds, with their disconcerting dangling wires and their gift for convincing the clueless passerby that "phonies" are just your basic wackos, muttering to themselves. Carlo says he wears them himself.

They are part of the new industry of protective -- perhaps -- devices spawned by cellphone paranoia. In addition to earbuds, there are shields that claim to guard against the depredations, if any, of cellphone radiation. Does this stuff work? Who knows?

Just this week the U.K.'s Department of Trade and Industry released a study claiming that hands-free sets are safer than holding a phone against one's ear. This contradicts the findings of another Brit group, the Consumers' Association, which four months ago said that the cables of some hands-free kits actually focused radiation on the brain, increasing it by up to 300 percent. The consumer group harumphs that the new study is "not necessarily definitive." Big help.

In the U.S., Consumers Union says it has no plans to test protective devices. Its in-depth coverage of cellphones, published in February in Consumer Reports, had almost nothing to say about safety except that "a headset reduces contact between the phone's antenna and your ear, which might allay health and safety worries you may have." On the other hand, it might not.

As for shields, they've never been evaluated dispassionately. "Moving the antenna beyond the distance threshold of two to three inches away from the body is the only science-based recommendation that can be supported by existing data," Carlo and his coauthor conclude.

In July, the CTIA announced that its member manufacturers would begin disclosing the "specific absorption rate," or SAR, a measurement of the amount of radio frequency radiation absorbed by the body while using a mobile phone. Will knowing the SAR help you pick the safest phone? Like everything else about cellphone safety, that's in dispute.

Even if SAR ratings turn out to be beneficial, good luck with unearthing that number. The manufacturers will apparently not print it on the outside of their boxes, where it would help you comparison-shop. Instead, the rating might be on a slip of paper inside the box. Or it might only be available by consulting the Federal Communications Commission Web site. They're still arguing about it.

It will be years before the dust settles. What to do until then? Weaning yourself from cellphones seems to be a good idea, especially if you're pregnant or a kid. There are other ways to keep in touch; use them. If you simply must do cellular, switch to hands-free, but don't count on it too much.

And for God's sake, don't make or take calls while driving. The one health risk on which everyone seems to agree is that using a cellphone on the road -- even hands-free -- significantly raises your risk of an accident.