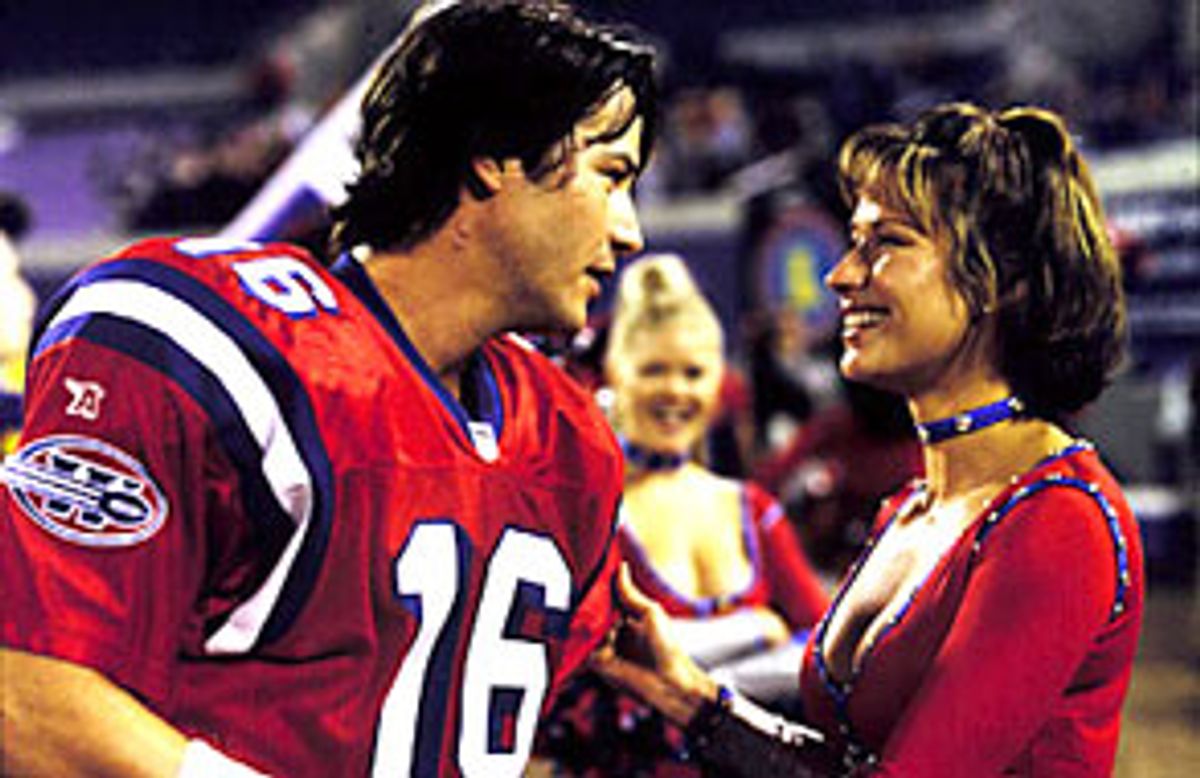 I want the world to know that I saw "The Replacements." All of it, beginning to end. Every pop-song montage, every outlandishly exaggerated football action sequence, every close-up of a fat guy's naked stomach and a cheerleader's tightly packaged tits, every lovingly rendered vomit take. I even laughed out loud during the jailhouse dance number set to "I Will Survive," which hit the level of a moderately funny TV commercial. I won't apologize; I was a broken man.

What choice did I have? Yes, it's true that I get paid to write these reviews (to the endless amazement of some of you), but by the one-hour mark I would gladly have paid as much as I'll earn for this review, if not more, just to get out of there. I tried a catatonic stupor for a while, but the egregious score -- in an MOR rock style I didn't think existed anymore -- snapped me out of it. (Actually, I kind of liked one song on the soundtrack. It turned out to be by the 88-year-old Rolling Stones, which will tell you what this movie did to my powers of discernment.)

Failing to find any cockroaches to train or squashed Jujubes to play with under my seat, I began to pose myself conundrums to pass the time. What in the name of all that's holy is Keanu Reeves -- fresh from "The Matrix," the biggest commercial success of his career -- doing in this humiliating sports comedy, which is sort of but not really based on the National Football League players strike of 1987? Has he been brainwashed or replaced by a replicant? (In the latter case, the movie's title assumes a sinister Philip K. Dick significance.) Do the producers of "The Replacements" have photos featuring Reeves, Madeleine Albright and a frisky fox terrier named Archibald? Were no better parts available? In the category of better parts, by the way, I would include the heartthrob title role in "Slobodan Milosevic in Love" and the villainous dance-hall mastermind in the long-awaited sequel to "Lambada: The Forbidden Dance."

There are only two kinds of sports movies: One is "The Bad News Bears" and the other is, well, something else, generally full of autumnal masculine sadness, like "Pride of the Yankees" or last year's execrable "For Love of the Game." "The Replacements" is the first kind, a smugly heartwarming little fable about a bunch of sad sacks molded by adversity into winners. By turns crudely offensive and cloyingly sentimental, "The Replacements" is also reactionary and hypocritical, playing shamelessly to public resentment of both star athletes and organized labor.

I believe this represents a new low in the career of director Howard Deutch, a one-time John Hughes protigi who peaked with "Pretty in Pink," his very first film, and more recently found his tepid level with "Grumpier Old Men" and "The Odd Couple II." Even by the sloppy standards of the sports-farce genre, "The Replacements" sucks igneous rock. It has the labored, clueless feeling of a film directed by a small child, or perhaps an intelligent but mean-spirited parakeet. By comparison, Adam Sandler's "The Waterboy" is erudite wit worthy of Oscar Wilde; I think we're somewhere down around the level of "Ladybugs," in which Rodney Dangerfield coaches a girls' soccer team.

Sports fans will remember the real NFL strike and the league's use of semipro or washed-out replacement players as perhaps the most bizarre event in pro football's checkered history. Dealt with honestly, it could have made a fascinating movie. For some of the substitutes, the chance to play in the NFL was indeed the storybook fulfillment of a dream, even in such dubious circumstances. But for the league as a whole, along with the media and the vast majority of fans, the replacement games were gruesome and amateurish spectacles that were best avoided and rapidly forgotten. (Eventually the real players broke down and began crossing picket lines; it remains the only time in modern sports history when league owners have conclusively defeated a players union.)

Vince McKewin's screenplay for "The Replacements" deals with none of these complexities. Instead we get a study in stock villainy and heroism: The striking players are depicted as sneering, arrogant assholes consumed by unreasoning greed, while the replacements are lovable Everymen who play with fire and heart and soul and every other sports clichi you can imagine. Needless to say, the cruel brevity of a football player's career is never mentioned, nor is the fact that these players make significantly less than their peers in baseball or basketball and rarely receive guaranteed contracts. It's not my job to defend the inflated salaries of contemporary sports, but why don't right-wing creeps on talk radio bitch about, say, Keanu Reeves, who will earn more from this movie alone than any NFL player makes in a year? It strikes me that athletes and movie actors are in the same business, and the money they make, for better or worse, reflects the governing values of our society.

Somehow I'm not horrified by the way Gene Hackman sails through his role here as Jimmy McGinty, "that old coach from the '80s," as Reeves' character, quarterback Shane Falco, puts it. (McGinty's Bear Bryant wardrobe is more like the '50s, but never mind.) Hackman long ago became the American answer to Michael Caine, a fine actor who can survive the crappiest movies imaginable with his professionalism more or less unscathed.

As Falco's comment suggests, it's not 1987 but some nonspecific version of the present, and Mr. O'Neil (Jack Warden), owner of the Washington Sentinels, has hired McGinty to assemble a team of scum-sucking scabs. Sorry, I mean plucky hard-hat American dreamers who stand as examples to us all.

In addition to Falco, a one-time college star who flamed out after losing a bowl game, McGinty gathers a predictable cast of goofballs: a maniacal SWAT-team jar head (Jon Favreau), a too-smooth wide receiver (Orlando Jones, from those 7-Up commercials), a pair of enormous hip-hop bodyguards (Faizon Love and Michael Taliferro), a sumo wrestler (Fumiko), a chain-smoking Welsh soccer player (Rhys Ifans). Jones has undeniable charisma and the puckish Ifans gets off some zingers, but they're all stuck in McKewin's staggeringly lame screenplay. "Winners always want the ball when the game is on the line," McGinty barks. "You're the first player I can remember who cares more about his teammates than about himself," coos head cheerleader Annabelle (Brooke Langton) as she rubs wild yam extract into Falco's bruises.

Reeves seems to be blissfully asleep throughout his harmless performance (rather like Neo while encased in the Matrix), and for his sake I hope he really was. Every time he and Annabelle lock eyes, the movie stops dead -- in many ways a blessing -- and we get one of those throbbing, high-emotion musical numbers that sound exactly like "The Time of My Life." Just another two minutes closer to the end, I kept telling myself.

For some reason, Annabelle begins auditioning a lot of funny-looking replacement cheerleaders. This of course makes no sense -- since when do cheerleaders, who are usually low-paid independent contractors, have a union? -- and the movie doesn't even try to explain it. But then, who needs an excuse to make fun of fat chicks? Annabelle ends up hiring a bunch of strippers as the team's new support squad, and strippers apparently differ from fat chicks in the following way: Fat chicks are funny; strippers are hot.

Do you really need to know the plot? OK, here goes: They feud, they lose, they feud. They bond, they win. Repeat. The extensive football action scenes will bore nonfans to tears and amuse aficionados with their lameness. Real-life NFL commentators John Madden and Pat Summerall come off like dolts and I hope they're thoroughly ashamed of themselves. Keanu gets girl, loses girl. Repeat. Sad. Happy. Sad-happy. Happy-sad.

OK, "The Replacements" is grossly sexist, poorly made and appeals to the basest and most juvenile instincts of its audience. So what, right? It's just a movie. I wouldn't hate it so much if it didn't insist that it was meaningful and embodied the kinds of bogus lessons about glory and honor that only specious entertainment can manage. "Their lives were changed," Hackman intones after one replacements victory, "because they had been part of something great." Indeed. They had been part of the worst movie of the new millennium so far. It's not a distinction that will last long, maybe, but it's something.