Does Half-Life make you sick? Well, you're not alone. Plenty of gamers suffer from simulation sickness. 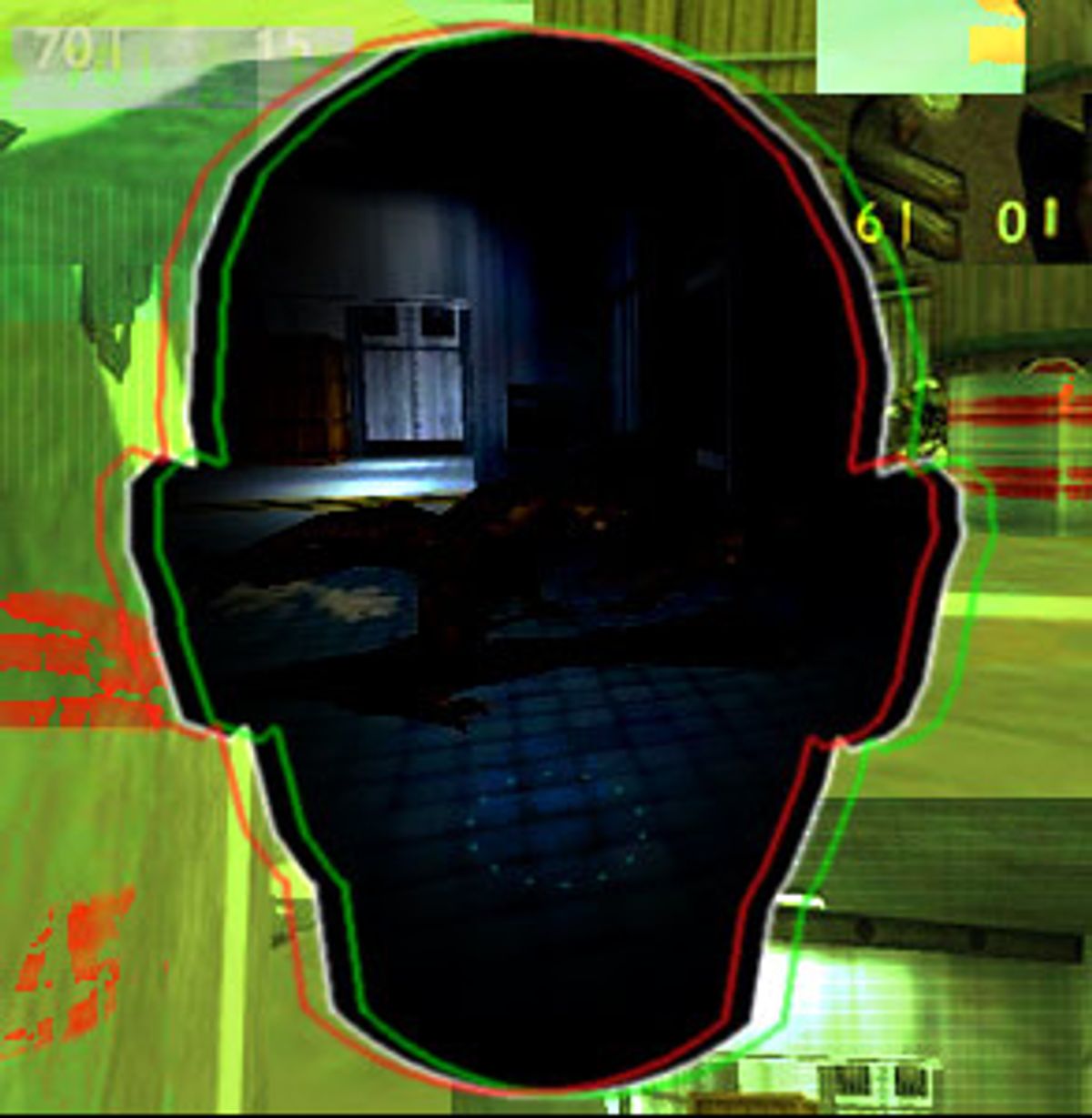 It takes only a few minutes for Tony Lastowka to get queasy: "I'll start to feel nauseous and jittery. Then I get hot flashes and my vision gets hazy," he says. "At this point, I throw up."

The 21-year-old systems administrator in Philadelphia isn't talking about an allergic reaction or the aftermath of a wild night of drinking. Nope, this is his thanks for creeping around abandoned missile silos and evading ruthless assassins in Half-Life's Black Mesa Federal Research Facility or emerging victorious from a death match in Unreal Tournament. These fast-action games make him sick. Literally.

Paul Tomblin, 39, faces similar problems. A programmer and small-plane pilot, Tomblin overcame the motion sickness that plagued him during flight training, but when he's careening through the virtual terrain of games like Half-Life and Quake III, he still gets nauseous. "Sometimes, after a long session of playing, I have to go lie down -- I definitely feel like I'm going to throw up," he says. "I also get bad headaches and a feeling like my eyeball muscles are tired."

These two men are afflicted with "simulator sickness." Once used to describe the motion sickness that many astronauts experience in flight simulators, the term is now commonly used by gamers whose equilibrium is upset by the realistic graphics in 3-D computer games or other virtual reality environments. The U.S. military has conducted extensive research into "sim sickness" since the 1950s, finding that 60 percent of military pilots using a flight simulator suffered at least one symptom. But as yet, there are no similar figures quantifying the number of affected gamers, and scant formal research about sim sickness and gaming.

The topic does pop up periodically on gaming sites and message boards like Slashdot.

Yet, oddly, sim sickness is rarely acknowledged by game makers, much less addressed in gaming technology. As Steve Polge, a programmer for Epic Games, which made the Unreal titles, admits: "I don't think it's a focus of game development [throughout the industry]. When play testers complain of simulator sickness, we try to address it if we understand how to alleviate the problem, but it's not an issue we spend a lot of time on."

Maybe they should. It "really is a problem," says Henry Duh, a research associate at the University of Washington's Human Interface Technology Lab (HIT Lab) and one of the few researchers looking into the effects of sim sickness on gamers. Most of the lab's work focuses on virtual reality environments that involve the user wearing a head-mounted display, but the HIT Lab is also studying computer technology that creates realistic-looking, 3-D graphic worlds -- similar to what most of the latest video games do.

Duh's group is looking into the psychological and physiological effects that people experience while being in a virtual 3-D environment. "Currently, we are doing research to answer the following questions: How do people get sick in a virtual environment; what psychological mechanism is behind simulator sickness; and how [can we] alleviate it," he says.

There are several theories about what causes sim sickness. "The well-known and widely accepted one is the 'sensory conflict theory,'" Duh says. "In the simulated 3-D environment, you receive visual information telling you that you are moving. On the other hand, you receive information from your vestibular system [in your inner ear] telling you that you are stationary." The mixed signals confuse your mind, which can't decide if you're really moving or not, and quickly make you dizzy.

Scott Miller, an owner of 3D Realms Entertainment, the makers of the Duke Nukem franchise, did his own research into this matter back in 1992, when his company released Wolfenstein 3-D -- one of the granddaddies of the 3-D action game genre. The conclusion that he drew then was that sim sickness is caused by unrealistic-looking graphics. Thanks to better graphics technology, he says, it's not a big problem these days.

Sim sickness is "not a topic I've heard discussed as an important matter at all," says Miller. "I hear much less about it nowadays than several years ago. I heard about this problem the most when we released Wolfenstein 3-D, and that game had very unrealistic graphics compared to games today. I would guess that graphics realism has a little to do with it."

Maybe. Or maybe most of the people made sick by Wolfenstein 3-D and its many descendants have just quit complaining, or even stopped playing image-rich games. "Better CPUs or video cards can reduce sickness to some degree," Duh says. "However, if the causes are psychological or cognitive, the problem will be there still even using the better hardware."

Indeed, Tomblin, the pilot, says he used to play the original Quake at the office and suffered no ill effects until a fellow employee installed a patch to improve the game's graphics. For Tomblin it was a miserable improvement. Quake appeared "smoother and more 3-D looking, and I very suddenly got very ill and had to quit playing immediately," he says.

Basically, no one knows what causes sim sickness -- and nobody knows how to alleviate its symptoms either. "We don't really understand what can be done to avoid simulator sickness," says Epic Games' Polge. "If we did, we would certainly try to alleviate the effects."

Of course, game developers have proposed a number of solutions, and most are contradictory. Scaling down a game's screen resolution in order to increase the rate at which the monitor refreshes the image seems to help some, including Lastowka. But others find that higher resolution makes them feel better.

Miller thinks a game screen that's large enough to fill out a player's peripheral vision could be a solution, but Duh highly doubts this. "In our experiments, a wide field of view disturbed [subjects' sense of] balance, which is a good, objective measurement of simulator sickness," he says.

In another experiment, HIT Lab researchers found that sim sickness is prevalent when people feel a frequent need to react to the scene they're presented with, regardless of the quality of the graphics. "When you are playing a 3-D driving game, you will get a stronger effect from turning your steering wheel a lot than just driving the car straight," Duh offers as an example. Does that mean the people who suffer from sim sickness would be better off playing games that require less action?

Unfortunately, it's not that simple. "Frankly speaking," says Duh, "there is no good way to reduce simulator sickness."

But one of Duh's colleagues has a more optimistic theory. In his "rest frame hypothesis," Jerrold Prothero states that the human brain processes sensory information to form a mental image, in which we know which objects in our environment are stationary as we physically move through it. Our subconscious perception of these stationary objects helps us maintain a sense of balance. If this internal model is disrupted, simulator sickness can happen.

If Prothero's theory holds true, game makers could help players reduce sim sickness by including a visually noticeable object in a game's environment, which cannot be ignored and which doesn't move on the screen much, if at all. That would explain why games set in a third-person viewpoint, like the Tomb Raider games, as opposed to a first-person shooter don't cause sim sickness as readily. (Who would have thought staring at Lara Croft's butt could be good for your health?)

In the meantime, sim sickness can leave gamers physically debilitated even after they quit playing a game that has superrealistic graphics and intense action. "I have to lie down in a dark room for several hours, or sleep for at least an hour to shake off [the effects]," Lastowka says. "Until I do that, the feeling won't go away. Walking, watching TV or driving will cause it to get worse."

Duh thinks that game developers should learn the basic psychological and physiological effects created by a 3-D graphic environment before drawing the first sketch of a new title. "They should develop the 3-D world based on real human perception -- such as depth perception, motion parallax, etc. I have seen how a 'wrong' 3-D graphic world makes people very sick," he says. "We hope that the game industry will notice this problem during the development of 3-D games because simulator sickness presents a significant problem for a number of users. Though technological causes may diminish with time, those caused by psychological and cognitive factors may not."

As for what gamers who suffer from sim sickness severely can do in the meantime -- well, not much. Even Miller of 3D Realms can only offer this: "People who have this problem can easily avoid playing games that have this effect on them."

But that's hardly a solution for an avid gamer like Lastowka. "The games are too much fun not to play," he says. Like a junkie who knows the risks of his habit to his health, Lastowka has an addiction that's simply too strong to resist. "Even when I'm lying in bed, dreading how much my head hurts, I still want to play."