The adults are psychotic on "Big Brother" and "The Real World," but the kids are all right on "American High." 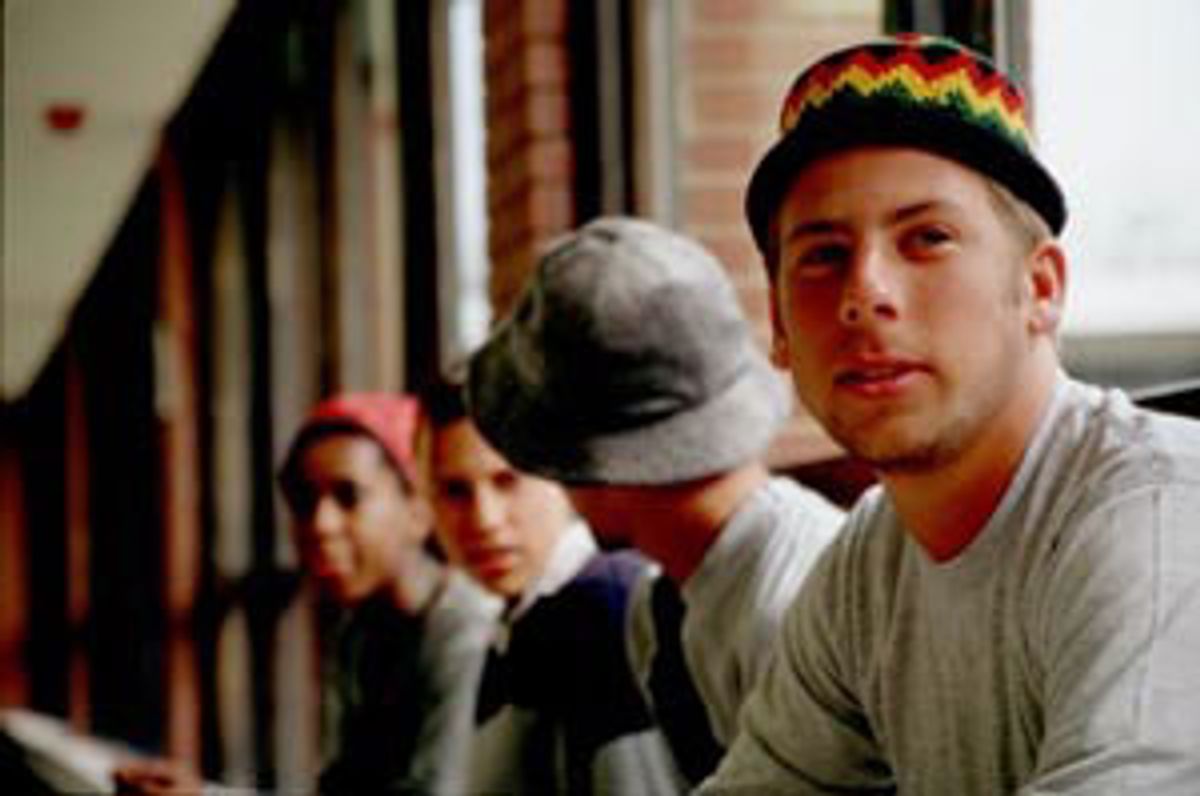 R.J. Cutler, the creator and director of Fox's new "American High," prefers the term "nonfiction drama" to "reality series"; in interviews, he has been quoted as calling CBS's "Big Brother" a "sickness" and knocking down the notion that reality series are voyeuristic: Isn't voyeurism about watching somebody who doesn't know they're being watched?

The kids on "American High" know they're being watched; they signed up to be part of Cutler's documentary project chronicling the 1999-2000 school year at their suburban Chicago high school. As part of the project, they all got to use video cameras to make their own "video diaries," recording the intimate moments Cutler's crew might have missed. Sure, the kids could have tailored some of their behavior for the cameras. But in the end it doesn't matter. These teenagers are talking and we owe it to them to listen, even if some of their own parents aren't.

Since the 1950s, teenagers -- particularly boys -- have been treated like dangerous powder kegs by the adult world, a stereotype that events like the Columbine massacre have done nothing to dispel. But you might be surprised by the boys on "American High." Twinkle-eyed Robby, star jock, describes himself as "having a lot of love in me," and proves it by standing by his best friend, Brad, when the latter reveals he's gay. Outwardly, rambunctious Morgan may strike the teen-phobic as the boy most likely to blow up the school; he flunks his subjects ("F is for fun!"), intimidates his little brother, bangs on drums in the basement with his speed-rap-metal band and calls his parents "pricks." Yet when his father drives him to the doctor for monitoring of his ADD, he sits in the back seat, shaking his head and refusing to get out of the car like a stubborn child. And when he works with mentally challenged kids and adults as a gymnastics instructor, he stuns you with his tender patience and enthusiasm.

As for the girls, wholesome Sarah (Robby's girlfriend) is the absolute embodiment of the pain of first love. She worries that senior Robby will dump her when he goes off to college next fall. ("Robby basically molded me into the person I am. He's the love of my life.") She can't talk to her mom about this stuff because mom works all day and spends most nights at her own boyfriend's house. When it comes to adult attention, Sarah is achingly alone. So is Allie, whose parents are going through a bitter divorce. And so is Kaytee, a wry, bespectacled singer-songwriter who skitters around the edges of school hanging with the freaks; her trippy mother vaguely advises her to, like, not go to college and, like, do something with music or art.

In "American High," Cutler (who produced the Academy Award-nominated documentary "The War Room," about Bill Clinton's presidential campaign) respects the contradictions of adolescence. His real-life stars are thoughtful and immature, responsible and confused, in a hurry to grow up and emotionally needy. "American High" reminds you of "My So-Called Life" and "Freaks and Geeks," without the polished dialogue and photogenic actors; it provides confirmation (as if we needed any) that those fictional shows got high school right.

Alas, "American High" doesn't have the freak-show allure of "Big Brother" or MTV's "The Real World," and that's working against the show, ratingswise; it's been getting trounced on Wednesdays by "Big Brother." Which is a shame, because Cutler and his crew aren't putting these kids on display for our titillation, or for us to goof on them. Instead, they've made an earnest, old-fashioned documentary with a purpose -- they're trying to teach viewers something. The kids of "American High" show us that high school isn't like it used to be, despite what many parents believe. The stakes are higher, the competition to get into college tougher; parental pressure to succeed is more intense, yet parental involvement in ways that really matter to kids is pathetically low. "American High" values teens for the fragile, frustrating changelings they are. It reminds you of the courage it takes to get out of bed every day and live an adolescent's life.

If only the producers of "Big Brother," "The Real World" and ABC's "Making the Band" were as protective of their subjects as "American High." Of course, if they were, it would take all the fun out of watching. But three recent instances of disturbingly pathetic behavior on those reality shows lived up to (well, actually, down to) all the disdainful criticism the genre has earned.

On "Big Brother," it was the sight of Brittany, the frighteningly love-starved urchin, trying to pry horndog Josh's attention away from beauty princess Jamie as the latter two lay sunbathing in the backyard. Brittany humiliated herself even more than usual (if you can imagine that), prancing around and around Josh and Jamie, stepping over their supine bodies, twittering like a 10-year-old pest. (She's a 25-year-old pest.) At one point, she ran into the kitchen to fetch a glass of water, which she then took outside and poured on Josh; when he finally sprang up to chase her, she scampered back into the house, happily squealing. Mission accomplished -- he noticed her! I don't think I've been so embarrassed for a TV character since Andy Sipowicz's last bout of hemorrhoids.

Dr. Drew Pinsky, the official "Big Brother" psychologist, assures us that Brittany's "cuddle slut" behavior is perfectly healthy for a grown virgin. Thanks, Doc -- you've given us permission to keep on ridiculing her! Still, it's obvious, the longer "Big Brother" drones on, that Brittany needs some kind of help -- counseling, Ritalin, a night with Deuce Bigalow, something to take the edge off her desperation. At the very least, why doesn't her pseudo-family send her home, for her own good?

And Brittany isn't the only one. Karen is a seriously miserable, unfulfilled woman, complaining about her husband's emotional unavailability, vowing to divorce him, painting him as a potential child abuser, even, all on national TV -- with her kids watching back home. Curtis, the repressed soon-to-be federal prosecutor (he's the male version of Lara Flynn Boyle on "The Practice"), has fessed up to his family's lack of emotional openness with a matter-of-fact, "We're all dead inside," punctuated by one of his patented spasms of nervous braying laughter. And Jordan, the banished stripper, was a lifetime worth of therapy waiting to happen. "Big Brother" is one big unhappy family, a house full of dysfunctional people counting on TV to fix their problems, give them a purpose, shore up their identities. What a cruel joke.

Then there was the depressing "The Real World: New Orleans" episode last month where Melissa (who likes to be "shocking") celebrated her birthday with a night on the town; it pretty much summed up the opportunistic way the series recruits and encourages exhibitionists.

As her visiting boyfriend watched sadly from the audience, Melissa made like a one-woman Mardi Gras on the stage of a rowdy drag club, simulating anal sex, pawing every man in sight, allowing herself to be pawed, flashing her panties at the crowd, dancing on tabletops and slugging back the booze. In short, Melissa made an ass of herself -- no big surprise. But, this time, after seeing love die in her poor boyfriend's eyes, it was hard to laugh at her. (This isn't the first time "The Real World" has exploited the consequences of a cast member's ill-considered behavior for dramatic effect. In the Honolulu series, Ruthie's drinking problem was a reality-series producer's answered prayer. And in the current series, Mormon waif Julie has been suspended from Brigham Young University for violating the school's code of student conduct by appearing on the show.)

And on the Aug. 4 episode of "Making the Band" (a show from the producers of "The Real World" about the creation of an 'N Sync-wannabe boy band), band member Ikaika quit the group under what sure looked like emotional duress. The brooding, unworldly Hawaii native has thrown his share of attention-grabbing work stoppages before; nearly every episode has had its Ikaika Moment, where he'd tell anybody who'd listen about how lonely he was away from home and how cut off he felt from the other boys, a single tear running down his darkly chiseled cheek. But in this episode, Ikaika's hulking older brother (who had flown in from Hawaii) lurked menacingly in most scenes; we learn that he made outrageous demands of band manager Lou Pearlman (he wanted to be put on the payroll as his brother's bodyguard) that could be interpreted as shakedown attempts. At the end of the episode, Ikaika's announcement that he was leaving the band was punctuated by his brother's terse statement that "Ikaika has been recalled by the family."

If "Making the Band" is for real, then Ikaika could be in psychological, if not physical, danger. As for Brittany and Melissa, they're definitely screwed up. But, they're all over 18 and, technically, responsible for their actions -- even if their actions amount to self-destructing on national TV for America's amusement. These reality shows, after all, are not billed as therapy sessions, cautionary tales or Psych 101 classes, they're billed as entertainment. The producers and networks are not obligated to care. But, ethically, shouldn't someone?